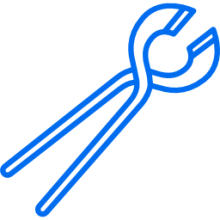 End cutting pliers (or nippers) are designed to perform flush cuts of soft wire and are frequently used to extract smallish nails (Source).

Some buyers use them just for pulling nails, while others use them to cut hard-to-reach nails, nipping off the edges of metal pieces, cutting cable ties, and home remodeling tasks (GarageJournal).

One of our favorites is the Stanley 6.5" MaxSteel End Cutting Pliers- they are drop-forged from high-carbon steel and are designed for performing flush cuts of soft wire, or pulling out smaller-grade nails.

Stanley Tools says that, according to their research, these specialized edges are engineered to decrease cutting effort by 45%, and boost the nipper's edge life by up to 33%.

Let's take a look at 5 of the best-selling end cutting pliers on the market and see how they compare.

These end nipper pliers offered by Tekton are well-made, efficient, comfortable to hold and practical. Users love the price and quality, but some do note that they are manufactured in China.

These end nippers measure 8” x 2.2” x 1.2”, and they feature twin induction-hardened blades for improved performance, non-slip grips for comfort and a weight of 12.8 ounces. The 8-inch end pliers are made from high-strength chrome vanadium steel, and they are suitable for copper, aluminum, or soft steel wire in the following forms: solid, stranded and braided.

A buyer comments that these end cutting pliers are the perfect addition to his enormous tool collection and that they are ideal for removing siding nails. The reviewer says that they are sharp, well made and affordable.

He highly recommends them as one of the best end pliers available. Another customer shares that he uses the end pliers for prying and removing old nails and that he doesn’t have any complaints. He adds that the pliers are light and that they cut electrical wire or zipping ties quickly and smoothly. 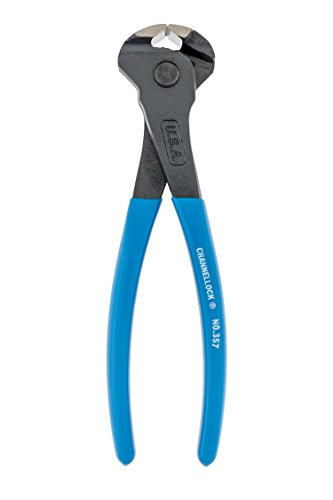 These 7.5-inch end cutting pliers offered by Channellock are handy, precise, sharp and practical for any professional. Users love that the pliers are efficient and well-balanced, but some do note that they are expensive.

These end nippers measure 9.2” x 2.9” x 1”, and they feature laser heat-treated cutting edges for durability, high carbon drop forged steel construction for improved performance, and a unique coat that prevents them from rusting. They also have blue comfortable grips and a weight of 9.6 ounces. The Channellock 7.5-inch nippers are made in the USA.

A customer shares that he uses these end cutting pliers every day and that they remove all types of nails quickly and safely. The reviewer adds that the pliers fit well in his tool pouch and that they are perfect for every carpenter. Another user mentions that the nippers don’t rust after the protection coat wears off and that he is extremely impressed with their quality.

He recommends them to anyone searching for the best end cutting pliers. A purchaser also shares that the Channellock nippers are better than all other brands and that they are a necessity for every handyman. However, a customer has complained that the pliers are heavy and that it’s difficult to work with them.

Another reviewer also says that they shatter on the first nail and that he is very disappointed.

If you are looking for end nippers of high-quality and design, you might take a look at these 6.5-inch end cutting pliers offered by Stanley. Users love the price and the sturdy construction, but some do note that they received a defective product.

These nippers measure 9” x 3.3” x 0.8”, and they are made of high carbon drop forged steel for extra durability. They feature induction-hardened cutting edges, and they reduce cutting effort by 45 % and they have a 33 % longer cutting edge life. The Stanley end cutting pliers meet or exceed ANSI standards, and they are suitable for flush cutting soft wire or pulling small nails and brads.

A purchaser shares that the grips feel more comfortable in his hands than he expected and that it’s perfect for pulling finish nails. The reviewer adds that he uses the Stanley nippers regularly to cut hard to reach nail and that he highly recommends them as the best nippers available.

Another satisfied user mentions that these cutting pliers are strong, well-made and affordable and that they would last for years. A buyer also comments that these end cutting pliers work perfectly and that Stanley always offers high-quality tools. However, some customers have complained that the pliers broke quickly after they bought them.

A user complains that he bought three pairs of pliers and that all of them got chipped a couple of days later.

These 14-inch heavy-duty end cutting pliers offered by Apex Tool are well-balanced, strong, sturdy and useful for large wires and nails. Users love that the pliers are sharp, but some do note that they are not suitable for nails that are flush with the surface.

These end nippers measure 1.5” x 4” x 17”, and they have a lightweight design to decrease hand fatigue and a weight of 2.1 pounds. They are made from drop-forged alloy steel, and they feature electronically induction hardened cutting edges for improved cutting performance, a polished head with a black finish, and heat-treated handles and jaws.

In general, users have a high opinion of the Apex crescent end nippers, and they praise their performance, sharpness, and design. A buyer comments that these nippers will cut through the toughest nails and that they proved excellent leverage thanks to their length.

The reviewer adds that he recommends them as the best end nippers ever invented. Another customer shares that he uses them to clip his horse’s hooves and that the pliers work great. He states that the nippers would last for years and that they are excellent for removing nails in hard to reach areas.

However, some customers have complained that it takes too much effort to cut through nails and the nippers got chipped quickly. Some users also say that they are not suitable for hard to cut nails. 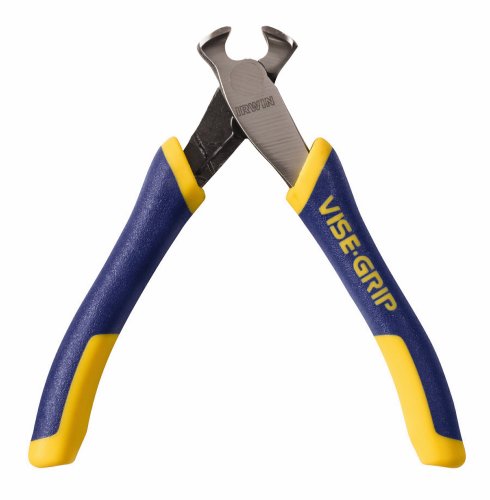 These 4 ¼-inch end cutting nippers offered by Irwin are practical, comfortable to use, sharp and suitable for every handyman. Users love that the pliers cut smoothly, but some do note that they are overpriced.

These end nippers measure 7.1 x 3.2 x 1 inches, and they are made of nickel chromium steel for extra durability and longevity. They feature spring-loaded action to reduce hand fatigue, ProTouch grips for extra comfort, induction hardened cutting edges and a weight of 2.2 ounces. These cutting pliers also have a wide throat clearance that allows you to cut semi-flush nails and rivets.

A buyer commented that he was surprised by the quality of the Irwin end nippers and that they would cut through both hard and soft metals. The reviewer adds that he has used them on steel cables, plastic ties, and electric wires and they don’t show any signs of chipping.

Another customer mentions that these end cutting pliers have become part of his toolkit and that they are perfect for small cuts. A happy user shares that he used them to cut 18 gauge stainless wires and that he encountered no problems. The purchaser also says that the grip is very comfortable and that he highly recommends them to any professional.

However, some customers have complained that the pliers are not suitable for pulling frets because they have large bevels.

The first pair of end cutting pliers we examined were the 6 and 8-inch Tekton option. The manufacturers advertise their nipper pliers as equipped to deal with aluminum, copper, as well as softer steel wires that are either braided, stranded or solid.

The third pair of end nipper tools we looked at was the StanleyMax steel 6.5-inch plier. The manufacturers say that it is built from high-carbon steel and their research has demonstrated that its proprietary build has decreased the effort it takes to make a cut by 45% and its edge sharpness life has been boosted by 33%.

The fourth pair of heavy duty nippers we examined is produced by the Apex Tool Group who advertises it as a lightweight, but strong, option for rugged construction site use. It's built from drop-forged steel and features induction-hardened cutting edges, all polished to an attractive black finish.

The last option we looked at was the Irwin Tools end nippers- they are a nickel chromium built, spring-loaded nail cutter tool. One Irwin Tools buyer we spoke with recommended them because the blade edges are effectively hardened for long-term use, the perpendicular orientation of the blades provides clean cuts, the handles are comfortable to use and the cutting force is solid.