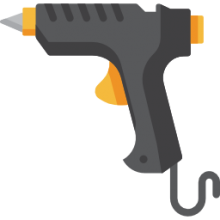 Powered caulk guns (battery or pneumatic) simplify caulking- an indispensable solution if you have a large weatherizing or home-repair project to complete (Source).

They'll dispense caulk or sealant with just a pull of the trigger- a superior method than hard-squeezing caulk from a manual caulk gun (Source).

Also known as powered adhesive guns, they are powerful enough to work with high-viscosity materials like automotive urethane.

Some are battery powered (the Ryobi, DeWalt and Milwaukee), while others (Campbell Hausfield & Astro Pneumatic) are powered by air compressors.

The battery-powered, cordless Milwaukee Caulk Gun ships with a battery and charger (unlike other options we examined).

The 2.6 lb Campbell Hausfield pneumatic caulk gun weighs the least at 2.6 lbs, while the DeWalt weighs the most at 5.9 lbs, but supplies the greatest push force of the electric options at 650 lbs. 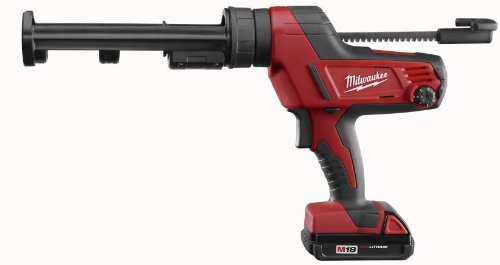 Let's take a look at 5 of the best-selling air and electric caulking guns on the market and see how they compare. 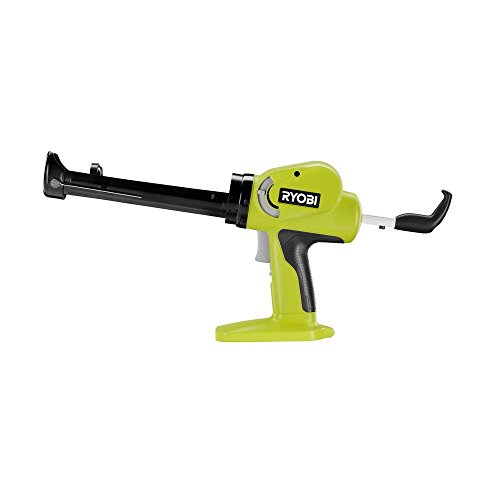 This battery caulk gun offered by Ryobi is an effective option for someone who needs a power caulk and adhesive gun. Users love that efficiency and accuracy of this hand saver tool, but complain about the heaviness and a design flaw which causes the caulk to leak and make a mess all over the push-rod end.

This product features over 500 lbs. of push force which is great because it allows you to handle higher viscosity material with ease. Another good feature is a variable speed selector that lets the user adjust the discharge rate to control the bead of caulk. This power caulk gun seems like a good choice if you are looking for an efficient electric caulk gun with a switch lock which helps prevent accidental start-up.

The general user consensus concerning the Ryobi power caulk gun is that it is a quality item and easier to use than a conventional tool. Buyers state that this portable caulk gun is easy to use and great for large caulk jobs, especially ones with heavy caulk. They continue with saying that the tool is very efficient and accurate, which saves you in the long run on adhesive expense. One happy purchaser shares that this is a very durable tool that runs on existing batteries more than long enough to do pretty much any caulking job.

However, buyers complain about several issues. One – the tool is somewhat heavy. Two – it can be hard to control to do a good looking visible bead. And last but not the least – the caulk gun is prone to blow out the end of the caulk tube, which causes the caulk to come out the back side of the tube gumming up the insides and gets a mess all over the push-rod end. 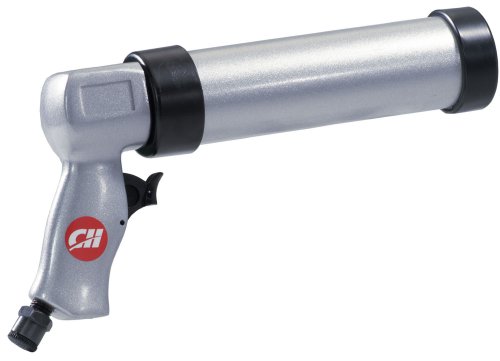 This air powered caulk gun offered by Campbell Hausfeld is a good option for someone who needs a caulk gun for precise dispensing of a wide variety of materials. Users like its performance, but do complain about the design of the trigger and heaviness of the tool.

This product is an air driven caulk gun that uses standard cartridges for smoothly dispensing material such as caulk, adhesives and sealants. It features an easy to operate shut-off valve that stops material when the trigger is released which is great because it allows accurate flow-control. This caulk tool might be a solid choice if you are looking for a caulk gun which is durable and reliable.

In general, users have a favorable opinion of the Campbell Hausfeld air powered caulk gun. They praise its quality, speed, flexibility and reliability. One satisfied purchaser says that this item is very durable and that it outlasted every other caulk gun that he’s ever owned.

However, buyers complain about the design flaw of the trigger. Many users share that because of the placement of the trigger your finger is likely to get pinched many times when you are caulking. One reviewer adds that you need a compressor for this caulk gun and since it will eventually be attached to an air hose its range can be limited. He also says that the tool is a little heavy. 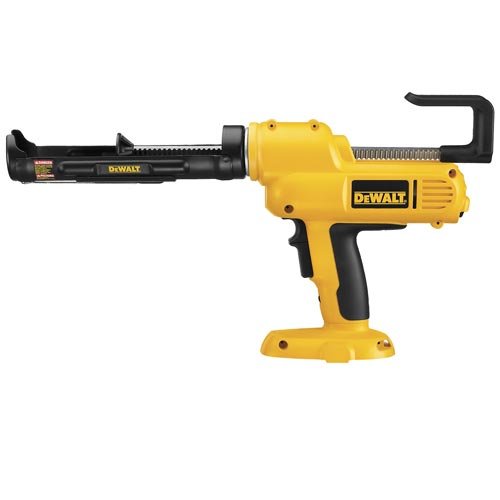 This cordless caulk gun offered by DEWALT is a solid choice if you are looking for an adhesive 360 degree rotatable dispenser. Users like its usefulness and efficiency, but do complain about bad adjustment range of dispensing speed.

This product delivers up to 650 pounds pushing force which is enough for dispensing the highest viscosity adhesives and sealants. It features auto-reverse function which helps reduce drips, waste, and clean-up. Another useful feature is variable speed control which provides consistent flow rates and bead control.

In general, buyers are satisfied with the DEWALT cordless caulk gun and they praise its efficiency. They agree that it is an excellent value for the money. One buyer finds the ability to stop the flow of caulk when you are done with a bead especially helpful. Another user adds that the item works great for large jobs.

However, buyers are unanimous that the caulking rate is too high at lowest speed. This design flaw causes the tool to put out adhesive too fast. One purchaser states that it takes practice to get the right technique. He adds that DEWALT cordless caulk gun is a bit heavy. 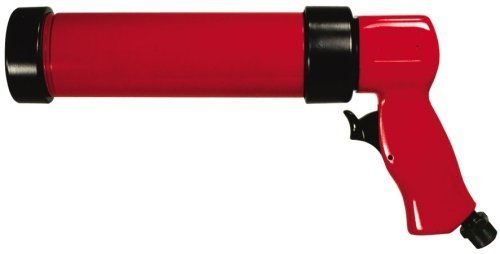 If you are looking for a top-rated caulk gun you might want to consider this air powered caulk gun offered by Astro Pneumatic Tool. Users love its construction and performance, but some complain about the size and certain problems with the trigger.

This air-driven caulk tool permits smooth flow caulking. It can be used for dispensing caulk, adhesives, and sealants from a standard cartridge. If you are looking for a pneumatic caulk gun, this might be a good pick.

In general, users have a high opinion of this pneumatic air powered caulking gun, and they find it to be a must-have for the handyman. Moreover, they praise its solid metal construction. One happy purchaser comments that this caulk gun doesn’t use much air so a small compressor will work perfectly.

However, several purchasers complain about the trigger. One of them experienced the trigger return spring snap. Another one states that the trigger is too small and caulk continues to come out after it’s released and even after air pressure is removed. 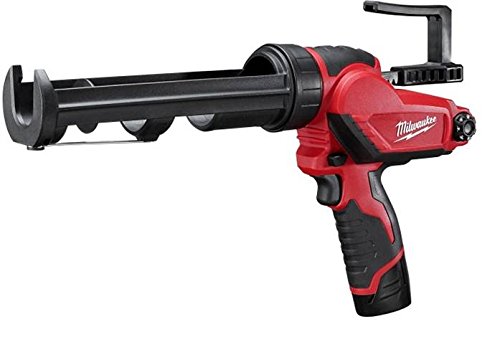 If you are looking for a power caulk gun, you might want to consider this compact cordless powered caulk gun offered by Milwaukee. Users love this time saver which allows you to caulk faster and more accurately, but do complain about the heaviness of the tool when used for longer periods of time.

This product features variable speed trigger and maximum speed dial which is great because it allows for total application speed control. Other good features are auto-reversing anti-drip, a seal puncture tool and a durable hang hook for versatility on the job. If you are looking for a 360 degree Rotating collar caulk gun that easily dispenses everyday construction sealants and adhesives, this might be a good option.

In general, users have a favorable opinion of this Milwaukee caulk gun. What they love about it is that it makes caulking look professional and so much easier. They praise the retract function that leaves hardly anything to clean up after working. Another good thing that users emphasize is that this caulk gun gives good adjustable control of dispensing caulk, for different travel speed and/or viscosity of the product that you’re using.

However, some buyers complain this unit is heavier than a manual caulk gun and not that suitable for larger jobs because it gets tiresome to hold it. One reviewer adds that the assembly of the tool is a bit difficult.

The first power caulk adhesive gun we examined is manufactured by Ryobi- it's the P310G. The manufacturers advertise it as a variable speed option that supplies well over 500 pounds of push force- ideal for dealing with higher viscosity materials.

It's center-balanced, heightening ease of use while employing a plunger rod tool set enabling users to hook and swap tubes. Many users pair them with portable work stands- providing a great surface area. A battery-powered option, this 18 V power caulk gun can work through 200 tubes of caulk on one charge.

The second air-power caulk gun we looked at is manufactured by Campbell Hausfield- it's the PL155800 AV. The manufactures say that it is capable of dispensing 10.1 fluid ounces, employing an intuitive shut off valve system that features a flow-control trigger.

The manufacturer also advertises this as a means of simplifying caulking projects- easily dispensing the material and utilizing a sensitive trigger to quickly stop the flow whenever the trigger is released.

As a handy DIY maintenance tool, it can dispense adhesive, sealant and caulk, great for sealing bathtubs, windows and other drafty areas around the home.

The third electric-powered adhesive dispenser we examined is manufactured by a DeWalt- it's the Bare Tool DC545B. It's advertised as providing up to 650 pounds of pushing force, capable of dispensing really high viscosity sealants and adhesives with a variable speed trigger control that provides consistent bead control and flow rates. Batteries and charger are sold separately- so make sure you purchase those at check out.

One reviewer said that it is a solidly constructed unit that ships with poor instructions, though it takes some practice to get it operating effectively.

Another criticism is that even when adjusted to its lowest speed setting, some users complain that it will output 6 to 8 in./s, which means that if you're looking to get a quarter inch or smaller amount of bead, you'll have to move fast.

The fourth option we examined it is manufactured by Astro Pneumatic Tools- it is their air powered caulking gun. Buyers say they have used it to dispense things like windshield sealer, Vulkem, and Sikaflex.

The last caulk gun kit we examined is the Milwaukee 2441-21, 10 ounce option. A compact and cordless battery-powered caulking gun, it includes a variable speed trigger with a dial flow application speed control powered by a lithium battery.

It can supply up to 400 pounds of pushing force- helpfully dispensing a variety of different types of adhesives and sealants with an auto-reversing anti-drip. It does ship it with a battery and charger- unlike other options that require you to purchase them separately.