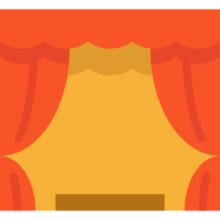 The two primary benefits of these heavy-duty shower curtains are that their added weight prevents annoying billowing while showering and they are generally engineered to be more mildew and bacteria-resistant (Source).

A shower curtain's thickness is denoted by different 'gauges'. A lower-numbered gauge like a 3 is relatively thin and flimsy, while a 15 is built for commercial purposes (Source).

How To Prevent Shower Curtain Mold

Some of the rugged shower curtain liners function as standalone shower curtains- the distinction can be a bit muddled, from what we've seen. Ghooss has a variety of 10-gauge colored options, while the majority are generally white, opaque or totally clear (Source).

In terms of sizing, for the most part they all measure around 70" X 70". The Wimaha curtain has the highest gauge at 15, with the rest being 10 gauge, except for the Clean Healthy living curtain, which doesn't have an indicated gauge. 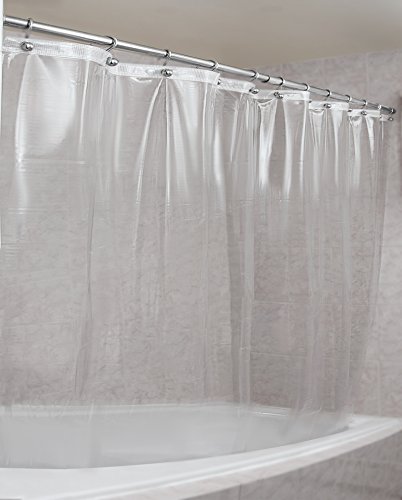 Buyers we spoke with told us that while a thick and rugged shower curtain, the Epica still hangs and slides easily. It has a quality feel and the reinforced grommets are strong.

For the most part, buyers say it doesn't emit a chemical odor out of the box. Homeowners told us, as well, that while all shower curtains will eventually collect bacteria, mold and soap scum, you can just toss it in a washing machine to scour it clean.

A strong curtain, it's held up for a long time, reviewers say. There are some other options available, but the Epica has received the best feedback, on average, from the users we spoke with concerning its durability, feel, and resistance to gross bathroom growths. 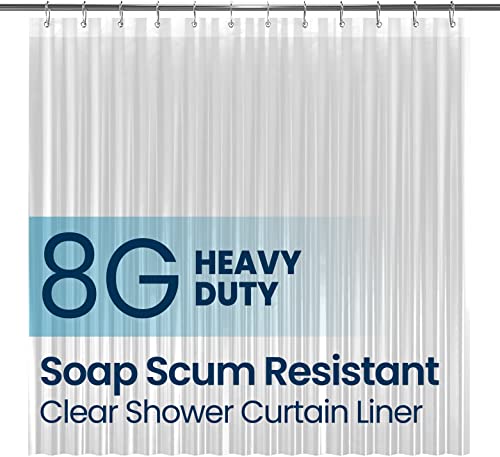 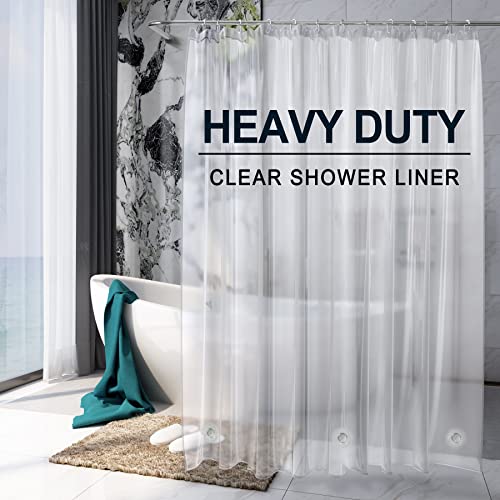 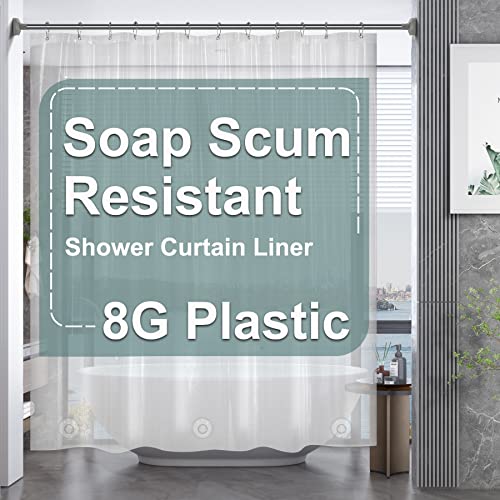 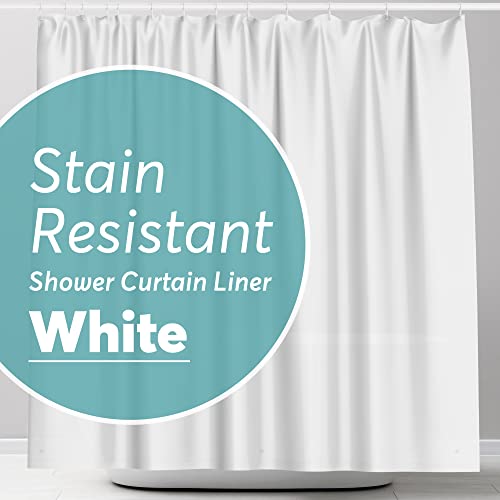 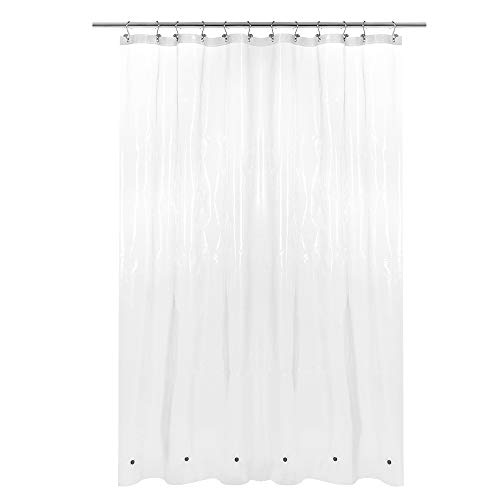 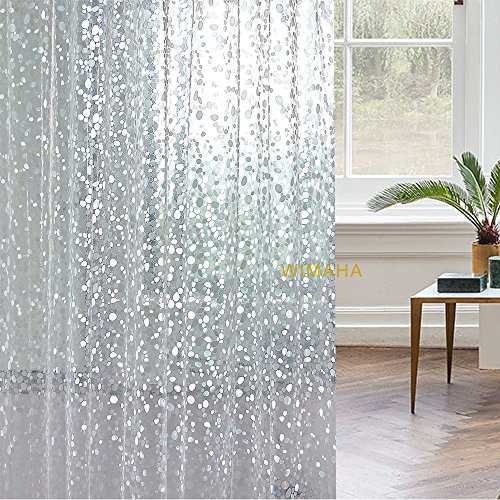 This 15-gauge shower curtain offered by Wimaha is well-made, easy to clean, safe and practical. Users love the lovely colors, but some do note that it’s not as thick as they expected. The premium heavy-duty shower curtain measures 72”x 72”, and it’s made from the eco-friendly material EVA which is non-toxic, chlorine-free, and odorless.

The curtain is also mold and mildew resistant, which is great because you don’t have to worry about bacteria. Moreover, it has a surface with intaglio touching features, and it’s waterproofed. The package also includes 12 rust-proofed metal grommets and a warranty card.

A reviewer says that this is the best shower curtain that he has ever owned and that it stays firmly in place even if your bathroom door is open. The user also states that there is no odor present and that the curtain dries fast.

Another buyer comments that the clear shower curtain is soft, flexible, and the customer service is exceptional. He highly recommends it as the best nontoxic shower curtain. A purchaser adds that it’s easy to install the hooks and that the shower liner is made of high-quality material that really repels mold.

However, some customers have complained that the curtain is not heavy enough and that it billows and clings to your body. Some users also note that there are no magnets to secure the curtain to the floor and that the shower liner is not actually 15-gauge thick. 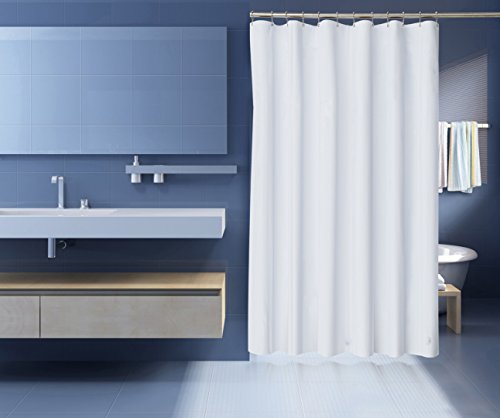 This premium shower curtain liner offered by Zen Fresh is stylish, easy to hang, and an excellent choice for protecting your privacy. Users love the thickness of the material, but some do note that the curtain gets dirty very quickly.

The Zen Fresh shower liner measures 72” x 72”, and it features a PVC-free design, a surface coated with an anti-mildew material, and three bottom magnets to keep the curtain in place. Moreover, the shower curtain is 10-gauge thick, and it’s non-toxic, odorless and eco-friendly. The package also includes rust-resistant grommets that slide easily, but it doesn’t contain any shower rings.

A user comments that the shower curtain is thick and well-made and that it doesn’t smell at all. He adds that after five months there is no sign of mold or mildew and that he highly recommends the Zen shower liner. Another buyer shares that the 72-inch curtain hangs straight and that it doesn’t billow around you while you shower.

A user also states that the quality is top-notched and that you can’t find a better shower curtain liner. The reviewer says that it’s easy to clean the curtain and that the water stays in the shower area.

However, some customers have complained that the magnets are not strong enough to keep the PEVA shower liner in place and that it’s not really mildew resistant. Some users also note that the holes are too small to fit the shower rings.

If you are looking for a heavy-duty shower curtain for your bathroom, you might take a look at this shower liner offered by Epica. Users love the price and the quality of the material, but some do note that there is a smell present.

The Epica heavy-duty curtain measures 72” x 72”, and it features 10-gauge thick vinyl design that doesn’t require magnets, easy to clean surface, reinforced nylon mesh header, and rust-proof metal grommets. Another great thing about the shower liner is that it has a protective lining against bacteria, mold, and mildew, and it comes with a 2-year warranty.

A customer comments that he is very pleased with the heavy-duty shower liner and that after seven months there is no sign of mold or mildew.

He says that the Epica shower curtain is thick and there are no unpleasant odors. Another buyer mentions that you can toss the curtain in the washing machine when it gets dirty and that it’s made of quality material that will last for years. The reviewer also states that the grommets are strong and well-made and that curtain stays in place with no issues.

A purchaser adds that the liner lets enough light in the shower cabin and that it’s the best heavy-duty shower curtain available. However, some customers have complained that the curtain is not mildew resistant and that it started to collect mold after a couple of months. Some users also note that the curtain they received wasn’t 72 inches long. 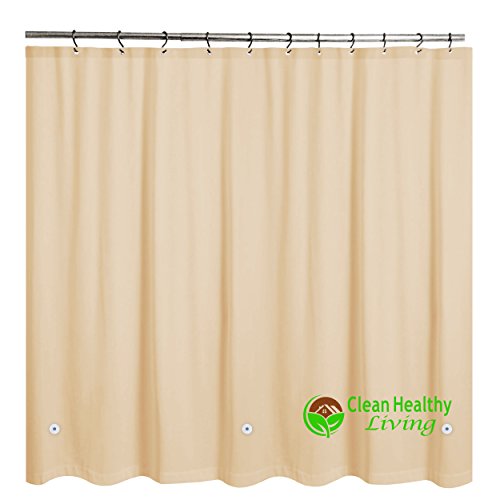 This heavy-duty shower curtain offered by Clean Healthy Living is durable, thick, eco-friendly and washable. Users love that the curtain has no unpleasant odor, but some do note that it’s manufactured in China.

The shower liner measures 70” x 71”, and it’s made of 100% PETA material with no PVC or BPA. The heavy-duty shower curtain is washable, non-toxic, odorless, and it has mildew & mold resistant surface and a weight of 25 ounces. Another great thing is that the package contains 12 metal grommets, three bottom magnets, four suction cups to keep the curtain in place.

As a whole, buyers have a high opinion of the Clean Healthy heavy-duty shower liner, and they praise its thickness, design, and quality. A purchaser comments that he has been using the weighted curtain for about a year and that it still looks as new. He highly recommends it as the best heavy-duty shower curtain with suction cups.

Another user mentions that the liner is very thick, hangs nicely, keeps the water in the bathtub, and it’s easy to clean it with a cloth. A purchaser adds that the PEVA heavy-duty shower liner with magnets arrived quickly and in an excellent condition and that you can hardly find a better curtain for your bathroom.

However, some customers have complained that the curtain doesn’t stay in place and that the magnets are not strong enough to do the job.

If you’re searching for a cheap heavy-duty shower liner, you might consider this 10 –gauge curtain offered by United Linen. Users love the elegant design, but some do note that the curtain is manufactured in China.

The United Linens shower curtain measures 70” x 72” with a weight of 1.1 pounds, and it’s made of luxurious faux vinyl fabric which is eco-friendly and chemical-free. The curtain also has mildew-free and mold resistant surface so that you don’t have to worry about bacteria and you can choose from several available colors. Moreover, the package includes metal rust-proofed grommets.

A buyer comments that the shower curtain liner arrived well-packed and that there was no smell when he opened the box. He also says that the color matches the provided picture and that the curtain feels thick and soft.

Another customer mentions that the grommets are well-made and that they secure the curtain with no issues. The reviewer adds that it looks very stylish in her bathroom and that she highly recommends it. A user also states that she is amazed by the quality of the United Linen heavy-duty curtain and that she hasn’t had any problems with it.

However, some customers have complained that the heavy-duty shower liner arrived dirty and that it was already covered in mold. They don’t recommend it as a mildew-resistant shower curtain. Some also note that the curtain smells and that it’s not very thick.

Some old favorites are listed below- use our comparison table at the top of the page for up-to-date recommendations.

If the thickness of your shower curtain liner is important to you, you should understand that the thicker the liner is, the longer lasting and more rugged it will be.

You should be aware, as well, that if you purchase a heavy-duty, thick shower curtain, it does become a bit more difficult for homeowners to install and maneuver them on the shower rod.

The 10 gauge is the most rugged and tough option that is frequently used in commercial environments and facilities.

The first heavy-duty shower liner we examined is the 15 gauge Wimaha clear curtain. This anti-bacterial and mildew resistant shower liner is engineered to fight off the growth of disgusting bacteria.

The third option we examined is the Epica 10 gauge shower curtain liner. This mildew-resistant shower curtain is engineered to fight off the growth of disgusting mold, bacteria, and other gross bathroom growths.

In addition, its vinyl surface has been built to resist collecting soap scum and hard water marks, those embarrassing blemishes that can make your bathroom look grimy and grungy. Because it is a 10 gauge option, designed to be durable and strong, the manufacturer says that it is especially resistant to billowing, tearing and ripping, with a clear and clean minimalistic appearance.

The fourth heavy duty shower curtain liner we examined is manufactured by Clean Healthy Living- it is tan in color and measures 70" x 71" long. It's 100% polyethylene vinyl acetate (PVA) and weighs 25 ounces- designed to resist mold while remaining odorless and resistant to blowing about. It ships with 12 metal grommets so get some grommet pliers.

Buyers were impressed at its thickness saying that it functions effectively as a water barrier in an eco-friendly manner- though a bit more expensive than other options we examined.

The last heavy-duty shower curtain liner we examined is manufactured by United Linens. It actually comes in a variety of colors including black, gold, white, peach, yellow, brown and royal blue. It ships with rust proof metal grommets and it's manufactured from 100% microfiber, a 10 gauge heavy-weighted vinyl option.