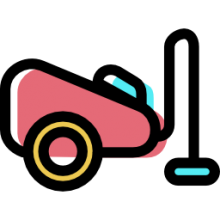 Many homeowners opt to purchase a lightweight, auto-feeding drain cleaner like the Ridgid K-30 because it quickly pays for itself unclogging nasty debris from home sinks rather than calling in a plumber for several hundred bucks (Source).

If you need to clear out root blockages, you'll need something more powerful, like the 215 lb. Cobra Products drain cleaning machine.

It's important to note that while these drain cleaners are advertised as 'electric', you'll still have to manually feed the hose into the drain, with kinking issues on retraction being a notable difficulty.

The 11 lb. Ridgid 34963 is best for light, residential use- dealing with debris clogs in bathroom sinks and tubs and potentially clearing out kitchen sink clogs as long as the line is not too long.

It's the lightest option, while the wheeled Cobra Products drain cleaning machine is the heaviest at 215 lbs, and is a significantly more powerful option. It's engineered to clean out 4" to 10" diameter lines- specifically intended for sewer lines, main drains, and handling root blockages.

​The Cobra Drain cleaning machine can deal with the largest diameter pipes- 4" to 10", while the other options max out at 4" pipes (check the comparison table below for more info).

The Cobra electric drain cleaner ships with a 3/4" x 100' slotted end cable as well as a 4 piece cutter set. 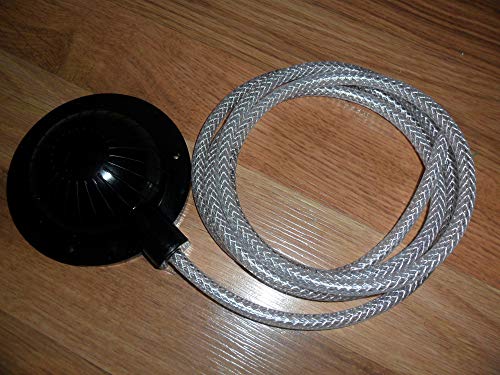 Its 3/4 HP motor includes a forward-off-reverse switch as well as a manual thermal overload protector switch. It's designed to clean out 4" to 10" lines and is indicated for use on sewer lines main drains, and root blockages.

This drain cleaning machine offered by Ridgid is powerful, well-built, and suitable for drain cleaners and plumbers. Users love the retractable handle for easy maneuvering, but some do note there is no auto feed.

The Ridgid drain machine measures 36” x 36” x 36”, and it features a sleek profile, a cart system of transport, a C-32 3/8-inch x 75-foot integral wound solid core cable, which is ideal both for slop sinks and kitchen sinks, and a weight of 65 pounds. Another great thing about this machine is that it features a cable control system that stops the drum from spinning when the blade gets stuck.

If you are searching for a way to clear clogged sinks, you might take a look at this sink drain machine offered by Ridgid. Users love the auto feed control that keeps your hands clean, but some do note that there are no color strips to indicate how much cable you have fed into the drain.

The Ridgid drain cleaning machine measures 10” x 17” x 11”, and it features a single phase motor which is CSA approved, aluminum paddles for 20% faster advance of the cable, a 30-feet of 1/4-inch cable, and a weight of 11 pounds. Another great thing about this machine is that it doesn’t require too much set up and there is on/off foot switch.

A reviewer comments that he used the Ridgid cleaning machine to clear a bogged kitchen drain and that it worked far better than he expected. He advises that you read the instructions carefully and watch some YouTube videos to avoid making mistakes. Another buyer observes that the machine drains fast and efficiently and that it’s very easy to use it thanks to the simple design.

He adds that it took him less than 10 minutes to clean his sink drain and that he highly recommends it. A user also shares that the machine is well-built and that it’s of invaluable help in a difficult situation. However, some customers have said that they find the drain machine hard to use and that they had issues with the cable. 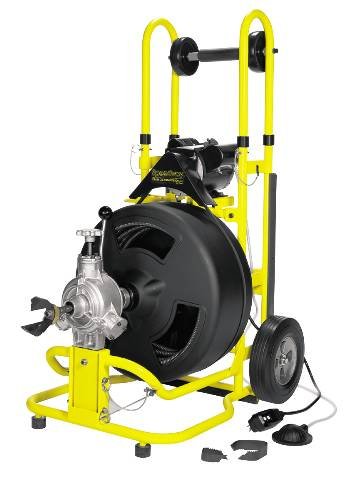 This drain cleaning machine offered by Cobra is powerful, heavy-duty, and suitable for main drains, sewer lines, and root blocks. Users love the wheels for easy loading and unloading, but some do note that they have cable issues.

The Cobra drain machine measures  31” x 24” x 36”, and it features a 3/4 capacitor motor with a forward/off/reverse switch, a manual thermal overload protector switch, a weight of 215 pounds, and a  3/4 inch x 100′ slotted end cable. Another great thing about this machine is that you can use it for cleaning four to ten-inch lines.

An online reviewer mentions that he is very impressed with the quality of the Cobra Products drain machine and that it’s one of the best options for cleaning bogged sinks or drains. He adds that the machine works efficiently and that he highly recommends it.

Another buyer comments that he is very happy with his purchase and that the cleaning machine is very easy to figure out. He says that he was surprised by the heavy-duty material and that he expects that the machine will last for years. A user also notes that after 12 months, he still doesn’t have any issues with the Speedway drum drain machine and that it works just like he expected.

However, a customer has said that the cable feed gear stopped working after a couple of drains and that he can’t find replacement parts. Another purchaser also complains that the cable is hard to untangle. 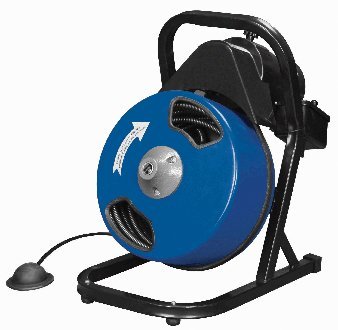 This electric drain cleaning machine offered by Pacific Hydrostar is affordable, easy to store, and well-designed. Users love the 1/2″ x 50 ft. wire core cable that is tangle-resistant, but some do note that it arrived broken.

The Pacific Hydrostar compact drain cleaner measures  13-1/4″ x 17-1/4″ x 21-1/4″, and it features four interchangeable heads – a spade cutter, a boring bulb cutter,  a1-1/2″ arrow cutter, a 1-1/4″ C-cutter,  a durable steel frame, a 1/3 HP motor, and a weight of 76 pounds. Another great thing about this cleaner is that it features a sealed air-activated foot switch, and it has a built-in GFCI. This compact electric drainer is suitable for pipes from 1″ ID to 4″ ID.

A reviewer shares that this is one of the best compact drain cleaning machine that he has owned and that it’s very easy to figure out how to use it. He highly recommends it to anyone who needs a compact tool to clean his kitchen sink.

Another buyer observes that the drain machine managed to clean a problematic drain with no issues and that he is very impressed with its performance. A user adds that the motor works quietly and that it unclogs sinks fast if you read the instructions carefully. However, some customers have said that the electric drain cleaner broke quickly and that it’s difficult to get cable back into the machine because it gets tangled. 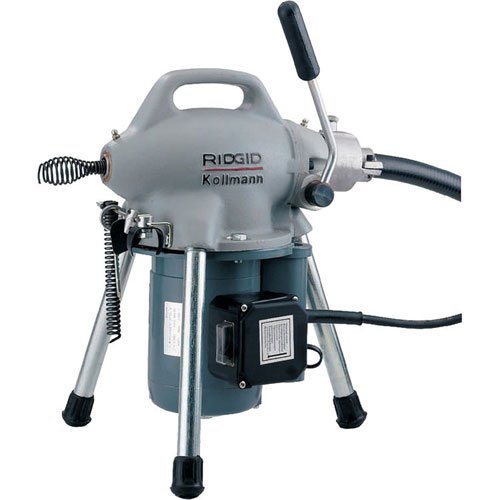 If you are looking for an innovating drain machine, you might consider this sectional drain cleaning machine offered by Ridgid. Users love the unique, instant-acting cable clutch for maximum operator control, but some do note that it’s expensive.

The Ridgid cleaning machine measures 14 x 13 x 18 inches, and it features a weight of 32 pounds, a 300-w reversible motor which is great because it spins the cable with 400 RMP. Another great thing about this machine is that it’s CSA approved, and you can use the following section-type drain cables – 5/16 inch, 3/8-inch and 5/8-inch diameter. However, be aware that they are not included in the package.

A buyer comments that this is one of the best sectional drain cleaning machines for bogged drains and that it works far better that he anticipated at the beginning. He says that he highly recommends it to anyone looking for a compact, easy-to-use drain machine.

Another reviewer observes that the cleaner machine doesn’t have any issues with unclogging sinks, but he is disappointed that he had to purchase the cables separately. A user also notes that the machine arrived quickly and that there were no problems with the package. He states that the drain sink machine matches the provided description and that he doesn’t have any complaints regarding its functionality and performance.

The first drum-style drain cleaning machine we examined is manufactured by Ridgid. It has a 100-foot drum capacity and a 3/8 inch diameter cable designed for professional plumbers, property managers, drain cleaners and corporate janitorial and maintenance professionals.

They say that while it is incapable of removing root blockages, it is engineered to clear out difficult drain blockages in an easy and intuitive way. Contained in a cart, it's built to be highly maneuverable, making it easy to transport to job sites as well as to store. It features a cable control system that causes the drum to cease spinning whenever its blade gets lodged into a blockage- this ensures that the drain snake cable isn't damaged in the process.

As the torque mounts, the drain cleaning machines outer spring will tighten on the wire core, helping to transfer large amounts of torque to the cutter. Buyers tell us that it cleans pipes 8 inches and larger in diameter, doesn't come with an auto feeder, and the cable is 75 feet long.

The second auto cleaning sink machine we examined is another Ridgid drain cleaner. It's advertised as an auto feeding drain cleaning tool with a single phase motor that rotates the cable at 450 revolutions per minute and includes integrated foot bulb activation.

Because it is especially lightweight at only 11 pounds, it is especially portable option and designed with proprietary paddles that the manufacturer describes as advancing cable up to 20% faster than other models.

The third drain cleaning machine we examined is provided by Cobra Products- it ships with a 100-foot slotted end cable as well as a four piece cutter set.

This is a more powerful option and is designed to clean 4-inch to 10-inch diameter lines- particularly useful for sewer lines, main drains and root blockages. Buyers describe it as a particularly heavy duty option that for most users has withstood frequent, rugged use.

Indeed, buyers say that it can withstand heavy operational use, though it is pretty heavy so not incredibly portable, with reviewers saying that in their experience it has lasted up to 18 months before having to replace it.

The fourth electric drain cleaning drum machine we examined is provided by Pacific Hydrostar. It's designed to handle pipes measuring 1-inch to 4-inches in diameter with a 50-foot wire cable designed it to be anti-kink, and tangle.

It does ship with four different interchangeable heads- a spade cutter that is designed to cut through stoppages, and boring bulb cutters that are meant to push through stoppages. The electrical component spins the drum, but you should understand that you actually have to manually insert and withdraw the snake yourself.

The last sectional drain cleaning machine we examined is another Ridgid option- it's marketed as including an instant-acting cable clutch to make it easy for operators to use.

The way it works is that you pull the handle down and the cable spins- whenever you release the handle the cable will immediately stop. It's built with a 300 W reversible motor providing 400 revolutions per minute drain cleaning cable spinning- great for floor drains, showers and sinks.