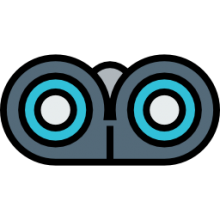 Digital camera binoculars combine binoculars with digital video cameras. They enable you to capture images and video simply by pressing a button (Source).

Digital camera binoculars are marketed to birdwatchers who want to capture video of their birding findings, surveillance professionals, hunters and outdoor enthusiasts as well as those who are enjoying a stadium or sport event at long-distance (Source).

All of the digital camera binoculars have 5 megapixel cameras, except for the Vivitar, which has 8. As well, they all provide 12x magnification, except the Pyrus 10 x 25, which provides 10x.

You will have to purchase your own Micro SD card to go along with the camera because they aren't included.

Resolution isn't super high-def for any of the cameras, but it's not terrible- especially for the hobbyist.

Another thing to be aware of, buyers say that what you see through the binoculars isn't what you see on the screen- there's a bit of an 'offset'. 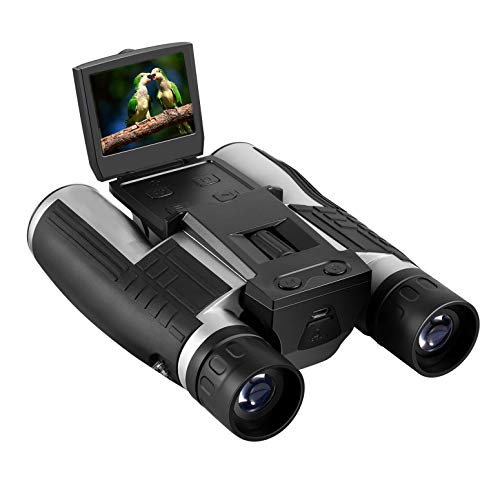 The Eoncore digital camera binocular has a 2" LCD display with a 12x magnification and 32 mm aperture binocular system.

Reviewers we spoke with endorsed their general quality, saying that they provide solid viewing range- all the way out to 200 yards.

In addition, because it has separate lens focus adjustment, you can really optimize for image clarity at long-distances. 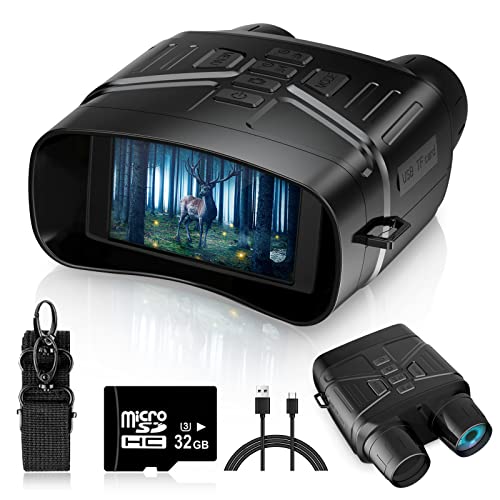 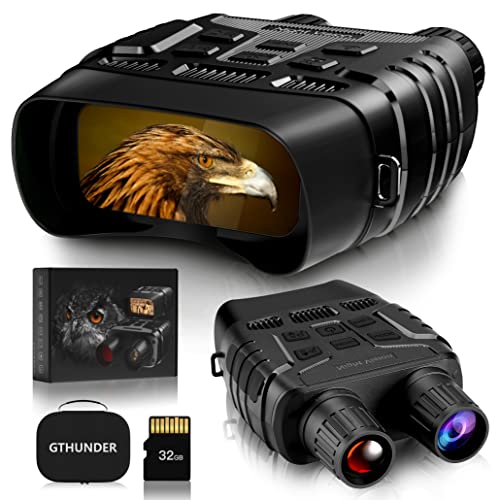 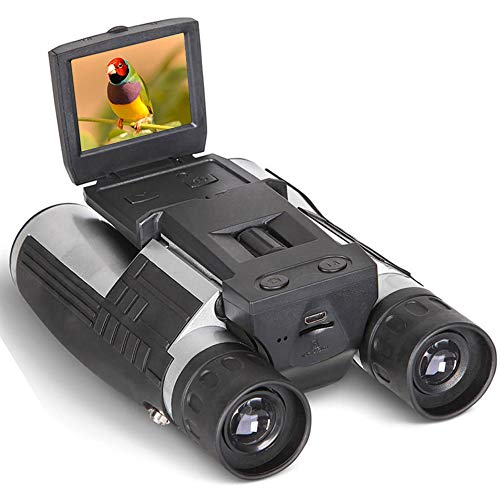 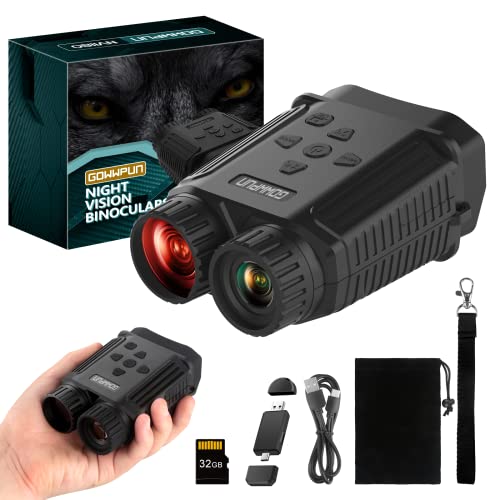 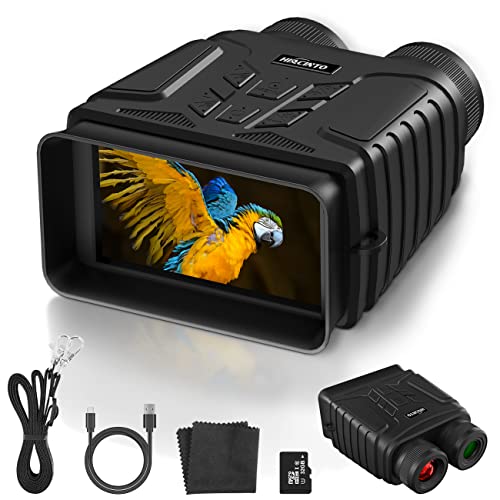 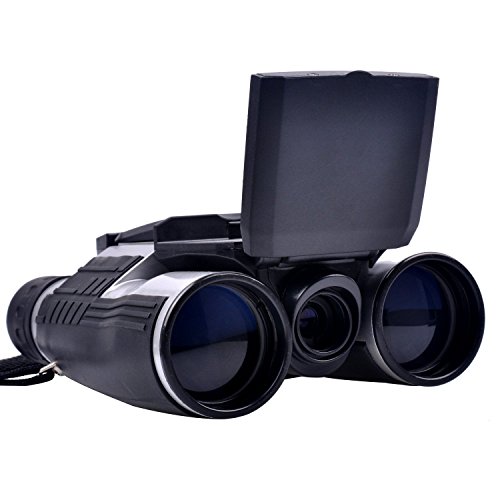 Users love it for providing them with high-definition results. Keep in mind that some might feel some discomfort in properly using it if they happen to wear glasses. The PYRUS LCD Display Digital Camera Binoculars is a good investment to make when going on outdoor adventures or if you want to watch a concert or sports game from afar.

Users of the PYRUS Camera Binoculars have praised the item for giving them the ability to view far away things in high definition. One user of the Digital Handsfree Camera also shared his experience about how he was able to record photos and videos by inserting an SD card in the device. Doing so will allow users to view the captured images later.

A minority of buyers who have used the PYRUS Camera Binoculars with 32mm lens said that the device wasn’t able to focus as well as advertised.

The stylishly designed, portable PowerLead Pxlo Digital Camera Binoculars combines an all-optics binocular system with an HD digital camera. It also has an LDC display that allows the user to quickly control all of the functions offered by the device.

Users love it for being very handy when they are participating in outdoor activities. Keep in mind that using it while wearing glasses can be a bit tough. The Pxlo Digital PowerLead Camera Binoculars is the perfect item to have in order to record outdoor adventures and help with hunting and fishing.

Majority of the FHD Digital PowerLead Camera users praise the device for being very compact in its design and being easy to carry around. One user of the Folding Prism Pxlo Binoculars Camera liked the ability to change camera settings such as lighting type, resolution, anti-shake, etc.

A minority of the PowerLead FHD Camera Binoculars have shared their opinions about the product being too delicate and not focusing properly.

The PowerLead digital camera binocular has a five megapixel camera on it that users compared to the quality of a slightly zoomed, older model handheld digital camera. Video fares a bit better than picture-taking with these digital binoculars, and the video is stored on micro SD cards, as opposed to internal memory. 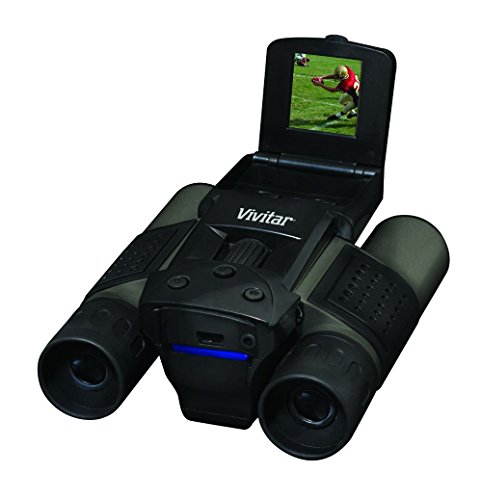 The 12×25 mm Magnification, video-capturing Vivitar 8MP Digital Binocular Camera also provides users with a 4.6 degree angular field of view. It also offers the capability of taking a total of 160 images that are 8 megapixels in nature.

Users like the device for allowing them to view far off sports games in a manner that makes them feel as if they have the front row seats. Take note that the device is not able to record audio. The Vivitar Digital Binocular Camera is an affordable product if a person wants to record videos or take images of faraway objects during outdoor activities.

Users of the 8MP Digital Vivitar Camera have come to a consensus that is merely an ‘average’ product. One user of the Vivitar Binocular Camera shared his experience- According to him the product doesn’t deliver much compared to other similar products in the market.

It is good considering the price but it isn’t something that he would recommend. Another user of the Digital Binocular Vivitar Camera said that the software given with the product wouldn’t install. 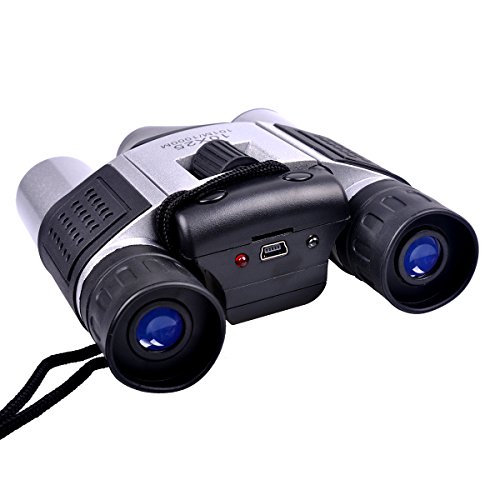 With an objective lens that is 25mm in diameter, and offering 1.3 million effective pixels the Pyrus Digital Camera Binoculars also provides users with a telescope range that is 3m, and a fixed focus range that is 50m.

It also has a USB 2.0 interface and TF card memory expansion. Keep in mind that you can only focus the right lens. Users love it for being lightweight, stylish, and easy to carry around wherever they go. The 1.3MP PYRUS Digital Camera Binoculars is an item everyone should have when they want to see nature up close or if they want to feel closer to a sports game or a concert.

Users of the PYRUS Camera Binoculars Video Recording have reached a consensus that is pretty positive.

One user of the 1.3 MP CMOS PYRUS Binocular Camera shared that he was able to capture high-quality images and record high-quality videos through the product. He also found the manual to be quite useful and full of relevant illustrations. A minority of the PYRUS Digital 10×25 Video Recording Binoculars users said that they couldn’t capture good quality images. 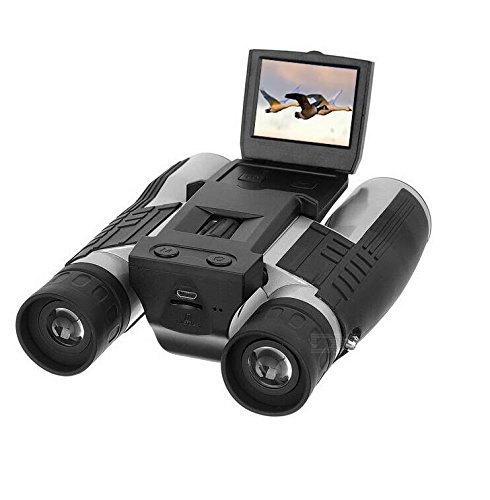 The elegant looking Eoncore 2’’ Digital Camera also features an LCD display that allows the user to access all of the functions offered with relative ease. It also combines an excellent all-optics binocular system with an HD video camera.

The users love the 12x magnification -32mm aperture. Keep in mind that it won’t work properly during the evening. The 12×32 5MP Video Photo Eoncore 2” Recorder is the perfect device to have when going out to experience being close to nature as well as for watching any sports game, or attending a concert.

One user of the Digital 5MP Camera said that he was able to use the device properly during sunny days. The clarity was also very good for him. While another Eoncore 2” user praised the product he voiced the opinion that one has to make sure that the camera is capturing what is being through the binoculars because the lenses are different.

The first pair of binoculars with camera we examined is manufactured by Pyrus. It includes that integrated LCD display enabling the viewers to access a variety of different functions and controls so that you can capture high definition video and photos on the fly.

It also features 12 X magnification with a 32 mm aperture binocular system, combining a high quality binocular system with a high-def digital video camera that is a great option for hikers, birdwatchers, hunters, fishermen, private detectives conducting surveillance, or anyone who enjoys the outdoors and wants to capture its magnificence.

The second pair of digital camera binoculars we examined is manufactured by Power Lead- it's marketed towards outdoorsy people, individuals that are on adventure travels, conducting surveillance, concert goers who are high up in stadium seats, and people that enjoy hunting, birdwatching and fishing. This is a Macintosh compatible option because of its 2.0 USB interface.

The third pair of binocular cameras we examined is the eight megapixel Vivitar. It provides 12 x 25 mm magnification with a 4.6 field of view. It doesn't ship with an SD card so you'll have to purchase that on your own- though it does come with a shoulder strap, editing software, and a carrying case. It doesn't record audio- so in that respect is inferior to a traditional video camera.

The fourth pair of digital camera binoculars we examined is the 10 x 25 Pyrus pair. It's marketed as providing 10 X magnification with a 25 mm objective lens diameter, a telescoping focus range of 3 mm to infinity and photo file size resolution of 1280 x 960.

The last pair of digital camera binoculars we examined is the five megapixel 12 x 32 Eoncore.

Buyers were overall moderately satisfied with this option, with one purchaser telling us that he was initially confused because what you were looking through in the binoculars is is not what is in the camera's viewport. The zoom refers to the camera and not the binoculars themselves, so be aware of that prior to purchase.

Below, we've included our old comparison table. Sadly, many of these products are no longer in stock, so we've upgraded the comparison table at the top of the page with in stock items.

If you are interested in purchasing a pair of digital binocular ﻿cameras you might be an adventure traveler or a bird watcher that wants to grab some compelling images of your outdoor exploits.

As we have seen, these are pretty useful and high-quality devices, but you can't expect to be snapping ultra HD quality images or taking groundbreaking video. If your expectations are more moderate than a National Geographic photographers, for instance, you can definitely capture some great video imagery of your trips or outdoor interests.

Inserting a micro-SD card, with the Pyrus digital camera binoculars, for instance- you can take up to 32 GB of imagery and video footage. All of which can be transferred to your computer to a USB.

The anti-shake feature of the digital camera binoculars is a functionality that can help to improve photo and image clarity, with some users opting to use tripods instead to capture better quality imagery.

If you are interested in purchasing a pair of these video-equipped binoculars, check in on the comparison table above. It's also important to read the product pages to get a sense of the specific product specifications.

Shopping around you'll get a sense of what the best options are on the market and what other users are saying about how they have used the use binoculars- you can then figure out if a particular pair of binoculars is likely a quality purchase for you.