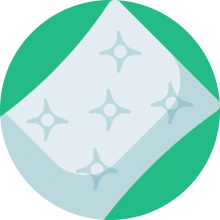 The J, C, U and full-length shapes can help achieve comfortable side resting positions.

There are a variety of sleeping positions both women (and men!) can can try- hugging a long side, lying cradled in its interior, with knees gripping the pillow leg to help relieve painful lower-back pressure (Source).

These 'hug' pillows are a must when pregnant women are trying to avoid sleeping on her back, if they believe it helps enhance blood flow to the womb (Source).

There are some different shape options available- basically they differ by how much of an enclosure is created by the pillow- ranging from totally straight (full-length) to almost completely enclosed (C-shaped and U-shaped).

J-shaped body pillows are curved at only end and are generally considered to be the least supportive option for pregnant women. They provide more space on one side than the C or U-shaped options, but less than the full-length hugger pillow (Source).

C-shaped body pillows​ are commonly the lowest-priced option. These full pillows support head and shoulders the most at the top of its C-shape, with 'long ends' that help support the legs at the bottom of the C and space for the pregnant belly in the opening (Source).

U-shaped body pillows ​provide a cradled nest to rest in, supporting both the back and belly simultaneously. Many believe it's the best option for pregnant women because it offers support to the back and the belly at the same time (Source). It enables women to sleep on either side while her head is supported, which also helps with heart burn.

Full-length body pillows​ provides complete body support from sleeper's toe to the head. You'l find them between five to six feet in length. Most commonly, you'll be able to wrap it around the body for maximum comfort (Source).

This C-shaped contoured maternity pillow features a zippered, removable pillowcase and is designed to help alleviate pain related to sciatic, back pain, heartburn as well as carpal tunnel syndrome.

It is especially ideal for pregnant women who frequently find it difficult to locate a comfortable sleeping position because of its unique shape, it is able to sport the belly and the back simultaneously.

The two contour legs will enable the user to comfortably sleep on either they’re right or left side, with the contours helping to adhere to the natural shape of your body. It can also be inserted between your legs, used to raise the angle of your head, and help to align your hips, which frequently reduces pain people experience in that area. 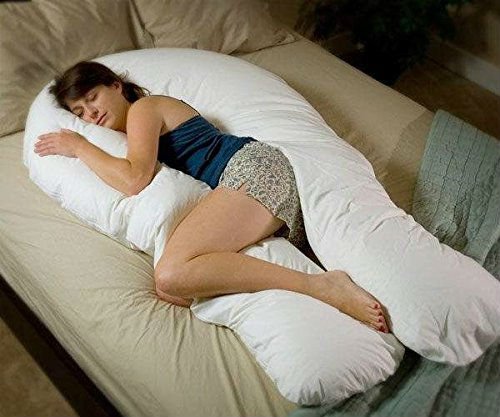 The Moonlight Slumber Total Body Support Pillow is a U-shaped design intended to help you stretch out while simultaneously supporting either side of your body.

It is filled with a proprietary fiber called Fusion Foss that the manufacturers claim enable it to better circulate air and remain permanently soft and fluffy. This is a somewhat more expensive pillow, but many users comment that it helps them, particularly when they were not side sleepers already, to sleep on their side when they are pregnant.

When pregnant women sleep, doctors often advise that they can lie halfway on their back, as long as they have pillows they keep them propped up at an angle.

This particular pillow enables its users to lay on their sides and have the pillow cradle them around the front of their bodies, while also enabling them to lean back into it, maintaining a safe sleeping position. Other people who suffer from chronic pain, comment that the pillow’s ability to support the back and hips help to ease muscle tension related to fibromyalgia. 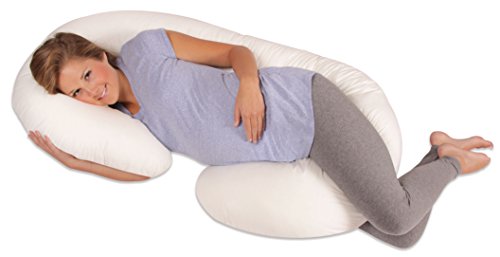 The Leacho Snoogle Body Pillow was designed by a registered nurse and mother.

It is engineered to provide back and stomach support for pregnant women while also helping to relieve chronic pain symptoms from disorders like arthritis, back and neck pain, and fibromyalgia.

Explicitly designed to replace the multiple pillows people use to find a comfortable sleeping position, the body pillow is engineered to adhere to the natural shape and contour of the human body. Some users comment that their pregnant wives can now sleep soundly, contributing greatly to marital harmony.

Husbands describe going to bed with their pregnant wives who only sleep fitfully, constantly waking them up because they can’t find their own comfortable sleeping position. An interesting and underreported benefit of these pillows is that as pregnant women’s bodies change over time, these pillows are capable of adapting to their altering shape.

Some people claim that removing the case of the pillow can be aggravating, but this is really the only significant drawback that we’ve seen with this particular model, as well as the others that we have reviewed above.

What to know before purchasing a body pillow

Before you decide on a particular body pillow, make sure to consider its size, its shape as well as the materials it’s made from. 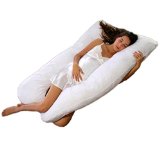 Many body pillows have an oversized ‘U’ shape, but others have a ‘J’ shape that resembles a candy cane that you might place on a Christmas tree, while others have more of a rectangular shape to them.

The first contoured body pregnancy pillow we examined was the J-shaped option by Web Linens-it comes in white ivory burgundy and gray. It's designed to help relieve the carpal tunnel, heartburn, sciatica, nasal congestion, all while supporting the stomach and back.

As well, it's marketed towards expectant mothers- because this J-shaped pillow helps to cushion and support the back, easily tucking between the legs, it can be a comfortable way for pregnant women to sleep while cradling their bellies.

The second oversized down body pillow we examined is also manufactured by Web Linens- it is the oversized maternity pillow. This is not a curved hug pillow- instead, it is fully straight, a really long body pillow.

The third body support pillow we examined is the Moonlight Slumber option- it is a U-shaped pillow, designed for sleepers to comfortably stretch out while supporting both sides of the body.

One of the benefits, the company says, is that it effectively cradles the body during rest, which decreases the incidence of turning and tossing, helping to keep your hips, shoulders, back and neck comfortably aligned for a complete night's rest. In addition, it's filled with what is called a Fusion Fiber- the manufacturers refer to it as a hypoallergenic fluffy and soft polyester polymer that is clump and lump resistant.

Unlike some of the other options we examined, this 10-pound pillow is made in the USA. In terms of washing of the pillow, you should launder it in a front-loading washing machine- and you should also add a tennis ball into it during the dry cycle so that the pillow fluff up.

The fourth option we examined was the C-shaped contoured maternity pillow- it comes in white, ivory, burgundy, chocolate, and gray. It's marketed towards expectant mothers who have a difficult time finding a comfortable resting position- the two contoured legs enable them to sleep on either their sides or their back.

The curved shape helps to relieve the pressure of a pregnant stomach. As well, the manufacturers say that you can tuck the body pillow between your knees, helping it to correctly align your hips and to comfortably elevate your head.

The last full body pillow we examined was manufactured by Leacho. It comes in ivory, sage, gray, brown, khaki and mauve colors. It's marketed towards people that have tons of pillows cluttering their beds and want to consolidate them into one single and dynamic option to support their stomach, neck, back and hips.

As well it's also marketed towards pregnant mothers, providing them the stomach support they need during their pregnancies. Indeed, another market that the Snoogle targets are people suffering from chronic pain disorders that affect the hip, the bad, the neck, as well as those dealing with arthritis and fibromyalgia.

Body pillows are often overlooked as sleeping aids, but they can be truly effective in reducing back pain and you when you to get a full nights rest.

Particularly if you are trying to sleep on your side, a full body pillow can certainly help you to achieve a more comfortable position. Their design is engineered to naturally conform to your body’s size and shape, aligning the spine and promoting the healthiest sleeping posture for you.

Body pillows are renowned for providing complete body support, especially for side sleepers.

They are generally large enough to accommodate the full-length of the human body. Or at least from one's head to one's knees.

They enable you to have a place to rest your legs, arms, and head comfortably.They do come in a variety of different sizes, so you will definitely have plenty of selection to match how you like to sleep.

These body pillows are particularly popular with pregnant women who find them especially accommodating.