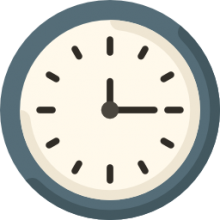 In this post, we examined 5 of the best-selling Zenith watches according to some popular e-commerce sites.

Zenith is a Swiss company that manufactures luxury watches. What sets this company apart is they’re one of the few remaining watchmakers who make their own movements in house (Source).

Luxury watches are generally analog, meaning they operate with gears and springs. Older watches required winding to keep them running but today’s watches either operate with quartz movement, where a quartz vibrates from energy provided by a battery (Source).

Today’s smart watches can do so much more than tell time, but there’s nothing like a classic analog watch. When purchasing a luxury watch, experts say to buy one that would go with both a suit and your weekend attire. By avoiding the ‘trends’ you’ll have a watch you can wear for years to come (Source).

We looked at 5 Zenith men’s watches and talk about the features each has. 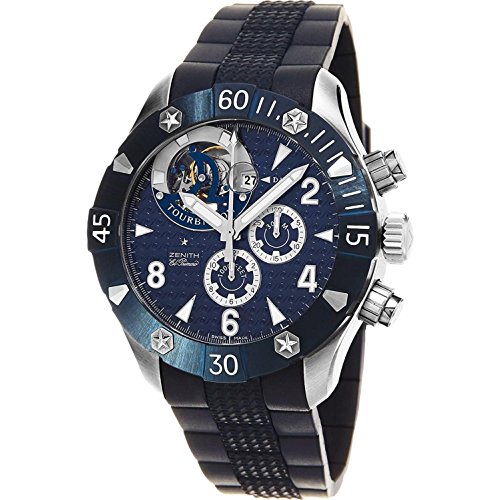 This sea tourbillion automatic watch offered by Zenith is a limited edition timepiece with a unique design and a top-notched craftsmanship. Users love the design of the watch and its many features, but most do note that it’s quite expensive.

The Zenith tourbillion automatic watch features a 46.5mm brushed stainless steel case, a unidirectional rotating bezel, a blue dial, silver-tone luminescent hands, and luminous indices. Another fantastic thing about this tourbillion men’s watch is that it has Arabic numerals, a magnified date window, a tourbillion carriage displayed at 11 o’clock, and a scratch-resistant sapphire crystal.

In addition to this, for optimum accuracy, the watch has Swiss automatic tourbillion movement and chronograph functions such as a sweep seconds hand, a 30 minute counter, and a 12 hour counter.

And that’s not all. Zenith men automatic watch also offers you screw-down crown, push buttons, and 55-hour power reserve. This unique sea tourbillion automatic watch is also water-resistant up to 300 meters, and it has a blue silicone band with pin buckle.

As most reviewers note, this Zenith watch for sale is unique and magnificent, and it comes with free shipping. However, they also indicate that the price is too high for the average Joe. 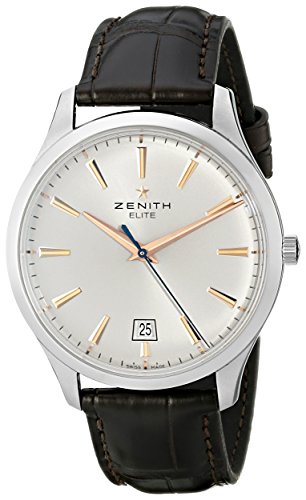 If you need a high-quality watch to surprise a loved one, this elite silver dial watch offered by Zenith is worth considering. Users love the elegant look, but some do note that they had issues setting the watch. The Zenith Elite silver watch features a white dial, a date window, a blue seconds hand, and rose gold-note hands and indices. Another fantastic thing about this watch is the Swiss automatic movement for optimum accuracy and the analog display.

In addition to this, this Zenith watch model has a 40mm stainless steel case and a sapphire dial window with anti-reflexive properties. The crocodile leather band with buckle closure completes the picture. You should also know that the watch is suitable for recreational swimming, but not diving.

A reviewer shares that he had issues with the Zenith silver sunray watch at the beginning because it was gaining 10 minutes an hour. However, he discovered that you have to wear the watch for 12 hours at least for several days to ensure that the automatic winding movement is functioning correctly. He advises that you read the instruction manual carefully. The buyer also notes that Zenith watches reputation is well-earned and that he is delighted with his purchase. 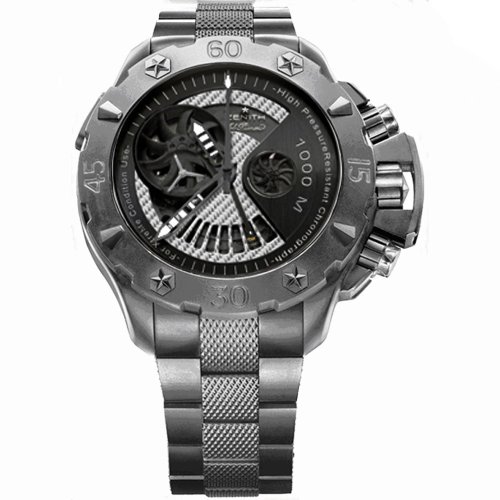 This Xtreme men’s watch offered by Zenith will be the crown jewel of any collection with its elegant design and unique features. Users love the 46.5mm titanium case, but some do note that the watch is too expensive.

The Zenith Defy Xtreme watch is a limited edition, and it has a quality automatic movement powered by the movement of your arm so you shouldn’t worry that the battery will run out. Moreover, it features a scratch-resistant sapphire crystal, a black dial, a unidirectional bezel, a titanium band with a deployment clasp, and a 2-year warranty. But one of the most extraordinary qualities of this watch is that it’s water-resistant up to 1000 m so that you can go diving or swimming with it.

As most users remark, the Zenith titanium watch is a remarkable timepiece which will be an excellent addition to any dedicated watch collection. However, they also note that it’s very expensive and not many people could afford it. 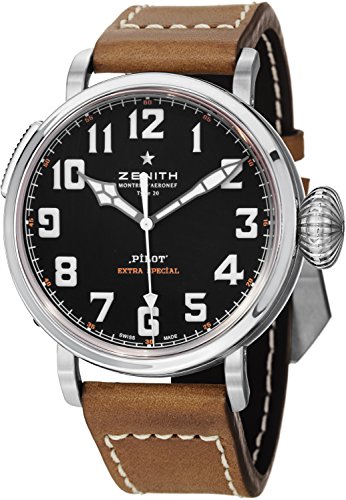 If you need a watch to tell the time and you won’t want something cheap and simple, you might take a look at this extra special men watch offered by Zenith. Users love the minute markers around the outer rim, but some do note that the watch is quite expensive. The Zenith pilot watch features a stainless steel case, a fixed stainless steel bezel, a black dial, luminous silver-tone hands, and Arabic numeral hour markers.

Another great thing about this watch is that it has automatic movement with a 42-hour power reserve, and you don’t need batteries. Moreover, this extra special pilot watch has a scratch-resistant sapphire crystal so that you don’t have to worry about accidental damage, and the brown band is made out of calfskin. The watch is also water-resistant up to 100 meters.

In general, users are satisfied with the performance and accuracy of the Zenith pilot men watch, and they don’t have any significant complaints regarding its quality or functions. A reviewer shares that the picture doesn’t do justice to the beauty of the watch and that it fits his wrist very well. He also states that Zenith watches would never disappoint you and that you can always count on an exceptional product. The buyer warns that you might have to pay more taxes if you ship the watch overseas.

This automatic self-wind watch offered by Zenith is well-made, accurate and impressive. Users love the rose-gold bezel, but some do note that the watch is pre-owned. The Zenith El Primero features a self-winding movement, a 42 mm case, a black analog dial, and a brown alligator leather band with an 18k rose-gold buckle.

Another great thing about this watch is the chronograph and tachymeter functions in addition to the date window, the hours, minutes and small-seconds hands. WatchFacts certifies the El Primero watch and rates it as in mint condition.

Moreover, it comes with an original box and manufacturer’s papers. The Zenith El Primero is also water resistant up to 100 meters, and it has 1-year warranty backed up by WatchFacts.

Zenith SA started as a Swiss watchmaker company in 1865 in Le Locle. The founder of the company is Georges Favre-Jacot, who was then 22 years old.

In 1999 the company was purchased by LVMH. Soon after this it became one of very few brands in the production of watches and jewelry. In 2017 Jean-Claude Biver became CEO of the company, thus replacing Aldo Magada (CEO since 2014). Up to today Zenith still produces its own movements in-house.

One of the first chronographs that were automatic was the El Primero caliber. It was released in 1969 first and is still manufactured today. This movement has a frequency of 36 thousand alternations per hour. Thanks to this high rate the watch has 1⁄10 of a second resolution, as well as a potential for even greater positional correctness over standard 28,800 frequency alternations per hour.

In 2012 the El Primero Stratos Flyback Striking 10th was released. The production was limited to 1,969 pieces only and was done in honor of 1969, the original release date.

The founder of the company, Favre-Jacot (1843 – 1917), was interested in the industry of watchmaking from a very young age. In Le Locle, he ordered architects Le Corbusier and Alphonse Laverrière to build a house for him. This latter architect has had a huge influence on Favre-Jacot upon the design and production of some of the watches.

Soon after Zenith had already become a part of LVMH, the brand started to be considered a top class luxury watch brand. From the year of 2002, Thierry Nataf, the art director who was also the designer of new models, was Swiss watch manufacturer’s president.

Under the new leadership the quality of the products experiences positive changes. The watches started to appear much stronger and more spectacular. This is most obvious, for example, in the case of Chronomaster’s successor models, the so-called “Open” series. These new watches had a new dial design thanks to which one can get a better direct front view, and the watch’s mechanical finesse can be easier noticed. Another feature common to this series is that has quite unusually arranged display, due to which the watch seems to be smiling.