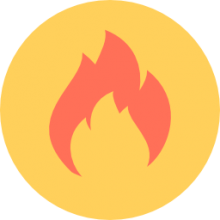 When you pass the torch over a weed, the heat boils and bursts water-based plant cells.

If you're a gardener, all you have to do is walk slowly (1 to 2 miles an hour) along your garden plots with your burner- weeds die when exposed to the heat for only 1/10 of a second (Source).

Our top pick is the Red Dragon (VT 2-23 C) Weed Dragon. Buyers say that this is an ultra-powerful burner- but does require strategic use.

For young weeds, the burner will kill them down to the root. For older, more developed weeds, you'll have to circle by in a couple days and hit it again. That's not the burner's fault- it's just how weeds work. These are definitely a more aggressive method of dealing with leaves than our more traditional leaf mulch shredder. 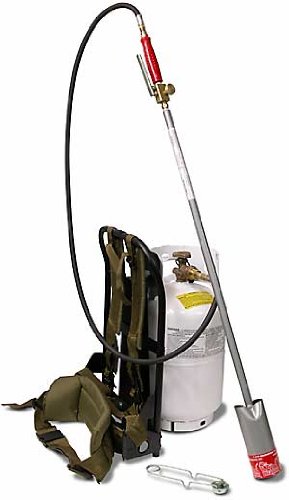 What are weed torches?

Weed torches are devices used to kill weeds using fire. They’re often preferred around gardens when people don’t want to use harmful pesticides or chemicals that can affect edibles or get into the groundwater (Source).

These garden torches are essentially metal tubes that connect to small propane tanks. This makes them very portable and easy to carry. To be effective, the user would walk slowly and apply enough heat so the plant changes from shiny to dull. Some people also use weed torches for melting ice.

Buyers say that while these systems are effective, weeding can take a long time if you have a large area to cover. They also recommend checking to be sure they’re legal in your area, and lastly, be careful when using in hot, dry conditions due to it being a fire hazard (Source).

The Bernzomatic self-igniting outdoor torch could be a solid option for burning off weeds and leaves. Users love the functionality of this tool, but some do complain about the lack of power.

This product is an outdoor torch, specifically designed to produce a high-output flame for a wide variety of outdoor uses.It features an integrated trigger-start mechanism for quick flaming and an adjustable flame control. The torch works on propane or MAPP gas. This item might be a solid choice if you want a propane torch for controlling weed.

In general, buyers have a very favorable opinion of the Bernzomatic weed torch. They agree that it is easy to use and lightweight, which is great because you can carry it for long periods without fatigue. Users conclude that it’s a handy tool to have in the yard.

However, some purchasers do complain that the torch needs more power. As they share, this item is great for emerging seedlings, but not so powerful for established weeds.

If you are looking for a weed torch, you might want to consider the Greenwood propane torch with turbo blast trigger. Users like the performance of this tool, but there are complaints regarding the length of the wand.

This torch features a turbo blast trigger for a burst of extra heat. According to the manufacturer, it generates temperature over 3000 F with ease when connected to any standard 20 lb. propane tank. This item could be a solid choice if you need a powerful flame for handling small jobs around the home, such as burning weeds, melting snow or removing paint from non-flammable surfaces.

In general, users state that the Greenwood weed torch meets their expectations. They agree that it is well-built and easy to use. Users appreciate that it has a good flow control and that it overall works great.

However, some buyers wish the wand was longer so you wouldn’t have to bend over to use the torch. One online reviewer complains that you can’t control temperature by squeezing the handle, but by turning the knob on the side. 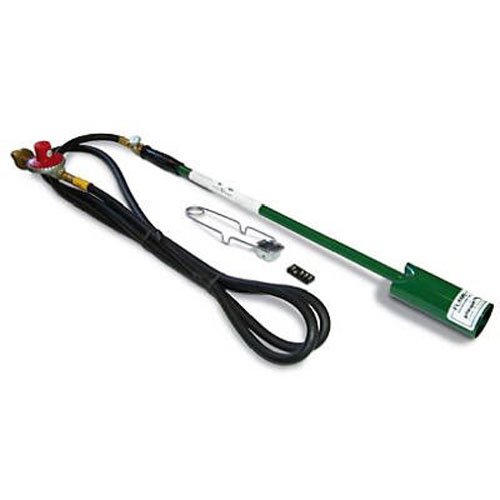 If you’re looking for a top-rated weed torch, you might want to consider the Red Dragon propane vapor torch kit. Users love the handiness of this yard tool, but some complain about the size of the wand.

This product is a propane torch kit that can, it is said, quickly hook up to any refillable propane tank. As the manufacturer boasts, this torch kit has plenty of power and generates heat up to 2000 F. This item might be a good choice for homeowners or landscapers who want to kill weeds safely and naturally without herbicides.

The general user consensus concerning the Red Dragon propane weed torch is that it is a great garden tool. Purchasers appreciate its good quality, as well as that it is well-made, safe to operate and easy to use.

However, some buyers complain that the wand is a bit too short. Another complaint regards the adjustment valve which purchasers wish was relocated since it is in an awkward location right at the top of the foam handle.

Complaint – too short wand/Complaint – adjustment valve should be relocated 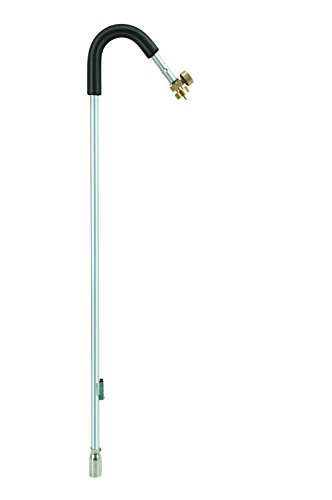 The Mag-Torch garden torch is a solid option for home owners who are looking for a non-chemical way to get rid of weed. Users like the effectiveness of this garden tool, but some complain about the malfunctioning igniter.

This product is a self-lighting outdoor propane outdoor torch. It is said to produce soft lapping 3-inch flame in diameter. It features a padded handle and 36’’ reach. This product might be a solid option if you are looking for a weed torch that works with standard NRT propane cylinder.

The general user consensus concerning the Mag-Torch weed torch is that it is effective for weeds and that it works well. They appreciate that it is easy to use.

However, some buyers complain about the igniter which gave out after a couple of uses.

The Hot Max weed torch is a solid option for someone who wants to burnweeds with clean and efficient LP gas. Users like the usefulness of this device, but some do complain of excessive propane consumption.

This product is a 500,000 BTU propane torch with a trademarked molded handle for more comfort and better control. It features a long handle which keeps you from bending over. The Big Max comes with a solid brass adjusting valve to control the flame, a POL safety valve, and a single flint striker for lighting the torch. This item seems like a solid choice if you want a weed torch that uses standard liquid propane tanks.

The general user consensus concerning the Hot Max propane torch is that it is well-made and heavy duty. They agree that it has a very strong flame and a great flame control.

However, some buyers complain that this garden tool consumes too much propane. Another complaint regards the fact that the item is not self-lighting.

Countless generations ago, our ancient ancestors gradually began to use their mental capacity for reason and logic to make world-changing discoveries, such as the discovery of fire, the wheel, and later on, crop farming and gardening. Ever since then, we stopped being hunter-gatherers and began to settle down on one piece of land and using that land to grow various crops to feed people in the community.

For many centuries now, farmers have been using the technique of controlled fire burning to improve the state of their crops. Previously, farmers had to use primitive, time-consuming and careful methods of producing controlled burning. However, in recent times, with the tremendous advances in science and technology, farmers are now able to use flamers or flame torchers in their gardens and fields.

Obviously, it is always a good idea to have a useful tool such as a flame torch that can help you get rid of unwanted weeds without having to manually bend down and pluck each individual weed while disturbing the soil around it and accidentally spraying herbicides onto your crops.

Although the technology for producing controlled burning has been around since the 1940s, farmers have been vocal about needing a more advanced and modern method of creating controlled flames in order to burn up unwanted vines more effectively and quickly. Tools that produce flames, aka flamers, don't need any special chemicals and thus, don't have the negative side effect of contaminating the groundwater with chemical residues that can damage your crops.

Apart from damaging crops, you also need to be careful about the safety aspect of flamers. If you use a flamer near any brown, dry or some other kind of flammable material, you could end up causing a huge fire. So never use a flamer near any flammable material. This is the reason why using flamers in arid or forested areas is forbidden by law in many places, as they can cause huge wildfires. So before you spend any money on getting a flamer, ask around and find out for sure about what the laws are regarding flamers in your district.

While using a flamer, your own safety is an essential issue that you need to address before attempting to create any controlled fire. Typical flame machines are basically portable gas igniters that cause a flame that has a temperature of around 2000 degrees Fahrenheit.

When you use a flamer to get rid of bushes, you carefully pass the flame caused by the flamer over the creepers, which rapidly boils all the water in the cells of the unwanted plants and weeds, which leads to them exploding outwards. This huge amount of heat causes all nutrients and water to stop getting to the section of the stems of the weeds, and thus, all portions of the plant die.

If you are not a farmer and instead simply have your own garden at home, getting rid of unwanted vines is simple and easy. All you have to do is turn on the flame on your flame machine and slowly walk past the creepers, burning them all up as you pass by them. Bear in mind that you just need to keep the flame on the weed or plant for 1/10th of a second for it to die out completely.