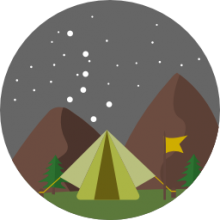 Truck bed tents provide a shelter for you and one other adult to sleep when out camping in your pickup (Source).

The primary advantage compared to traditional camping is that truck canopy camping gets you off the ground and they can be easier to erect when the camping ground is difficult to insert stakes into (Source).

Buyers advise that you practice assembling these tents a couple times before taking them into the wild- they can be a little tricky, especially if you don't have an extra set of hands (Source).

Since they strap down to truck beds, there is some adjustability regarding fit- so even if the tent you select isn't perfect sized, you can modify it a bit.

You'll also want to purchase some cushioning- we recently examined some truck bed inflatable air mattresses, though some buyers just slide a futon in.

The Kodiak truck bed tent is made out of canvas- some buyers prefer the ruggedness and structural durability of canvas as opposed to lighter fabric materials (Source).

The Rightline Gear tent has the most sizing options- you can check out their sizing guide to ensure you purchase the appropriate configuration for your vehicle.

Some extra amenities buyers liked- the Kodiak has a lamp hook on its interior, while the Napier has some netting at the top that campers used to place iPads for movie screening.

The Rightline and the Kodiak are both floorless designs- the other tents have sewn-in floors. A floorless tent means you won't have to remove all the truck bed clutter before bedding down. 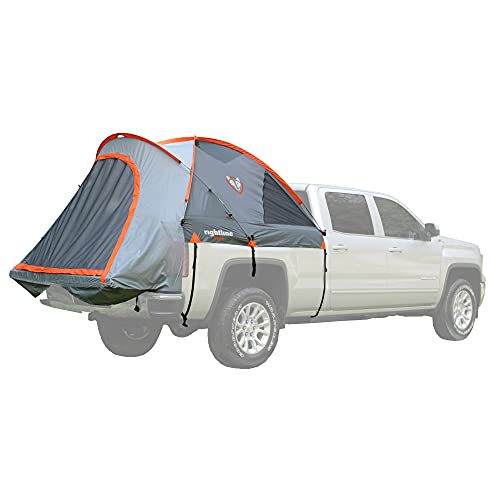 This truck bed tent has a floorless design, includes rugged straps and nylon buckles designed to protect your vehicle's finish.

The poles and pole pockets are color coded for simplified assembly. It's made from a water-resistant fabric to protect against leaks- and can sleep 2 adults.

One Ford Supercrew owner told us that it was easy to assemble, looks attractive, and provides unexpected interior spaciousness. Interior pockets were a plus.

He did tell us that it's easier to erect with an extra set of hands, but manageable on your own, once you get the hang of it.

A solid buy- enabling you to camp wherever you've driven your truck. 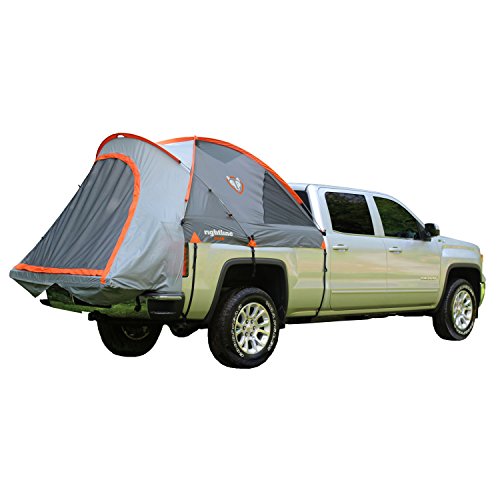 This truck bed tent offered by Right line Gear is a solid option if you are looking for a full-size standard truck bed.Users like the practicality of this truck tent, but some do complain about not the greatest quality.

This product’s floor less design allows for a set-up without removing gear from the bed. It features protective heavy-duty straps and nylon buckles. The tent is made of water-resistant fabric with tape sealed seams. It has color coded poles and pole pockets for quick and easy set-up. This item seems like a solid choice if you want to camp in a dry truck bed, up off the ground.

The general user consensus concerning the Right line Gear full-size truck tent is that it is well designed and easy to set up. They state that there is plenty of room for two adults to sleep in, as well as that the shelter absolutely keeps the rain out.

However, some buyers complain about the quality of the materials. They complain mostly about the stitching, seams and zippers. One dissatisfied buyer says that the tent doesn’t do well in the heavy wind. 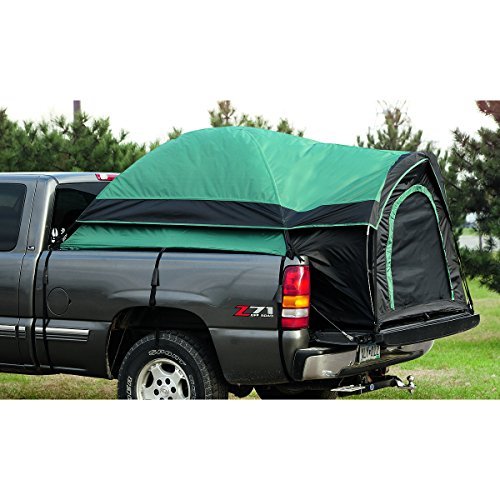 This 6-by-6-foot truck bed offered by Guide Gear is a good option if you are looking for a compact truck tent. Users love the functionality of this product, but many do complain about vague instructions.

This product features a top-notch construction, mesh windows for excellent ventilation, sewn-in polyethylene flooring, water-resistant coating and large interior area with 4.75′ of headroom. It is lightweight and easy to set up with 4 total poles. The item comes with full rain fly to keep you totally dry. This compact truck bed might be a good choice for those who want a comfortable shelter that gets them up off the ground in minutes.

In general, users have a favorable opinion of the Guide Gear compact truck bed.What they praise is that it fits various trucks very well, has plenty of room and that it is good for rainy and windy weather.

However, many buyers complain about the confusing set-up instructions (or in some cases the lack of it). Several dissatisfied users share that the tent poles broke after only a few times of use. 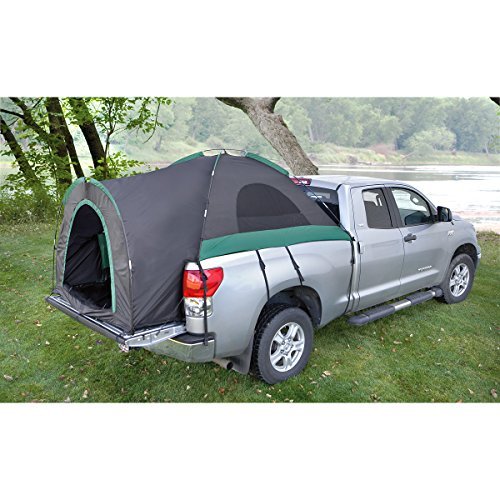 This truck bed offered by Guide Gear is a good option for those who need a full-size truck tent.Users love the functionality of this truck bed, but some do complain about the instructions.

This product deploys in minutes in pickup beds, providing a fast and comfortable shelter. It features a large interior area with 5.25′ of headroom, water-resistant coating, sewn-in polyethylene flooring, large D-shaped door, mesh windows for ventilation and 2 storage pockets. If you want to experience camping off the ground in a fully enclosed tent that will keep you totally dry,this truck bed might be a good option.

In general, users have a positive opinion of the Guide Gear full-size truck tent and they agree that it fits well and is easy to set it up and take it down. As they say, it holds up well in the rain.

However,some purchasers complain about the vague instructions. Others have complaints regarding the poor ventilation.

Setting Up The Guide Gear 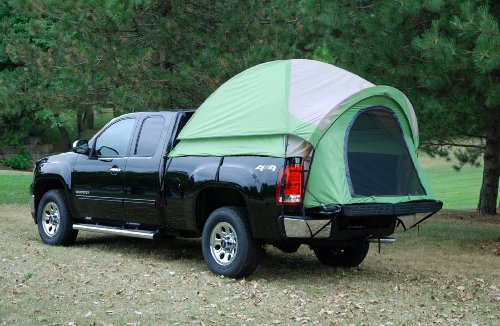 If you are looking for a top-rated truck tent, you might want to consider this one offered by Napier Enterprises. Users love being off the ground by using this tent, but some complain about the quality.

This product features a roomy 5’5″ interior, sewn-in floor, 4 large windows and full rainfly. Its portable design assembles easily. This truck bed could be a good choice if you’re looking to use your vehicle’s cargo area for sleeping comfortably off the ground.

In general, buyers have a very positive opinion of the Napier Enterprises Backroadz Truck Tent. They state that it is easy to set up and fits the truck great. Most of them agree that it is great for rainy weather.

Setting Up The Napier

If you are looking for a good-quality truck bed, you might want to consider this product offered by Kodiak Canvas. Users love its quality and functionality, but some do complain about vague instructions.

This product is made with hydra-shield, 100% cotton duck canvas that is durable, watertight and breathable. Its five windows provide excellent ventilation and openness. If you are looking for a sturdy, steel tube framed truck tent, this might be a good option.

In general, users are happy with the Kodiak Canvas truck bed tent. What they like in particular is that it is well-constructed, well-made and very spacious. All in all, they agree that it is an excellent tent regarding the strength and durability.As they say, the good quality, great fit and waterproof features make it a great buy.

However, some purchasers have complaints regarding the vague instructions. Plus, some share that it takes a little practice to set it up solo.

Setting Up The Kodiak

If you are interested in truck camping, you will likely want to invest in a truck bed mattress as well as a truck bed tent to make the experience as comfortable as possible.

The first truck bed tent we examined is provided by Rightline Gear- it comes in a variety of sizes for trucks with a 6-foot bed, an 8-foot bed, a 5-foot tall bed, and sizes for full-size trucks, as well. This is a floorless design, which means that you won't have to remove a ton of camping accessories from the back of your pickup truck before bedding down for the night. All of these tents are designed to accommodate two adults.

As opposed to setting up a traditional campsite, Rightline Gear says that this style of the truck bed camping keeps you off of the ground, plus it's a lot simpler to set up without having to use stakes and tarps. You'll want to consult with the truck sizing guide located on the product page to ensure you purchase the correct model tent for the year, model and make of your vehicle.

The second truck bed tent we examined it is provided by Guide Gear- they say that it fits truck beds 72 inches to 74 inches that are 63" x 74".

The third truck tent we examined was another Guide Gear- it's marketed as a convenient camping and sheltering option for on the go drivers and campers.

The fourth truck bed tent we examined his manufactured by Napier- it comes in different sizes including 5 foot, 6 foot, 8 foot, and more. It features 4 windows, a rain fly, strong ventilation and a storm flap.

The last option we examined was the Kodiak canvas truck bed tent- it comes in different sizes.