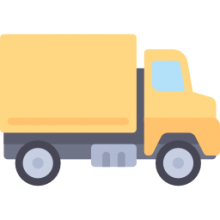 They come with either integrated or external air pumps that plug into your vehicle's charging port (Source).

And they pair with truck bed tents to provide a sheltered sleeping experience, whether you're tailgating or camping (Source).

They come in a range of sizes to accommodate both mid and full-size trucks (Source). Many of these inflatable mattresses, however, are prone to frustrating deflation issues.

The best option we've seen is manufactured by AirBedz. Our favorite is the AirBedz Pro 3. You can check out this infographic to see if it will fit your truck. It comes in 3 different sizes:

You can actually purchase wheel-well inserts to convert it to a traditional air mattress for home use.

Our Top Pick: The AirBedz Pro3

He says it's an ideal sleeping solution for camping: 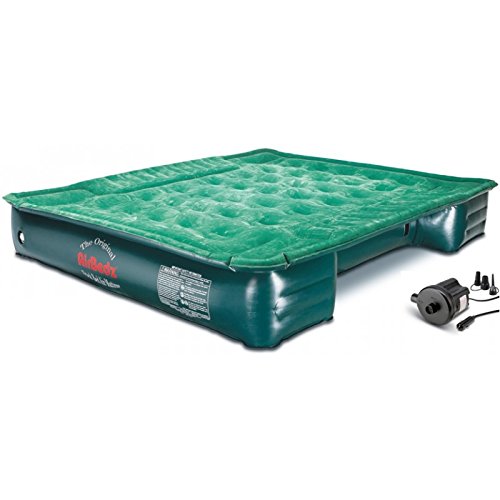 This truck air mattress offered by AirBedz Lite is comfortable, well-made and an excellent choice for anyone who travels a lot. Users love the portable DC air pump with a 16’ cord, but some do note that the mattress is made in China.

The AirBedz Lite 6’-8’ truck bed mattress measures 76” x 63” x 12” when inflated, and it features a high-grade PVC material. Another great thing about this truck air mattress is the integrated coil system distributes the weight evenly for a good night’s sleep. Moreover, the mattress has cutouts on each side to fit the wheel wells and to accommodate the whole truck bed.

In general, users have a high opinion of the AirBedz truck bed mattress, and they praise its durability and the comfortable design. A buyer comments that the truck air bed doesn’t take much space when it’s packed and that the material is top-notched. He adds that the bed inflates very quickly and that the air pump has a deflate assist option.

Another user observes that the AirBedz mattress fits his 2000 Chevy F150 perfectly and that he doesn’t have any issues with leaking. A reviewer adds that the truck bed is almost as comfortable as his own bed, and he highly recommends it.

However, some customers have said that the inflatable mattress deflates overnight and that it leaks. Some also state that the bed arrived damaged. 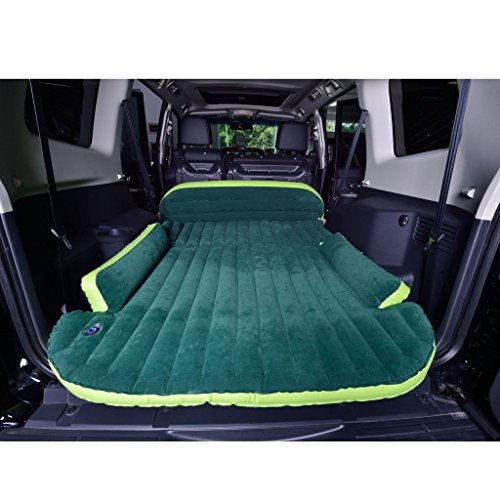 This extended travel mattress for trucks offered by Wolfwill is well-designed, easy to carry and convenient for long camping trips. Users love that the air mattress deflates and inflates for two minutes, but some do note that the air pump cord is short.

The Wolfwill SUV air mattress measures 11” x 9.4” x 6” when folded and 71-59” x 51 – 46.5” x 2-4.7” when unfolded, and it’s made of breathable, eco-friendly, non-toxic PVC material. Another great thing about this car cushion bed is that it consists of three parts which you can inflate separately, and you can also adjust the inflation volume.

The package includes a 12V car electric air pump and a maintenance package with two patches.

A reviewer mentions that he slept more comfortably than he expected and that the Wolfwill SUV inflatable bed fits his Subaru Forrester with no issues. He adds that the pump could be better designed.

Another user states that he highly recommends the Wolfwill air mattress for SUV as one of the best travel inflatable beds and that it’s perfect for a 2012 Jeep Unlimited 4dr. A buyer also observes that the bed inflates very quickly and that it’s one of the softest mattresses that he has ever encounter.

However, one customer has said that the inflatable car bed didn’t fit his Expedition well and that there were 9 inches to spare on the sides. 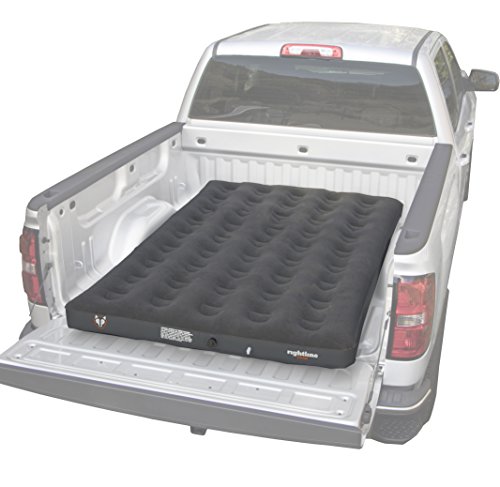 If you are looking for an affordable inflatable truck bed, you might take a look at this 5’- 6’ air mattress. Users love the side storage design which allows them to keep their personal stuff close, but some do note that it’s made in China.

The Rightline mid-size truck air mattress measures 76” x 44” x 7” when inflated, and it features heavy-duty PVC construction, a comfortable flocked top surface, and an O-beam support for extra comfort. Another great thing about this truck bed air mattress is that you can fold it up into a stuff sack, and it comes with a 12V air pump for quick inflation.

The package also contains a patch kit, a stuff sack, and a setup guide. The mattress is also offered in a full-size truck model. 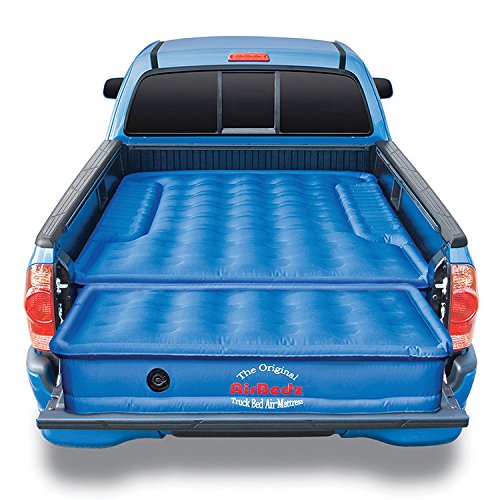 This AirBedz blue truck air mattress offered by Pittman Outdoors is easy to inflate, sturdy, and multi-functional. Users love the built-in rechargeable pump for quick inflation and deflation, but some do note that they had issues with the battery.

Another great thing about this mattress is that you can inflate or deflate it by flipping a switch, and it fits around and over the wheels wells to create a comfortable sleeping space. The package also includes an A/C home charger.

A customer shares that he has been using the Pittman AirBedz truck bed for several months and that he has encountered no leaks. He adds that the pump’s battery last for one inflation and one deflation, but he still recommends the Pittman inflatable car bed as one of the best camping air mattresses.

Another reviewer observes that the 5.5’ truck air bed exceeded his expectation in terms of durability and that it fits his F-150 Supercrew Cab perfectly. A buyer also states that the bed inflates for seconds and that it’s very comfortable and soft. However, some customers have said that it leaks and that it doesn’t stay inflated for long.

The Airbedz On Shark Tank

If you want to have a comfortable sleeping surface at your disposal when you’re on a long camping trip, you might take a look at this truck air mattress offered by AirBedz.

Users love the soft fabric top that keeps linens from sliding, but some do note that the wheel well inserts are not included in the package. The AirBedz Pro3 air mattress measures 12” x 76” x 63.5”, and it features an integrated coil system for extra comfort and a built-in pump that you can connect to your 12 V cigarette lighter.

Another great thing about this truck mattress is that you can pair it with inflatable wheel well inserts and use it as a regular air bed.

An online reviewer observes that the AirBedz truck bed mattress is very comfortable and that it stays inflated without leaking.

He shares that he has been using it for several months with no issues. Another buyer comments that the quality of the mattress is supreme and that the pump’s cord is long and reaches his dashboard.

He highly recommends this as the best truck bed air mattress. A user also states that the mattress fits his truck perfect and that it takes seconds to set it up.

It molds over wheel wells, features a proprietary coil system so that body weight is evenly distributed, and ships with a portable air pump. It's marketed as an air mattress for full-size, midsize and compact trucks that have both short and long layouts.

It creates a comfortable sleeping area within the truck bed- this is great if you enjoy camping, off roading, fishing, hunting or riding your motocross bike.

The second blow up mattress for trucks we examined is provided by Wolfwill. This one is a little bit different- it's made for sports utility vehicles. Because the mattress has three different parts that inflate individually, meaning that you can adjust each section independently.

It's built from and ecologically friendly material, they say, a PVC material that is marketed as non-toxic without an odor. In terms of ongoing maintenance, you don't want it to be stored in the especially cold or hot areas and you should avoid smoking while on it or exposing it to sharp objects.

As well, they say that the cushion inflates and lasts about 10 hours before it needs to be reinflated. The air pump plugs into your car charger.

The third truck bed air mattress we examined is manufactured by Rightline Gear- it's marketed towards mid-sized and full-size trucks. It has a two adult capacity and is engineered to fit in between your vehicle's wheel wells with a little bit extra space for side storage of camping gear, travel accessories etc. It ships with a 12 V air pump that they say will help you to inflate or deflate the mattress in a matter of seconds.

The fourth truck bed blow up air mattress we examined is provided by Pittman Outdoors. It comes in a variety of sizes designed to accommodate both mid-size and full-size truck beds, fitting over wheel wells to create a comfortable sleeping area that fills out to the entire space of your vehicle's bed.

It features an integrated pump that enables it to inflate and deflate with a switch flip. This rechargeable pump is powered by a charger that can be powered while on the road from your vehicles car charging port.

The last truck bed air mattress we examined was another AirBedz option. It comes in three different sizes to accommodate midsize in full-size trucks- engineered to mold over wheel wells and produce a comfortable sleeping space for outdoor adventurers.

This option has received primarily positive feedback- buyers say that it has not experienced the deflation issues that plagues many of the other options on the market. In addition, reviewers appreciate that the power cord is extra long, able to reach all the way from the dashboard to the tailgate.