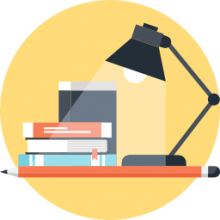 In this post, we examined 5 of the best-selling contact-sensitive lamps.

These touch-sensitive electric lamps are activated by a person’s touch as opposed to activating a switch or button. Most are either nightstand desk lamps.

Most of today’s touch lamps work on what’s called capacitance. This means the lamp holds a certain amount of electrons, and when you touch the lamp, you add electrons thus activating the switch (Source).

A touch-sensitive lamp holds several advantages over traditional lamps that require a button press or a switch flip.

The main advantage is the switching mechanism won’t gunk up and fail over time. When purchasing a new bedside or table lamp, measure the surface on which they’ll sit in case you want enough room to put down a book or glass (Source).

We look at five touch-sensitive lamps and note their strengths and differences. 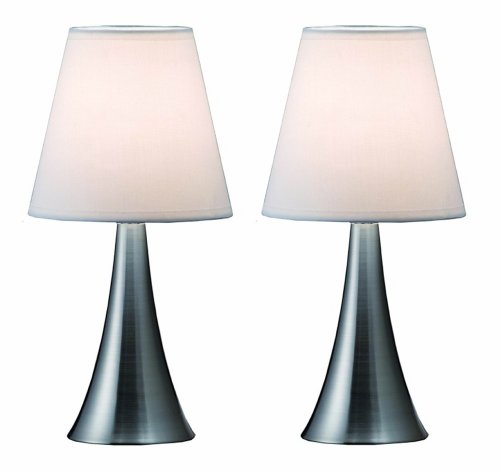 These touch table lamps offered by Simple Designs are elegant, small, and available in five contemporary colors. Users love the price, but some do note that the lamps are smaller than they expected. The Simple Designs mini touch lamps measure 11.5” in height, and they feature touch control with four settings – low, medium, high, and off.

Another great thing about these lamps is that they come with fabric shades, which make them perfect for decorating your bedroom or living room. The packet includes two lamps, which uses A15 medium base bulbs, not included.

As a whole, buyers have a mixed opinion regarding these touch-sensitive table lamps.

A happy user mentions that the lamps produce more light than she initially expected and that she hasn’t had any issues with them. The reviewer adds that the lamps go with any furniture and that they don’t take space at all. Another satisfied purchaser observes that the mini table lamps are the right size for bedside tables and that she highly recommends it.

On the other hand, a customer warns that the lamps pose a fire hazard because they are light and easy to bump on the ground. He says that the bulbs touch the shades and might burn through them. Another reviewer also states that the touch control is not working and that the lamps stop working very quickly.

If you want to add style and elegance to your bedroom, living room, or hall, you can try these touch sensor lamps offered by Aukey. Users love the design, but some do note that the touch control is unresponsive at times.

The Aukey contact sensor table light measures 8.38” in height, and it features a 360° touch control base with three brightness levels – soft, moderate, and bright. What’s more, the light has a colorful display with an auto-cycle so that you can choose between several colors or pause on your favorite one. In addition to this, the base is touch table light comes with 45-day money back guarantee and a 24-month warranty card.

In general, users have a favorable opinion of the Aukey light, and they are pleased with its functionality and usefulness. A user comments that the size of the light matches the provided description and that it emits a bright glow. She adds that it’s easy to figure out how the light works and that she highly recommends as one of the best contact options on the market.

Another purchaser observes that the glow is perfect for a bedroom and that the color options are bright and relaxing.

A buyer also mentions that she liked the lamp so much that she bought three and that she didn’t have any issues with them.

However, some customers have noted that the lamp is not really off unless you unplugged it and that the touch base is not sensitive and often malfunctions. Some also warn that once the bulb blows off, you can’t change it.

This touch sensor table lamp is stylish, handy, affordable, and an excellent choice for a bedroom or a living room. Users love the soft, relaxing light, but some do note that it’s too small for their liking. The Unifun touch sensor desk lamp measures 3.5” x 3.5” x 4.7”, and it features four adjustable light levels – dim, low, middle, and high in addition to 360° light panel.

Another great thing about this lamp is that you can choose between auto-cycle color combinations or fixed colors to match your mood. The touch control lamp comes with 30-day money back guarantee, 12-month warranty, and a micro USB charge cable for the battery.

A reviewer comments that this is the best touch control table lamp she has ever owned and that it lightens up her bedroom adequately. She adds that the lamp is easy to control and that the colors are beautiful. Another purchaser mentions that you have to charge the lamp before you use it and that even a child could turn it on and off.

A reviewer also states that the touch control is very useful and that it emits strong, bright light on the high setting. She shares that the table touch light lasts a while before you have to charge it again.

However, some customers have noted that the lamp stopped working without a month and that they were disappointed by its quality. 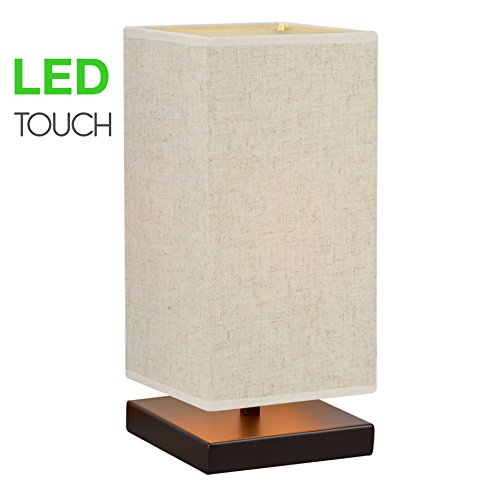 This bedside touch control light offered by Revel is eco-friendly, energy efficient, and an excellent addition to any room in your house. Users love the size and the light, but some do note that it turns on/off on its own.

The Revel touch sensor table lamp measures 12.5″ x 5.5″ x 5.5″, and it features an oil rubbed bronze base, a rectangular honey beige shade, and a weight of 2.5 pounds. Another great thing about this lamp is that the packet includes one 4W LED bulb. What’s more, you can use LED, CFL or traditional 60W incandescent bulbs.

A reviewer shares that the Revel touch control lamp emits soft, relaxing light and that it’s easy to assemble and use. She adds that the lamp is well-made and you just have to tap the base to turn it on or off.

Another user observes that the touch sensor table lamp arrived well-packed and fully functional and that the shade is a nice touch. She highly recommends it as the best touch table lamp for bedrooms. A buyer also comments that the sensor works with no issues and that the lamp is well-constructed and durable. He adds that you can use 75W bulbs with no problems.

However, some customers have noted that the table touch lamp is not as durable as they expected and that it stopped working in a few months. 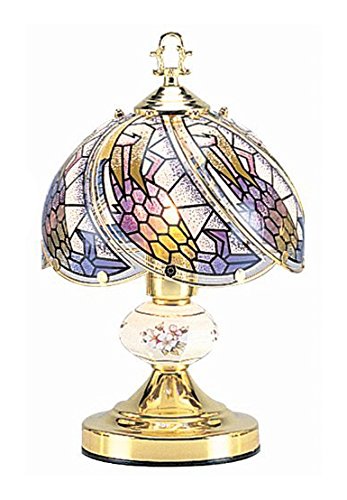 If you’re looking for a unique touch lamp for your living room that will amaze your friends, you can take a look at this one offered by OK Lighting. Users love the Tiffany glass flower theme, but some do note that the product arrived damaged.

The OK Lightning sensor lamp measures 14.25”, and it features glass shades and 3-way touch control base. What’s more, the package includes a 40W lightbulb. However, this gold-plated lamp comes unassembled, and you’ll have to insert the glass into the shade.

In general, users have a favorable opinion of the OK Tiffany glass flower lamp, and they are pleased with its brightness and durability. A reviewer observes that it’s easy to turn the lamp on/off and that it’s perfect for a bedroom. He adds that the light settings are perfect and that he highly recommends it as one of the best touch-control lamps.

Another buyer mentions that it’s not hard to put the lamp together and that you turn it on by touching any metal part. The purchaser also says that the assembly instructions are clear and easy to follow. However, some customers have noted that the lamp is smaller than they expected and that it doesn’t look anything like the provided picture. Some also state that it’s a challenge to assemble it.

Another interesting article we ran across was specialty lighting store list about some common considerations you should keep in mind when you're purchasing a bedside option.

Something we hadn't thought of, is that you may want to invest in a portable option- this means you can easily maneuver the appliance to different locations to provide an alternative lighting source, if need be.

A second consideration is the number of brightness modes and lighting colors that your bedside lamp has-this can be a fun feature to play around with.

Safety is another issue-because LED lights don't actually emit any heat, they can be more efficient and less of a fire hazard, as well the ones that don't have a power cord means that babies and children won't be tripping over it.