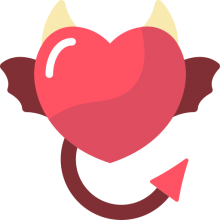 The tattoo power supplies we examined enable you to connect both your shader and liner and toggle between both with a switch flip (Source).

This means both are powered up on stand-by, ready to go- a real time saver (Source). They generally ship with foot pedals and clip cords.

One interesting differentiation is that the TMXX and the pink MonsterPoint both are mounted, as opposed to benchtop-style, options.

​You'll need to exercise a fair degree of caution buying one of these power supplies. Even with our top pick, there is a range of both positive and negative feedback from its user base. The best of the bunch we examined is the MonsterPoint Digital benchtop power supply. 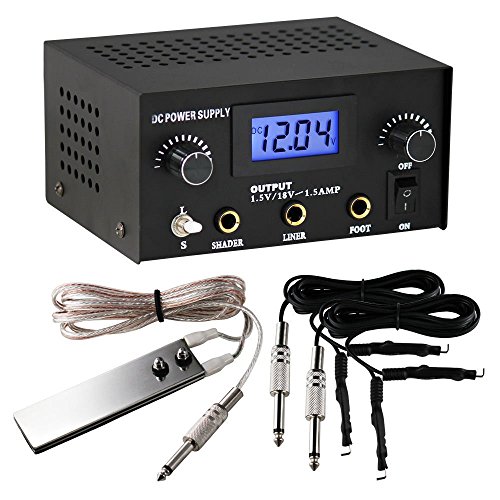 You can digitally control this output, which is designed to powerfully, but evenly, power any tattoo machine out there. In addition, its 110-220v voltage lets you use it in the United States and in foreign countries.

On the downside, some buyers have had negative experiences- with several handy buyers having to open it up to perform minor fixes over time. While others just exchanged it for a replacement unit. 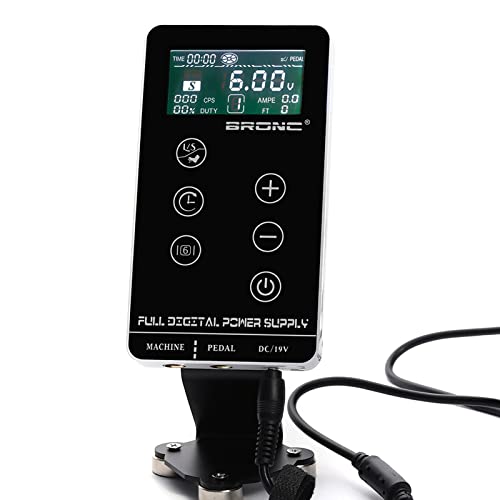 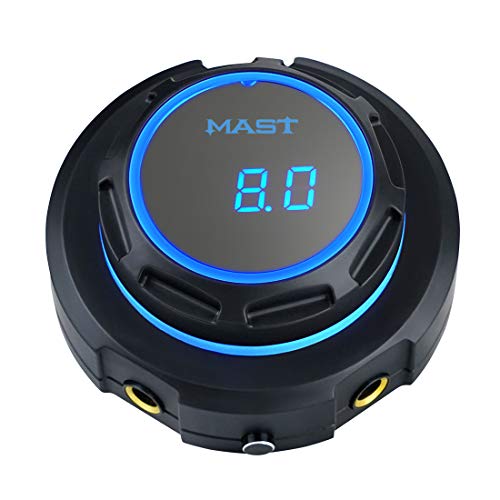 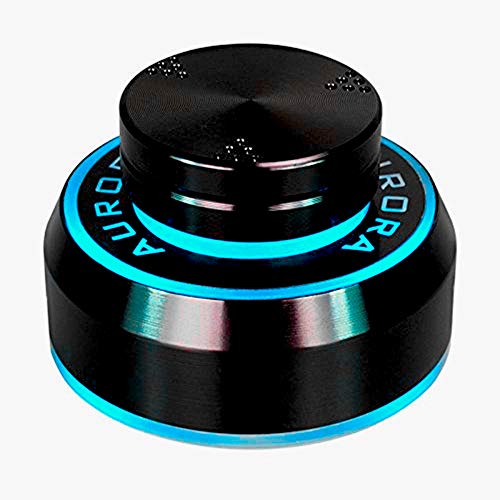 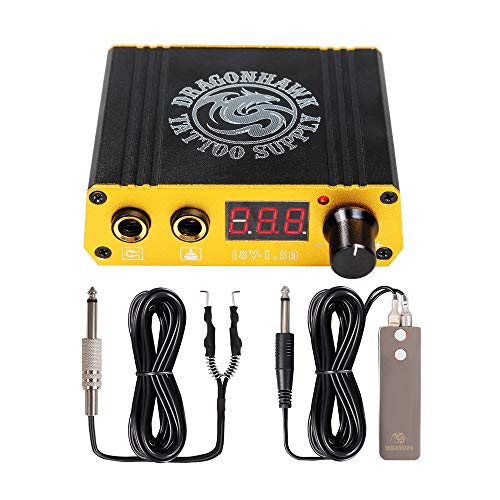 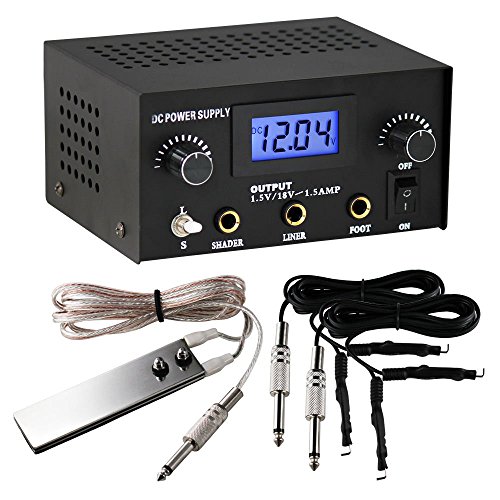 This digital tattoo power supply offered by TattooStar is easy to use, well-built, reliable and safe. Users love that they can set the voltage, but some do note that they had issues with the foot pedal.

An online reviewer observes that the TattooStar dual power supply machine doesn’t overheat and that it’s the perfect tool for his job because he doesn’t have to switch clip cords anymore. He states that it’s one of the best cheap dual tattoo power supplies and that it looks solidly built, but the foot pedal is problematic.

Another buyer comments that the machine doesn’t have issues holding the output when you step on the pedal and that he recommends it to anyone looking for a reliable power supply.

However, some customers have said that they are disappointed by the performance of the power supply and that it’s not nearly as strong as they expected it to be. Some users complain that it broke in the middle of a job and they say that the quality is very cheap. 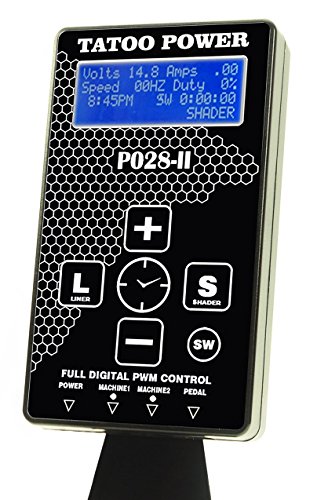 If you need a reliable dual power supply for your tattoo shop, you might take a look at this power machine offered by TMXX. Users love the easy-to-use interface, but some do note that they had issues setting it up.

The 4th generation dual power supply features a blue LCD display, an output ranging from 0 to 18 volts, a built-in overload protection, two footswitch modes, and non-volatile memory. Another great thing about the TMXX tattoo power supply is that you can save up to six different configurations. The package also includes two clips cords, suctions cups, and magnets.

A buyer comments that the new generation dual tattoo supply holds power steady and that it’s a piece of cake to set it up. He adds you can keep the front sanitized by wrapping it in a protective film and that it’s worth its price. Another user mentions that he has been using the TMXX power supply for several months and that he doesn’t have any complaints.

He states that you just have to press a button to switch between machines and that the display shows you all baseline reading that you need. However, some customers have complained that the machine didn’t work at all and that it only beeped.

The dual tattoo power supply machine offered by Dragonhawk is reliable, handy, and suitable for every professional tattoo shop. Users love that the machine is easy to set up, but some do note that it’s smaller than they expected.

The Dragonhawk power supply machine features a switch on the lower left-hand corner, a digital ultra bright LCD screen which is great because it gives an accurate, easy to understand readout, and a 120/220 v conversion switch in the back. It also has a 13 dial potentiometer and a power plug suitable for your country.

A reviewer comments that the LCD power supply works far better than he expected and that he doesn’t have any issues with overheating. He highly recommends it as one of the best dual tattoo power supply machines.

Another customer mentions that the device arrived quickly and that it’s easy to switch between the shader and the liner. He adds that the construction seems solid and that it should last for years. But a user complains that the machine broke very quickly and that he doesn’t recommend it to anyone looking for a durable tattoo power supply. 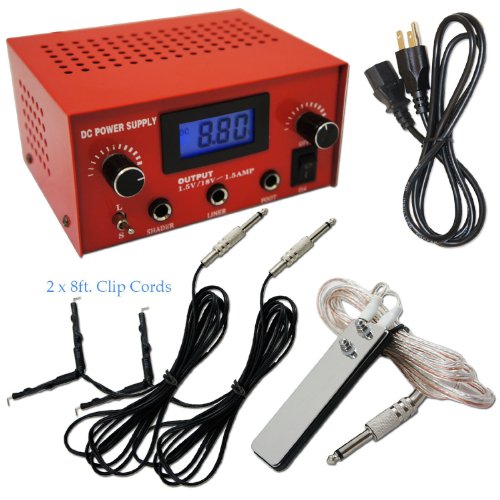 This red dual tattoo power supply offered by 1TattooWorld is well-built, durable, light and easy to move around. Users love the stainless steel flat foot pedal, but some do note that they had issues with the voltage.

The LCD tattoo power supply box measures 5.5” x 4.5” x 3.2”, and it features a blue LCD display which is great because you can get an accurate readout, two 8-inch long clip cords, and one power cord. The switch on the lower left corner allows you to switch between the liner and the shade. Another great thing about this power box is that it has a 120/220 v conversion switch.

A buyer comments that he managed to save the settings for his machines without any issues and that red dual power supply box is light and easy to carry around if you need to travel.

He adds that the quality is outstanding and that he highly recommends it. Another reviewer observes that the power supply machine works flawlessly on 110 volts, but he notes that the foot pedal is not well-made. A user also states that he doesn’t have any issues with the supply box after several weeks and that it’s very handy.

However, some customers have said that the machine fails constantly or that it didn’t start to work at all. Some also note that the LCD screen doesn’t show the numbers properly.

If you need a tattoo power supply box that you can take wherever you go, you might take a look at this pink dual power supply unit offered by Monster Point. Users love the size and the durable design, but some note that there is no manual.

The Monster Point supply unit features an output of 0-18 volts, non-volatile memory, universal input of 110/220 volt, an LCD display that shows volts, amps, speed, and duty cycle, a USA plug, and two mounts – one for desk and one for the wall. Another great thing about this power box is that you can change the voltage in increments – 1v, 2v, 5v.

A purchaser observes that the Monster Point tattoo power unit runs his machines smoothly and that it’s better than previous supply boxes. He is very impressed with its features and design, and he highly recommends as one of the best tattoo supply machines available.

Another happy buyer mentions that it didn’t take him much time to figure the machine even without instructions and that the voltage is consistent. A user adds that the device comes with six preset settings and that it’s easy to mount it. However, some customers have said that the machine stops working randomly and that they struggled with setting it up.

The first digital tattoo machine power supply we examined is provided by TattooStar. They advertise that it lets you connect both your shader and liner to it with an easy switch flip, with control over which one will power on.

This is a real time saver, they say, because both machines will be powered up on standby as you are performing your tattoo work. Because it is a digital option, you're able to select the best voltage- it also ships with a foot pedal. Unfortunately, most buyers have had negative experiences with this particular unit.

The second tattoo power supply we examined is provided by TMXX. This digital option is advertised as providing 0 to 18 V output with an integrated overload safety protection feature. In addition, they market it as a lightweight and portable option that can easily be positioned on workstations or tattoo artists desks. As a digital microprocessor tattoo power supply, you can actually choose the voltage increments.

The third tattoo machine power supply we examined is manufactured by DragonHawk. Unfortunately, buyers have had mixed results with this unit, complaining that it's suffered from durability issues from the get-go.

The fourth tattoo machine power supply we checked out is manufactured by 1tattooworld. It's advertised as a professional-standard tattoo power supply with an LCD display screen, stainless steel foot pedal and two 8 foot long clip chords.

The last tattoo power supply unit we examined is manufactured by Monster Point- it is a microprocessor-controlled option with voltage increment functionality and a regulated voltage output between 0 and 18 V.

Our previous top picks are listed below- check out the comparison table at the top of the page for our current picks.