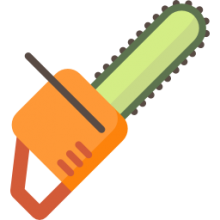 Pocket chain saws provide a compact and portable means of taking down branches, logs, and even standing trees (Source).

While designed for campers, survivalists, many homeowners enjoy using these handheld, manual chainsaws to clear out rugged brush and vines on their property (Source).

Some buyers recommend purchasing 2 of them, that way if one breaks in a big tree you won't have to return to base camp to get another (Source).

Other buyers tuck  away these hand-powered tree saws in their car's emergency bags to have on hand in case a downed tree blocks a roadway.

In all, they are an inexpensive and portable means of high-powered sawing, whether you are gathering firewood or aggressively pruning in your garden. 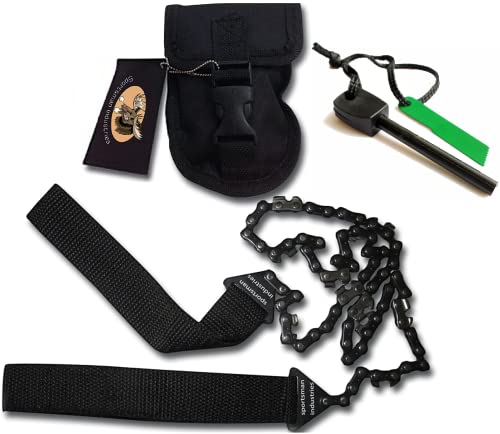 That means it cuts both ways and doesn't get gummed up with wood bits that you have to tediously pick out.

It's built from heat-treated steel and Sportsman says that it can cut a 3" tree limb in less than 10 seconds. 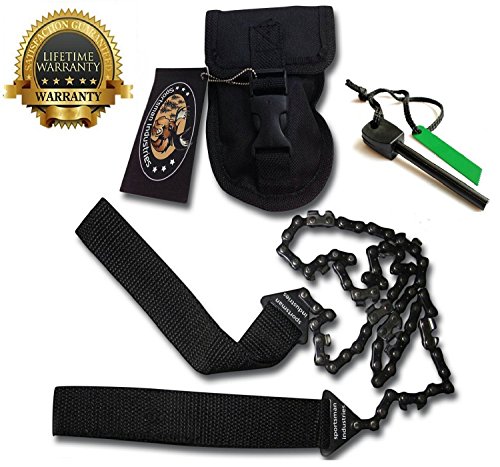 This pocket chainsaw offered by Sportsman is handy, practical, and it’s suitable for any homeowner or hunter. Users love that the saw cuts quickly and smoothly, but some do note that it requires effort.

Another great feature of the pocket chainsaw is that it comes with a nylon front-snap carrying case, and you get a magnesium fire starter as a bonus. You need a regular 5/32 chainsaw file to sharpen this saw, and it has a lifetime guarantee.

A reviewer shares that the Sportsman pocket saw can cut a 12” trunk in three minutes and that it’s very easy to use it. He adds that the nylon pouch doesn’t take much space and that you can carry it in your rucksack. Another buyer comments that the customer support is excellent and that he is very impressed with the functionality of the tree saw. He states that it’s perfect for tight places, but warns that it’s definitely a two-man job.

A user shares that he was skeptical at first about the durability of the pocket saw, but the quality is exceptional, and the fire starter works great. However, few customers have complained that the camping saw requires too much manual labor and that it gets jammed on big trees. 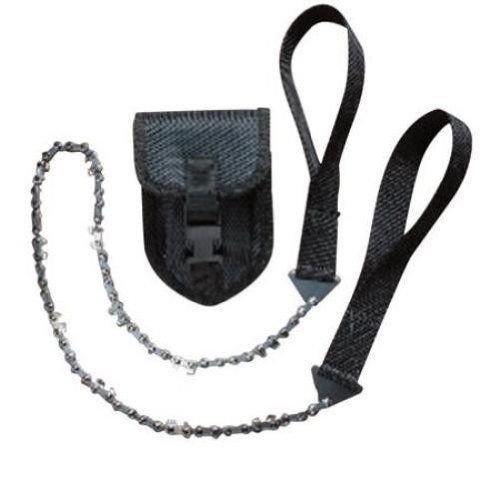 If you love to go camping in the woods, you might want to take a look at this survival pocket saw offered by Chainmate. Users love the price and the sharp teeth, but some do note that the package was labeled “Made in China”.

The Chainmate pocket saw measures 3” x 4” x 2”, and it’s 24-inch long. It features carbon steel teeth, which is great because it’s suitable for all types of wood and it won’t get dull as quickly as similar products. You also get a storage pouch and a belt clip so that you can easily store the saw.

A customer comments that the hand saw is light, flexible, well-made and that it takes little space in a backpack. He advises that you wear gloves to protect your hands from the straps. Another reviewer observes that the 24-inch tree saw cuts through 5-inch branches quickly and that it’s very sharp and sturdy.

He highly recommends it as the best pocket chainsaw for camping. A user also states that the handles are well- attached to the chain and that you can use the survival chainsaw to cut high branches with no issues.

However, some customers have complained that the saw gets bind from time to time and that it requires a lot of effort. Some users also note that the straps wore down quickly and that the teeth are too far apart. 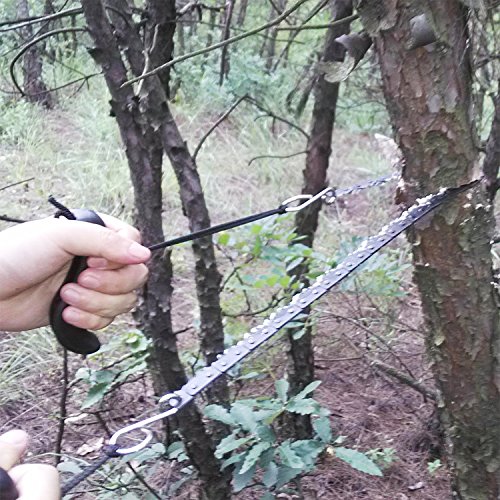 The survival pocket tree chainsaw offered by Happycamping is light, flexible, sturdy and sharp. Users love that the hand saw has multiple applications, but some do note that there is no carrying case.

The hand chainsaw features a length of 39 inches (including the handles), a 19-inch saw blade, high-strength tensile ferromanganese construction, a 30-day guarantee, and a weight of 4.2 ounces. Another great feature of this portable pocket chainsaw is that it’s suitable for wood, plastic, rubber, bones, and soft metal.

It doesn’t need any special maintenance, and you can resharpen it easily.

In general, users have a favorable opinion of the Happycamping survival pocket saw, and they are pleased with its performance.

A buyer comments that the handles provide a good grip and that the cutting teeth are sharp. He adds that the saw rarely gets stuck and that it’s a great tool to have around not only for camping but for yard work, too. Another reviewer mentions that he was pleasantly surprised by the quality of the Happycamping pocket chainsaw and that it arrived quickly and in excellent condition.

A user also notes that he can cut through 2-3-inch thick branches for seconds and that the chain is strong and durable. However, a couple of customers have complained that it’s difficult to use the saw and that it’s not really 39-inch long. One user also complains that the chain broke on the second use. 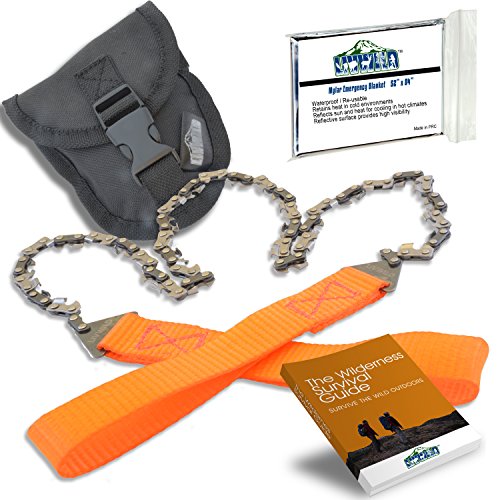 If you are looking for a top-notched portable camping chainsaw, you might take a look at this pocket tree saw offered by LivWild. Users love that the saw comes with a belt pouch, emergency blanket, and an ebook, but some do note that it’s expensive.

The LivWild pocket chainsaw measures 4.8 x 3.9 x 1.8 inches, and it features a 26-inch long chain, bi-direction blades which are great for smooth cutting, industrial-grade, heat-treated steel body, and a weight of 9.6 ounces. Another great feature of the portable saw is the heavy-duty orange handles with metal brackets, and you can resharpen it with a 3/16 file.

A buyer comments that the teeth of the pocket chainsaw are very sharp and since there are teeth on every link the saw is very effective. He highly recommends it as the best survival pocket saw. Another reviewer mentions that this saw is a necessity if you ever go camping in the woods and that it can cut 6-inch log for several minutes.

He states that it’s perfect for the Boy Scouts and that the customer service is exceptional. A purchaser also observes that the handles are very comfortable, but sturdy and that it has plenty of cutting power. However, some customers have complained that the belt pouch isn’t durable and that it tore pretty quickly. A user also notes that the saw wasn’t as efficient as he expected. 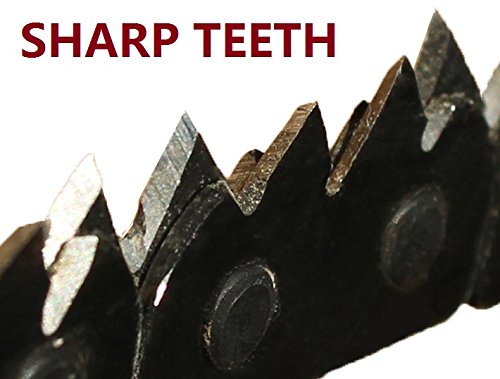 This camping pocket chainsaw offered by Croc is sharp, durable, an excellent choice if you’re going camping. Users love the sharpness and the design of the saw, but some do note that the handle straps are weak.

The Croc camping chainsaw has a 21-inch chain (36-inch if we include the handles), and a new and improved design which is great because you can cut wood three times faster. It also features over 92 sharp teeth, a comfortable handle, and a high-quality steel construction. The package also includes a convenient belt pouch for storing the pocket saw and a 60-day guarantee.

A buyer comments that he managed to cut a 3-inch dry oak branch faster than he anticipated and that the Crock survival compact chainsaw is one of the best.

He observes that the pocket saw is light and easy to carry wherever you go. Another reviewer mentions that he was very impressed with the sharpness of the Crock small chainsaw and that it can cut through everything, ever large tree.

He highly recommends it as the best pocket chainsaw. A user adds that the handles are comfortable and that it’s easy to use it. However, some customers have complained that the pocket saw gets stuck very often and that the links snapped very quickly.

The first pocket chainsaw we examined is manufactured by Sportsman Industries- it's 36 inches long and is marketed as a handy survivalist tool for campers, hunters and homeowners.

As a tree saw, it's targeted towards individuals concerned about emergency preparedness and is often used by the Boy Scouts when they go on the camping expeditions.

The manufacturers are highly confident in their product, saying that it is equipped to tear through bulky tree trunks, and branches in a matter of seconds employing rugged handles and metal brackets that you can actually re-sharpen. As well, it's built with an extra-long chain which means that you can pull longer strokes for faster cuts.

The second pocket chainsaw we examined is the Chain-Mate survival saw. It's available in three different sizes- a 24-inch, 36-inch and 48-inch option, it is marketed as an efficient way to quickly gather firewood while camping.

As well, it is a USA-made tree saw that ships with a belt clip and pouch. This rope chainsaw is built with carbon steel teeth and is designed for portability- an ideal option for mountain bikers, snowmobilers, hikers, campers and different types of outdoorsmen.

They say, whether you are looking to clear trails or gather quantities of firewood, it can be used for fun or work, despite being a military-grade survival chain blade saw. In terms of its construction, its metal bits have cutting edges that are riveted together in a braid.

The third portable, folding and chain saw we examined is manufactured by Happycamping. It has a 39-inch long blade, including its handles, and the saw blade itself measures 19 inches and is designed to be a versatile option for children and adults alike.

It's marketed as a pole saw replacement, ideal for cutting soft metals, plastic, rubber, branches and even bones, keeping the hands safe while providing powerful and durable sawing action.

The fourth camping pocket chainsaw we examined is manufactured by LivWild. It's advertised as an especially sharp cutting blade manufactured with three times as many teeth as traditional options- built with flexible chainsaw links to produce bidirectional motion as you cut.

As well, the manufacturers are eager to impress that it's built from industrial-strength, heat treated steel with a chain length of 26 inches that self-cleans as you are sawing. As some enterprising users have discovered, you can actually attach ropes to the handles to access branches and limbs that are particularly high up.

Overall, the manufacturer says that it is useful for thick logs, branches, or even taking down an entire tree- meaning you can quickly collect firewood for your campfires or just prune branches in your backyard garden.

The last pocket chainsaw we examined is manufactured by Croc. It features over 92 sharp teeth designed to fit into backpacks and manufactured from high-quality steel. It is a Chinese-made product with viewers endorsing the sharpness of the teeth, saying that they are ground sharp, as opposed to being stamped or pressed.