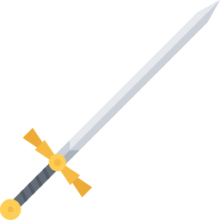 In this post, we’ll show off some amazing 2B Cosplay. And we’ll show you how you can achieve the same look with easily sourced costume elements.

Many of us have favorite characters from comic books, movies, books, games, anime, and manga, etc., and perhaps we often dream what it would feel like to see these characters come alive in real life. Cosplay (or costume play) fulfills this wish to some extent (Source).

If you are wondering what it means, it refers to the act of people dressing up in costumes to role-play characters from books, movies, video games, TV shows, and comics.

All over the world, you will find cosplayers taking to the street or attending events throughout the year.

Albeit at different times, where they dress up in the attire and accessories similar to the characters they play, and happily pose with fans or for the camera.

In fact, the cosplayers love the challenge of transforming into the characters they want to showcase and happily jump into the act from time to time.

2B cosplay refers to cosplaying 2B – one of the main characters of the action role-playing game Nier: Automata. Here’s a great example from Instagram:

Below, we’ve compiled some of the best-selling styles if you want to try out this cosplay. 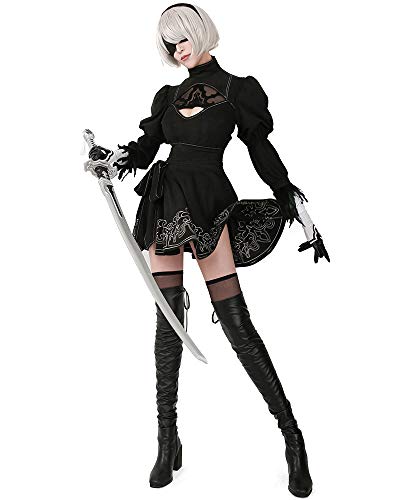 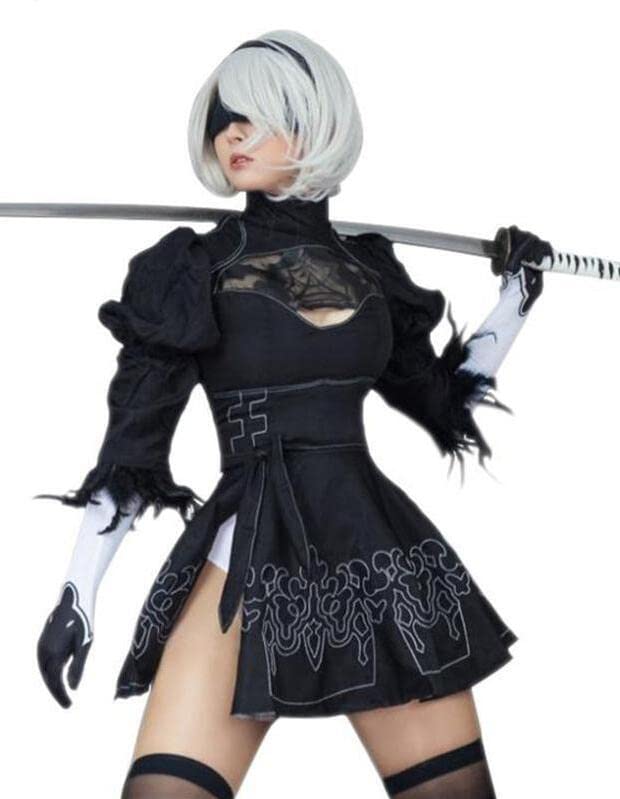 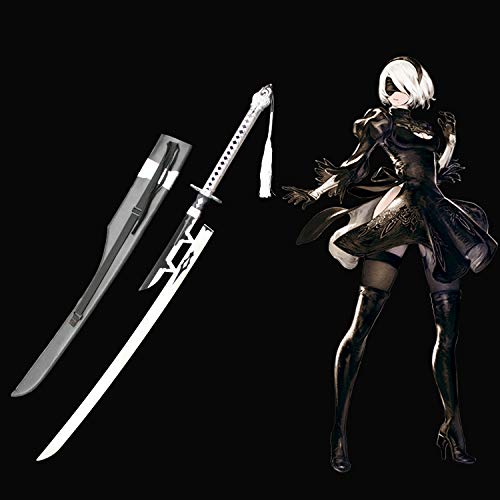 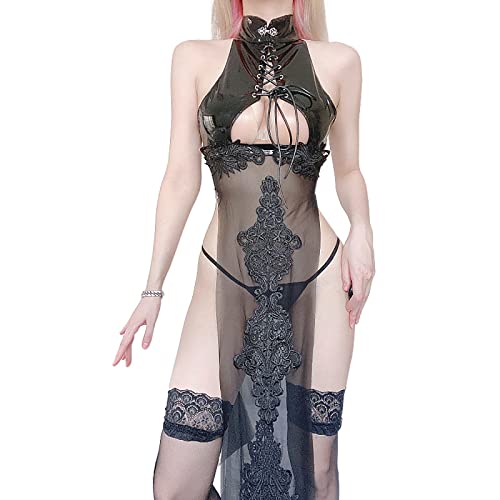 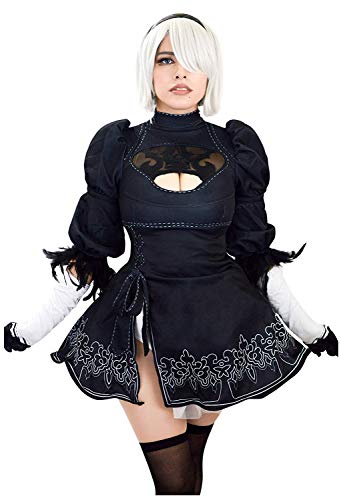 The game Nier: Automata is split into three chapters, where each has a different protagonist and its own ending. In part one, YoRHa No. 2 Model B (called 2B in short) (Source) is the protagonist.

She is a YoRHa android, who is calm and composed, and created to fight the humanoid machines (antagonists) that have invaded the planet. 2B is deployed as the automated YoRHa infantry’s member and is accompanied by Pod 042 always, who’s a floating box-like robot that performs as her ranged weapon.

The cheery Operator 6O is 2B’s support officer, whose actual goal is to set up 2B’s frame of mind. As an all-purpose battle android, 2B comes equipped with a wide range of weapons that are ideal for close-range combat. Using her Pod support system, she can even attack from a distant range.

Thanks to her standard-issue military visor that she removes rarely, 2B’s eyes remain obscured under it. 2B has a partner in 9S, who is an emotional male scanner android. 9S shows more emotion than other androids of the YoRHa units.

Now that you know who 2B is and who her partner/side-kicks, as well as antagonists, are, you can opt for 2B cosplay alone or bring along friends to play the other characters as well for some added fun.

For 2B cosplay, your complete costume set must include the 2B black gothic dress, a short silvery wig, thigh high stockings and thigh high boots (both in black color), white colored long gloves – about 18 inches in length, and an unsharpened Katana sword with white nylon handle.

If you are a DIY enthusiast, who is ready to invest the requisite time and effort, you can make your own 2B cosplay costume.

You can start from a base 2B set and add a range of accessories and weapons to give the entire attire an authentic look – exactly like the character looks in the game.

You may even try to make the dress from the scratch though a lot of effort needs to go into it – from getting the cutout and mesh design right, to ensuring the dress’s pattern is just like it is in the game, and selecting the right fabric that falls beautifully to make you look sexy.

If you’re not up for it, you better begin with a base 2B set. You can take a look here to get a better idea of the basic items you will need for this DIY project. You may even take some inspiration from how this person crafted her 2B outfit from scratch to impressive end-results.

From helping you create your 2B attire by taking the DIY route, to cosplay pattern tutorials, makeup tutorials, and more, you’ll get a wide range of 2B cosplay tutorials online, from which you can take your pick.

Many shoppers often focus on the dress and forget about the wigs and boots. According to some online tutorials, you should give equal importance to footwear and accessories. Instead of getting cheap boots that may ruin the entire look, you should buy boots with the original look, even if they come with a steep price tag.

After all, you don’t want your Nier cosplay costume to be a dud. When it comes to the wig, you should stay away from spray-on color as it makes your hair look cheap and messy.

Getting The Makeup Right

Lastly, you shouldn’t forget the makeup. In case you need some help, this Nier Automata 2B cosplay makeup tutorial should guide you the right way:

Though 2B is a female character, even men can have fun with 2B cosplay. And that’s exactly what Datto does.

This YouTube user dons the outfit of 2B with the full accessories (boots, sword, gloves etc) and makeup, and then steps out in style. While standing in a busy shopping area, much to the amusement of the passers-by, Datto is shown having fun as are some other people who interact with him.

The YouTube video of Datto 2B cosplay shows how fun cosplaying could be. So, if you have a favorite character that you want to take up for your cosplay project but aren’t sure about a gender role-reversal, you can take inspiration from Datto.

2B and 9S Cosplay

If you don’t like cosplaying alone, you can ask a friend or a fellow cosplayer to play the character of 9S while you play 2B.

However, you should have a clear understanding of the complicated relationship these two characters share to bring out their true colors while cosplaying. Remember – 2B’s role was to make sure that 9S wouldn’t find out the exact nature of Project YoRHa by executing him if he, thanks to the natural inquisitiveness programmed into him, dug too deep.

And that’s exactly why during the period of hundreds of operations, 2B was compelled to execute 9S and wipe his memory innumerable times, though she came to hate this act as it pained her after forming a close bond with 9S while working with him.

Since there are some similarities between A2 and 2B (both belong to the YoRHa android line), you may find a2B cosplayer partnering up with an A2 cosplayer.

If you too have similar plans, you should know a few things about A2. To begin with, A2 or YoRHa Type A (Attacker) No.2 serves as the protagonist of NieR: Automata – Branch C. She’s also Branch D’s final boss.

It was the combat data gleaned from her and her comrades that was put to use for creating the superior lines of current battle androids including 2B and 9S. A2 often keeps to herself as she dislikes speaking. Three years before the incidents of NieR: Automata, A2 was the first YoRHa squadron’s member.

During the early years of the 14th Machine War, she was deployed to Earth as part of the Pearl Harbor Descent. At that time, her alias was No2, which has been parsed into “Number Two” in Automata.

Though 2B seems to be the most popular character for cosplaying from the world of Nier: Automata, you have some other choices too in the form of 9S, A2, etc. However, if you are planning a 2B cosplay, it’s best to find a couple of friends who’ll bring alive these other characters from the world of Nier: Automata to make it all the more challenging and fun.