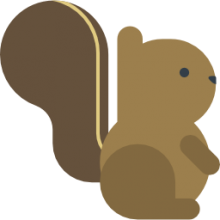 The first is entertainment and the second is pest deterrence (Source).

Homeowners purchase them to distract pesky squirrels from attacking bird-feeders for food (Source).

By installing them in remote areas of the yard they can effectively sequester squirrels away from destroying vegetable gardens, harassing bird nests, attacking bird feeders, and other annoying, backyard behaviors (Source).

On the other hand, some homeowners purchase them because they are amused watching squirrels interact with the feeders (Source).

The Pennington feeder and Heath do ship with mounting hardware.

Depending on your squirrel activity, you may have to replace these feeders every couple years. Though a couple handy homeowners we spoke with told us that they reinforced their feeders with brass edges and bracketed bottoms to enhance their longevity.

The Five Best Squirrel Feeders For 2023 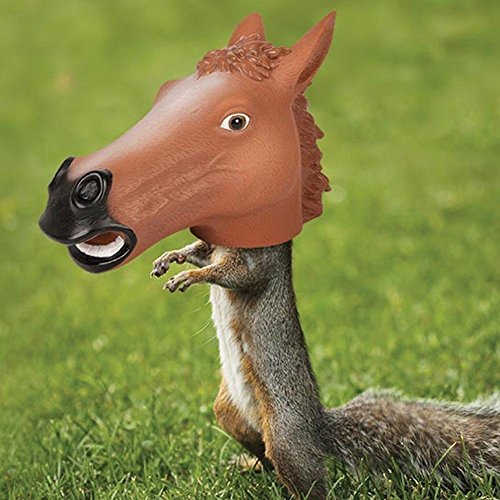 This horse head squirrel feeder offered by Accoutrements is a good option for someone who needs a funny-looking hanging feeder. Users love how hilarious it is to watch squirrels with horse heads on, but do complain about it not lasting too long.

This product is made of vinyl with dimensions of 6-1/2″ x 10″ (16.5 cm x 25.4 cm) and it has a hole on top for hanging.To reach for food a squirrel has to stand on hind legs, looking like it is wearing a horse mask.This hanging vinyl squirrel feeder will bring you laughs as you drink your morning coffee every day. This squirrel feeder might be a solid choice if you are looking for a squirrel feeder that will give you hours of entertainment.

In general, users have a favorable opinion of the Accoutrements hanging squirrel feeder, saying that not only does it work great but it is also very entertaining to watch little squirrels with horse heads in your yard. One happy purchaser advises using a wire type hanging apparatus since squirrels are able to chew through rope or string.

However, some buyers complain about the material being too weak. They say that rodents destroy it in a couple of weeks, thus making the product too expensive for such a short life.

This squirrel snacker offered by Pennington is a good option for those who need a multi-functional feeder. Users love the value for price of this product, but some complain about certain construction flaws.

This 2.75 seed capacity feeder is made of naturally weather-resistant eastern red cedar in an Amish factory. It is easy to mount with the included hardware. Pennington cedar feeder can be used for feeding squirrels or birds. All you need to do to transform it from a squirrel feeder into a bird feeder is toloosen the screw on the side of the feeder and flip the front pane down. If you are looking for a squirrel and bird feeder, this combo-feeder might be a good option.

In general, users have a favorable opinion of this2-in-1 animal feeder and they are satisfied with the price, solid construction and quality. One happy purchaser says that it is easy to set it up.

However, one purchasers complains about receiving the item with cloudy and not clear plastic part which cannot be cleaned. Another one says that he would prefer if the feeder wasn’t stapled together. 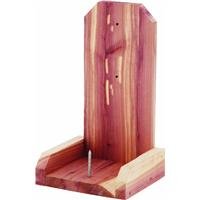 If you are looking for a top-rated squirrel feeder, you might want to consider this one offered by Heath Outdoor Products. Users like its sturdy construction and good quality, but some complain about certain minor design flaws.

This product is made of weather and decay-resistant cedar wood. It can hold one ear of corn. The feeder features pre-drilled holes which is great because you can easily mount it with included hardware on a pole or a tree. This squirrel feeder could be a good choice if you are looking for an effective way to discourage squirrels from feeding at bird feeders that you have in your yard.

In general, buyers are very satisfied with thequality. They state that it is well constructed, very strong and well built. One happy reviewer shares that the construction is solid and that the feeder looks very natural out in the backyard. Another one adds that it is sturdy and holding up nicely after being exposed to all weather conditions.

However, several buyers have complaints about some minor design flaws. One user advised improving the product by attaching the bottom floor better (e.g. with an L-shape bracket with screws to keep it secure). 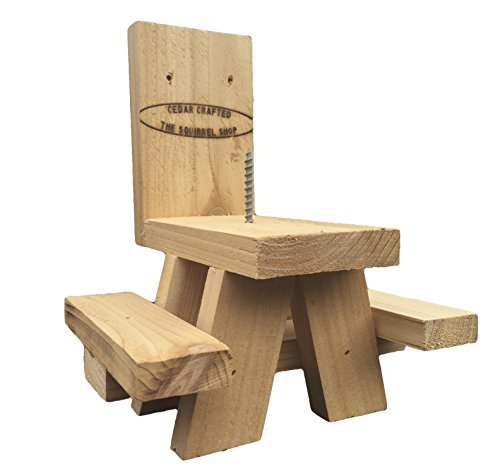 If you are looking for a squirrel feeder, you might want to consider this picnic table shaped feeder offered by The Squirrel Shop. Users love its quality and price and so far have no complaints about the item.

This productis solidly built from naturally decay-resistant cedar. It can be attached to wooden surfaces easily with two screws that are included in the package. The picnic table squirrel feeder features a two-inch screw that works as a holder where you can place an ear of dried corn on. If you are looking for a squirrel feeder with an interesting design, this might be a goodoption.

In general, users have a very high opinion of this Squirrel Shop picnic table squirrel feeder, and they praise its high quality and fair price.One user says that it is a great idea that provides free daily entertainment. Another one comments on well-built construction of the feeder.

This cedar squirrel feeder offered by Kaytee is a solid option for someone who needs a hand-craft squirrel feeder. Users like that the item does its job, but some do complain about it being easily destroyed by squirrels.

This product is made of renewable, durable red cedar. Impregnation with natural oils helps resist cracking, decay, bacteria and fungus. This wildlife feeder hand-crafted by the Amish is well-constructed, attractive and a great value for the price.This cedar squirrel feeder seems like a solid choice if you are looking for a place to put a nutritious meal for small animals and keep them coming back to your backyard.

The general user consensus concerning the Kaytee squirrel feeder is that it works great. One satisfied purchaser shares that it doesn’t take long for squirrels to learn how to get the food by opening and closing the lid. Another one says that it is a nice looking wooden feeder.

However, some buyers complainabout the construction of this animal feeder stating that it doesn’t last too long because the squirrels chew and destroy it easily.

The first squirrel feeder we examined is the Kaytee Cedar option. It is advertised as an Amish-manufactured the product, completely handcrafted and reinforced with natural oils to ensure that it doesn't decay, crack or become infested with fungus and bacteria over extended outdoor use.

It arrives assembled and one reviewer said that it holds around 4 cups of peanuts- though if you were thinking about attaching it to a pole, you'll have to jerry rig your own assembly because it doesn't have any mounting equipment included. It's filled from the top, with one reviewer saying that chipmunks often are able to access it.

The second squirrel feeder we examined is supplied by Accoutrements- it is the Horse Head squirrel feeder, a novelty and gag item that requires squirrels stand on their hind legs to capture peanuts and sunflower seeds, making them appear like they're wearing a horse mask. This is a hanging squirrel feeder made from a vinyl that includes a hole at its top for hanging it with a string.

The third squirrel feeder we examined is the Pennington Cedar Squirrel Snacker- this is a USA-made product, manufactured by the Amish in a Red Cedar build. It ships with mounting hardware with a top lid that shuts airtight to keep squirrel food dry- attaching to fences, posts, and trees. It's advertised as a means of distracting squirrels from bird feeders- a common annoyance for many homeowners.

Buyers say that it was easy to assemble and mount, well-priced and solidly built, providing birds relief from squirrel harassment, as well as wildlife amusement for homeowners.

The fourth squirrel feeder we examined is manufactured by Heath Outdoor Products- it's built to hold one ear of corn or one corn log. It's built from Cedar and is advertised as a decay and weather-resistant option that can be mounted with the included hardware on trees or posts.

Another amusing option is the picnic table style squirrel feeder from the Squirrel Shop. It's meant to be used with corn and is built from Cedar to be weather and rot resistant.

The way it works, dried corn cobs are positioned on the top of the picnic table with a pair of 2-inch screws used to reinforce it in place. Squirrels will then feed on the corn cob, making it appear as though they are sitting at a dining table outside.