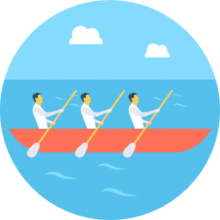 A rowing machine is a style of indoor exercise machine that mimics the feel of rowing a watercraft. They can be a great solution for muscle toning, weight loss, enhancing cardiovascular stamina, targeting both upper and lower sections of the body (Source).

They are popular home workout solutions because they are generally compact and portable- though the high-end fluid-rowers need lots of dedicated floor space (Source).

There are four primary types of rowing machine on the market. They're differentiated by the resistance mechanism they employ (Source) and how closely they emulate the experience of actual water rowing.

The difference is that, while the air and water style adjust resistance with each pull, emulating the feel of actually rowing, the hydraulic and magnetic styles don't have this type of adaptive resistance. You will set resistance levels and row against that setting, as opposed to feeling more resistance the harder you row (Source).

The bottom line is that if you want a top quality rowing experience that emulates rowing on water and price isn't a consideration, the air resistance style Concept2 is a great buy. The Concept2 also combines with proprietary software and smartphone apps- you can read about the different options on their site.

If you just want a workout with a compact piece of equipment at a low price and don't really care about the 'feel' of rowing, check out a hydraulic resistance style rowing machine like the Stamina Body Trac Glider.

The 4 Types Of Rowing Machines

Air Rowing Machines: the resistance is produced from air that flows over an internal flywheel. This is one of the more popular styles of indoor rowing machines because the air flow resistance adapts to your stroke as opposed to magnetic rowing machines.

They generally have really smooth actions that replciate the feel of actual water rowing, producing little wear on the machine over time, though they tend to be louder than other options (Source).

How To Use An Air Rower

Magnetic Rowing Machines: work by adjusting the distance between magnets and the spinning flywheel that is chained to the handle Generally, you'll be able to adjust the resistance using either a digital display or by manipulating mechanical sliders.

They provide an even stroke- unlike air and water that adjust resistance with the strength of your pull. These are very quiet options and are commonly the most compact for portability and storage (Source).

How To Use A Magnetic Rower

Water (Fluid) Rowing Machines: use paddles and water to generate resistance. The way they work, a water paddle (flywheel) sits in a tank of water that is connected to a chained handle revolves the handle against the water, providing resistance.

So, the faster you row, the more resistance you get. These tend to be quieter than air rowers, but also are more expensive and larger. Though, they tend to last a long time because of their simple designs (Source).

How To Use A Water Rower

Hydrau﻿﻿lic Rowing Machine﻿﻿s: provide resistance by the pistons attached to the handles. Resistance comes from pulling against the fluid or air inside its cylinders.

These are generally the most inexpensive and smallest options, but don't provide adaptive resistance as you row (Source).

How To Use A Hydraulic Rower 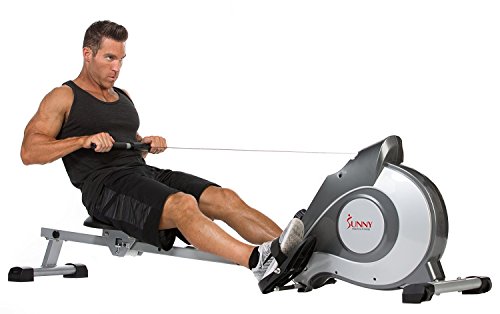 This magnetic rowing machine offered by Sunny Health & Fitness is a good option if you want to achieve your ideal body at home.Users love the effectiveness of this rower, but do complain about the monitor.

This product has a simple, single motion design that engages every major muscle group. Its frame is built from durable stainless steel and it uses magnetic tension with 8 levels of adjustable resistance. It features a grip pulse sensor that displays your heart rate while an LCD display lists your workout statistics. This item seems like a good choice if you want a piece of exercise equipment with a quiet and smooth-gliding design.

The general user consensus concerning the Sunny Health & Fitness magnetic rowing machine is that it is a great rower for the price.Many users love that it is incredibly quiet and that it offers a serious workout with variable resistance. They add that the assembly is very easy.

However, many buyers complain about the monitor, stating that it is too tiny and that it stopped working soon after the purchase. One dissatisfied purchaser complains about uncomfortable foot pads. 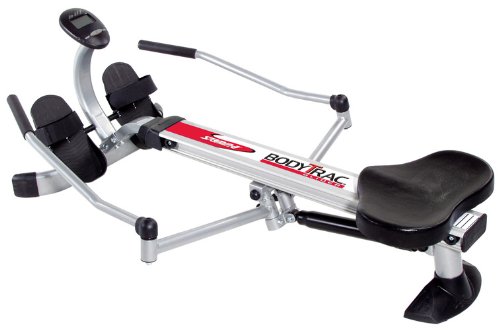 This rowing machine offered by Stamina is a solid option for those who have a limited workout space.Users like the functionality of this piece of equipment, but do complain about the foot straps and its quality.

This product has sturdy, steel frame construction. It features an adjustable gas-shock resistance, a multi-function monitor which shows time, stroke count and calories burned. It can fold easily for convenient storage. This home gym might be a solid choice if you are looking for a piece of equipment that engages all major muscle groups, including legs, back, arms, abdominals and buttocks.

In general, users have a favorable opinion of the Stamina Body Trac Glider Rowing Machine.What they praise is that it is easy to put together and easy to use.They conclude that it is a great machine for the price.

However, many buyers express complaints regarding the foot holds which are uncomfortable and the foot straps which allow your feet to easily slip out. A frequent complaint is that the machine is not made of a high-quality and durable material. 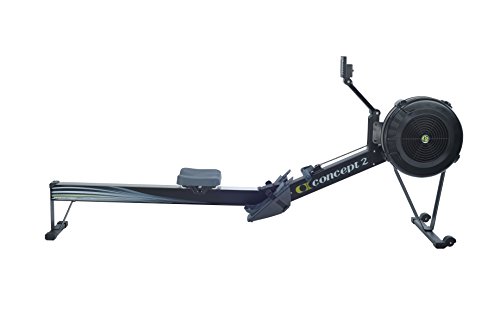 If you are looking for a top-rated indoor rowing machine, you might want to consider Model D Indoor Rower offered by Concept2. Users love the performances and quality of this piece of equipment, but do complain about its price.

This product offers an effective full-body, low-impact workout. It features a flywheel design, which is great because it minimizes noise while maximizing a smooth feel. Other features include a monitor, adjustable footrests, ergonomic handle and caster wheels which make it mobile. You can choose between two colors: black and grey. If you want a rowing machine that it is used by Olympic-level athletes for everyday training, this might be a good option.

In general, users have a favorable opinion of the Concept2indoor rowing machine and they agree that it is very solid, sturdy and made of high-quality material to last. Many of them state that it has great rowing motion and that it is ergonomically made. They add that it is pretty quiet and easy to assemble.

However, many purchasers complain about the price, stating that there are cheaper options which offer the same workout experience. One buyer says that for the price he would expect additional features, such as electronic resistance, a rail mechanism that was topped with stainless steel and a monitoring system that plugs into the wall. 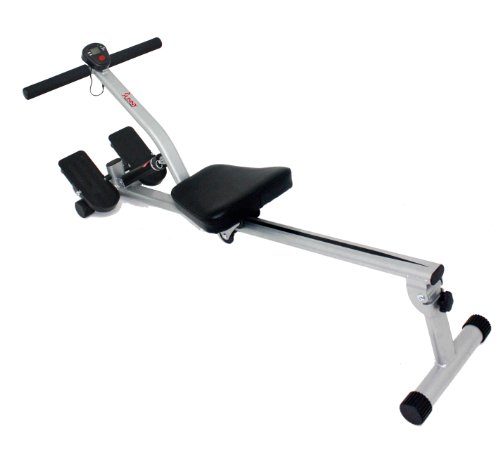 This rowing machine offered by Sunny Health & Fitness is a solid option for those looking for building a strong back, as well as increasing their metabolism.Users like its simplicity and effectiveness, but do complain about it being cheaply made.

This product features 12 levels of adjustable resistance. Other features include a comfortable, smooth running seat, pivoting foot plates for added comfort, adjustable foot straps and an electronic monitor. This item could be a solid choice if you’re looking for an efficient way to burn calories and fat without impacting your joints.

In general, buyers have a positive opinion of the Sunny Health & Fitness rowing machine. They state that it is simple, effective, easy to put together and reasonably robust. All in all, they agree that it is a piece of equipment which offers a good workout for the price.

However,many buyers complain about it being cheaply made, sharing that their item broke after only several times of use. Other complaints regard the hard and uncomfortable seat and the machine not being suitable for tall people. 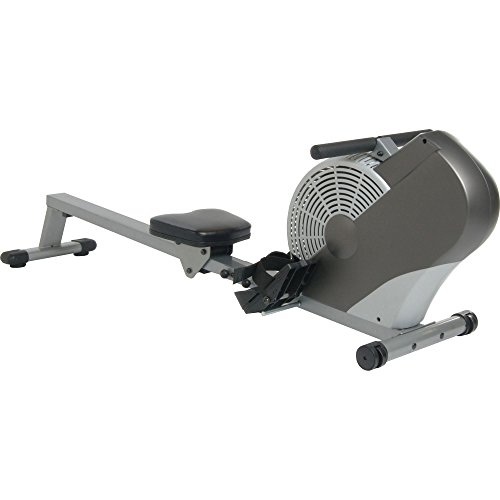 If you are looking for a wind-resistance rowing machine with multi-function performance monitor, you might want to consider this one offered by Stamina. Users like its effectiveness, but have complaints about several design flaws.

This product is designed with an oversized seat rail for smooth sliding, and its large foot plates accommodate a variety of user sizes. It features floor protectors which safeguard your workout area and prevent skidding, while built-in wheels offer convenient portability.If you are looking for a rowing machine that offers a smooth, solid and comfortable rowing workout at home,this might be a good option.

In general, users are happy with the Stamina Air Rower. What they like in particular is that it is effective, easy to set up, as well as that it has plenty of space for leg extension and that it folds up conveniently for easy storage in a closet.They agree that it is an excellent addition to a home gym.

However, many purchasers complain about it being very noisy. They also complain about certain design flaws, namely the lack of tension adjustment and too small seat.

The Magnetic Sunny Health And Fitness

The first magnetic rowing machine we examined is provided by Sunny Health and Fitness. It employs a magnetic tension system to provide different amounts of adjustable resistance to capitalize on the full benefits of cardio exercise. It has a weight capacity of 250 pounds and includes integrated wheels so you can maneuver it throughout your home if you are doing cardiovascular exercise in your living room or basement.

The second rowing machine we examined as provided by Stamina- it's marketed as a home exercise solution that is portable and folds up should you need to store it. It's marketed as a complete body exercise kit for low impact cardio.

Regarding the benefits of rowing exercise, these machines specifically target your arms, glutes, back, hamstrings and shoulders. They actually produce a range of different options- some of them glide with hydraulic resistance, some are wind-resistance rowers, and some are magnetic rowers.

Examining their marketing materials, they pitched this particular cardiovascular exercise machine as ideal for homes, while effectively emulating the smooth exercise motions of water rowing.

The third option is a higher end solution- it's the Concept2 rowing machine. This is a flywheel option that you can separate into two different pieces should you need to store it. Indeed, if you've got extra money to spare, this commercial-grade solution is widely considered best in class.

One of its primary distinctions is the quality of its monitor-because it is USB compatible you can download all of your workout information as well as wirelessly monitor your exercise heart rate.

The Hydraulic Sunny Health And Fitness

The fourth option we examined is the Sunny Health and Fitness rowing machine- this is a relatively inexpensive option compared to the Concept2.

The last option we examined is the Stamina air rower -it's a wind resistance rowing machine with a monitor that will tell you how many calories you burn, your speed, your time and the distance you've traveled.