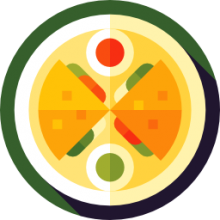 A quesadilla, technically, is a type of tortilla that you can stuff with cheese, shrimp, peppers, tomatoes, chicken, beef and pork (Source).

There are a range of options on the market (Source).

However, most of them are junk.

The best of the bunch is the Santa Fe Quesadilla Maker (check out some recipes specifically for it here and some other fantastic recipes here). While the cord is a little too short, clean-up can be somewhat annoying, it does perform well enough to be a recommended option in this product class.

The way it works, you first plug it in, then wait for the unit to heat up, insert the 1st tortilla, add your fillings on top of it, then add the 2nd tortilla, close maker's lid, and then let it cook.

This unit created quesadillas in under 5 minutes and can accomodate tortillas that are up 12 inches in diameter. It uses non-sticking, heated cooking plates- and buyers advise to wipe the unit down soon after use to ensure ingredients don't dry and become calcified.

It also includes a built-in drip tray- though you might want to supplement that when you first start out as users describe initially overfilling this unit with beans, cheese and lettuce, which can cause overflows. Santa Fe does provide a 1-year limited warranty- so keep your receipt!

The Best Quesadilla Makers For 2022 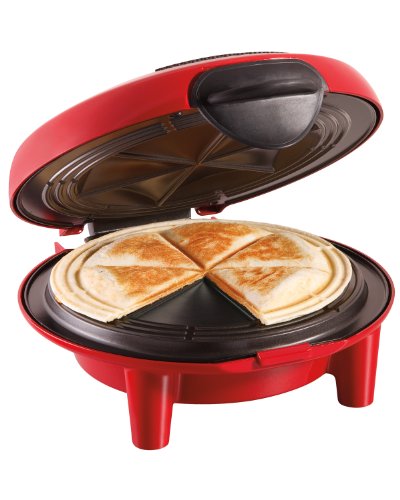 This quesadilla maker offered by Hamilton Beach is handy, quick, and well-made. Users love that the maker is easy to use, but some do note that it’s smaller than they expected.

The quesadilla maker measures 10.5” x 9.5” x 4″, and it features a nonstick surface that you can wipe clean with a cloth, a locking lid to prevent messes, a power indicator, a preheat indicator light and a weight of 4.6 pounds. You can use the Hamilton maker to have six wedges of quesadillas ready in about five minutes, and you can store it upright for convenience.

A buyer comments that the Hamilton Beach maker delivers perfect quesadillas and that they get ready for about three minutes. The reviewer adds that she uses for 8-inch tortillas and that it’s easy to clean it afterward.

Another happy user mentions that she has been using the quesadilla maker for ten months and that the indicators are easy to figure out. A reviewer adds that the maker heats up quickly and evenly and that he highly recommends for a Christmas gift. She says that the maker is so easy to use that her children can make their own quesadilla without making a mess.

However, some customers have complained that the handle broke very quickly and that the maker is very hard to clean if it overflows. Some also note that the non-stick surface is useless and that the lid won’t close even with the recommended amount of filling. 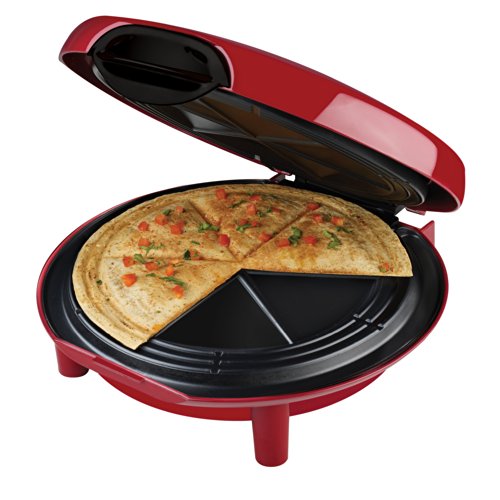 If you love quesadillas and you don’t want to make a mess at home, you might consider this red quesadilla maker offered by George Foreman. Users love that the maker cooks evenly, but some do note that the pockets are shallow.

The George Foreman maker measures 12” x 12.5” x 5”, and it features a weight of 2.5 pounds, a 10-inch cooking surface, nonstick grill plates, and six deep-dish pockets. It also has a slip-resistant grip, power on indicator, and ready on light indicator. You can have quesadillas in about five minutes, so it’s an excellent choice if you want a quick snack.

A reviewer states that the George Foreman quesadilla maker works wonderfully and that you can experiment with different quesadilla recipes. She adds that it cooks the quesadilla very quickly and that she highly recommends it. Another customer mentions that she uses it once a week and that the quesadillas are well-cooked and crispy.

A buyer says that the maker holds 10-inch tortillas with no issues and that it’s easy to wipe it clean with a clean cloth. She comments that the maker is small, compact and easy to store. However, some customers have complained that the latch is poorly designed and that it breaks very quickly. Some users also note that it won’t last for long and that they had issues cleaning it. 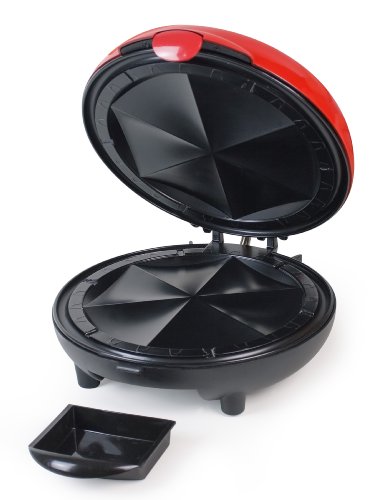 This electric quesadilla maker offered by Bunn is innovative, well-built, and convenient if you want something fast to eat.  Users love the light indicator, but some do note that it’s hard to clean it properly.

The Nostalgia quesadilla maker measures 11” x 10” x 4.5”, and it features a weight of 3.5 pounds, a non-stick cooking surface, a removable drip tray, two position latches for thick and thin quesadillas, a preheated light indicator. You can cook up to six wedges of quesadilla in three to seven minutes depending on the filling.

Some users also note that the maker malfunctioned quickly and that it’s easy to burn yourself. 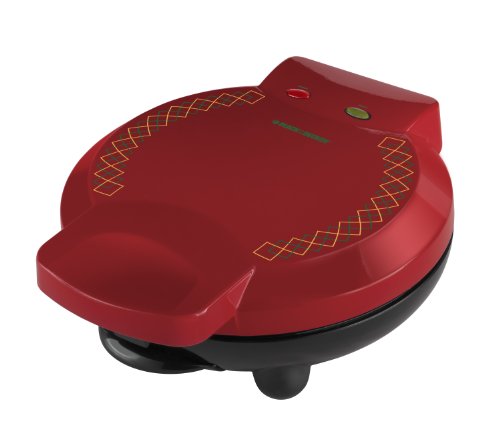 If you are a quesadilla fan and you want a fast quesadilla maker, you might take a look at this electric maker offered by Black & Decker.

Users love the price, but some do note that it’s not easy to clean it. The Black and Decker quesadilla maker measures 14” x 5” x 11”, and it features a weight of 4.7 pounds, an 8-inch nonstick plate, a non-stick coated cooking surface, six deep-dish pockets, press and seal lines, and a removable drip tray. The maker also has a power light indicator, non-slip grips, and you can store it vertically to save space.

A customer mentions that she regularly uses the Black& Decker electric maker and that she has made around 300-400 quesadillas with it. She adds that it heats quickly, cooks evenly and that it’s an easy job to clean it.

A reviewer also states that the electric quesadilla maker works smoothly and that it’s perfect for a late meal snack. However, some customers have complained that the pockets are too shallow and that you can’t put many ingredients in the tortillas. Some also note that they had issues with the power indicator. 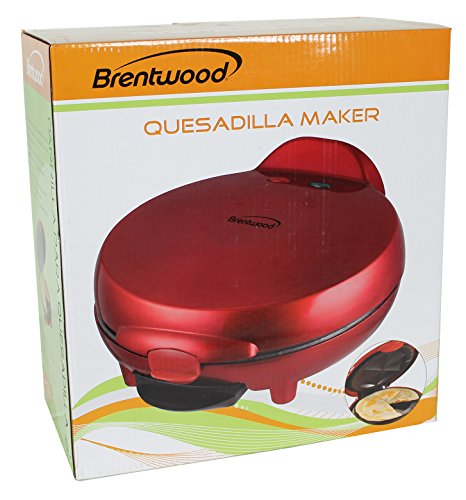 This red quesadilla maker offered by Brentwood is convenient, practical and useful if you like fast snacks. Users love the color and that the maker is easy to use, but some do note that it’s manufactured in China.

The Brentwood quesadilla maker measures 10.8” x 11.5” x 5.8”, and it features a weight of 4 pounds, 900-watt of cooking power, a large-diameter hot plate that can accommodate six tortillas, a built-up light indicator for power, and an indicator for ready status. The red electric maker also has a non-stick surface which makes it easy to clean and store.

A buyer comments that the Brentwood quesadilla maker arrived quickly and that there were no issues with the package. He says that it’s very simple to use it and that the quesadillas are evenly cooked and tasty.

Another reviewer shares that this is a great addition to any kitchen and that it’s very handy and well-made. She highly recommends it to anyone who loves quesadillas. A user also states that even people who are terrible at cooking can use the maker and that there are no messes to clean afterward.

However, some customers have complained that the quesadilla maker arrived dented and scratched and that it looked used. Some also note that there is an issue with the lid and the hinges.

The first quesadilla maker we took a look at is manufactured by Hamilton Beach- it is advertised as an easy solution to creating ready-to-eat quesadillas in around five minutes of cooking time. Hamilton Beach markets it as a convenient replacement for restaurant-quality Mexican food.

All you need to do is insert your tortilla, pile on some delicious ingredients like beans, cheese, meat, vegetables, and add another tortilla on top, tightly close and lock it's lid and in a couple moments time the Hamilton Beach quesadilla maker will produce delicious quesadillas that are cooked to an optimized degree.

In terms of design, the locking lid seals in the food, helping to produce a decent quality of Mexican (or roti, even) fare to feed your family on those nights when you don't have a lot of time but don't want to spend the money on an expensive take out solution.

The second option we took a look at was the George Foreman quesadilla maker-it features 10-inch plates that create six quesadilla pockets, all in under five minutes.

The third quesadilla maker we examined was the Nostalgia series option- it's advertised as generating six quesadillas in between 3 to 7 minutes on a non-sticking heated cooking surface.

The fourth option we examine was the Black & Decker quesadilla maker- it features 8-inch plates with the capacity to create six deep dish pockets. Black & Decker say that there are 8-inch plates cook evenly, ensuring that your Mexican food will be produced in under five minutes time, but enough space to cram it full of all of your favorite Mexican sides and fillings.

The last option we examine was the Brentwood quesadilla maker at- it provides 900 W of power with a hot plate that produces six tortillas at a time.