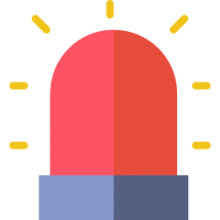 Most units are solar-powered, which means that the predator deterrent light will automatically charge itself, turning itself on during the nighttime and off during the daylight.

Our Top Pick: The Predator Guard

Another cool feature is random flashing patterns which keep nasty predators on their toes- because some animals will get used to a pattern and cease to be deterred by it.

Let's take a look at the best-selling predator deterrent lights on the market today and evaluate how they compare. 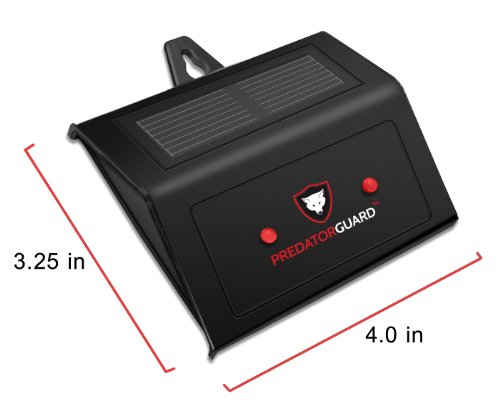 This lightweight predator deterrent is a solar-powered option that is automatic and maintenance-free right out of the box. It effectively mimics a pair of flashing eyes that nocturnal predators will assume is another animals.

This will make them feel unsafe and they will turn tail and run. It works up to a half-mile and is covered by a three-year warranty. It can be attached to any wood structure or surface with a single nail or screw, but you can also wire it to a post. As well, the back is magnetic- so that is another means of fixing it to a surface.

Users say that it will not scare away domestic pets, only nighttime animals that are entering into on known areas and are extra-sensitive to threats. Users advise situating it at approximately at the eye level height of the animals you are trying to deter. Predator Guard buyers are generally a happy lot.

One farmer with a significant collection of free range poultry, writes that he loves his predator guard because of its large solar panel which means that it charges in less time, an on off switch which enables him to store the unit and keep a solar-powered charge, its internal magnet for easy surface installations, the enlarged screw hole for slip-on hanging, and it's large and intimidating 'eyes'.

Another person who lives in a townhouse describes being plagued by raccoons right outside their bedroom window, keeping them awake all night. They bought the Predator Guard and found that right away the raccoons were scared off by the red blinking eyes of their machine.

WHAT ARE BUYERS SAYING?

Nite Guard users write that it is exceptional for scaring off weasels from killing poultry as well as deer that enjoy eating up landscaping.

Another user writes that it has the unintended effect of scaring off human threats, as well.

Any new guests, or even neighbors, usually comment on the predator control lights that they resemble an expensive security system- and comment that they wouldn't be trying to break into that person's house, for sure.

Another Nite Guard buyer describes how effective it was for protecting their chickens, which they have come to love as pets.

Since they live on land with deep woods that house all manner of predators from raccoons to coyotes and deer, their chicken coop is regularly visited by nighttime predators.

They were very pleased with the outcome- after installing the Nite Guard around their yard, they tested it in areas known to be infiltrated by nighttime raccoon predators and found that ever since installing it raccoons had stopped raiding their compost.

These property-owners advised to periodically move the device around to keep the animals on their toes- you don't want to have the predators get accustomed to it and learn to not be afraid of the flashing lights.

An urban resident who owns a very large Siberian Husky describes having his yard raided by all manner of nighttime predators, from skunks and raccoons to possums and bears.

His dog is a bit too brave, and since he spends the night time hours outdoors, he ends up doing battle with these potentially dangerous animals.

After installing the nightguard predator control light on his property, he reports that there have been no more incidents with invading animals harassing his pet. Yet another Nite Guard user describes installing this solar-powered predator light to decrease the loss of chickens and ducks on her property.

She recommends doing some due diligence prior to purchase to ensure that the specific predator deterrent light is equipped to deter the sorts of predators that you are being plagued with.

It's important to follow set up instructions to ensure that you will get the best effect as quickly as possible and, as other users have described, periodically adjusting the placement of your deterrent lights to keep animals on their toes.

How To Protect Your Backyard Chickens from Predators

Purchasing a solar-powered predator deterrent light can be a pretty smart decision if you're looking for a way to automatically deter nighttime predators from entering and harassing your property or poultry.

Generally made of rugged, weatherproof materials, most manufacturers promise that they will last 3 to 4 years.

As we have seen, there are even some unorthodox applications where urban users employ them to scare off annoying nighttime predators, as well we have seen that they can even unintentionally scare off humans who mistakenly believe that these deterrent lights are high-end home security systems.

Read reviews on this page, check out comparison table, and make sure you read up on the product prior to purchase to ensure that it will be effective for you and your property needs.