The 5 Best Phones For The Elderly [Ranked]

Communication is essential, especially for the elderly who rely on important family relationships in their advanced age (Source).

With aging comes impaired vision, hearing and sometimes cognitive ability, so it is important that a phone is equipped to meet the vision and hearing needs of senior citizens.

Telephones that are designed for senior citizens suffering from impaired vision typically feature large, high contrast buttons that are easy to press. They will typically illuminate and include display screens that are adjustable as well as displaying caller ID information in an easy to read way.

Telephones for the elderly who are suffering from hearing impairments often include sound adjustments that enable senior citizens to be better able to hear their calls. In addition, many phones include flashing lights that go off whenever there is an incoming call.

These phones can typically have an adjustable volume decibel range, and are designed to be adjusted significantly louder than a regular phone. Many phones for the elderly have emergency buttons that are directly available from the interface.

The Clarity Amplified phone is our top pick. It features 9 one-touch speed dial buttons. You can optionally add pictures to these dials, as well.

The number buttons are really big and high-contrast. You can easily adjust the volume with the phone's integrated slider- you can make the ringer really loud, plus there are flashing LED lights for the hearing-impaired.

On the downside, it doesn't have an incoming caller-ID LED display, or an LED display verifying the dialed number for outgoing calls. Also- there's no speakerphone.

Let's take a look at our 5 of the best-selling phones for the elderly and visually impaired.

The 5 Best Phones for the Elderly 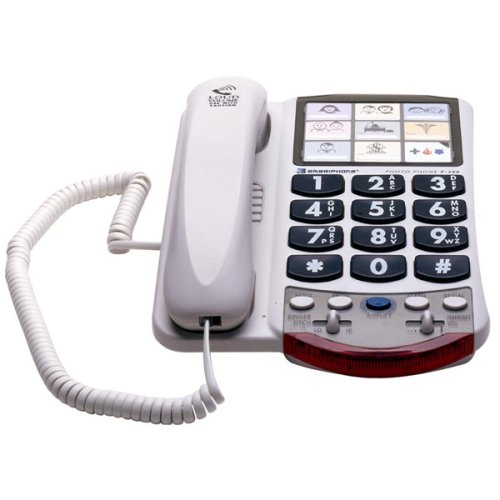 This ergonomic and user-friendly phone can be a useful addition to the home of an elderly user. It allows for nine programmable photo memory buttons so senior citizens will not have to refer to scraps of paper or memorize important numbers.

The dial pads are also large enough for easy dialing. In the case of users with a hearing problem, the volume control can be amplified up to 18 decibels.

The ringer can also be adjusted up to 75 decibels and it is hearing aid compatible. The ring indicator emits bright visuals that are noticeable from a distance. This phone also has flash, hold, program and redial functions. 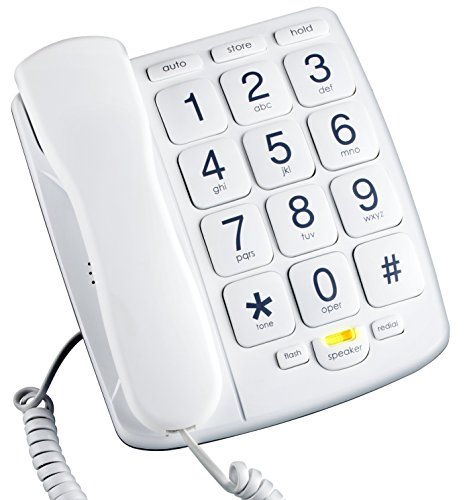 One of this clock’s prominent features is that it functions even when there is a power outage.

It also comes with large built-in buttons for more visibility and easy dialing. For easy access, it is designed to be wall-mountable with minimal installation. Other important functions of this phone include: hold, store, auto, redial, store and flash. It can also be set to be on hands-free speakerphone mode.

Moreover, it also has a 10-number speed dial function and adjustable ringer volume control. For the elderly and its sight-impaired users, this can be an excellent tool.

3. The CareLine Phone with Answering System and Accessory Portable Pendant

When you buy this corded phone it arrives with one cordless handset and a portable safety pendant.

The phone has a large display, huge buttons as well as a full-duplex speakerphone. It is demonstrably intuitive for the elderly. With the safety pendant, the elderly are just one speed-dial button away from making emergency calls even when they are away from the phone in the home. Also, both of these devices have a built-in caller ID that announces the name of callers through the speakerphones.

With this phone, you will not have to pay for installation or monthly monitoring costs.

4. The Emporia Essence Plus Cellular Phone

This big-buttoned cellular phone is another quality option for seniors. Among its notable features are the emergency button at its back, large color display, LED torch, FM radio and a flashlight.

It places voice calls and sends and receives SMS with legible text. It also reads out loud numbers, the time, and functions.

The Future-Call picture phone is another user-friendly phone for the elderly. Important contacts can be saved with their pictures on each of the 10 buttons.

One of its many important features is its ringer switch which can be set to high, low, or off. It also radiates bright LED lights when there are incoming calls. In case of emergency, the user can automatically press the 911 red emergency key even if the unit is not plugged in from the line.

Depending on what’s convenient, it can be mounted on a desk or on the wall.

What do users say about these phones for the elderly?