The 5 Best Over The Sink Cutting Boards [Ranked] 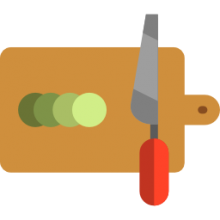 They often include integrated colanders for draining cans of kidney beans or storing peeled potatoes to give them a rinse before chucking them in the slow cooker (Source).

Unfortunately many of these kitchen tools are junk- they bend and warp after only minimal use.

The best option we've seen is the Good Cooking Over the Sink Cutting Board- it features a removable, steel-rimmed colander with a maximum cutting width of 26.75"

Our Top Pick: The Good Cooking Cutting Board 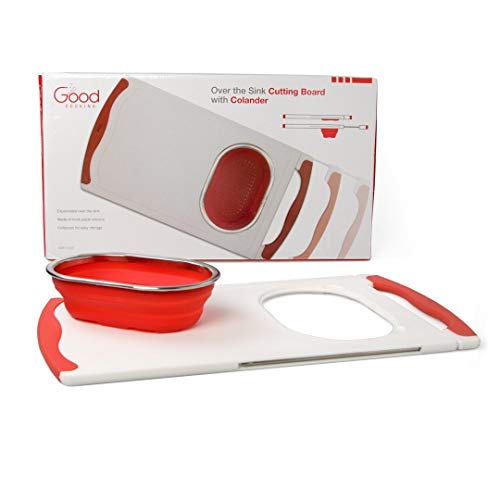 The Good Cooking over-the-sink cutting board has received solid feedback from its buyers. It measures 26.75" when fully extended and the colander measures 4.5" x 7". Fully retracted, it measures 19.25" x 10.5".

They tell us that it provides extra counter-space, which is great for cramped apartment kitchens. The included colander provides a convenient area to transfer peeled vegetables and fruit for a final wash-down.

While the colander isn't huge, the cutting board provides a significant amount of surface area. Its extending arms provide a stable cutting surface, holding it across a kitchen sink securely.

It's also dishwasher-safe. If you're looking for an extending wood cutting board, check out the Grande Epicure or the Catskill Craftsmen options below. Quick side note- check out stovetop covers if you want to gain extra kitchen surface area!.

1. The Good Cooking Over The Sink Cutting Board Review 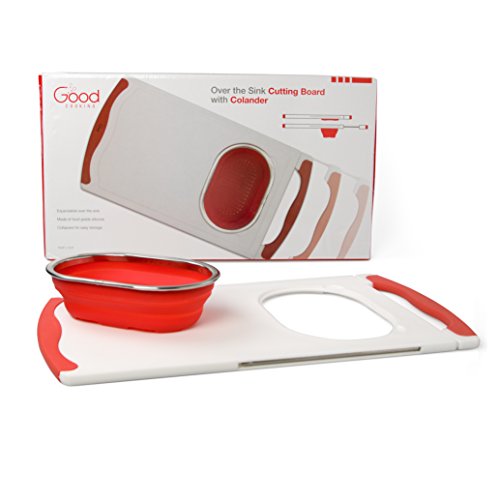 This over-the-sink cutting board offered by Good Cooking is handy, sturdy, and a convenient tool for every housewife. Users love the extra long size that fits most kitchen sinks, but some do note that the colander is smaller than they anticipated.

The Good Cooking sink cutting board measures 19.7” x 11” x 1”, and it features a weight of 3 pounds and a removable silicone colander with a stainless steel rim. This sink board is made of food grade silicone and polypropylene, and it’s 100 % BPA free. Another great feature of the board is that it’s dishwasher safe and the colander collapses for easy storage.

A buyer comments that this adjustable over-the-sink board is a necessity for anyone with limited counter space and that since she has it, it’s easier than ever to cut vegetables and dispose of the trash.

Another reviewer mentions that the cutting board fits her large sink with no issues and that it doesn’t slip or slide. She adds that the small collapsible colander is perfect for trash disposal or rinsing small fruits such as strawberries.

A user also observes that the expandable arms hold the board stable even if you use it on old ceramic sinks and that the colander basket is easy to clean. However, some unsatisfied customers have said that over-the-sink board is hard to store because the strainer falls.

2. The Progressive Over The Sink Cutting Board Review 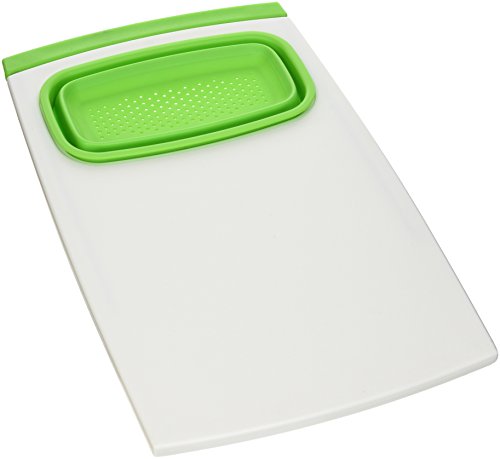 This sink cutting board offered by Progressive is practical, well-designed, and suitable for most sinks. Users love the design and the price, but some do note that the strainer tends to fall.

The Progressive over-the-sink cutting board measures 16.5” x 9.9” x 1.5”, and it’s made of polypropylene, so it’s completely non-toxic. This cutting board also features an extendable handle that lengthens the board up to 24 inches, a collapsible, removable colander which is great because you can store it easily, and a weight of 2.5 pounds.

Overall, this is an excellent choice for a durable cutting board, and you can toss in the countertop dishwasher to clean it.

In general, users have a favorable opinion of the Progressive sink cutting board, and they praise its sturdiness and usefulness. A buyer comments that she loves using the cutting board and that it turned out to be sturdier than she expected. However, she notes that the colander falls, if you store the board vertically.

Another reviewer mentions that the sink board provides plenty of space for cutting and chopping and that the collapsible colander is multifunction. A user also observes that the handles fit his double utility sink with no problems and that the board doesn’t slip. He highly recommends it as the best over-the-sink cutting board.

However, some customers have said that the cutting board moves around the sink and that it’s easy to lose the non-skid rubber feet that are supposed to keep the board stable. A user also complains that the material started to bend after a couple of months.

3. The Catskill Craftsmen Extending Wood Over The Sink Cutting Board Review 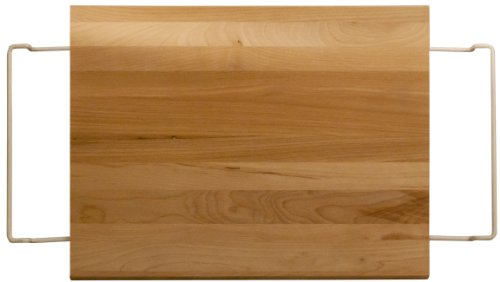 If you have a small kitchen counter and you’re in need of extra space, you might take a look at this wood sink cutting board offered by Catskill Craftsmen.

Users love that the board is made from non-endangered, self-replenishing tree, but some do note that the wood needs sanding. The Catskill Craftsmen board measures 14” x 11” x ¾” when it’s not extended, and 22.5” x 11” x ¾” when extended. It features plastic-covered, pull-out suspension wires, which is great because you can adjust it to fit most sinks, and it weighs only 3 pounds.

A reviewer shares that she has been using the wood sink cutting board for several years and that there are no cracks or stains present. She adds that the hooks keep it steady and stable, and she highly recommends it as one of the best over-the-sink cutting boards.

Another customer mentions that the over-the-sink board fits her old double sink with no issues and that there is plenty of cutting space available. She advises that you oil the board from time to time to keep in good condition.

A user also observes that the sink board is very well-made and that it’s easy to keep it clean. However, some unhappy customers have said that the wood over-the-sink board cracks quickly and that the adjustable handles slide. 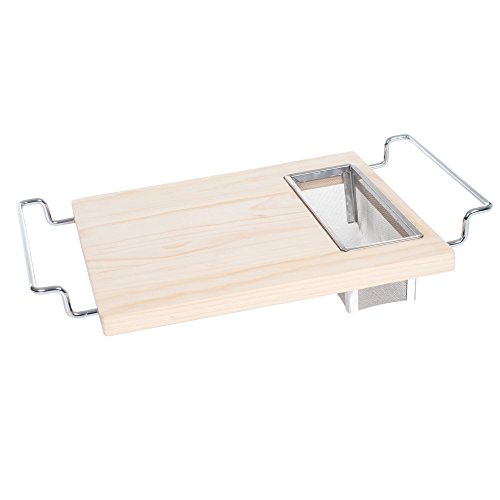 This over-the-sink board offered by Chef Buddy is easy to wash, adjustable, and suitable for anyone with limited space in his kitchen.

Users love that the board provides 185 square inches of cutting area, but some do note that the quality is questionable. The Chef Buddy sink board measures that 11.1” x 3.5” x 17.8”, and it’s made of hardwood which is great because it’s free of any toxic material. Another great thing about this over-the-sink board is that it has slide-out side handles to fit any sink, a removable strainer, and a weight of 3.2 pounds.

As a whole, users have a negative opinion regarding the Chef Buddy over-the-sink cutting board, and they agree that the design and the construction need to be improved.

A buyer says that the wood board broke after a few months and that the wood is of very cheap quality. Another unhappy user mentions that the board started to swell after a couple of days and that it gets stained easily. He doesn’t recommend it if you’re looking for a long-lasting cutting board.

A user also observes that the surface of the board is rough and that it didn’t last even one day. On the other hand, a satisfied user says that the wood cutting board with a colander is easy to use and that she hasn’t had any issues. The reviewer adds that it fits over his sinks like a glove. She advises that you oil the board with bamboo or mink oil several times to keep it from splitting or cracking. 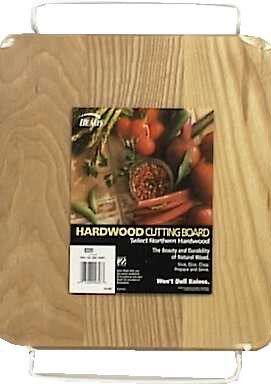 This over-the-sink cutting board offered by Grande Epicure is handy, light, and an excellent choice if you want some extra space. Users love the long size, but some do note that the handles slide.

The Grande Epicure sink board measures 11” x 12” x ¾”, and it’s made from premium wood which is hand finished to ensure quality. The wood board also features extendable, pull-out handles, which is great because you can fit it over almost any sink. It’s recommended that you lightly wash it and dry it thoroughly after each use.

In general, users have a mixed opinion regarding the Grande Epicure over-the-sink cutting board. A happy reviewer mentions that the wood board doesn’t slip or move and that he is very pleased with its functionality and design.

He adds that it’s very easy to clean it and that he recommends it to anyone with limited kitchen space. Another user shares that there is plenty of space on the board to chop various ingredients and that there is no more mess in his kitchen.

On the other hand, an unhappy buyer says that the wood board got warped only after a month and that it tends to fall in the sink due to the small metal handles. A user also states that the cutting board fits loosely and that he is disappointed by the quality of the wood.

Below we've assembled some buyer feedback for each option. If you're at a loss for the sort of foods you can chop up on one of these products, check out this detailed list of vegetables for some inspiration.

The first over the sink cutting board we examined is the Good Cooking option. It includes an integrated colander that is collapsible and is able to extend and adapt to different-sized kitchen sinks.

It's built from a food-grade silicon and polypropylene and is designed to save you invaluable kitchen real estate by providing you greater counter space to prepare meat and vegetables as you cook. Small kitchen cooks tell us that at its maximum extension it measures 26.75" long.

The second over the sink cutting board we examined is manufactured by Progressive- it is an expanding cutting board that also includes a collapsible colander.

It extends to 24 inches, is dishwasher safe and is marketed as a quirky kitchen tool intended to increase the amount of space you have in your kitchen to prepare meals or chop up fruit for summer smoothies.

The cutting surface itself is around 10" x 10" with one amateur chef saying that it is large and strong enough to handle cutting up a watermelon on.

The third adjustable over the sink cutting board we examined is manufactured by Catskill Craftsmen- it's made of wood with adjustable suspension wires that when fully extended measure 22.5" x 11.75".

It's marketed as a handy kitchen tool for cooks and chefs suffering from limited counter space, providing an extra area for messy cutting and chopping jobs. It's a butcher block style extendable cutting board with the hardwood strips glued together into a serviceable and sturdy kitchen aid.

The fourth sink cutting board to be examined was the 13-inch Chef Buddy option- it's built from hardwood and includes an integrated strainer for washing produce. Unfortunately, many reviewers were disappointed with the quality of this item, complaining that it broke after only several uses, warping and cracking.

The last gourmets sink board we looked at was manufactured by Grande Epicure- it has extendable handles and measures 11" x 12" x .75". It's marketed as an American-made option that's a handcrafted and design to save and consolidate counter space by providing a roomy cutting surface for prep work.