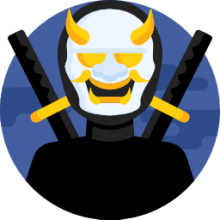 In this post, we examine the Oni mask- investigating the origins of this terrifying style.

We sourced some affordable purchase options if you want to dress up like one of these supernatural ogres.

Plus, there’s a DIY option further down the page if you want to make your own.

Oni (鬼) are a kind of yōkai, a Japanese supernatural demon, devil, ogre, or troll renown in Japanese folklore (Source).

Indeed, the Japanese are known all over the world as people who preserve their culture and beliefs. Both men and women have beliefs they stand for.

One thing they are known for are these ancient, supernatural masks.

They were of great importance and passed on from one generation to the other. They were used to perform rituals and plays.

Tourists from all over the world travel to this country to enjoy a first-hand experience.

These masks were used to depict different creatures and characters including ghosts, common people, deities, devils, heroes and animals.

This article will take a deep look at one of the most popular masks enfaced by the Japanese. 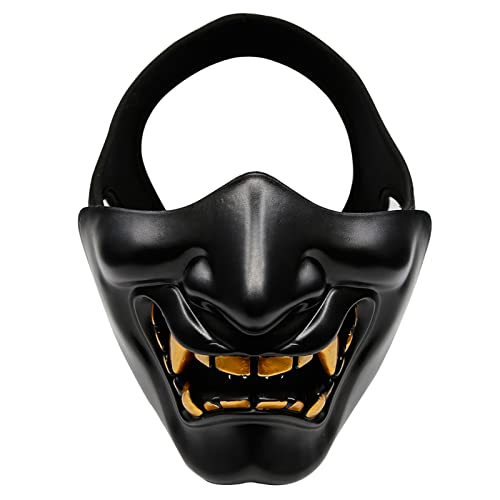 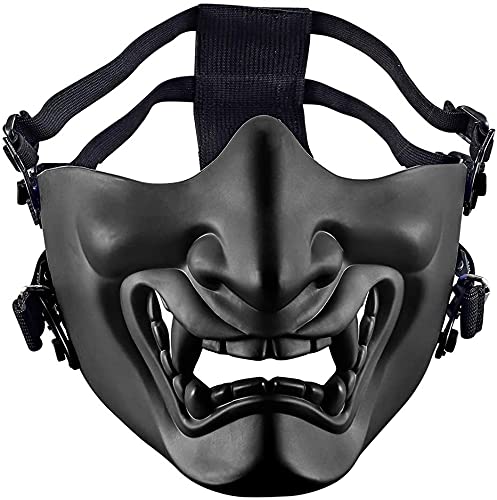 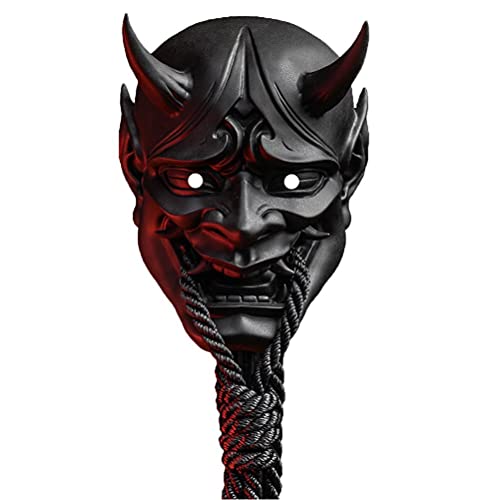 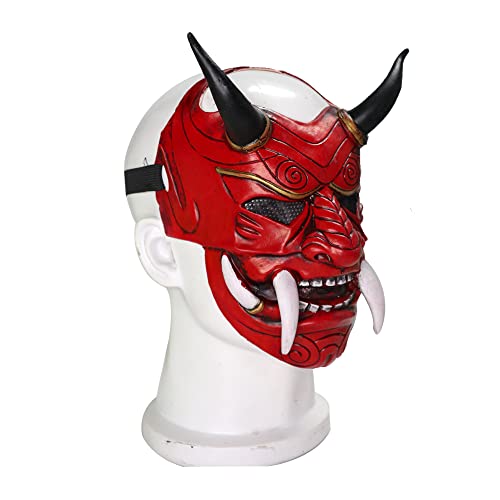 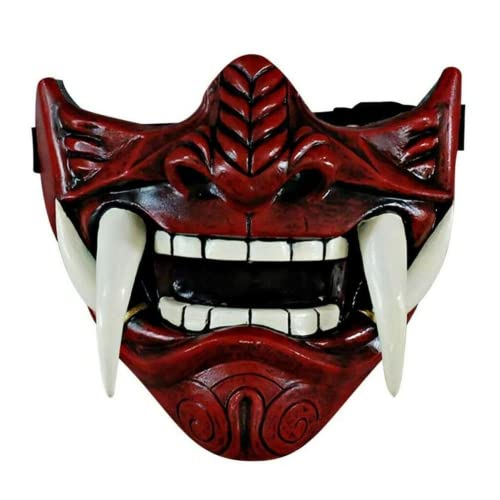 The Mythology & Fiction Explained YouTube channel provides a comprehensive overview of the Oni:

The YouTuber explains that in this video he’s diving into Japanese folklore and taking a look at one of the most iconic figures: the Oni. Roughly translated Oni means ogre or demon, and they have got a large overbearing figure much taller than any man.

The look of the Oni is something that does vary. They’re most often found with red or blue skin, with two horns and fang-like tusks. The look of them is not too different from that of an ogre.

The amount of horns, eyes, and fingers along with skin color, is one thing that will regularly change depending on the story.

Their clothing, as you would expect, from a giant ogre-like creature, is quite primitive, they only wear in the pelts and hides of beasts. They have immense strength and the Oni are extremely dangerous demons.

Wherever they go disease and disaster spreads and follows. They were originally once human, but they’re born when a truly evil human dies. They’re then sent to one of the numerous Buddhist Hills where they ultimately get transformed into an Oni.

They would destroy and crush any individual that crossed that path just for fun.

They only were in charge of punishing people who were considered evil enough to be reborn into a demon much like themselves. Their techniques of torture included crushing bones and peeling off the skin of their victims. 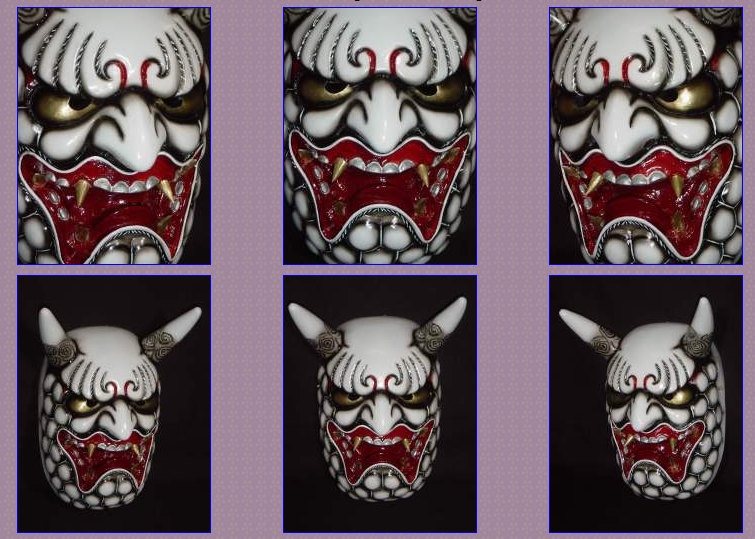 They were the foot soldiers of choice for the great generals of the underworld, and there have been instances where a human soul is so evil and beyond any kind of redemption.

The same could be said in early Japanese folklore before spirits had been independently categorized only referred to any supernatural being, as spirits became more defined.

The definition for Oni became much more narrow, making reference to a particular kind of ogre-like demon. 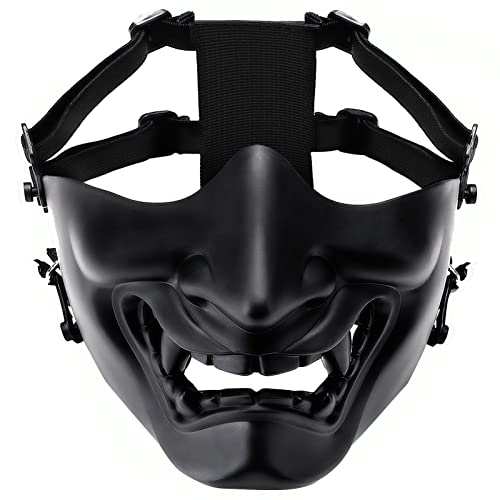 One of the main features of an oni mask is that it has to be a gigantic ogre-like creature. Normally, the depictions of these masks vary but a scary look is standard.

The most common creature portrayed by this mask is a hideous single-horned or multiple-horned ogre. They also have wild hair and sharp claws that really look scary. That is the whole idea behind these masks.

This is also another feature that makes these masks scary. If the ogre is wearing tiger-skin then the better.

Iron clubs are also a common phenomenon and your mask should not miss this. So with this look, what you will have is an oni that looks like it cannot be defeated or an invincible creature.

The color of the skin

The color of the skin is something else to consider when looking for an Oni. Their skin comes in different colors but the most common one is blue, green and red. There are also those that are depicted as yellow-skinned or black-skinned.

What makes this whole mask look outstanding and unique is the fact that most of them have an extra finger and toes or a third eye on the forehead. So the scarier the mask is the better.

DIY: How To Make An Oni Mask

eHow also has a good guide on this.

What is an Oni mask? 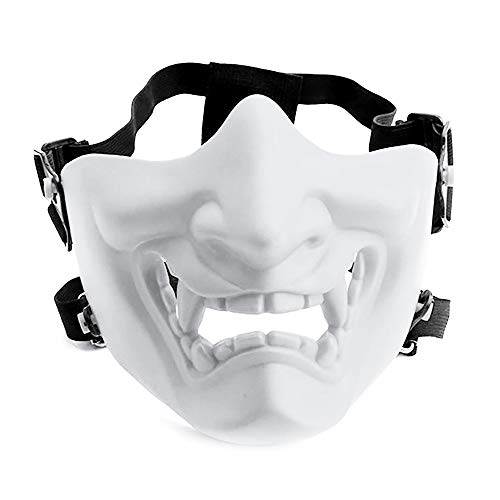 Oni can be described as a type of yokai. The mask is based on a Japanese folklore as is seen as an evil being that works in the spirit world. They are normally depicted as devils, trolls, ogres or demons. If you are an arts person then you understand that these are the most famous pieces of art from Japan.

Oni creatures are generally humanoids but posses features different from what you see when looking into the mirror.

A quick look into the books of history and you will see that Oni comes from the word “on.” They can also be described by the locals as spirits or gods that cannot be seen with the naked eye of humans. They are also considered a bad omen since they are the main cause of disaster, disease and all the bad things and events that happen.

The locals also believe that the Oni takes different forms to deceive and gobble the common person. This is why they are also described as “ghosts” or in a local dialect “gui.” This is because they are formless beings and you will need to be strong to be close to one. But if they are scary as we have described them, why do people cherish them?

Tourists from all over the world flock to Japan during the Setsubun festival according to TripSavvy.

This is a bean throwing festival which holds the main aim of driving away oni. This is quite an interesting festival where locals and tourists alike throw roasted soybeans out of their homes or indoors. They do this shouting “Oni go out! blessings come in according to SavvyTokyo. But there is more that happens during this particular festival.

Ever heard of Tottori Prefecture? You probably haven’t but this is a season linked to oni masks. It is during this season that a charm made of dried sardine heads and holy leaves is used to guard the people against the spirits of Oni.

As mentioned above, oni masks are popularly used by actors and visitors or locals who never miss out on a summer festival. This is why different vendors sell these masks. These masks are also appreciated by people who celebrate Halloween. But did you know that there were different masks in the market?

What determines the style of the mask is the character. Daikijin is one of the most popular oni characters. This is normally a white mask with two horns on the temple. It also has a huge nose and golden eyes.

They also come in different variations according to this Japanese mask site but what is distinct is the huge open mouth that reveals two golden fangs. Unlike the common oni masks that people attach the evil things to, this one is used during a festival or a ceremony to chase away the evil spirits.

There is also the Namahage mask for people who don’t want a hairy mask. People normally celebrate the Namahage festival on the 15th of January. This mask is normally worn by young people during the festival. This is more of a festival that inspires the children to help their parents and study hard.

It is a bright red mask and has long black hair. What stands out are the sharp teeth and fangs that stick out.

Lastly, you will notice a huge difference with a Syoki mask; one of the variations of an Oni mask. This has a bright red face and with two enormous black horns. What makes it stand out are the golden eyes and cloud-shaped eyebrows. The fangs stick out while the teeth are golden.

Now you understand what an oni mask is and why it is so popular in Japanese culture. People from all over the world have come to love this rich culture. So the next time you see an oni mask, just know there is a rich history behind it.

As always, Wikipedia has an amazing list- this time of Japanese folklore characters. Check it out by visiting the reference page.

The Noh Mask website also lists out a bunch of different mask styles: