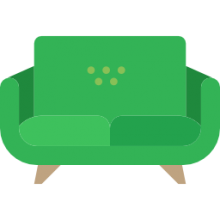 In this post, we took a look at five of the best-selling lay bags, also known as pouch couches and inflatable loungers.

These lay bags are inflatable chairs/couches that you can use when you’re out camping, or if you’re at the beach or pool. It’s ideal any time you need a portable and comfortable place to rest.

How does it work

These bags are inflated by “scooping” air into them (Source).

However, if you’re looking for something to use at the beach or pool, you might want one that has drink holders built in (Source).

Below we take a deep dive comparing these five portable loungers: 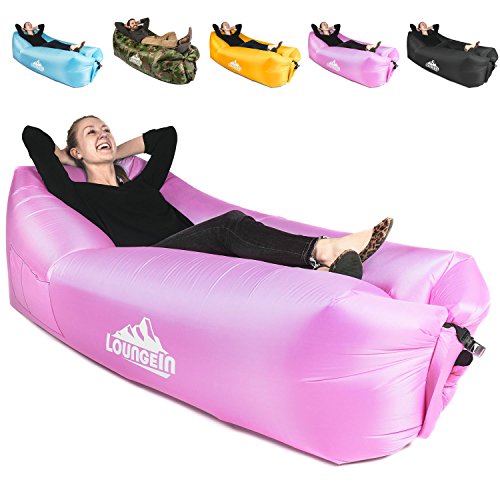 This inflatable air couch offered by LoungerIN is comfortable, well-made, and an excellent choice for a trip to the beach or the park.

Users love the price and the three color options, but some do note that it’s harder to inflate than they expected. The LoungeIN bag features multiple storage compartments, multiple layer support technology for durability and portability, and water-resistant construction, which floats on water.

Another great thing about this product is that it has a lifetime warranty and 100% money back guarantee. What’s more, the air couch comes with a securing stake and a carry bag for convenience, in addition to a bottle opener for optimum comfort.

As a whole, users are satisfied with the performance, durability, and design of LongeIN inflatable lounger. A reviewer comments that he likes the tent-like canvas exterior and that filling it up isn’t difficult, but requires effort. He adds that the inflatable couch is sturdy and that it doesn’t deflate quickly. Another purchaser mentions that the lay bag is puffy and comfortable and that it can withstand heavy weight without collapsing.

He highly recommends it as one of the best inflatable loungers available. A buyer also states that the product is big enough for three kids to sit on it and that it’s perfect for camping. However, a few customers have complained that the lay bag doesn’t stay inflated for more than a couple of hours or that it deflates in 10-20 minutes.

This sofa lounger offered by Great Home is convenient, easy to move around, and available in four colors.

Users love the lightness of the bed, but some do note that the quality is not what they expected. The Great Home lay bag features an improved sealing mechanism with reinforced seams for holding air for at least 5-10 hours, an easy-to-inflate design, and a lifetime warranty. Another great thing about this product is that it’s made of an odorless material, strong enough to support up to 500 lbs. What’s more, you can use this blow-up couch is waterproof so that you can lounge in the pool comfortably.

In general, users have a mixed opinion regarding this inflatable air lounger, and they agree that it needs improvement. An unhappy buyer comments that the material is of poor quality and that it’s impossible to inflate it. He also adds that it’s not long enough and that it’s not comfortable. Another reviewer states that the bed doesn’t stay inflated for more than 20 minutes and that it’s a huge disappointment.

On the other hand, a happy customer observes that the lounger is easy to inflate and that the instructions are clear. He also shares that the blow-up couch is perfect for the beach and that it’s very comfortable. The user recommends it to anyone looking for an affordable lay bag. 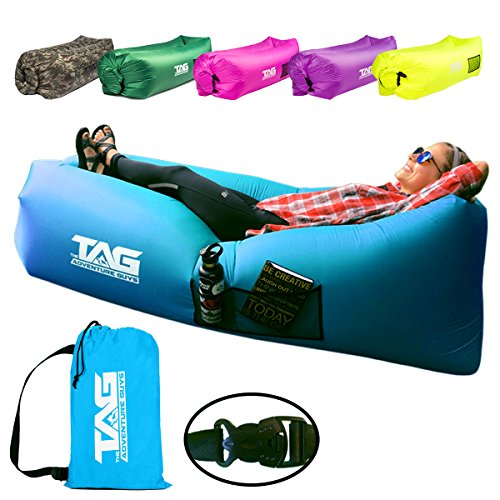 If you’re wondering how to lay comfortably on the beach, you can try this inflatable air sofa offered by The Adventure Guys.

Users love the price and the lifetime warranty, but some do note that it doesn’t hold air as well as they expected. The Adventure Guys portable lay bag is made of 210T polyester ripstop fabric, which is durable, odorless, and comfortable, and it features two separate air chambers, a locking buckle, and an oversized design to avoid leaking. Another excellent thing about this product is that it’s waterproofed with a pillow headrest and three pockets for storing accessories. Its weight capacity is 500 lbs, and it’s available in six colors.

A reviewer comments that he was surprised by the quality and performance of the lounger air sofa and that it arrived in perfect condition. He adds that the instructions to inflate/deflate the bed are clear and that the technical support is helpful. Another happy user mentions that the lay bag is far more comfortable than it looks and that he highly recommends it.

On the other hand, an unhappy customer states that he ordered three lay bags and that one worked wonderfully, but the other ones were defective. He adds that the blue air sofa is made of thin material and that it deflates in 10 minutes. Another unsatisfied reviewer shares that it’s almost impossible to inflate the TAG loungers and that securing stake is missing. 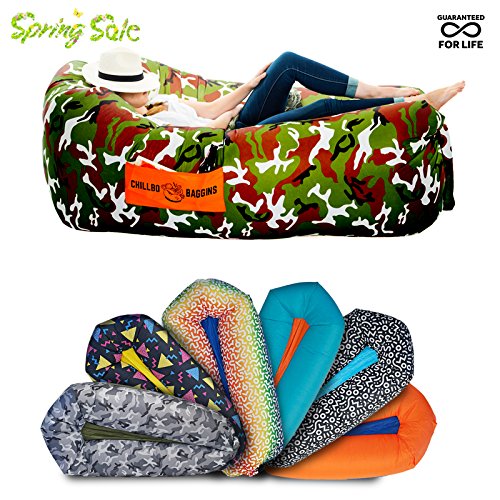 If you’re searching for a well-made inflatable air sofa to spend a day on the beach, you might consider this blow-up couch offered by Chillbo Baggins. Users love the 12 color combos, inspired by pop-culture and art, but some do note that it doesn’t inflate as quickly as they expected.

The Chillbo Baggins lay bag features elastic anchor loops to stake the lounger in the wind, pockets for snacks or book, and a carry bag with a shoulder strap to make transportation easy. Another great thing about this product is that you don’t need a pump to inflate it, and you can set it up in minutes. What’s more, you have a 100% money-back guarantee.

A buyer comments that he inflated the Chillbo airbed in less than five minutes and that he is very impressed by its design and durability. He adds that you can always rely on customer service if you run into a problem with this blow-up couch. Another user mentions that the lounger is light and compact when folded and that it doesn’t get hot under the sun. He highly recommends it as one of the best lay bags for relaxing on the beach.

A purchaser also states that the Chillbo inflatable sofa is slightly noisy, but comfortable and that it’s easy to fall asleep in it. However, a couple of customers have complained that it deflates quickly and that nails can pierce the material. 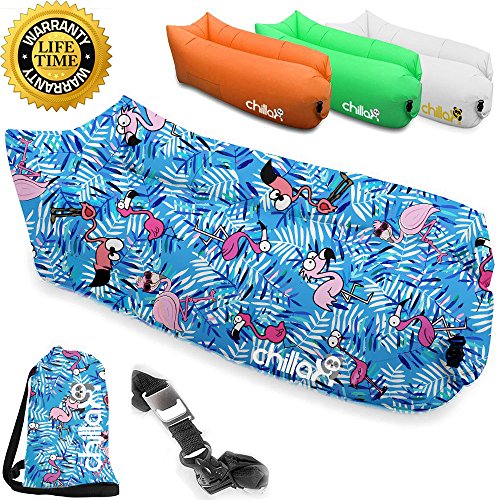 This inflatable air sofa offered by ChillaX is convenient, compact, lightweight, and an excellent choice for camping, traveling, or hiking.

Users love the nylon carry bag, but some do note that it’s more difficult to inflate than they expected. The Chillax lay bag is made of a multi-layered material, which is thick, easy to clean, and waterproofed, and it features an innovative design, a headrest, three stitched pockets for a bottle, a phone, and a book, a bottle opener, an anchor loop, and a securing stake. Another great thing about this product is that you don’t require a pump to reach full inflation in one minute.

What’s more, you have eight color options at your disposal.

A buyer shares that the Chillax lounger is perfect for the beach and that he has never had issues with it. He adds that it’s easy to set it up as long as you have sufficient wind and that customer support is exceptional. Another user mentions that he ordered two lay bags and that they arrived promptly in excellent condition. He says that they are comfortable and durable and that he highly recommends them.

A purchaser also comments that she hasn’t noticed any sufficient air loss and that you can sleep comfortably in it during the night. However, a few customers have complained that the product doesn’t hold air well and that it deflates in a couple of hours. Some also point out that it’s impossible to inflate the lounger with a fan or a leaf blower.

How To Inflate One

You've probably found this section of the post since you've been searching and looking to work out how to set up your inflatable lounger.

They say that it's completely understandable- these are a fascinating product and when they first got theirs, they were having troubles getting it set up as well. So they are here to guide you along in the process and make it easy for you as possible.

They say to get started- when you first get your sofa, It is probably going to look like a deflated pile of fabric.

You already know it is going to come out of the bag all wadded up- it will likely be folded up tightly. A good thing to do is take it out of the travel case as soon as you get it. If you wish to use it right away- lay it out flat, so that it has time to air out.

To kind of unkink it internally lay it out for a couple of hours. If you've got the time a couple of minutes works too- but the more you can lay it out, though, the better.

They've already had this one in the video laid out for a long time. Therefore it is ready to roll- it will likely be a lot more pliable and it's likely to inflate a lot more easily. Which means you don't have to be outside to do this. You can be indoors as well and also you don't necessarily need wind to do it then.

Wind will certainly help you out, but it's not essential. So what you are going to do is- there are 2 large openings on this inflatable sofa.

Both of them go to the same pocket. It really is one large tube which is twisted around by 180 degrees on here, and they also both go into the same basic opening, but you want to inflate them individually.

Now go to the other side and do the same thing again and close it quickly. Now that you have gotten air trapped inside of the inflatable hammock you are going to roll it up until it is tight. Once you have gotten this rolled up and tight fold this over, clip it and you are ready to go. It is super easy.

It's just a little difficult to learn and hard to set up initially but now you're ready to rock and roll. As you have seen that took like two seconds and They are ready to start chilling out.