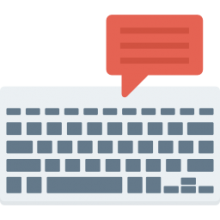 Large-print keyboards are designed with extra-large, high-color-contrast typeface on the key-caps. This helps users who suffer from vision impairments (glaucoma, nearsightedness, etc.) see the keyboard lettering as they type (Source).

Some people purchase them because they prefer to work in dimly lit areas, so a high-contrast keyboard with extra-large lettering provides enhanced visibility. Or just to make learning how to type easier (Source).

The Nuklz large-print keyboard is our highest rated option we've seen. Its lettering doesn't wear off the way other high-visibility keyboards do. It has a white/black high-contrast color scheme- a solid pick-up for vision-impaired and disabled individuals.

The Azio keyboard is unique for its large-print, back-lit keyboards- in either 3-color or 5-color options. This colored back-lighting can be adjusted or turned off completely- but some buyers did endorse the enhanced visibility of the illuminated keycaps.

One buyer said that they purchased it for a visually impaired mother who was having tremendous difficulty using her computer.

This type of color contrast makes it easier for elderly and visually impaired individuals to see the letters (Source).

This large print option offered by Nuklz is an effective option for someone with visual impairments or those who are learning to type. Its users love that the keys click nicely and that the keyboard feels sturdy, but some do have complaints regarding the lack of certain special feature buttons.

This product is a wired large print keyboard which is great because it can be used by everyone with poor vision. Another good thing is that it requires no special software and it’s compatible with Windows 98 and higher as well as Mac OS. This large print option seems like a good choice if you are looking for a standard size keyboard with good contrast of big black letters on a white background.

The general user consensus concerning the Nuklz large print keyboard is that it’s a great help for people with poor sight. Buyers are in general satisfied with the quality of the item and how easy it is to see the letters even without much light. They are also happy because it doesn’t require any installation. One happy purchaser shares that they’ve been contacted by the distributor with the offer to replace the keyboard that had loose keys.

However, one buyer comments about the differences between a Mac keyboard and this large print keyboard (ctrl-alt keys in the bottom row on the left side). Another dissatisfied purchaser complains about the lack of volume control buttons, DVD/CD control buttons and eject button. 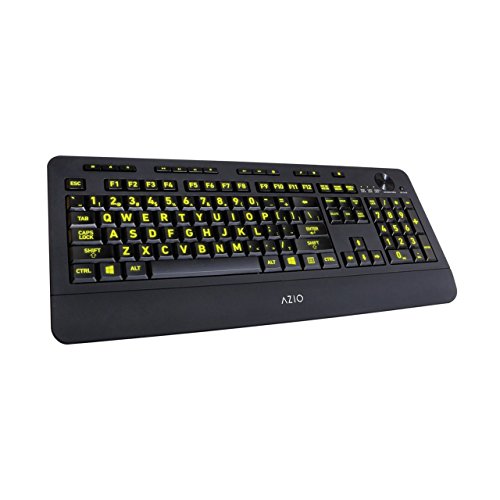 If you are looking for a top-rated large print option, you might want to consider this backlit keyboard offered by Azio. Its users love 5-color added touch to this large print keyboard, but some do complain about the keys sticking out and their height.

This product is a large print USB wired option that enhances visibility and typing accuracy. It features five backlight colors (red, pink, blue, cyan and chartreuse) which is great because it further promotes visibility. The brightness is easily adjustable by simply turning the corresponding wheel.

Another good feature is Internet and multimedia hot keys. This interchangeable backlight keyboard might be a good choice if you are looking for a large print keyboard that provides a personal choice of letter color.

In general, users love huge letters of this multi-colored Azio. One buyer states that the backlighting, in any of the colors, is great. Another satisfied purchaser mentions that the letters are quite bright without being annoying.

However, one buyer complains about the design which causes the keys to stick if they’re not pressed exactly in the center. Another reviewer advises considering another keyboard if you prefer a standard full-sized keyboard versus a laptop one. He states that the keys are about 1/2 the height of keys on a regular style option.

This large print computer keyboard offered by Allstar Marketing Group is a good option if you need improved readability of keys with less eye strain. Users like the big letters on standard size keys of this USB-wired keyboard, but do complain about the letters wearing off almost instantly.

This product is a wired large print keyboard with big black letters on a yellow surface which causes less eye strain when typing. It has 4-times larger letters and higher contrast colors. Another good thing is that it requires no software or setup and is PC and Mac compatible. This USB-wired large print keyboard seems like a solid choice if you are looking for an inexpensive large letter keyboard.

In general, buyers are satisfied with the EZ Eyes LG Keyboard and they praise its easy-to-read and soft keys. They like that it is lightweight but sturdy.

However, many buyers complain that the letters rub off quickly. One dissatisfied reviewer says that the keys are loose, sometimes non-responsive and occasionally jam. Another purchaser complains about the keyboard sliding with every stroke. 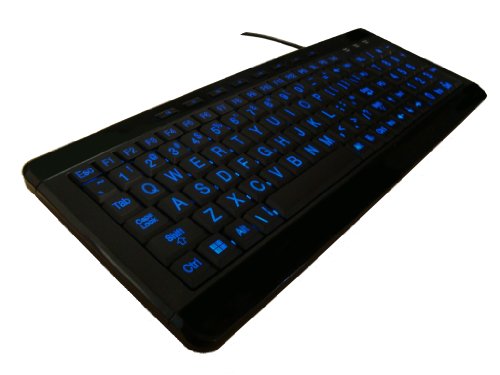 This backlit keyboard offered by iMBAPrice is a good option for those who need a large print keyboard to use during night-time. Its users love its backlighting, soft keys and compact size, but do complain about the layout.

This 2-color USB-wired keyboard reduces eyestrain and increases productivity with improved peripheral vision. It has smooth, soft keys made of silica gel that provide anti-static and anti-electromagnetic interference. If you are looking for a keyboard with large keys and easy on the eye orange and blue backlit, this iMBA keyboard might be a good pick.

In general, users have a favorable opinion of this large print keyboard, and they praise the useful 2-color backlighting. They love that this keyboard can be easily used at night when the light is off.

Although purchasers appreciate the compact design of the iMBA orange and blue backlit keyboard, they feel it is to the detriment of the layout. Many buyers are strongly dissatisfied with the size and position of several keys, including backspace key and right shift key.

If you are looking for a large print US English keyboard, you might want to consider this USB-wired keyboard offered by Ablenet. Users like its functionality and design, but there are complaints of poor responsiveness of the keys and malfunction.

This product is a large print keyboard with big black letters on a yellow surface, suitable for those with conditions that cause visual impairment or low vision. It features additional keys which is great because it allows for easier access to commonly used commands (one-touch e-mail, Internet and media hot keys). If you are looking for a bit larger than a standard keyboard with slightly larger than normal sized keys, this might be a good option.

In general, users have a favorable opinion of this keyboard for visually impaired. They like its functionality and no need for installation. Plus, customers love that keyboard’s profile is exactly the same as any other keyboard.

However, one buyer complains about extremely poor feedback from the keys. Another dissatisfied user shares that this large print keyboard stopped working soon after the purchase. Moreover, he says that he bought two more which had even shorter lifespan.

The first large print keyboard we took a look at is manufactured by Nuklz. This high-contrast option is built for individuals who have difficulty seeing in low light, those with visual impairments and for people that are just learning to type who need larger and more recognizable lettering on the keys. It connects via USB- so this is not a wireless option, but it will get up and running pretty quickly once you plug it in.

The second option we examined is the Azio back-lit extra large print keyboard. This large print option is particularly unique because it has five different back-lit colors that you can change- it also comes in a three color options.

The third large print option we looked at is the EZ Eyes LG keyboard- the manufacturer says that its key lettering is four times larger than your conventional keyboard with a high-contrast yellow and black coloration.

The last option we examined was the AbleNet- this is striking yellow option has the standard 104 key layout with keycaps printed with extra large lettering highly visible in low light conditions. It is marketed to individual suffering from vision impairments caused by glaucoma, cataracts, macular degeneration and diabetic retinopathy.

As well, it is advertised as a useful solution for special needs schools and libraries, as well as providing reasonable accommodations inside business environments for those impaired by vision difficulties and other relevant medical disorders.

The bold black typeface contrasts with the brash yellow keys- this enables users to speed up their keystrokes because of the increased discoverability of the lettering.