The Jotaro hat design was an inspiration drawn from a manga character called Jotaro Kujo. Jotaro is a protagonist in the JoJo’s Bizarre Adventure 3rd section that was written by Hirohiko Araki. He is a master strategist who possesses a power for fighting, which he thinks is evil force possession (Source).

His hat is fascinating as no one knows it’s starting or ending point. It perfectly blends with the hair and rarely comes off apart from a time he is involved in a fight. The front of the hat is designed very well and looks decent. 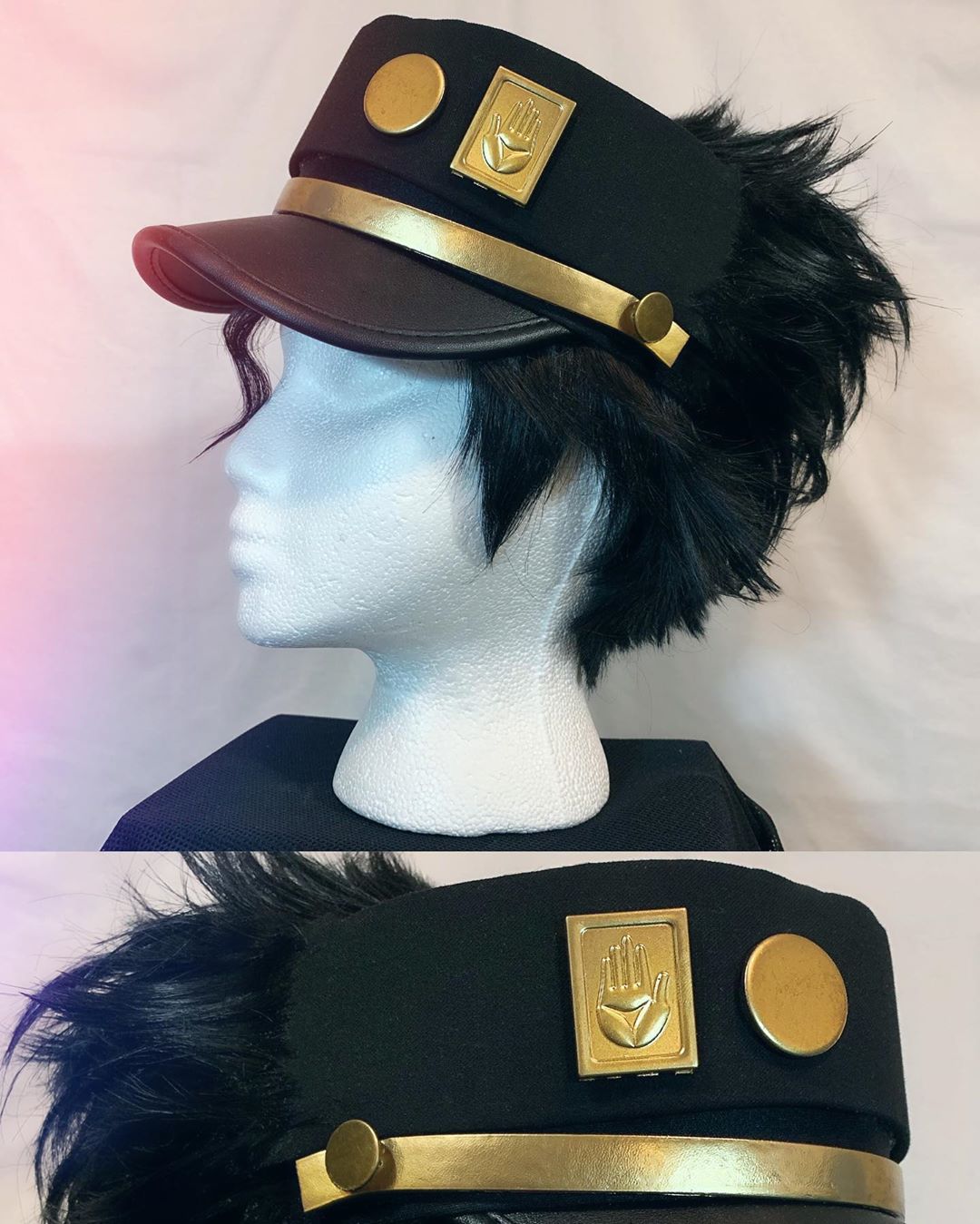 Are you a Jotaro Kujo fan? You can relive the experience by getting a Jotaro hat. I know you’re here for more details, so let’s dive in. 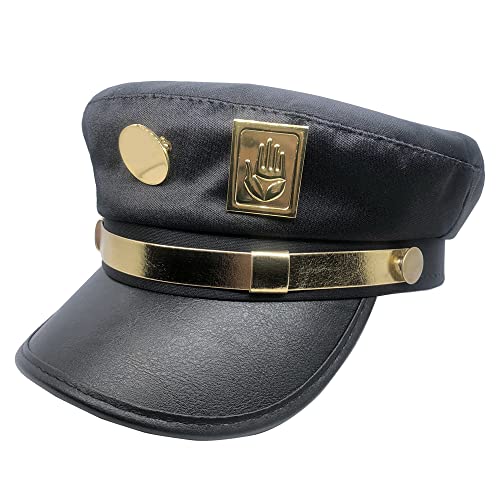 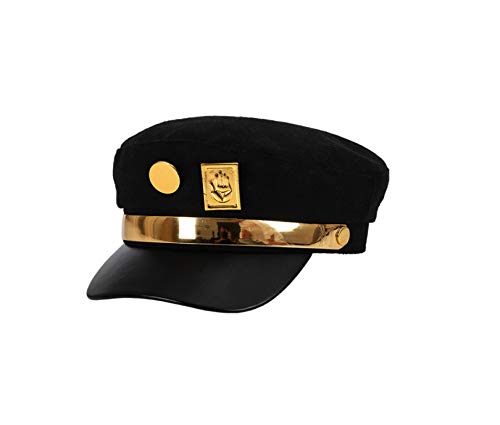 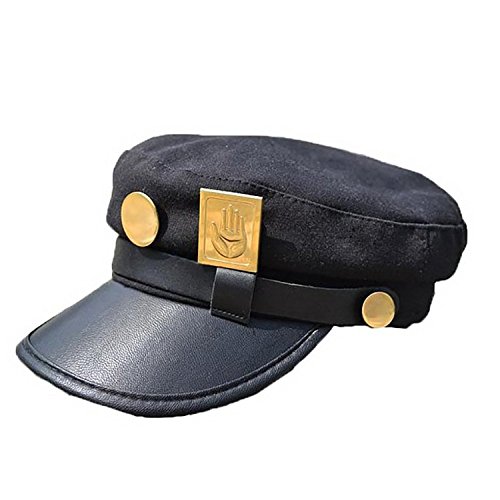 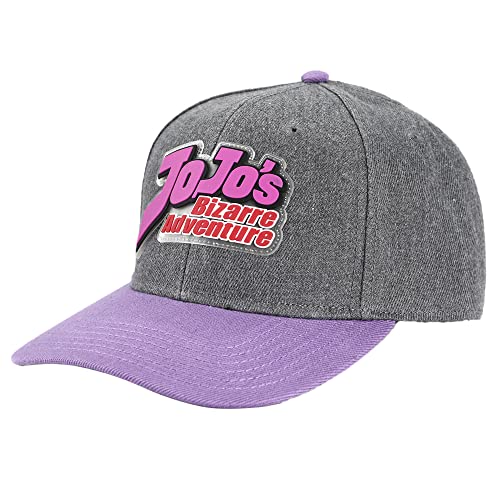 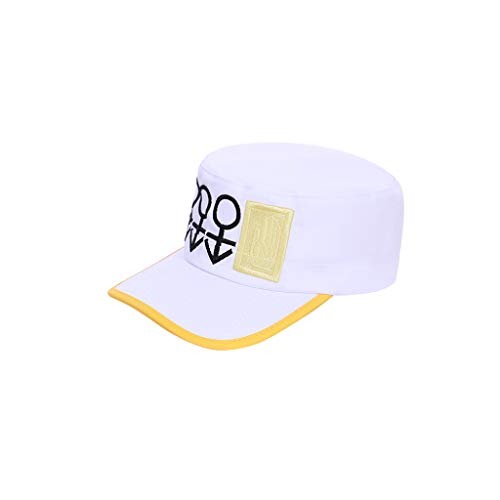 Most of the customers who purchased this hat are happy about it and its build quality. They’ve offered some general insights about the hat such as: 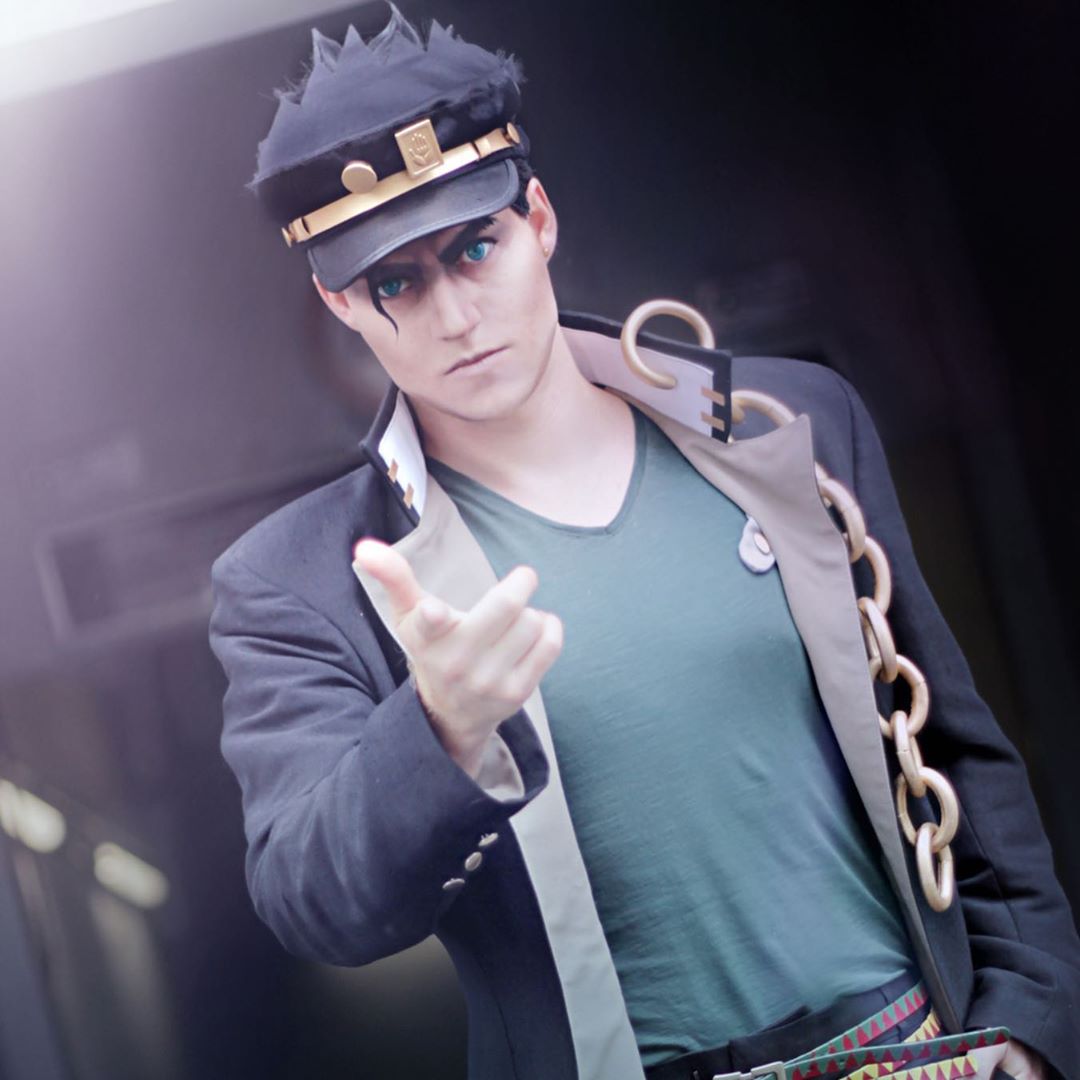 The Jotaro hat is a stylish black hat made from high-quality materials that mimic the hat worn by the manga character called Jotaro, as mentioned earlier. It features a front with yellow circles and hand-like objects to complete the look.

It is mainly bought for Coplay, to get used as a conversation piece, for general hat purposes or by fans that like to associate themselves with Jotaro. Good events to wear the hat include parties, Halloween, as well as sporting events.

It’s very durable except for the pins which are used for the front objects. The sewing thread is well-proportioned and sturdy enough to add on to its durability. Its top has a floppy fabric; the bill and the band are relatively stiff, too, making it get an excellent shape that makes it a unique looking hat.

The hat has become so famous such that there is a wide variety of gifts made with Jotaro wearing the hat. They include branded t-shirts, hoodies, miniatures, hat pendants, adventure charms, posters, and many more gifts.

Can someone please explain to me how Jotaro’s hat works? from StardustCrusaders

The Jotaro hat is mysterious as much as it is fashionable. The writer of the Jojo adventure-Hirohiko Araki – made the hat unique and recognizable so that Jotaro could have a unique silhouette. Here are some of the beliefs about the hat:

The hat resembles a worn, ragged Japanese schoolboy’s hat in terms of style. Jotaro uses a hair clipping on the back of the hat and cuts it, leaving that part with hair coming out.

The hat is organic. Every time it falls off during a fight, Jotaro grows a new hat.

It is so ragged; it even looks like it seamlessly fuses with his hair.

When Jotaro wears hair with a different color, it can be seen that it is part of his hair. This cannot be easily seen when he is wearing a black hat.

If Jotaro takes off his hat, it is only a regular hat. However, every time he wears, it seems to merge seamlessly with his hair.

Jotaro’s hair is torn from the backside, a stylistic choice. Despite being torn at the back, the hat is also permanently glued onto his head.

Very rarely has the hat ever come off, no matter what.

Jotaro’s body was only a vessel. His hat was the real Jotaro- his second stand power is to have his hat meld into his hair

The only few moments when Jotaro takes off his hat, or it gets knocked off his head is when his power doesn’t possess him. 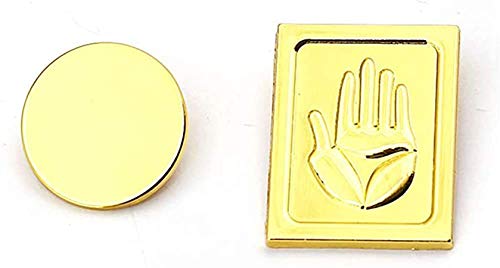 The hat features some unique golden fins at the front. This gives it its signature look. Losing such pins can easily affect the feeling associated with wearing the hat.

The good thing is that the pins can be bought separately and attached with fins.

There are many pins available but are all designed the same; one front circle and another with an indrawn hand.

You can add the Jotaro hat on the Roblox or find one. However, for this to be a success, it has to pass quality assurance and get approval.

There have been numerous attempts by users to add a Jotaro hat. Still, it has only gone as far as being favorite but not getting accepted or passing quality assurance.

Despite the JoJo adventure being written a while back when memes were not even conceived, the Jotaro hat has still maintained relevance in the social media era. Part of this was helped by a related movie being released in between.

There are numerous Jotaro memes around on platforms such as Reddit, Twitter, Facebook, and comic book communities. Moreso, exciting GIFs are also used by people when giving responses on social media platforms. The best part? People have gone as far as making a Minecraft like Jotaro with his famous hat.

That’s not all, modern 3D print miniatures of Jotaro wearing the renowned hat have become more popular among hobbyists and enthusiasts.