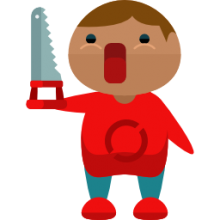 The wallboard saws we examine below are all fixed blades, as opposed to folding or retractable options. You can purchase a single edged (Stanley FatMax, Wallboard Tools)  or double-edged jab saw (Great Neck, Sheffield)- with the double-edged drywall saws providing more dynamic push/pull cuts (Source). 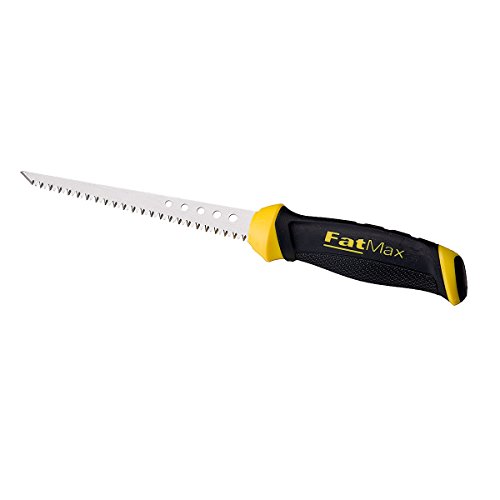 The Stanley FatMax jab saw is a single-edged saw that features a 6-1/4" long blade, induction-hardened teeth, with a sharpened tip that helps perform the first drywall or cement board punch.

Stanely says it's ideal for wood, drywall, durorock, & plastics- a versatile, controlled and anti-slip option that is built for longterm durability.

Its thick, fatigue-resistant handle is ergonomically designed to increase comfort during extended use on job sites or for home-repair tasks.

Let's take a look at 5 of the best-selling wallboard sheet-rock saws on the market today and see how they compare.

This FatMax 6-inch jab saw offered by Stanley is well-made, cheap, sharp, and it’s suitable for drywall, wood, and plastic. Users love the price and the high-quality design, but some do note that the teeth are too big.

The Stanley hand jab saw measures 3” x 3” x 1”, and it features SharpTooth technology for cutting 50% faster than other saws, induction-hardened teeth that stay sharp, a 6-inch blade, and a weight of 4.8 ounces. The saw also has an ergonomically designed and slip-resistant grip, a sharpened tip for puncturing drywalls, and a limited lifetime warranty.

In general, purchasers have a high opinion of the Stanley jab saw, and they agree that it’s one of the best hand saws available. A buyer comments that he saw cuts through drywalls quickly and he had no issues with its performance.

He adds that the teeth are sharp and that the handle is extremely comfortable and that you don’t get tired quickly. As a professional contractor, he highly recommends it to anyone looking for the best jab saw. Another satisfied user states that after two years of use, the hand saw is still as good as new. However, some customers have complained that the quality of the jab saw is not as they expected and that it won’t last for years.

Some also note that they had problems cutting through wood and that it rusted quickly.

This 6-inch drywall utility saw offered by Walboard Tool is well-designed, comfortable to use, light and cheap. Users love the price and the sharpness of the blade, but some do note that they had problems with the tip.

The Walboard drywall saw measures 13.2” x 3.8” x 1”, and it features a high-carbon steel blade, a chisel tip to punch wallboards, an aggressive tooth designed for smooth cutting, and a weight of 0.38 pounds. The jab saw also has a soft handle for comfort, and you can use it to cut electrical boxes, plywood, and masonite.

A buyer comments that this wallboard saw leaves clean cutting edges and that it is the sharpest jab saw that he has ever encountered. He adds that the blade looks durable and that it would last for years.

Another reviewer states that this is one of the fastest drywall saws and that it’s far better than similar products. He warns that you should make sure there are no wires above the area you’re cutting, or the saw would cut through them. Another customer says that the teeth are very sharp and that the handle is comfortable.

He highly recommends it to anyone looking for the best drywall saw. One user complains that the tip of the blade broke quickly, but he shares that the teeth cut smoothly.

If you are in need of a reliable wallboard saw, you might take a look at this double edge jab saw offered by Great Neck. Users love the comfortable handle, but some do note that it’s overpriced for them.

The Great Neck jab saw measures 13.5” x 2.5” x 0.9”, and it features hardened and tempered teeth for durability, a double edge design for fast cutting, a pointed tip for punching, and a weight of 2.7 ounces. The wallboard saw also has an oversized rubber grip that reduces hand fatigue, and it’s suitable for wallboards and synthetic building materials.

A customer comments that the Great Neck wallboard saw is the only one saw strong enough for jab cuts that he has encountered and that he is very satisfied with its performance and construction. Another reviewer shares that the wallboard saw is perfect for do-it-yourself projects and that you should cut gently and carefully because the blade is very sharp. He recommends it as the best double edge wallboard saw.

This wallboard saw offered by Stanley is affordable, well-made, well-balanced, and an excellent choice for making cuts in plasterboards. Users love the sharp pointed tip, but some do note that the saw doesn’t come with a sheath.

The Stanley hand jab saw measures 13.8” x 2” x 1”, and it features a self-starting, point-sharpened tip for plunge cuts, a 6-inch blade which is epoxy-bonded and ferruled to the wooden handle, and a weight of 3.4 ounces. This jab saw is three times more durable than other blades, and it comes with a limited lifetime warranty.

In general, users agree that the Stanley wallboard saw with a wooden handle is one of the best jab saws available. A buyer comments that he was surprised how well the Stanley jab saw performed and that the tip is shaped perfectly. The reviewer adds that he had no issues cutting a hole into drywall and that the teeth are very sharp.

Another customer states that the hand saw is easy to handle and that it’s also useful for carving pumpkins and gourds for Halloween. A user shares that he doesn’t use the saw very often, but it’s handy to have it around, and when he needs it, the wallboard saw works smoothly. However, some customers have complained that the saw is overpriced and that they could achieve the same results with a cheaper saw. Some users also note that the construction is flimsy.

If you are looking for a top-notched double edge jab saw, you might take a look at this 6-inch wallboard saw offered by Sheffield. Users love the high quality of the jab saw, but some do note that it’s not as efficient as they expected.

The Sheffield wallboard saw measures 2.8” x 14.2” x 0.2”, and it features a double edge design, a 6-inch blade, a weight of 5.6 ounces, and a chamfered drive end for quick attachment. This jab saw is made of high-carbon steel and high-quality chrome vanadium steel for extra strength and durability. It’s also resistant to corrosion.

A purchaser shares that he was very surprised by the quality of the Sheffield 6-inch double edge jab saw and that he doesn’t have any issues with its performance or functionality.

Another reviewer adds that the wallboard saw arrived on time and that it was well packed. He states that the double edge is very convenient for cutting in both directions and that its quality surpasses its price.

The customer highly recommends it to anyone looking for a cheap wallboard saw. Another buyer mentions that he used the saw to cut holes in drywall and that it cuts quickly and smoothly. However, one user has complained that the blade is too flimsy.

The first jab saw we examined was the Stanley six-inch FatMax option- it features a proprietary a cutting technology called SharpTooth that Stanley says is able to cut 50% faster than traditional saws. This keyhole saw has a six-inch blade and ergonomic handle that is slip-resistant and designed for maximum comfort when cutting.

The second jab saw we examined was the Wallboard Tools drywall utility saw- it is advertised as a high carbon steel blade with a penetrating chisel point, 6-inch blade length, and a comfortable handle for extended push/pull sawing.

The third wall board saw we examined is manufactured by Great Neck- it is a 6 inch saw with tempered and hardened teeth and an extra large rubber grip to handle ergonomic keyhole sawing.

The third jab saw we looked at does not have a double blade feature- it is the Stanley wood-handled, wallboard saw. Stanley advertises this saw as especially effective for plasterboard and often used to create cut outs the four types of electrical outlets- using its sharpened point for powerful plunge cuts.

The last double edged wallboard saw we examined is produced by Sheffield-it has a 6-inch blade and is built from S-2 strength steel with a chamfered drive end.

When it comes to cutting drywall, it is actually one of the easier materials to work with when remodeling. Drywall itself is actually a combination of gypsum rock that is enclosed in wrappers oaf recycled paper. This wall sheathing is a fire-resistant supply that is pretty simple to hang and work with, even providing the means for intricate layouts. The right tools help to make working with it easy and effective.