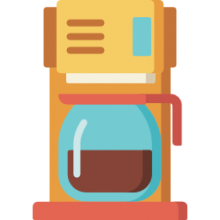 The way iced tea makers work is by brewing bagged or loose tea and then dripping it onto a pitcher of ice that cools it down (Source). This removable pitcher can be used to serve or store your drink.

We examined 3 Mr. Coffee iced tea makers- the TM1, TM70 and the TM33. The primary difference is that the 1 and 70 have plastic pitchers, while the TM70 has a glass pitcher. The TM1 also lacks adjustable brew strength, while the TM70 and TM33 have that feature (Source).

(Scroll down for full comparison table).

The Takeya Flash Chill is a BPA-free (bisphenol A is an industrial chemical some buyers look to avoid) option that is manually, as oppose to electrically, powered. You make the tea by shaking it- so it's also the only portable solution.

The TM1 tea maker has a 2 quart pitcher capacity. It's designed to brew both tea bags and loose tea. Conveniently, you can remove its brew basket. It ships with a one-year limited warranty. Includes an on/off power light.

The way it works, you need to fill it with water to the first line marked on the pitcher. That water is then poured into the brewer. If you want to sweeten your tea, you can add a couple teaspoons of sugar to the pitcher. 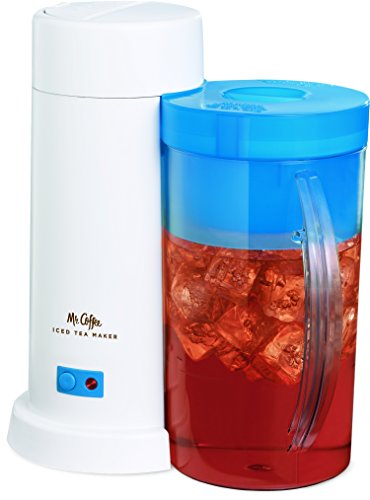 This ice brewing machine offered by Mr. Coffee is practical, easy to use, and suitable for loose or bagged tea. Users love that the tea gets ready in minutes, but some do note that the maker is not dishwasher safe. The Mr. Coffee iced tea brewer measures 11” x 7” x 15”, and it features a 2-quarter pitcher, an on/off indicator light, and a fast brewing cycle.

Another great thing about this tea maker is that it has a removable steeping basket so that you can clean it quickly. Moreover, the iced tea machine has a 1-year limited warranty.

In general, users have a high opinion of Mr. Coffee iced tea maker, and they praise its performance and design. A buyer comments that the maker fits easily in a fridge or a storage cabinet and that it takes only 3-5 minutes to brew the tea.

She adds that you have to follow the instruction closely to avoid leaking. Another purchaser mentions that the instructions are easy to comprehend and that he highly recommends this as the best ice tea maker. A reviewer also states that the 2-quart iced tea machine makes a delicious batch of tea every time.

However, some customers have said that the tea brewer is harder to operate than they expected and that the on/off button doesn’t work properly. Some users also complain that the tea is too weak. 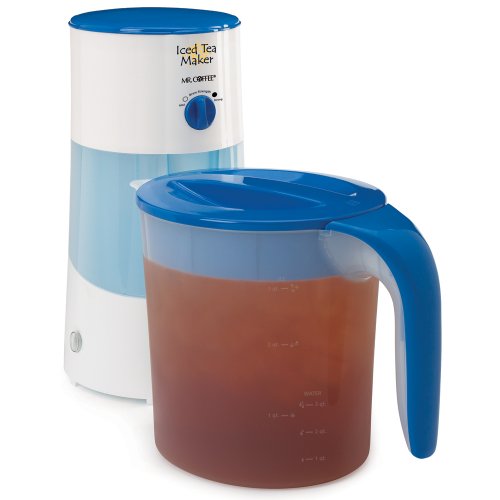 If you are an iced tea fan, then you might take a look at this 3-quart iced tea maker offered by Mr. Coffee. Users love the size and the design of the tea brewer, but some do note that the on/off button doesn’t work as it should.

The Mr. Coffee 3-quart iced tea maker measures 15.5” x 8.5” x 12.5”, and it features a removable brewing basket, a non-drip spout, a water window in the reservoir, an auto shut-off for extra safety, a power indicator button, and a 1-year limited warranty. Another great thing about this device is that it has an adjustable brew strength, and it’s suitable both for loose and bagged tea.

A reviewer comments that the auto-shut off option is really convenient because you don’t have to worry about forgetting to turn the blue iced tea maker off. He adds that the brewing machine makes a delicious, strong tea and that it’s easy to set it up.

Another buyer observes that Mr. Coffee tea maker is easy to clean and that it doesn’t make a mess in the kitchen if you align the pieces properly. A user adds that she has been using the tea maker daily and that she doesn’t have troubles.

However, some customers have said that they like the old version of the Mr. Coffee iced tea brewer better and that the new model leaks. Some purchaser also notes that the maker is not as durable as they expected. 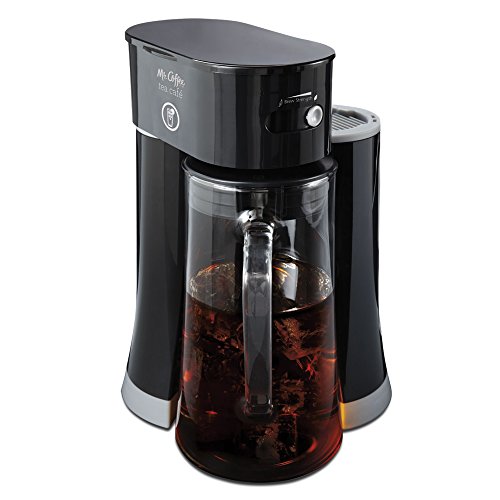 This iced tea brewing device offered by Mr. Coffee is handy, easy to use and a product of a high quality. Users love that the machine brews up to 2.5 quarts of tea in minutes, but some do note that the glass pitcher is not very durable.

The Mr. Coffee 2-in-1 iced tea maker measures 11.4” x 10.5” x 14.8”, and it features a fast brewing cycle, a brew strength selector, an auto shut-off for safety, and a light indicator. Another great thing about this brewer is that the pitcher and the lid are dishwasher safe. Moreover, it has a basket with a permanent filter for easy cleaning.

An online reviewer mentions that Mr. Coffee brewing system doesn’t leak and that it makes a strong tea batch every time. She adds that the iced tea maker looks very elegant in her kitchen and that she highly recommends it.

Another buyer observes that it’s very easy to figure out how to operate the brewer and that it doesn’t take much space in the fridge. A user also states that the glass pitcher is very easy to clean and that it’s holding up pretty well even after months of regular use. However, some customers have said that the iced tea maker malfunctioned quickly and that the lid deformed in a couple of months.

Some also warn that you have to handle the glass pitcher very carefully to avoid cracks.

This white ice tea brewer offered by Capresso is fast, elegant and an excellent choice for tea bags and loose tea. Users love the size of the maker, but some do note that the pitcher is too fragile and expensive to replace.

Another great thing about this tea maker is that it has a removable water tank and the pitcher is dishwasher safe. Moreover, you can adjust the brewing strength, and the package includes a recipe book.

In general, users have a mixed opinion regarding the Capresso white iced tea maker, and they agree the brewer is not very durable, especially when it comes to the glass pitcher. A satisfied buyer comments that he has made over one hundred bunches of strong, delicious tea and that the Capresso brewer didn’t leak even once.

Another happy user observes that the electric tea maker holds plenty of loose tea and that he recommends to anyone who loves iced drinks. He adds that it’s easy to operate the brewer and that the pitcher doesn’t show signs of cracking.

On the other hand, an unhappy reviewer states that the iced tea maker is too expensive and that it worked only for 13 months before malfunctioning. Another purchaser notes that the pitcher breaks even without external stress and that it’s not covered by the warranty. 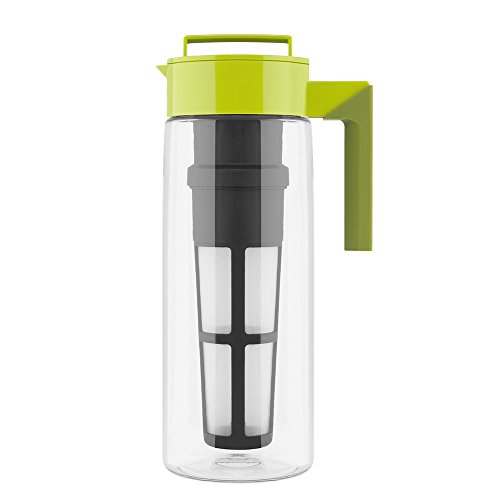 If you are looking for a top-notched tea making machine, you might take a look at this chill iced tea maker offered by Takeya. Users love that the maker is suitable for loose leaf tea and tea bags, but some do note that it’s too tall for some fridges.

The Takeya flash chill tea maker measures 6.1” x 4.1” x 12.2”, and it features a 2-quart pitcher, an airtight lid, and a weight of 14.4 ounces. Another great thing about this brewer is that it’s made of BPA-free tritan, and it’s available in several colors. To make ice tea, you only need to put leaves in the brewer, add hot water and shake it.

In general, users have a high opinion of the Takeya chill ice tea maker, and they praise its design and usefulness. A reviewer observes that the maker has a larger brewing area than other models and that you can prepare cold tea quickly. He adds that you can use it with boiling water and that the lid is watertight.

Another buyer comments that the filter is easy to clean and that the tea maker fits perfectly in his refrigerator. A user also notes that she hasn’t encountered any leaks and that the flash chill tea maker is light and doesn’t smell of plastic.

However, some customers have said that the ice tea maker is awkward to use and that the lid breaks. Some also note that it leaks.

The first ice tea maker we took a look at was manufactured by Mr. Coffee- it is a two-quart option designed to work with both loose as well as teabags.

It features an automatic shut off once the brewing is finished, is capable of creating ice tea as well as infused iced tea in a couple of minutes. The way it works, all you'll need to do is to place your teabags or loose tea inside its brewing basket, add ice to the pitcher and fill the reservoir with water, and you'll quickly have some fresh tea to drink.

The second option we examined was another Mr. Coffee iced tea maker- it comes in blue, teal as well as watermelon colors, marketed as a simple way to steep bag or loose tea.

Buyers say that if you need to clean it, they found that baking soda is the best option to remove stubborn stains. You can also find replacement pitchers online. As well, honey or sugar sweeteners can be added before or after the steep to flavor your creations.

The third iced tea maker is another Mr. coffee brewing system that holds 2.5 quarts of water and includes an integrated strength selector switch for milder or bolder flavoring profiles.

Some families say that they had been in the habit of purchasing bottled iced tea from Snapple- but the expense added up, plus they wanted to make healthier options that didn't contain as many calories.

The fourth option we examined is the Capresso. This 2.5-quart option includes a removable water tank, permanent filter, and the pitcher is dishwasher safe. Examining their promotional materials, they say you can even add in fruit after or before the brewing for an exciting flavor profile.

The last ice tea maker we examined it is manufactured by Takeya. It comes in one or 2-quart options and comes in avocado, raspberry and blueberry colors. A BPA-free option, it's designed to create eight servings, in the case of the 2-quart option. Marketed as a quick tea maker- they say that they trap nutrients in flavor vapors during the steep, infusing them back into the drink itself.

The way it works, you pour in your loose tea, and some hot water, fill it with ice, shake it up and then drink. They have their own line of tea as well that's marketed as gluten free, dairy free and packed with natural ingredients that are not impaired by preservatives or sweeteners.

It's called Flash Chill because it's designed for a half a pot of tea to combine with ice so that it is quickly chilled and you don't have to wait for it to get cold.