In this post, we examined 5 of the best-selling ice ball makers.

These devices are used for shaping ice into balls instead of cubes; this makes cocktails and other drinks more visually appealing.

Plus they melt slower so you don’t have watered-down drinks.

Fill the unique tray with water then place into your freezer until the water is frozen. As with ice cubes, they look best when they’re made crystal clear (Source).

While most people are content with using regular ice cubes, fine restaurants and people with more sophisticated sensibilities say that spherical ice is better for your beverage.

The advantage to ice balls is that they melt slowly, which means your drink doesn’t get watered down as quickly. Another advantage is that your drink stays colder longer (Source).

If you’re ready to take your cocktails to the next level with spherical ice, here are five options to consider.

These ice ball molds offered by Chuzy Chef are easy to use, reusable, affordable, and excellent for chilling your drink.

Users love the price and the quality, but some do note that they are not happy with the shape. The Chuzy Chef sphere maker features a revolutionary design to make the perfect orbs, and four molds, which measure 3-1/2” in diameter with a height of 6”. Another great thing about this product is that it’s dishwasher and microwave safe so that you can clean them in seconds. What’s more, the molds have a lifetime guarantee.

As a whole, users have a high opinion of the Chuzy Chef orb maker, and they praise its design and performance.

A happy buyer mentions the molds are very useful for parties because the spheres get ready quickly. He adds that they are easy to use and that with little practice you can make perfectly round balls. Another purchaser observes that the balls are crystal clear and big and that they are excellent for whiskey or scotch.

A reviewer also comments that the molds take almost no space in the refrigerator because you can stack them. He says that Chuzy is one of the best ice ball makers that he has ever used. However, a couple of customers have noted that the orbs are not perfectly round, but oval instead and that they crack when you take them out. 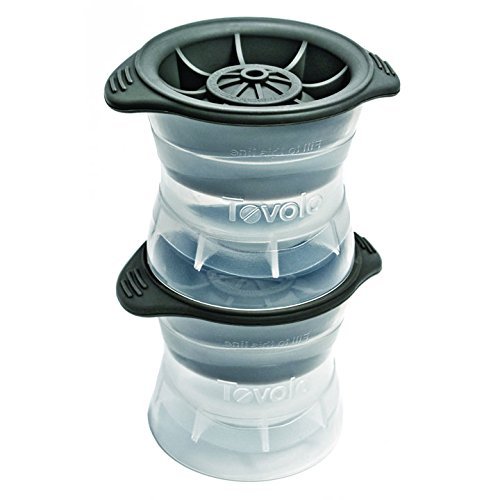 Are you wondering how to create the perfect round ice balls to cool down your drinks? Then you might consider these sphere molds offered by Tovolo. Users love the price and the leak-free design, but some do note that the spheres are uneven and cracked.

The Tovolo sphere maker features BPA-free plastic construction, a tight silicone seal to prevent leaking, and two molds per set. It creates 2.5” orbs, which melt slowly to keep your drink cold longer, and it’s dishwasher safe. You can also use it with fruit juice and add lemon slices to the water. The Tovolo products are available in three styles – colossal, sphere, and highball.

A user mentions that the mold looks well-made and sturdy and that it’s perfect to chill alcoholic beverages because the balls don’t water them down quickly. He adds that he highly recommends it as one of the best cheap ice ball makers available. Another buyer comments that you don’t need any instructions to find out how to use the molds and that the package arrived well-packed. He also shares that the silicone is flexible, so it’s easy to take out the balls.

A user also observes that the spheres are easy to fill and that you can stack them in the freezer. However, a couple of customers have noted that it’s difficult to remove the spheres from the molds and that the balls are too big for a glass. Some also complain that they are not completely round. 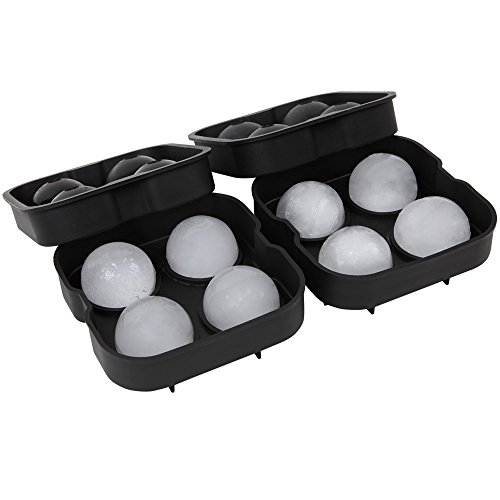 These ice ball molds offered by Arctic Chill are well-designed, easy to fill, and an excellent choice for those do not wish to water down their drinks.

Users love the price and the style options, but some do note that they taste funny. The Arctic Chill ice molds are available in four sizes – 1”, 1,5”, 2”, and 2.5”, and you can choose between cubes and balls. Another great thing about this product is that it features a BPA-free construction, approved by the FDA, and it’s microwave/dishwasher safe. What’s more, you get a lifetime guarantee.

A reviewer says that the 2” ball mold works perfectly as long as you seal it properly and that he finds the balls easy to fill.

He adds that sealing up requires some efforts, but he is happy with his purchase. Another user comments that he bought several as a gift and that everybody loved them. The buyer also states that the spheres are perfectly round and clear with no cracks and that they don’t melt fast. A purchaser also observes that it’s easy to remove them from the tray and that he uses them weekly with no issues.

However, a couple of customers have complained that the balls start to taste rubbery in time and that it’s hard to remove them from the mold. Some also point out that it’s difficult to fill the forms without spilling water everywhere. 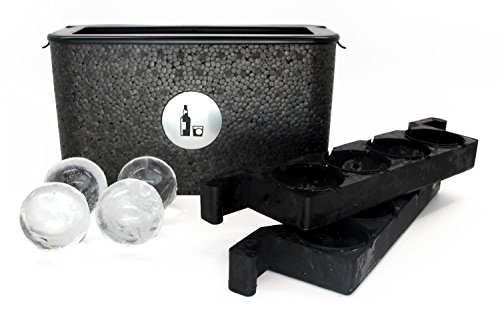 If you are looking for the best ice ball maker, you might take a look at this chest offered by Wintersmiths. Users love the quality and the perfect rounds balls, but some do note that it’s expensive.

The Wintersmiths chest features 7 3/8″ x 4 7/8″ x 13 3/8″, and it’s built using a durable food-grade material. Another great thing about this product is that it eliminates air bubbles so that you have a crystal clear ball, which won’t break up when you put in your drink. In addition to this, the product is manufactured in the USA.

As a whole, users have a high opinion of the Wintersmiths product, and they highly recommend it as one of the best ice ball makers available. A reviewer comments that it takes time to get used to using the chest, but it works wonderfully once you’ve gotten the hang out of it. He recommends that you check the size to make sure that it will fit in your fridge because it’s quite large.

Another user mentions that you need around 30 hours to make a batch of four, but it’s worth waiting because you get the perfect spheres for your drink. However, a couple of customers have noted that the chest is not as durable as they expected and that if you leave it too long in the fridge, it will freeze and break. 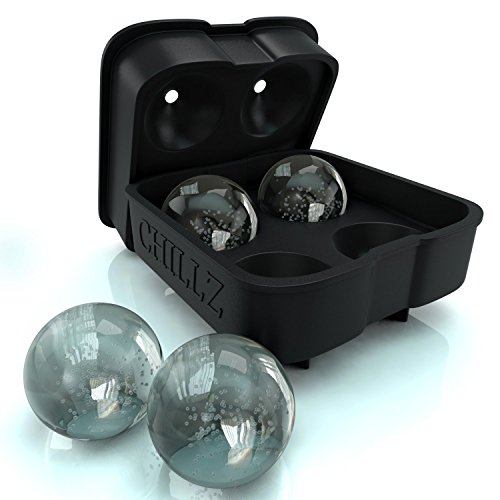 This mold for ice balls offered by Chillz is durable, well-made, affordable, and an excellent choice for whiskey and highball cocktails. Users love the price and the flexible tray, but some do note that it takes time until you guess how much water to pour.

The Chillz mold features a BPA-free food grade silicon body to prevent cracking and breaking, a 4 x 1.78” ball capacity (four per mold), and it’s dishwasher safe. Another great thing about this product is that you have a lifetime guarantee and you can also fill it with soda, herbs, or juice improve the taste of your beverages. What’s more, it’s available in five styles.

A buyer comments that you’ll hardly find another product to beat the price and quality of the Chills ice ball mold and that the instructions are simple and easy to follow.

Another user observes that the spheres are round, but not perfectly clear. Nevertheless, he is satisfied with his purchase and would recommend it to anyone looking for affordable ice ball molds. A reviewer also shares that he has been using the mold for several weeks with no cracking issues and that it’s working far better than he expected.

However, a couple of customers have noted that the orbs are as larges a golf ball and that they are too small for their liking because you’ll need 3-4 to chill your drink. Some also point out that it’s difficult to fill the molds without spilling water.

Over at The Spruce Eats, they wrote up an entire article dedicated to making ice balls to help avoid water down drinks.

Indeed, one of the primary benefits of an ice ball is that it won’t melt so fast and water down your cocktail.

They say that if you’re having a scotch on the rocks, a gin, and tonic, or a vodka soda, you end up drinking more water than you do the actual drink.

So if you’re making homemade drinks and want to avoid this problem, they say the solution is to create giant ice balls that melt slow.

They advised that an ice ball is ideal for straight on the rock liquor drinks as well as for things like Black Russians.

In terms of the size, the ideal proportions for one are 2″ in diameter, so that they basically measure the size of a Racquetball and will easily fit into the majority of lowball and highball glasses.

Different Ways To Make Them

Carving is a more time-intensive craft and is popular in Japan.

They say that a professional carver can craft 1 in under 10 minutes working from a large brick of ice.

Another DIY strategy is to use balloons, fill them with water, and hang them from the inside of your freezer, creating a teardrop-shaped design.

How Long Do They Last

According to the article, how long they last will primarily depend on the type of liquor or liquid that is poured over them, how hot or cold the room is, and the dimensions of the glass itself.

If you want to increase longevity, you can employ a chilled glass and make sure that the drink ingredients are themselves cold or chilled.

So you could get several hours of use from a single ball and even find, depending on how fast you drink, that they will last for several drinks.

They are careful to point out, however, that if you take your drink outside into the Summer sun, obviously is going to melt pretty fast.

Over at Instructables, a user posted his own DIY tutorial for creating an easy ice ball maker.

He explains that he was interested in creating an ice sphere for his drinks, but found the online purchase options were way too expensive.

This tutorial provides detailed project guidelines, saying that you’ll need to have on hand an Exacto blade, a ball pit ball, some water and a freezer.

Next, you need to find the seam on the ball, use the Exacto knife to create a 2-inch opening, give it a little squeeze to open up the aperture and then fill it up with water.

After freezing for 5 hours, you can open up the ball and you’ll find the perfectly clear spear, with few flaws, and without any cracks or cloudiness in it.

One person responded by saying that it’s best to boil the water before freezing and also to drill the hole rather than using an Exacto knife to create the slip because it will reduce the air pocket.

Another person said that when he has tried to create one of these, his is nearly always opaque and white.

One person responded by saying that this is caused by dissolved air, IE gas. The way to avoid this is that you need to cast the water so that it will freeze clear.

This can be accomplished by using it an ultrasonic bath, purging it with helium or repeatedly doing a freeze/thaw on it.