How To Install A Toilet Seat Cushion Riser 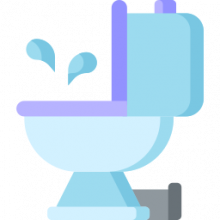 A toilet seat cushion riser comes in handy when creating a safe bathroom or toilet for an old or disabled person. Older, or incapacitated, people can find it hard to use the standard toilet, which forces them to bend their hips and knees to sit down fully.

A raised toilet seat makes it easy for people with joint problems to ease themselves comfortably. Installing a raised toilet seat can be expensive, depending on the contractor and the equipment- so a DIY install is a great solution.

Tip: install a toilet safety rail for added security. These bathroom assistance rails are a great way to enhance restroom security and fall prevention in the home.

How To Install A Raised Toilet Seat

Most toilet seats are attached by several screws, which are covered by a cap.

Locate the position of your current toilet screws and remove them using a screwdriver. Use the same screwdriver to remove screws from hinges or a utility knife where the plumber used silicon to seal hinges to the toilet seat. After removing the screws or cutting the silicon, whichever the case, you can now lift the toilet seat from the base.

A raised toilet seat will have notches on the sides and in front. The next thing you do is installing the plastic clips under the toilet bowl’s lip.

The support arms will either be folding arms or stationary arms, and you will install them according to the manufacturer’s guidelines. You cannot go wrong in installing a raised toilet seat with these guidelines.

The last step is to remove hinges from your old toilet lid and seat so that you can use the cover once again. You can now screw the toilet seat lid into the proper position after lifting the hinges on the seat riser.

You do not need to spend your money purchasing expensive toilet equipment and then hiring a costly contractor when you can install a toilet seat riser yourself and save some cash for other things. Another interesting DIY project that could help you- learn how to make an automatic toilet seat, which can make bathroom use much easier to use for injured or disabled people.

The Safest Non-Slip Flooring For Bathrooms

How To Build Steps For A Bathtub

How To Make An Automatic Toilet Seat

←Previous post Next post→
Search
The Safest Non-Slip Flooring For Bathrooms
10 Common Bathroom Safety Hazards
How To Build Steps For A Bathtub
How To Make An Automatic Toilet Seat
How Do Automatic Flushing Toilets Work?