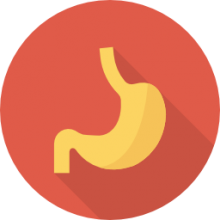 In this post, we examined 5 of the best-selling hernia belts.

A hernia is a term describing tissue — such as the intestine — that protrudes through the muscles in the abdomen.

A hernia belt supports the muscle and keeps the tissue from protruding. This provides pain relief and comfort to the patient dealing with this condition (Source).

The hernia belt provides compression to the abdominal wall and keeps whatever tissue is protruding in place. Most belts are made from elastic, while some use metal or plastic plates to keep the protrusion in place — these are called trusses (Source).

Hernia belts are useful in the treatment of hernias, but people also use them to prevent hernias. When purchasing a belt, experts recommend fitting the belt onto the body when a hernia is pushed back into place. This gives the user the best fit and ensures the highest quality relief (Source).

Here, we look at and compare 5 hernia belts. 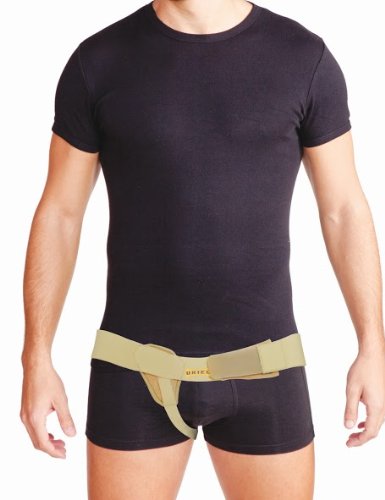 This inguinal groin hernia belt offered by Uriel is efficient, inconspicuous, and available in size from S to XL. Users love the design, but some do note that it’s not as comfortable as they expected. The Uriel groin hernia belt features a soft pad, which supports the weakened muscles and applies pressure.

Furthermore, Uriel hernia belt may be used post or pre-surgery, and it’s suitable to hasten recovery. Another great thing about this belt is that it has no metal parts so that you don’t have to worry about metal detectors. To judge the right size for you have to measure around the hips.

As a whole, reviewers are satisfied with the usefulness and efficiency of the Uriel inguinal hernia belt. A reviewer comments that the hernia belt is so comfortable that he can wear it all day and that it relieves his hernia symptoms. He highly recommends it as one of the best inguinal groin hernia belts available.

Another buyer mentions that the belt stays in place and that it allows you to work normally all day. A purchaser also shares that this hernia belt was a lifesaver for him and made his life better until he was ready for his hernia surgery. However, some customers have noted that the size chart is off and that the belt their ordered wasn’t a good fit. Some also complain that it’s hard to put the belt on. 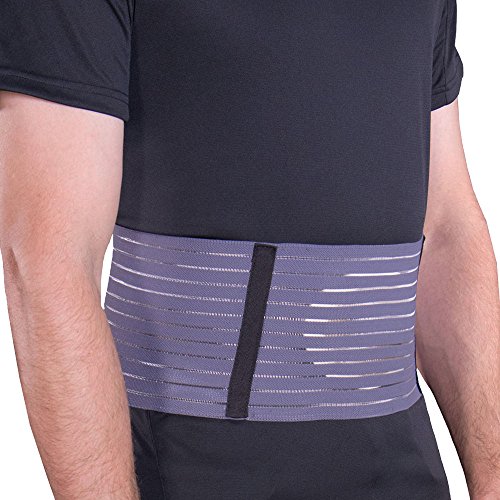 If you have an abdominal hernia and you’re looking for a solution, you might consider this abdominal hernia belt by OTC. Users love the price and quality of the belt, but some do note that it’s not as durable as they expected.

The OTC abdominal hernia belt supports weakened abdominal muscles, and it’s suitable for weak pendulous abdomen, tenderness, and contusions. Another great thing about this product is that the ribbed elastic molds around your body for a custom fit and the foam pad offers rigidity and padding. This abdominal hernia belt is available in six sizes from S to 2XL. To find your size, measure the fullest part of your abdomen.

A user shares that you can wear a shirt comfortably over this abdominal hernia belt and that it works great. The reviewer adds that the Velcro might be tricky to attach/detach, but it’s not a deal breaker for him. Another buyer mentions that the hernia belt helped alleviate his pain and that he highly recommends it.

Another purchaser observes that the belt arrived in excellent condition and that the provided measurements are accurate. He also states that he feels comfortable wearing the belt and he doesn’t have any complaints. However, some customers have complained that the belt is hard to put on by yourself and that the Velcro straps are uncomfortable and poke you in the back. 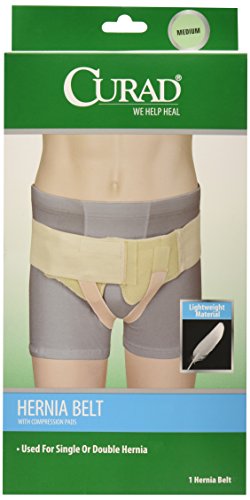 This hernia belt offered by Curad is comfortable, durable, and an excellent choice if you have an inguinal hernia. Users love the design, but some do note that it’s not as effective as they anticipated.

The Curad inguinal hernia belt is made of a lightweight material to provide comfort and breathability, and it has hook-and-loop closure for easy adjustment and compression pads. Another great thing about this product is that it’s suitable for single and double inguinal hernia and the low-profile design allows you to wear it under clothing. However, the belt is available in two sizes – small and medium.

A purchaser mentions that the Curad single and double inguinal hernia belt is slim and light and that it works great for him. He adds that the belt is comfortable and that he wears it daily with no issues.

Another buyer observes that the hernia truss fits him well and that he highly recommends it as one of the best double hernia belts available. A user also shares that the belt relieved his pain and that it arrived fast and in excellent condition.  However, some customers have complained that the hernia belt is too bulky and visible under the clothes. Some also note that the belt is not comfortable and that it doesn’t support their hernia well. 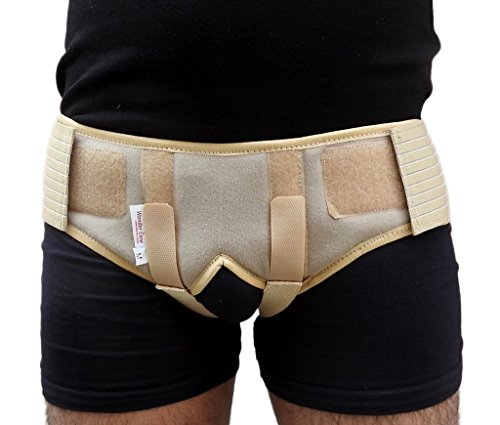 If you’re wondering what to do about your double inguinal hernia, you might take a look at this inguinal hernia truss offered by Wonder Care. Users love that the belt is also suitable for left side or right side hernia, but some do note that it’s too bulky.

The Wonder Care hernia support belt features cushions which apply pressure on the hernia’s location, Velcro for adjusting the pads, adjustable elastic straps, and hook-and-loop closure. Another great thing about this belt is that you can wear it under your clothes with no problems and it’s available in three sizes – M, L, and XXL.

In general, buyers have a favorable opinion of Wonder Care double inguinal hernia belt, and they’re pleased with its design and efficiency. A reviewer comments that the hernia support truss arrived quickly and that it eased her pain. She adds that the belt adjusts snugly and that it’s comfortable and light.

Another user mentions that he wears the hernia belt all day with no discomfort and that you can clean it in the washing machine. A purchaser also observes that the belt stays in place throughout the day and that you can adjust it easily for a snug fit.

However, some customers have noted that the stitching is poorly done and that the hernia truss is not very comfortable. Some also state that it doesn’t support their hernia sufficiently.

This ergonomic umbilical hernia truss offered by UFEELGOOD is well-designed, comfortable, and useful for preventing or treating an abdominal hernia. Users love that the belt is suitable for women and men, but some do note that it’s not as efficient as they had hoped.

The UFEELGOOD umbilical hernia belt is made of breathable, elastic material, and it features two splints on each side to reinforce weakened abdominal muscles. Furthermore, the truss has a curved pad for individual position and for additional comfort the pad is made of soft terry cloth. This umbilical hernia truss is available in three sizes – X-small, small, and medium. To find the right fit, follow the provided measurement chart.

A buyer mentions that the UFEELGOOD ergonomic hernia truss worked far better than he expected and that it was a good fit. He adds that he has been using it regularly and that he doesn’t have any complaints. Another reviewer observes that the belt is comfortable and that it helps immensely with the pain. He highly recommends it as one of the best umbilical hernia belts available. A user also comments that the belt is easy to put on and that it’s not obvious under the clothes.

However, some customers have noted that the hernia truss has uncomfortable Velcro straps, which scratch the skin and that they don’t hold very well in time.

As we have seen, these medical assistance devices can provide a measure of pain and discomfort relief after you’ve had an incisional, hiatal or umbilical surgery. By providing compression at the site of the hernia, the abdominal binder is able to provide targeted pain relief.

What are customers saying about the OTC?

One reviewer decided to purchase it from a medical supply store- they say that it helps alleviate discomfort around their incisional hernia. In particular, they wear it whenever they are exercising or lifting heavy objects. I

t was recommended by a physician as a temporary solution until they lost enough weight that they can have surgery. Another buyer was satisfied, saying that he’s able to wear a shirt over it, though it does chafe the skin somewhat after prolonged use. Another reviewer who describes suffering a 15 mm tear in his abdominal wall lining, which causes the upper stomach to protrude, says it is a temporary fix until he’s able to schedule a surgical intervention.

Some buyers wondered what size they should purchase- reviewers recommended that you want to get a somewhat snug fit, keeping in mind that this belt is actually elastic so there is some flexibility. Further, they say that it’s not a bad idea to size down a little bit from your pants size- for example, if you are a 34 waist, you’d want to purchase a small, which ranges from 29 inches to 32 inches, it’s suggested.

What are Vive buyers saying?

One reviewer used it pre-surgery for discomfort relief, saying that it provided a tight but adjustable fit that significantly decreased pain. It includes removable silicone pads which help to target and adjust the application of pressure- these are also washable so you can clean them up after your use. That said, there were some buyers who complained about sizing issues- saying that they had to return this medical support equipment because it was either too big or too small for them.

Another reviewer says it’s been a lifesaver because he’s able to work while he waits for the surgery, though he does complain that the support garment doesn’t position itself high enough on his hips to remain in place during work hours. This means that he has to make daily adjustments- while not a completely perfect solution since it is only temporary as he waits for the surgery, it wasn’t that big of a deal. One buyer did complain that it was poorly made saying that the fabric deteriorated after a couple of days.

What are UFeelGood buyers saying?

This umbilical naval area support solution has received somewhat mixed feedback. One reviewer explained, though, that it was a perfect fit to support a developing umbilical hernia that was producing negative side effects like constipation, back soreness and bloating.

One ancillary benefit is that because of its tight fit the user is eating less and consequently losing weight. Another reviewer says it has been an adequate solution with velcro that binds the belt tightly- though this is a bit of a design flaw because the velcro can extend the edges and consequently scratch up the skin. In terms of getting the sizing right, the seller says that you should measure your waistline and use that as a reference point. For example for a 39 1/2 inch waist, the recommended size is a medium.