In this post, we examined 5 of the best-selling fondue pots on the internet. We ranked them 1 through 5 in the table below.

What are fondue pots?

Fondue is a dish in which people dip bread into melted cheese with long-stemmed forks. While other types of fondue exist, the melted cheese variety is the traditional dish. A fondue pot holds the cheese into which the bread is dipped (Source).

Traditional fondue pots get heat from a flame, usually from a burner filled with alcohol or gel-based fuel. The flame keeps the pot hot enough to ensure the cheese remains liquid. Newer fondue pots use electric to keep the pot hot (Source).

Many experts recommend buying a fondue pot from a reputable manufacturer. This lessens the chance of defects and ensures your pot will last a long time. Also, make sure you know what type of fondue you’re making. Some pots are ideal for cheese while others for hot oil or broth (Source).

In this section we’ll deep dive into their differences and similarities: 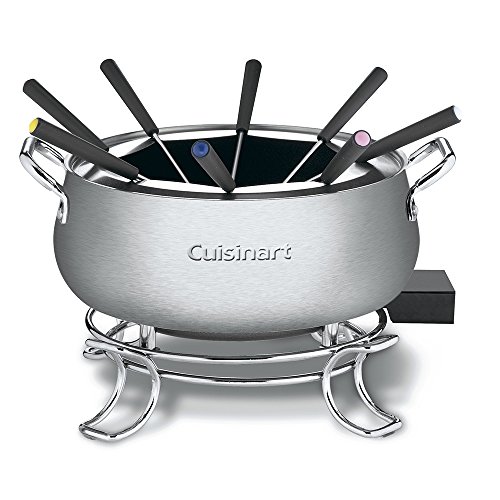 This electric fondue pot offered by Cuisinart is elegant, well-made, and suitable for chocolate, cheese, broth, and oil. Users love the nonstick interior, but some do note that the cord is short.

The Cuisinart electric fondue maker measures 6.12”x 10,5” x 7”, and it features a 3-quart stainless steel bowl, a temperature probe, eight fondue forks, and a fork rack. Another great thing about this pot is the removable temperature control, which you can adjust easily for different recipes. What’s more, this fondue maker is built to North American Electrical Standards, and it’s completely BPA free. It comes with 3-year warranty, and you can clean it in the dishwasher.

As a whole, buyers are very satisfied with the performance and quality of the CFO-3SS electric fondue maker, and they highly recommend it as the best fondue pot. A user comments that the fondue maker works far better than she expected and that it cleans like a charm.

The purchaser adds that it works well with cheese and chocolate. Another reviewer states that the pot heats and cools quickly and that it’s very well-made. A user also mentions that she has used the pot for several parties and she is in love with it. She warns that you might have to buy some extra forks, though.

However, some customers have noted that the temperature is difficult to control and that they had issues with the power cord. 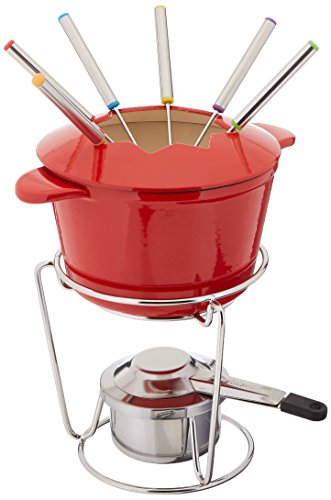 If you’re looking for a fondue pot for your next party, you can take a look at this red fondue set offered by Cuisinart. Users love the color, but some do note that it’s smaller than they expected.

The Cuisinart fondue pot measures 13.25” x 7” x 7.25”, and it features cast-iron construction and five color-coded forks, which is great because there will be no mix-ups. Another excellent thing about this product is that it’s dishwasher safe, and it’s suitable for any stovetop. The fondue set is available in red and white, and it’s induction ready.

In general, users praise the design and functionality of the Cuisinart 13-piece fondue set, and they don’t have any major complaints regarding its usefulness.

However, some customers have noted that the bowl is wobbly and that the enamel coating started to chip away quickly. A couple of users also warn that their pot arrived damaged. 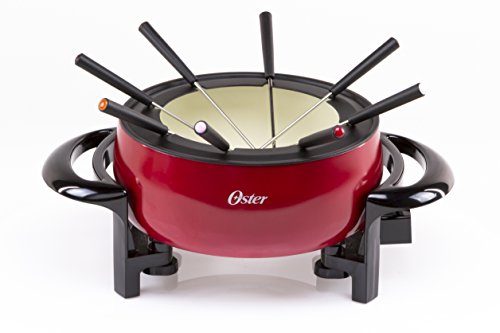 This fondue maker offered by Oster is unique, well-made, and easy to clean. Users love the non-stick coating, but some do note that they are not happy with the cord. The Oster fondue pot measures 5.5” x 13.4” x 8.7”, and it features titanium infused DuraCeramic coating, which last eight times longer than ordinary coating, and removable, adjustable temperature control for convenience.

What’s also great about this product is that it has a magnetic breakaway cord for safety and it’s PFOA and PTFE free. Furthermore, you get eight fondue forks in combination with a fork holder ring.

A customer comments that she has used the Oster ceramic fondue pot several times and that she is in love with it. She adds that the pot arrived quickly and in excellent condition.

Another purchaser mentions that the adjustable temperature setting works great and that the pot is perfect for cooking broth. She highly recommends it for parties. A buyer shares that this is one of the best ceramic fondue pots she has ever owned and that it cooks evenly. She states that the fondue maker cleans easily and that she doesn’t worry about scratching the Teflon when she cleans the pot. However, one customer has complained that the magnetic breakaway cord doesn’t stay in place. 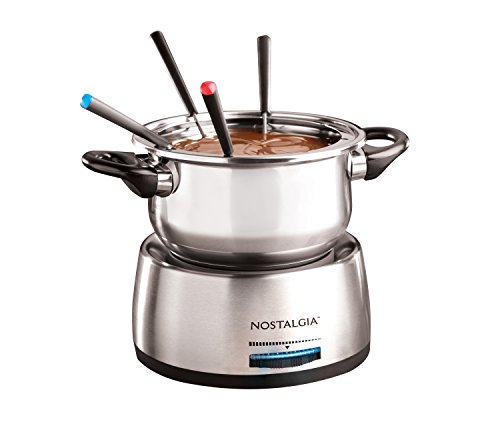 If you love fondue and you want to surprise your friends, this electric fondue pot offered by Nostalgia might be an excellent choice. Users love the quality of the pot, but some do note that it isn’t as easy to clean as they expected. The Nostalgia stainless steel fondue pot measures 8.66” x 8.66” x 8.27”, and it has a 1.4-liter capacity.

What’s more, the pot has a blue-lit adjustable temperature dial, cool-touch handles to avoid getting burnt, and six color-coded forks so that your guests can serve themselves. The fondue maker is suitable for chocolate, cheese, and sauce, and it comes with fondue support ring.

A buyer observes that the Nostalgia electric fondue pot works great with all kinds of sauces that usually burn in other fondue makers. She adds that the cord is long and that the pot heats up quickly and evenly. Another user mentions that the bowl keeps the fondue warm and that it’s perfect for chocolate and cheese. She highly recommends it as one of the bests affordable fondue pots. A purchaser shares that you can clean the pot easily with hot water and a sponge and that the color-coded forks are incredibly convenient.

However, some customers have noted that the fondue pot too small for their needs and that it’s hard to control the temperature. Some also warn that it’s easy to burn the chocolate and the cheese if you’re not careful. 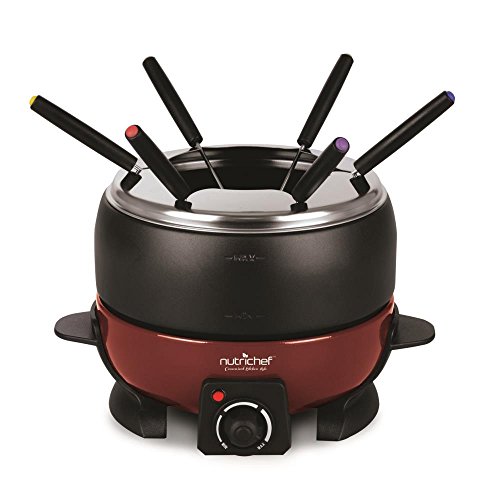 This electric fondue maker offered by NutriChef is well-design, countertop-safe, and an excellent addition to any kitchen. Users love the removable serving bowl, but some do note they received a used product.

The NurtiCheft fondue pot measures 8.9” x 10.1” x 6.6” with 2+ quarts cooking capacity, and it features a heated electric base for melting cheese chocolate, non-stick surface, power LED indicator light, and cool-touch handles to avoid burning accidents. Another great thing about the pot is that it has an adjustable temperature control so that you can control the cooking easily. Moreover, it comes with six color-coded fondue dipping forks for your guests.

A user comments that the NutriChef fondue maker is larger than she expected and that it works great. The only thing the buyer doesn’t like is that the cord is too short for her liking. Another reviewer mentions that the pot is easy to use and clean and that it melts cheese fast. She highly recommends it as one of the best electric fondue makers available.

A buyer also remarks that the temperature is easy to adjust and that the pot heats quickly and cooks everything evenly. However, some customers have complained that they received a defective unit and that they are disappointed with their purchase.

One Bon Appetit home chef who recently purchased one of these wondered whether they could combine different types of meat with coconut shrimp- and whether this conglomeration of ingredients would result in a bad-tasting dish.

Another member replied that they generally use oil fondue but it’s best to ask ahead about dietary restrictions, like gluten-intolerance, if you’re having a dinner party.

Another popular forum member wondered whether other Internet users have found creative foodstuffs to dip into cheese creations. One Reddit user responded that some of their more popular creations for dipping purposes come from restaurants and include cubed potatoes, steamed broccoli, apples, and sausages.

Other users said that, indeed, mushrooms are a tasty complement- they recommend letting them saturate in the hot cheese for a couple of minutes so that they heat up, making them even tastier. Other commenters wondered whether they should be raw or sautéed- the consensus seems to be that if you use raw mushrooms that you’ll find they get cooked in the cheese.

Responses really varied with one user saying that they enjoy having soft pretzels as a side complement while others nominated vegetables, bacon and grapes. Then the conversation shifted to the type of cheese that is used- one home cook said that gruyere is particularly delicious with it’s creamy and nutty flavor.

Indeed, while many thought that was a delicious style, others favored Taleggio, Limburger, Munster and different types of blue cheeses for their fondue pot. Another home cook came up with his own specialized list saying that they love pickling things and using them to dip. Their list includes such items as boiled potatoes, boiled eggs, boiled meat, tomato wedges, celery stocks, father beans and broccoli florets.

One business person says that their workplace invested in a fondue pot and found that it was a fun and delicious communal activity that lends itself to both chocolate and cheese.

Another thread featured a restaurant worker who worked as a waiter at the Melting Pot which is a fondue restaurant. They went into specifics about cheese delivery- saying that, generally, they work with large quantities of shredded cheese delivered in 20-pound cases- it’s mixed with cornstarch. This means there’s lots of food prep- with the tricky part being getting the flour or cornstarch consistency correct so that the melting process is high quality.

Yet another thread was sparked by a user wondering what the best recipe was to make a cheese creation. One of the more popular responses was submitted by a user who nominated the following recipe. The way it goes, you’ll use garlic to rub down the bowl, dissolve the cheese and some white wine and stir until it’s completely dissolved so that you can dip some bread in.

Instead of mixing in garlic, in which case you might get chunks of garlic in your mouth, by rubbing it down, the bowl gives off the taste of garlic without the unappealing mouthfuls of vegetable.

Finally, another user provided some common traditions and tips to get the most out of this kitchen appliance- they say that in the event that it is too hot you can always add a little bit more wine. If the consistency is too soft you add more cheese. Interestingly, there is some speculation that in ancient times if the food you were spearing falls off into the mix, if you are a man you have to buy the next round of drinks and if you’re a woman you have to kiss the man to your left.