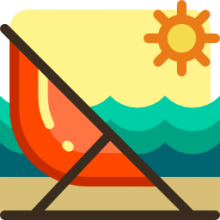 Portable hammocks fold up for easy transport and unfold for, hopefully, a comfortable and hassle-free rest without having to be strung up to trees (Source). They are similar to hammocks with stands, but are portable, with folding frames.

There is spirited debate online regarding which of these mobile, folding hammocks are actually worth the money.

Many buyers we interviewed report that their folding hammocks were structurally weak and poorly designed. The most egregious example being the Jumbl travel hammock, which multiple users report falling through!

When it comes to selecting a foldable hammock, there are some important buying criteria to pay attention to. 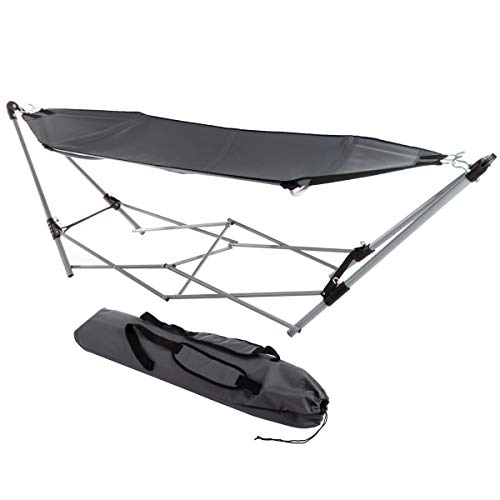 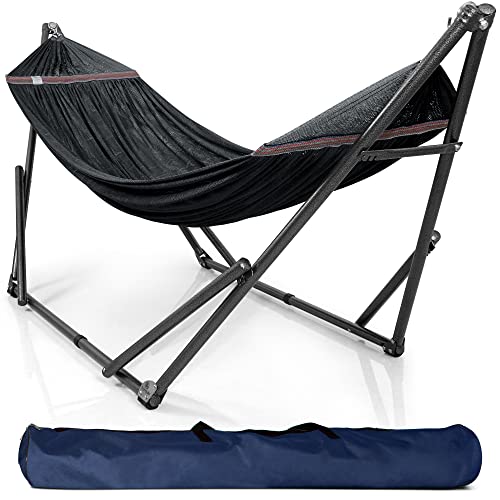 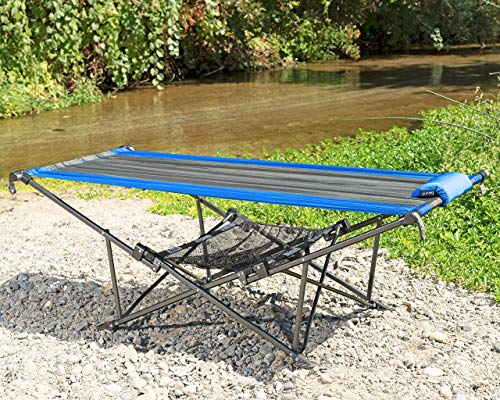 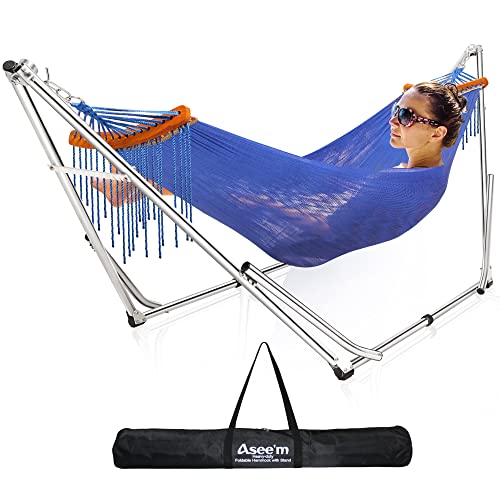 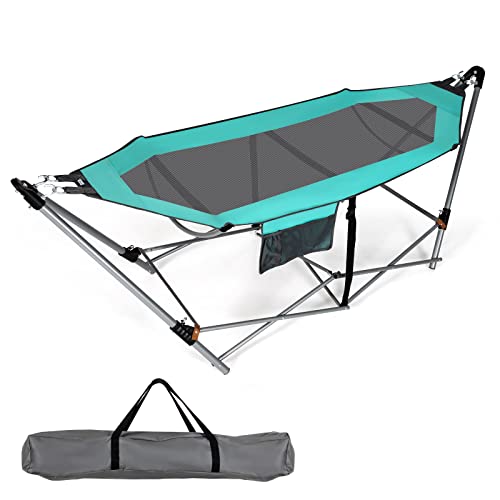 The Top 5 Collapsing Hammocks For 2022 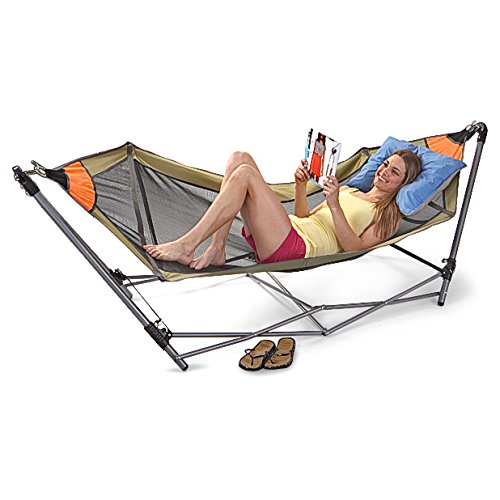 This outdoor hammock bed offered by Guide Gear is comfortable, well-supported and easy to set up. Users love the price and that it folds quickly, but some do note that the stitching is not durable.

This folding hammock stand measures 6” x 12” x 12” and it’s made of cotton jersey. It has an ultra- strong 8’-long steel frame, a mesh fabric bottom for improved air circulation and a weight capacity of 225 lbs. The hammock weighs 26.45 lbs and it comes with a backpack-style carrying bag. Overall, this is an excellent choice if you are looking for a cheap hanging bed.

A user comments that this foldable beach hammock swings just like a real one and that it feels sturdy and well-made. The reviewer also adds that the hammock is light and you can take it down for a couple of minutes. Another happy buyer mentions that he is over 6 feet tall and he uses this hammock stand bed without worrying about falling.

He would recommend it to anyone looking for an affordable indoor or outdoor (beach) hammock. A satisfied purchaser shares that he weight 240 lbs and the steel frame holds him without sagging.

However, some customers have complained that this hammock bed is too unreliable and unstable and that it could tear unexpectedly. Some users also complain that the hammock lasted only a couple of days and that it’s too uncomfortable to use. 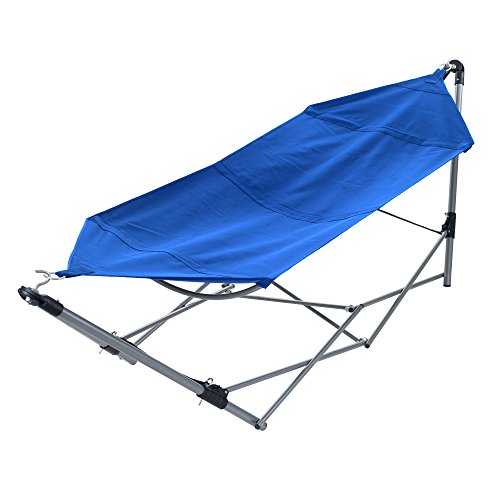 This blue portable hammock bed offered by Stalwart is convenient, foldable and perfect if you are going camping. Users love that it’s easy to set it up, but some do note that it’s poorly made.

This portable hammock bed measures 97.5″ x 31.5″ x 32.25″ when it’s flat and 7.5″ x 7.5″ x 44.5″ when it’s folded. It’s made of sturdy, comfortable canvas with an aluminum frame and you can assemble it quickly in three steps. The weight limit is 250 pounds, and the package also includes a carrying bag so that you can take it with you wherever you go. It’s also available in red and black.

In general, users have a mixed opinion of the Stalwart blue hammock frame, and they warn that it doesn’t swing very well. A buyer comments that he is 5feet tall and he fits comfortably in the hammock. The reviewer also adds that setting up and taking down the hammock frame takes only a couple of minutes.

Another user shares that the carrying bag is very useful and that she can easily fold the hammock inside. She highly recommends it to anyone looking for a portable hammock bed. On the other hand, some customers have complained that they don’t feel safe when they lay in the hanging bed. They say that it’s too unstable and they are afraid it would flip over.

Some users also note that the stitching is poor and that you shouldn’t expect the Stalwart hammock frame to last very long. 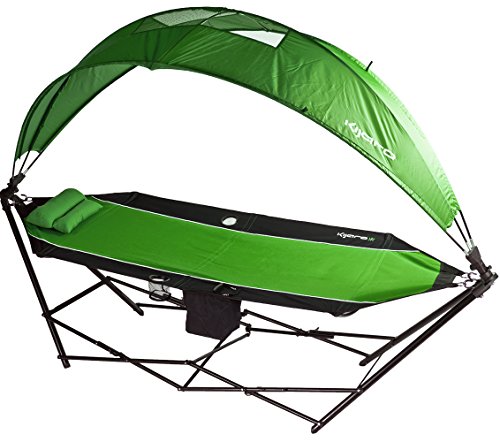 If you are searching for an outdoor hammock with a canopy, you might want to take a look at this hanging bed offered by Kijaro. Users love the extra features, but some do note that the canopy poles break quickly.

The all in one hammock measures 10 x 10 x 42 inches with a weight of 33 pounds and it’s made of 100 % polyester. It has an 180-degree rotating canopy that detaches, plus a cooler that holds up to 6 drinks, two mesh cup holders, a magazine holder and a backpack carrying bag with wheels.

Overall, buyers are pleased with the stability, durability, and size of the Kijaro traveling hammock. A user shares that this swinging bed is big enough for two people and that it’s sturdy, well-made and easy to set up. The reviewer also adds that he is six ft tall and he feels cozy when he is lying in it.

Another happy customer mentions that the shoulder straps of the carrying bag are padded and that he had no problems to put the hammock in his backyard.

He would recommend it to anyone who wants an outdoor hammock bed.  A purchaser states that she has this canopy bed for a year and it’s still in good condition. However, some customers have complained that this hanging bed is heavier than they anticipated and that it doesn’t swing back and forth. Some users also note that the quality of the material is poor and that it’s hard to set it up and fold it down. 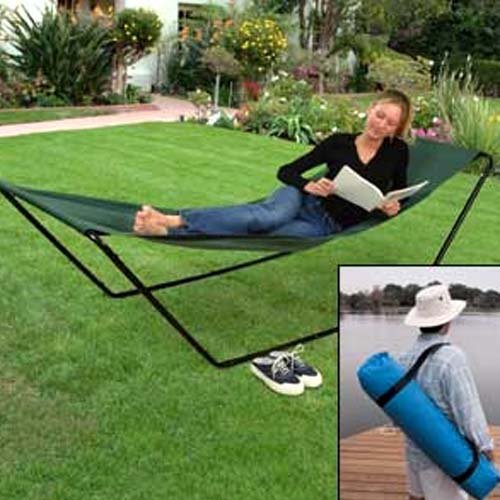 This foldable hammock bed with a stand offered by Jumbl is light, comfortable and easy to transport. Users love the quick assembly process, but some do note that it doesn’t swing as a traditional hammock.

This folding hammock bed measures 33 x 28 x 85 inches and it has a sturdy steel frame, and PVD backed polyester sling which is soft and water resistant. You can store it in its carrying case with shoulder harness and take it to the beach, the park or your backyard. The weight capacity is 220 lbs.

In general, users have a mixed opinion regarding this portable hanging hammock. A satisfied buyer shares this hammock bed is huge and two people can fit inside easily. The reviewer also mentions that it’s perfect for lounging outside in the sun. Another purchaser shares that this is the best camping hammock and that it takes a couple of minutes to put it together.

A user also adds that it’s easy to get in and out of the hammock and he feels safe and comfortable in it.  However, some customers have complained that this hammock bed is dangerous to use because the fabric tears quickly and you can fall through it. Some also note that this hanging bed is it’s heavier than they anticipated and that it’s difficult to stretch the hammock and snap the bars.

This foldable hammock is a comfortable, sturdy, collapsible option that is reasonably priced. It employs a handy mesh storage cradle beneath the hammock. It ships with a carrying bag and has a robust weight capacity of 225 lbs.

Buyers we spoke to told us that it didn't require any assembly, and its frame easily unfolds and folds back up. The frame is sturdily built from welded metal finished with a glossy paint. Users transport it to the beach, camping grounds, or install it in their backyards.

Let's take a look at 5 of the best-selling travel hammocks on the market and see how they compare.

If you want a touch of the tropical in your backyard, you might take a look at this portable hammock bed offered by Fold and Go. Users love the comfortable surface, but some do note that it doesn’t look like the provided picture.

This folding travel hammock measures 6.9” x 12” x 54” and it has an improved steel frame for durability, a mesh cradle for storing blankets or pillow, a weight of 29.4 pounds, and a capacity of 225 lbs. The hammock has a striped pattern, but be aware that the colors may vary. The package also includes a matching carrying bag.

As a whole, users are extremely satisfied with the design and construction of this travel hammock. A buyer comments that this swinging bed arrived quickly and that she didn’t have any problems to set it up. The reviewer also states that it’s a perfect gift for Father’s day.

A happy user shares that this is ideal for afternoon naps and he highly recommends it. Another customer adds that this hammock folds as quickly as a folding chair and that it’s made of high-quality material that won’t tear. He also states that the frame is solid and doesn’t bend. However, one customer has complained that the mesh is loose and that it’s hard to fold it back in the carrying bag.

The user also states that the bag arrived with a hole in it.

What Are Hammock Buyers Saying?

Some of our favorite picks are listed below- unfortunately some of them have gone out of stock. Use the comparison table at the top of the page for our current picks.

The first portable folding hammock with a carry bag we looked at was the Guide Gear collapsing hammock.

The next folding hammock was the Stalwart Hammock. Stalwart says you don't need a tree and that you can install this mobile hammock with minimal assembly or setup.

The All in One Hammock by Kijaro was another portable folding hammock with carry bag we examined.

The fourth portable hammock we took a look at is billed as the best hammock for backyard camping. The manufacturers, Jumbl, say that this PVC-style, polyester a sling hammock is a portable option that is water resistant and can easily be toted around using its convenient shoulder harness and carry bag.

The Fold and Go

The last option we examined was the Fold and Go travel hammock- it has a weight capacity of 225 pounds, folds up like a chair, and even includes a storage area beneath the sling itself in the style of a mess cradle that is an ideal place to store pillows, blankets and reading material.