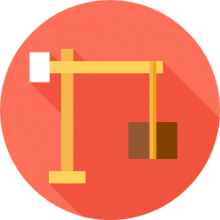 It uses an electric motor that powers a spool or steel drum, winding steel or synthetic cable wire that is attached to a steel hook on the cable's leading end.

Whether you are hauling a vehicle out of the mud, or using it to hook up a vehicle to a trailer, there are a variety of different electric trailer winches on the market today.

One of our favorites is the Smittybilt 97495 XRC winch- it has a 9,500 lb. load capacity, a 6.6 amphibious motor, and features a waterproof IP67 rating along with a lifetime mechanical warranty.

This is a particularly rugged and heavy-duty winch- and users say that it is very powerful, but because it is geared down it winds very fast. 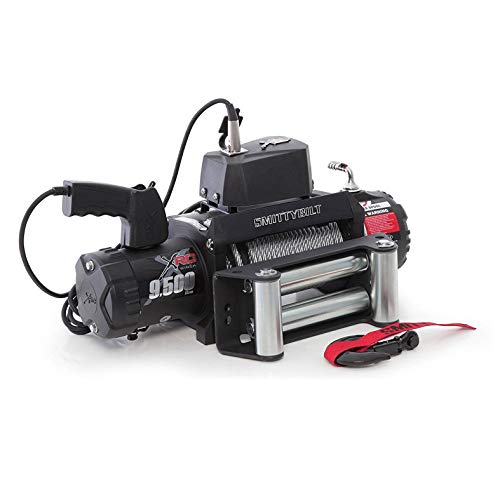 One satisfied buyer says that he was able to winch a 4,500 lb. Dodge Durango, easily skidding the back tires across concrete, and he says that with the additional snatch block he was using he was able to double this pulling power.

Another buyer outfitted this winch to his Ford Explorer and says he was stunned at the pulling power- he was able to attach the winch to a Dodge Charger that was stuck down a ravine and pull it out with ease.

Let's take a look at five of the best-selling electric-powered winches on the market today and see how they compare. 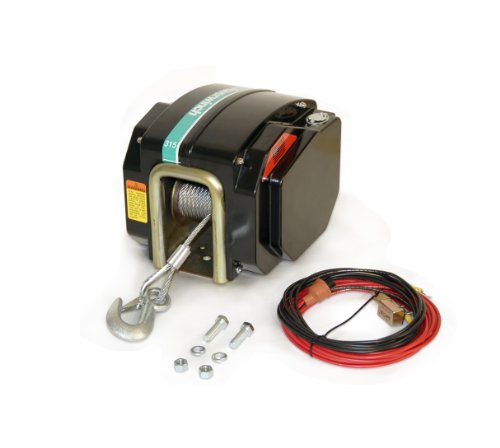 The 22 lb, 10” x 8” x 10” Powerwinch 315 Trailer Winch is a decent option that can pull boats of up to 4,000 lbs and has a vertical lift capacity of 1,650 lbs. Its users like that it retrieves quite well and at safe speeds, but also note that the cable may not always release easily.

This 12 V electric cable winch features smooth power-in/freewheel out action. It has a 20-ft cable (7/32 in diameter) and can reel in at a quick line speed of 15 feet per minute. Included with the unit is a 30 amp standard wiring harness that connects easily to your vehicle’s battery.

It has a simple self-loading design and comes with a switch and a 25-foot lanyard cord. The product is backed by a 1-year warranty. This trailer winch is a good option if you are looking for a small-sized and lightweight electric winch designed for mid-sized boats and vehicles.

This product received mixed reviews from users. Many users like that it works for its intended purpose of winching boats at a speed that is considered safe.

One user says that it pulled his 18’ 1000 lb flat boat on his dry load trailer with no problem. However, others are not pleased that the cable sometimes does not release properly. A dissatisfied user says that the clutch mechanism slips out and will not re-engage until the cable is pulled all the way out and manually fit back in. It also does not have a remote control option. 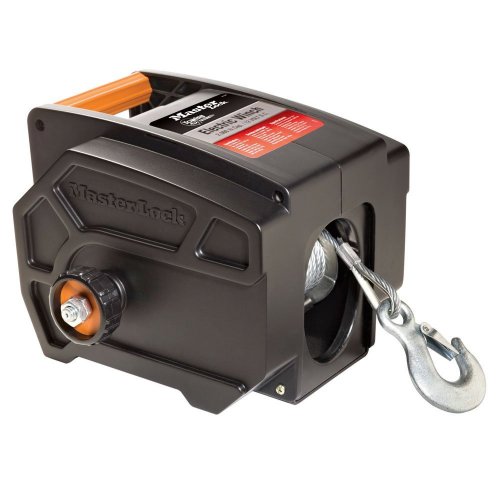 The 25.4 lb, 14” x 12” x 10” Master Lock 2953AT Portable Winch is an economical option that features an automatic shut down mechanism if overloaded. Its users love that it is quite powerful despite being lightweight, but also note that backing up/release is not power controlled. This 12 V DC-powered winch has a toggle remote control.

A parallel-shaft gear supplies enough power for rolling vehicles up to 6,000 lbs, pulling through water up to 5,000 lbs, or dragging items up to 2,000 pounds. A back-up hand crank, power battery cables, and safety hook are included with the unit. It can be temporarily mounted to a ball mount, or attached to a flat surface.

The winch is equipped with a 20-foot cable and pulls at 6 feet per minute.  It comes with a 1-year warranty. This electric trailer winch is a solid option if you are looking for a portable winch that is perfect for infrequent light duty winching.

This portable winch is generally found satisfactory by its users. The low price coupled with plenty of pulling power makes it a very good choice for many people.

Users think that the removable feature is great and it’s light enough for you to put it on and off as you please. Some users find a number of flaws in it though, such as the slow line speed, short battery cables, short controller cables, and the lack of power-out capability. 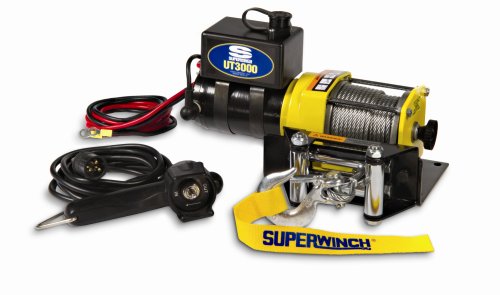 The 19.6 lb, 12” x 7.5” x 7” Superwinch 1331200 UT3000 is an effective option with a  bi-directional dynamic braking to minimize the possibility of winch rope slippage in the event of power failure. Its users love that it gives a lot of power for its small package, but also note that it moves slow under load.

It has a rubber handheld remote with 12′ cord. Its 1.2 HP motor has a 3,000 lb pull rating, and powers in and out the 40’ long 3/16” diameter wire rope. Gear train has pull and turn free-spooling clutch. Safety features also include weather-sealed solenoid and circuit breaker protection.

It has a removable clevis pinned with a latched hook with rope thimble, and comes with a standard 4-way roller fairlead that attaches to the included mounting plate. A 1-year warranty backs the product. This electric winch is a very good option if you are looking for a portable and low-priced trailer winch that does the job well.

Users of this electric trailer winch are overall happy with the product. For many, it may not be the fanciest winch, but it can’t be beat for the money. One satisfied user says that it is powerful enough to pull a car with 4 flat tires onto a hauler.

There are some users who find that the line moves too slowly when under load, that the motor struggles especially on a hot day, and that the freespool sometimes gets stuck, but there are workarounds for these and are deemed acceptable for the low price of the product.

The 78 lb, 20.88″ x 6.3″ x 7.4″ Smittybilt 97495 XRC Winch is a well-designed option that has a 6.6 HP amphibious motor that can power in and out. Its users like it is very powerful and winds in fast, but also note that sometimes it’s hard to switch the clutch from free spool back to engaged.

Its line pull is rated at 9,500 lbs, and it comes with a 4-way roller fairlead and a corded remote control with a magnet for attachment. The state-of-the-art 500 amp solenoid is completely waterproof (waterproofing is IP67 rated). The cable is 94’ long and has a 5/16” diameter. This product is backed by a lifetime mechanical warranty and a 5-year electrical warranty.

This trailer winch is an excellent option if you are looking for a durable and high-performance electric winch.

The overall consensus among users of this winch is that it is very well-designed and it works great. One user is able to winch his 4500 pound Dodge Durango and skid the back tires on concrete with ease.

The waterproof build is a feature that users are very happy about. Many users also find the magnet in the control handle as well as the included roller fairlead as nice touches. 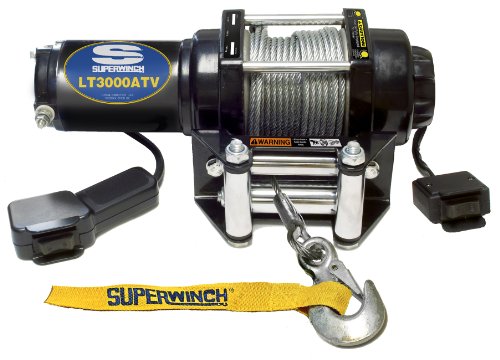 The 19.8 lb, 13.2” x 4.2” x 4.2” Superwinch 1130220 LT3000ATV is an excellent option that has mechanical and dynamic braking with 100% automatic load holding. Its users enjoy its quiet motor that works very well, but also note that the switches feel cheaply made. It has a rated line pull of 3,000 lbs, and comes with a roller fairlead and mounting plate.

This winch is constructed with a 1.2 HP, low amperage permanent magnet motor protected by a circuit breaker. A handlebar mounted rocker switch and handheld remote with 12’ lead are included. The durable 3/16″ wire rope is 50’ long. The product comes with a 2-year mechanical warranty and 1-year electrical warranty.

This remote-controlled winch is a very good option if you are looking for a compact, quiet, all-purpose trailer winch.

Most users of this Superwinch model agree that it works very nicely and quietly. They like the good quality and value they are getting for the product.

One user particularly loved the user-friendliness of the mechanical brake, and a number of others enjoyed the ease of installment. However, some users find that the cables are weak and can fray easier than expected.

If you are in the market for an electric trailer winch, many buyers search them out at Home Depot, Lowes, Target as well as Walmart. These electric winches have a variety of uses- many buyers use them in conjunction with all-terrain vehicles, helping them to escape from being stuck in mud. Other winches are used in conjunction with motorboats, tractors, lawnmowers and cars.

Trailer Winches are generally attached to trailers to pull a vessel, vehicle, or riding lawnmower, etc. onto your trailer transport bed. Because these heavy cargo loads being drawn will often have wheels, the cargo is regarded as a "rolling load". Rolling loads tend to be less difficult on the winch, permitting the winch to drag above its graded line pull capacity. We advise matching the winch rating to the weight of the cargo's rolling load.

When shopping for an electric winch, many users oftentimes purchase different accessories depending on what they're looking to do- these can include recovery straps, roller fairleads, tow hooks, tow straps, wire rope, bow shackles as well as pulley snatch blocks. The Smittybilt winch is one of our top picks, as we have previously examined, with many users testifying to its strengths and durability.

One buyer who installed it on his four-door Jeep says that it seamlessly installed on his bumper. Other users say that sometimes it takes a little bit of elbow grease to mounted on the bumper- one buyer saying that he had to buy a plate and perform some drilling, painting as well as welding to get it up and running.

How To Install The Superwinch On A Durango

To test the connection, once he had it sufficiently installed on his Jeep bumper, he hooked it to a tree using a tree strap, locked the brakes, and used the winch to pull his vehicle up a steep hill. Another buyer who does a lot of off-road driving through mud and boggy sand says that with this winch he's been able to extract all different types of vehicles out of sand, mud and snow.

Additionally, he can testify to the quality waterproofing of this electric trailer winch, saying that he has driven through deep and muddy areas that bring muddy water up to the door handles of his vehicle and the winch remains completely operational.

Another winch we like is the Superwinch 1130220- its users say that this is an especially powerful winch that doesn't take up any more space than it's less- powerful competitors, providing you true pulling strength for a relatively low price.

One buyer who hooked it up to his truck says that it took about 3 1/2 hours for it to be fully mounted, with all the wiring and custom calibration required, though he says that he did have to purchase some extra bolts from Lowes because the included bolts were about an inch too short.

Interestingly, some of these winches advertise themselves as portable hoisting tools- giving you the option of permanently mounting it on to your vehicle using a two-bolt mounting plate or leaving it as a handy accessory that you can use as needed.