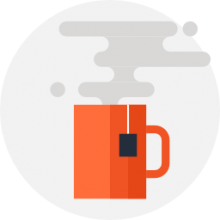 Adaptive drinking cups can help keep a loved one with a debilitating health problem, or someone who is simply weak with age, properly hydrated (EasierLiving).

There are some different styles and designs to these adaptive drinking cups.

Some have snorkel lids, some have weighted bases with wide-grip handles, and some include vents that help control the flow of liquid from the cup to the mouth.

The 2 types of adaptive drinking cups we looked at are:

Dysphagia cups are a style of adapted drinking cups that are designed for individuals who have problems swallowing safely (Source). Ideally, they will control the amount of liquids reaching the mouth at a time.

They will also prevent its users from having to lean their head and neck back to take a sip. Since this is such an important decision, make sure to watch the (toggled) video below to ensure you understand how to deal with dysphagia.

Weighted base cups like the AliMed don't have lids, but their wide grips, and weighted bottoms are ideal for people with hand tremors, who aren't at risk for aspirating.

There is some gray area here. If aspiration is an issue, it's best to buy a dysphagia cup to help regulate liquid intake. Be exceedingly careful when you begin using your dysphagia cup to be sure it's safe and effective for you or your loved one.

If you're looking for a pure convalescent cup for someone who is recuperating with limited mobility, (i.e. prone in bed) the AbleWare Cup is a good option.

The AbleWare Cup promises a dribble-free drinking experience. Great for individuals who can't sit up or raise their heads, have decreased grip strength, suffer from wrist pain, have hand deformities and tremors. A great convalescent cup, letting users take a drink without sitting up.

The AliMed Cup: has a weighted base, wide-grip handle, but no lid. Its oval-shape will direct the flow of liquid and is indicated for users who suffer from tremors to enable them to self-drink. The noise-clearance design helps to prevent potentially dangerous head tilting. A weighted-based cup for individuals who can't tilt their heads, have grip weakness, and/or tremors- it doesn't have a lid, so isn't so much a dysphagia cup since it doesn't regulate fluid intake.

The Provale Cup: will provide a fixed amount of liquid with every drinking motion. (either 5cc or 10cc boluses), but some users say it is too bulky and can cause aspiration because its design encourages leaning the head too far back during use.

The Five Best Dysphagia Cups For 2023 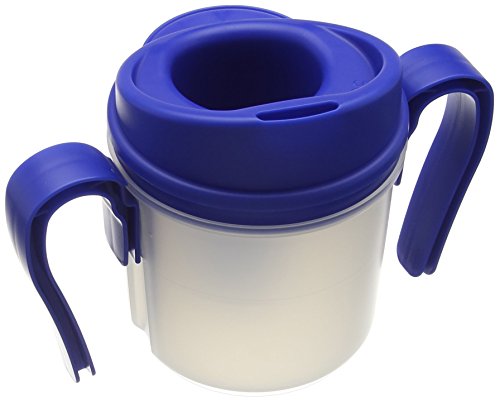 This dysphagia cup offered by Rolyn Prest is practical for people that have issues swallowing, but it’s not very suitable for thick liquids. Users love that it reduces choking incidents, but some do note that the cup is harder to use than they expected.

This blue provable cup has a broad base to minimize spilling and tipping, two removable handles, and it delivers a fixed amount of liquid with every slip – 5 cc. The cup is also easy to clean, and you can even toss in the dishwater. The Rolyn cup is also offered in 10 cc model.

As a whole, users have a mixed opinion regarding the Royal provable cup, and they agree that it should have been designed better. A happy buyer mentions that his mother can control the amount of liquid she gets thanks to this dysphagia cup.

He also adds that it keeps her from aspiration. Another satisfied customer comments that his 94-year-old mother used the provable cup without any problems and that it’s easy to take the mug apart and clean it. But he doesn’t recommend using a dishwasher since it could damage the lid.

However, some customers have complained that the cup requires too much tilting and that the two handles are not comfortable to use. Some also note that the cup leaks, the top breaks and that it doesn’t hold too much liquid.

2. The AliMed Weighted Base Cup Review 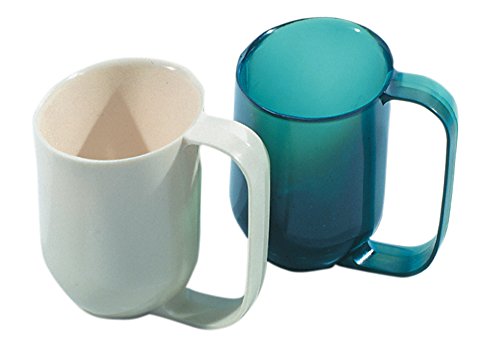 If you are searching for a well-made dysphagia cup, you might take a look at this mug offered by AliMed. Users love the shape of the cup, but some do note that it’s overpriced.

This dysphagia cup has a weighted base that slows tremors to promote self-drinking, a wide handle, and an oval shape that directs the flow of the liquids. The dysphagia mug also has a nose clearance that would allow you to drink without tilting your head. The capacity of the mug is 8 ounces, and you can clean it in the dishwasher. It’s available in two colors – almond and green.

Overall, users have a favorable opinion of the AliMed dysphagia mug, and they praise its functionality and design. A happy buyer mentions that the cup is perfect for shaky hands due to its weighted base and that it’s a lifesaver. The reviewer also adds that the mug is excellent both for cold and hold liquids and that it’s easy to wash and store it. A purchaser also shares that the weighted cup arrived quickly and that his dad who has ALS finds it very useful.

He adds that the shape of the mug really reduces spilling and that he highly recommends it. However, some customers have complained that the cup broke quickly and that the quality is not what they expected. A user also states that the weighted mug didn’t work for him and that he had to return it.

This transparent feeding mug offered by Maddak is easy to use, well-designed and dishwasher safe. Users love the practical design, but some do note that the lid is not as tight as it should.  This convalescent dysphagia cup has a special design to reduce the amount of spilled liquid, and the mouthpiece is large enough to fit a straw.

It allows you to drink dribble-free without sitting or raising your head. There are three levels at 4, 6, and 8 oz, and you can control the liquid intake. Overall, this is an excellent choice if you’re searching for a cheap dysphagia cup.

In general, users are pleased with the functionality and durability of the Maddak transparent feeding cup. A buyer shares that it’s easy to drink without spilling or tipping the mug. The reviewer also adds that he likes the look of the dysphagia cup and that his dad is not embarrassed to use it. Another happy purchaser mentions that the spout hole is large enough for a plastic straw and that it’s easy to regulate the flow.

The user also adds that the lid stays in place even if you knock the cup down. However, some customers have complained that you have to hold a finger over the hole to control the flow of the liquid and that it’s not suitable for elderly people. A user also notes that the edges of the mug are sharp and you could cut yourself.

If you are looking for a high-quality dysphagia drinking cup, you might consider this wedge mug offered by Kinsman. Users love that it works with thickened liquids, but some do note that it’s overpriced and poorly made. This dysphagia wedge cup has an adjustable flow control on the lid with four setting allowing you to drink at your own pace.

It features a one-piece lid, a drinking spout, and it’s easy to assemble and disassemble it. The wedge mug is also dishwasher safe, and it’s made in the USA.

A buyer shares that the Kinsman dysphagia cup is perfect for honey-thick liquids and that it’s worth its price. The reviewer also comments that this regulating drink cup enables him to drink by himself and he doesn’t have to rely on other people. Another happy user mentions that the wedge mug was delivered fast and in perfect condition.

The purchaser also states that it works wonderfully for him and that he would gladly recommend it to anyone looking for the best dysphagia cup. A user also adds that the cup is ideal for his elderly mother and that he has bought three of them. However, some customers have complained that the wedge cup is fragile and that the lid shrinks in the dishwasher.

Some also note that it’s too difficult to drink from the mug and that it didn’t work well for them. Consider buying an adult bib to help keep spills from being too disastrous!

This transparent cup with snorkel lid offered by Rolyn Prest is uniquely designed, well-made and safe to use. Users love the price and the shape of the mug, but some do note that it’s plastic. This dysphagia cup is made of polypropylene, and it has a snorkel lid that allows you to regulate the flow of the liquids.

It has the capacity for 8 oz of liquids, and it’s safe to wash it in the dishwasher up to 180 °F. The mug is also BPA, phthalates, latex free and it’s an excellent choice if you need help drinking.

A buyer comments that he is very impressed with the quality of the Rolyn clear cup and that he highly recommends it. The reviewer also states that it helped his mother to regain independence and that the cup is easy to use.

A user also mentions that he has no troubles to regulate the flow and that it’s easy to drink from the cup. However, some customers note that you have to cover the hole to suck the liquid out and that it might not be very suitable for people that lack the strength to do that.

The first dysphagia cup we examined was the Provale convalescent drinking cup. Its manufacturers say that its broad base is designed to decrease the chances of spilling and tipping, and its dual handles provide for a more secure drinking experience.

The second dysphagia cup we examined was the AliMed weighted base cup. AliMed says that there weighted bass cups help individuals control their own drinking and that the oval shape is designed to safely direct the outflow of liquid into the mouth.

The Ableware Flo-Trol convalescent feeding cup was the third option we looked at. Its manufacturers say that it is able to control users liquid intake, providing dribble-free drinking experience that doesn't require the elderly or convalescent to raise their head or sit up.

The Kinsman wedge cup was the fourth convalescent cup we examined and Kinsman says that it is specifically indicated to be used by individuals suffering from a progressive neurogenic disease as well as for general dysphagia.

The last option we took a look at was the Rolyn Prest snorkel lidded cup.