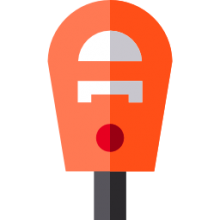 They are portable and durable handheld devices ideal for measuring wind-speed as well as wind chill and are frequently used by hunters, hiking enthusiasts, model plane pilots and other individuals enjoying the outdoors.

The LCD displays are pleaded dynamic, allowing you to easily toggle between different views as well as units of measure that include miles per hour, kilometers per hour, knots, feet per minute etc.

Our Top Pick: The Extech Anemometer 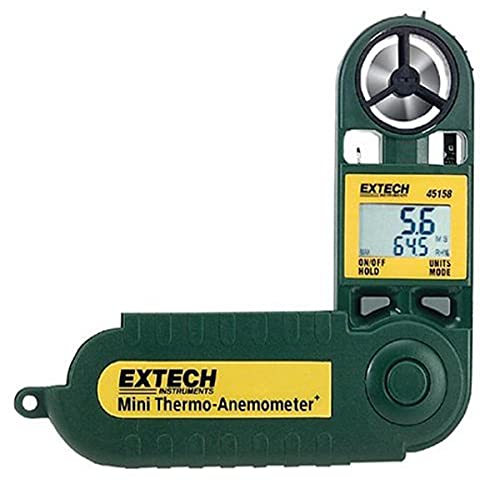 This pocket-sized meter includes a flip style case which functions as an extension handle.

It also helps to safe-guard it during storage. It will use a dual display to show air velocity and either relative humidity, dew point or temperature.

The measuring range is 100 to 5,500 feet/min. You can select your readings to display in feet/min, meters/second, kM/hour, MPH or knots.

While not fully water-proof, the manufacturers say that it is water resistant.

Take a look at five of the best-reviewed anemometers available on the market today and see how they compare. 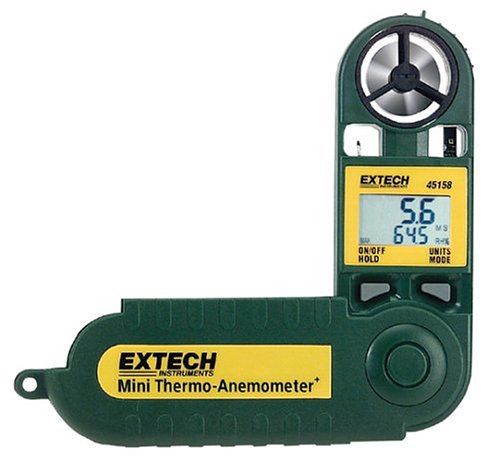 Our favorite anemometer is the 4.8 oz, Extech 45158. It is powered by one included lithium metal battery, and ships with a tripod mount as well as a lanyard.

Users like that it is a highly practical device- designed for real-world applications. It effectively measures humidity, temperature and wind speed, with some users using them for ventilation systems and others to assess their chicken broilers on their farmyards.

While the instructions are not ideal, and one user in particular was not quite satisfied with the speed of response to wind changes, most people found the Extech anemometer to be effective for measuring windspeed as well as measuring humidity, dew points and temperatures on it's small but usable LCD screen.

How is wind speed calculated?

Buyers of the HoldPeak HP-866B Portable Digital Anemometer have found the device to be very accurate when it comes to measuring wind speeds. The device is also quite dependable for measuring temperature in different units. Some say that the device is quite larger than other similar products that are available; however, this specific device offers more accuracy regardless of its larger size. A buyer has also praised the device for being quite multi-purpose and providing the user with all weather conditions.

The HoldPeak HP-866B also comes with a very useful carry bag and a wrist strap. It is very easy to carry the device around because of the bag that comes along with it. A lot of users who also happen to be shooters, model plane pilots, hikers, and love the outdoors have praised the device for providing them with the weather information they require when they go out. Users have also complimented the various features the device has. It is considered as one of the best devices to own for measuring weather.The device is portable, compact, and has a versatile LCD display. The display enables users to switch between wind speed units of the measure for various wind speed.

Users can also gain information about wind flow, humidity, and temperature. Some users of the device have shared their annoyance with the unit not working right out of the box. Users have had to remove the plastic from the batteries in order for the device to work properly.

Regardless of these complaints the majority of the users felt that the device is quite good and works fine. They also praise it for being a good product for its price.

Buyers of the OriGlam High Sensitive LCD Display Digital Anemometer recommend the device because it is easy to use and the design is quite comfortable.

The device has a solid feel and is not uncomfortable to hold. It also doesn’t come across as a device that can be considered as being cheap or lightweight. The design of the device makes it obvious that it a good product. A protective guard covers the propeller section from both sides.

The buttons are minimal and that makes operating the device very easy for the people who use it. Users can easily shift between the various units used for wind speed and temperature through the device.

In order for the device to deliver the best readings the propeller has to face perpendicular to the flow of the wind. Some users have also complained about the small letters that the device displays being hard to read. Other than that the numbers are quite big in font and easy to understand.

The Pyle PMA90 Digital Anemometer is a device that a lot of buyers don’t feel happy with.

Buyers have voiced complaints such as the device not having an access hole for the fingertip in the battery compartment lid. This makes it difficult when buyers want to open the battery door.

One user had to smack the device against his hand in order for the door to open. Users have also talked about the hassle related to switching between the Fahrenheit and Celsius temperature units for the device. The switch to make a change in temperature units is present underneath the battery.

One user also recommends not buying the device because it only worked for an hour for him.

Buyers of the Extech 45158 Waterproof Thermo Anemometer say that they found the device to be quite useful. They recommend it on the basis of the device being very accurate in its readings.

One user also shared her story about how she and her husband raise chickens in a broiler farm. They use this device in order to correctly measure the temperature and humidity.

For her, the price of the device was worth it and she couldn’t be happier with it. She described the device as a necessity for all poultry owners.

The device being waterproof also adds to its functionality and usefulness. Users also found the device to be very easy to use and the instructions quick to follow.

Users of the Ambient Weather WM-2 Handheld Meter love the device for being very easy to carry around and hold. Due to its small size the device can be easily placed inside a pocket of a shirt or a pair of jeans for transport reasons.

One user even went on to say that he doesn’t even notice that he is carrying the device in his pocket because of it being so small and lightweight. The same user also shared a story about how the device was still able to work after being allowed to dry while disassembled after it was soaked unintentionally.

The controls of the device are very easy to use and the instructions are clear regarding how the device should be handled in order to get the readings that a person wants. The backlight screen featured in the device has been considered as an added bonus by a lot of the users.

Buyers of Ambient Weather WM-2 also like the device because it is able to tell the wind speed regardless of the direction you hold the device in. There are anemometers that can only precisely tell wind speed if they are held in a specific direction.

However, this device is capable of providing precise readings without users having to remember the direction it should be held in. The readings offered by the device can be displayed in different formats depending on what the user requires. While the device has numerous pros a few buyers have said that the battery life isn’t long, and for some the device used up all the battery power in about an hour.

If you are looking to purchase a handheld wind speed weather meter, read our reviews above. It's likely that you are a hiker, kite surfer, or somebody who enjoys paddle sports, sailing, yachting or even scuba and skydiving.

These types of outdoor activities frequently require handheld digital anemometers to measure air velocity, relative humidity and a range of other outdoor weather variables, all in one rugged and compact instrument.

An underutilized way of assessing whether one of these thermo anemometers is right for you is to read the product pages and check out what other consumers have said after they have purchased a unit.