In this post, we examine five best-selling croquet sets.

A croquet set consists of all the items needed to play the game of croquet. The best croquet sets are usually made of high quality wood and come with 6 mallets, balls, hoops (wickets) and goal stakes.

Some sets come with carrying bag and a stand that can be used for storage or display.

Croquet is a game played by two, four or six players; the object of the game is to hit your ball through all of the six hoops in the proper order and then hitting the center peg, which is the goal.

How To Play Croquet (Video Guide)

Historians believe the game was played as early as 1856 and has been a staple of backyard picnics and barbecues ever since. A good croquet set will be durable and designed to last a lifetime with proper care (Source)

Most buyers suggest paying a little more for a deluxe croquet set because they tend to be more durable. Also, while many croquet sets come with a carrying bag, buyers say these bags are often made from thin nylon that rips easily, and requires the disassembling of the mallets in order to get them to fit in the bag (Source).

If you can afford it, one idea is to look for a handcrafted set, such as an Amish handcrafted set. They tend to be higher quality and more durable than mass produced sets (Source).

Of the 5 croquet sets we looked at, the only one that offered more than one buying option was the Franklin Sports 6 player croquet set. This set comes in 4 varieties: Intermediate, Classic, Expert and Vintage.

As one can imagine, each is a step up in quality and features with the vintage being the top and the intermediate being the entry level set. Buyers tended to be very satisfied with the intermediate set, saying it’s a solid set for the money. As with all the sets we looked at, however, they found the carrying bag to be the weakest link.

The Crown Sporting Goods 6 Player Deluxe Croquet Set is a relatively good value for the price. Buyers say sometimes the mallets come apart and the carrying bag leaves a lot to be desired.

Next up is the Baden Deluxe which is good for casual gaming and a decent entry level set if you’re new to the sport. As with other sets, it comes with carry bag but requires you to unscrew mallet heads to fit.

The Trademark Global Croquet set looks to be a good set for beginners, and a decent value for the money, but because of the cheaper materials, it’s likely not going to last more than a season or two.

Finally we have the Hathaway 6 player croquet set, which is a good set for introducing children to the game. Mallets are smaller than traditional sets and the wood is lightweight making it ideal for kids. Comes with a carrying bag and everything needed for the game.

If you’re looking for a top-rated croquet set, you might want to consider the Crown Sporting Goods deluxe croquet set. Users love the construction of this croquet set, but some do complain about it being cheaply made.

It can also be a great gift idea. This item might be a good choice if you want to enjoy a fun, relaxing game with your family or friends.

In general, buyers have a favorable opinion of the Crown Sporting Goods 6-player croquet set. They agree that it is well-made and not just a kiddie toy. Users appreciate fine materials that the set is made of (balls are made of solid wood).

However, some complain that the set is cheaply built. Another complaint is that the mallets tend to go apart. 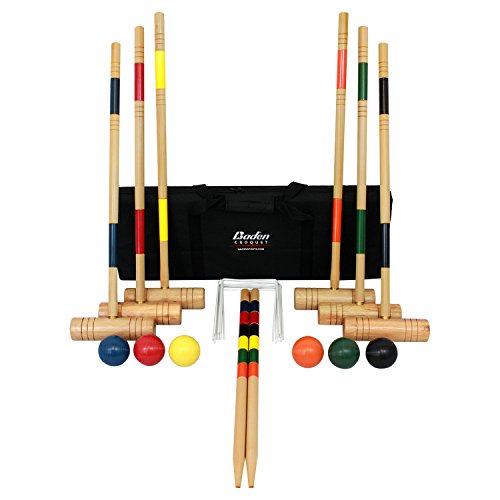 If you are looking for a croquet set, you might want to consider the Baden croquet set. Users like the sturdiness of this croquet set, but some complain that your lawn needs to be perfectly level.

This set includes 6 hardwood mallets, 6 brightly colored poly-resin balls, 9 steel wickets, 2 hardwood end posts, and instructions – everything you need for 2 to 6 players. It comes with a durable nylon carrying bag which, it’s said, allows for easy storage and transportation.

This item could be a solid choice if you’re looking for a portable croquet set for leisurely afternoons at the park or in your backyard.

In general, users state that the Baden deluxe croquet set meets their expectations. They agree that this item is sturdy, well-made and good for casual gaming.

However, there are some who complain that unless you have a perfectly level lawn and cut your grass really short, it is impossible to play with this set. One user complains that the bag fabric is too lightweight. 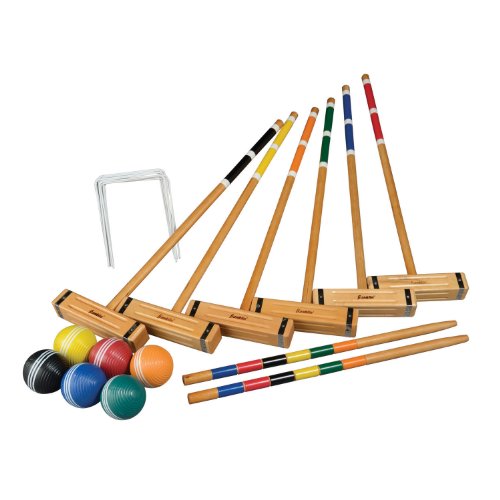 The Franklin Sports 6-player croquet set could be a good option if you want to enjoy hours of family fun. Users like the quality of this croquet set, but some complain of its durability.

The set is packed in a traditional carry bag for convenient transport and storage. You can choose between intermediate, classic, expert and vintage style. This item might be a solid choice if you want to enjoy this classic backyard game individually or in teams of two or three.

The general user consensus concerning the Franklin Sports croquet set is that it is well-made and that it works great. Many buyers appreciate its good quality for the price.

However, some buyers complain of the durability – their mallets broke quickly. Some users state that the storage bag is pretty useless for the entire set unless you want to unscrew the six mallets each time you store it. 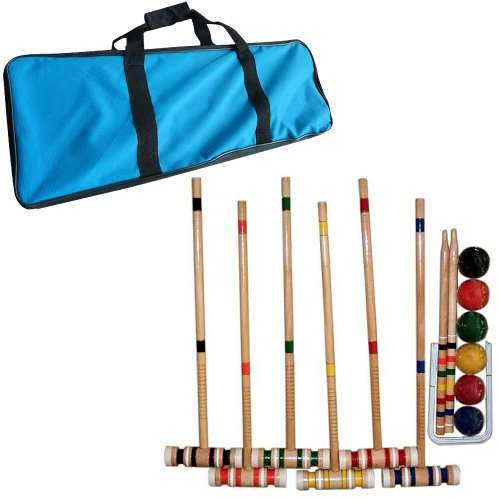 The Trademark Games croquet set is a solid option if you want to enjoy a fun afternoon in your back yard with family and friends. Users like the price/value ratio of this croquet set, but some do complain about the cheap quality and durability.

This product includes six 26” solid wood mallets with 1.85” diameter cushion-capped heads, six 3” croquet balls, 2 solid wood stakes, coated weather protected wire wickets and a carrying case to keep everything together. This product might be a solid choice if you are looking for a croquet set.

In general, users have a good opinion of the Trademark Games croquet set with a carrying case and they conclude that it is a good set for the price. Many buyers state that the balls are durable and well-made.

However, there are some complaints regarding the cheap quality and durability (the handles tend to splinter and that the threads tend to snap). Many buyers complain about the bag because you can’t store the mallets in it unless you disassemble them. 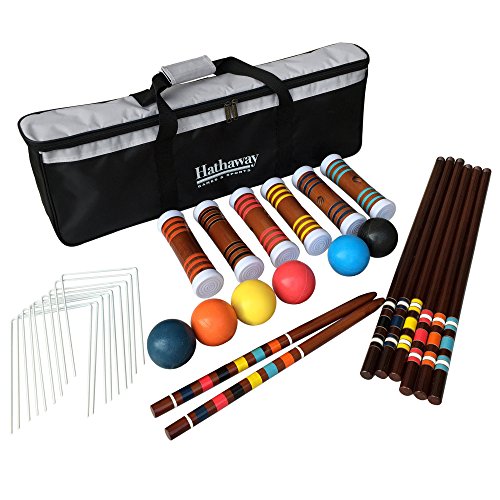 The Hathaway 6-player croquet set might be a solid option for those who want to play a modern version of the game that took England by storm in the 19th century. Users like its sturdiness, but do complain about the poor quality.

According to the manufacturer, the set is made of high-quality materials and designed to appeal to players of all skill levels. It is claimed to provide you with years of outdoor family fun and friendly competition. If you want to transform your yard into a fun, competitive croquet court, you might want to consider this item.

In general, users state that the Hathaway player croquet set is nice and that it feels sturdy.

However, many buyers complain that the set is overpriced for the low quality. They state that the shafts for the mallets are thin and that the balls are small and made of some sort of plastic and not wood.

Croquet is a very popular game that is between two teams, played in an open yard almost equal to the size of two tennis courts. This sport is played by hitting wooden or plastic balls with a mallet through hoops that are placed in a grass playing court. Hoops are also known as wickets.

Object of the game

Croquet is played between the team comprising of either 4 members or 6 members. The main target of the game is to hit the balls through the course of 6 wickets in the proper direction and cease by hitting them against the center peg.

Each team has two colors of balls, blue and black versus yellow and red. The double players team begin to play the game with all the four balls in the first turn, whereas, in singles play, each player has only two balls. The one who completes the whole circuit of 12 hoops and hits the peg first is the winner of the game.

Croquet is considered to be a very old game, and was first introduced in the era of 1960s, during the reign of King Charles the Second of England. At that time this, game was played under the name of Paille-Maille or Pall-Mall, derived from the Latin words meaning Ball and mallet. But by the 19 century, this game had gained a lot of popularity. It is inspiring that an increasing number of young players are actively participating in this game at all levels, from amateur matches to professional tournaments.

The different types of Croquet

Garden croquet is widely played all around the globe, especially in the UK. This version of croquet is best for the beginners to the game to learn how to play it properly. The main rules of playing a garden croquet game include the following points

This is the most popular version of this sport, widely played in the United States and Canada. In this game, the balls are placed in the same order, that is blue, red, black and yellow, throughout the whole game.

The balls deadness on other balls is traced from turn to turn until and unless the ball has been cleared by scoring its next wicket or hoop. But, keep in mind that in this version of croquet, the ball turns nine inches from the boundary unlike the other versions of croquet that are played around the globe.

Sometimes, nine-wicket is also named as “backyard croquet”. It is mainly played in Canada. This type of game includes nine wickets, six balls and just two stakes. The course of nine -wicket is arranged in a double-diamond pattern, with both of the stakes at the end of each course. The player starts from one stake and ends their turn by hitting the second stake, navigating both sides of the double diamond course. While playing individually, the first player who stakes out, wins the game.

In 1980s, this version was invented by John​​​​​ Riches, who lived in Australia. This game is very easy to learn and can be played by six member’s altogether. Ricochet is played with rules that are similar to the rules of garden croquet, with a difference, that when the ball is roqueted, the striker’s ball remains live and he earns two extra free shots. So that, he can easily play their ball near to the opponent’s ball increasing more free shots score.

Try to play this game and cultivate an interest in it, as this game is considered great for enhancing and improving your competitive skills for people of all age groups. This sport will help a great deal in keeping you healthy and physically active.