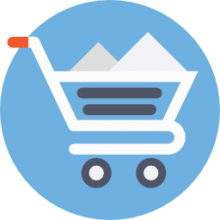 Folding wagons are great for hauling groceries, working in your garden, with many of them designed specifically to transport children (the Radio Flier 3-in-1 and Kid's Ultimate) (Source).

The Ollieroo Utility Wagon is the most rugged option- it has a staggering weight capacity of 600 lbs. But it only folds into a flatbed- it doesn't fully collapse.

For transporting children, buyers say that the Radio Flier 3-in-1 is the best option. If you're looking to take it on the beach, check out either the TimbeRidge or the Ollieroo.

If you're looking for the best collapsible, utility wagon, check out either the YSC or the TimberRidge. 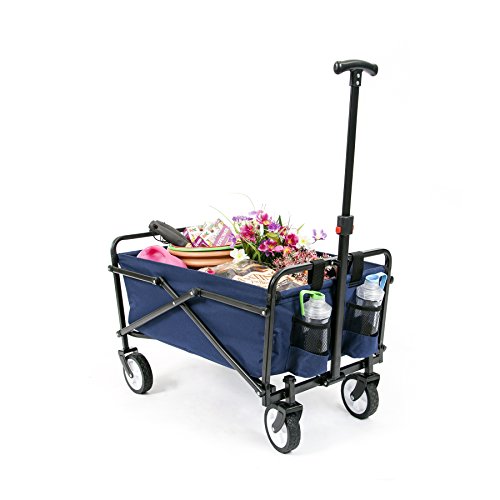 This folding wagon offered by YSC is a good option if you are looking for a folding utility shopping cart. Users like the construction and handiness of this wagon, but some do complain about the dimensions and certain design flaws.

This all-purpose folding cart weighs only 10 lbs, while having 150 lbs weight capacity. It is made of durable high-strength 600D polyester fabric. It comes in three colors: navy blue, red and deep red.This collapsible wagon seems like a good choice if you are looking for a versatile cart that requires no assembly.

The general user consensus concerning the YSC folding utility wagon is that it is a super handy item, great for kiddos and groceries. They state that it has a sturdy construction and yet it is very light-weight.

Purchasers are very happy with the product since it is unbelievably easy to fold up and open and when you fold it up it stays folded, rather than slipping back open. It is also very easy to navigate (responds quickly to turning).

However, many buyers complain about the size being smaller than advertised, as well as about the uncomfortable and short handle. They advise getting a different wagon for beach trips since this one doesn’t have big enough wheels. 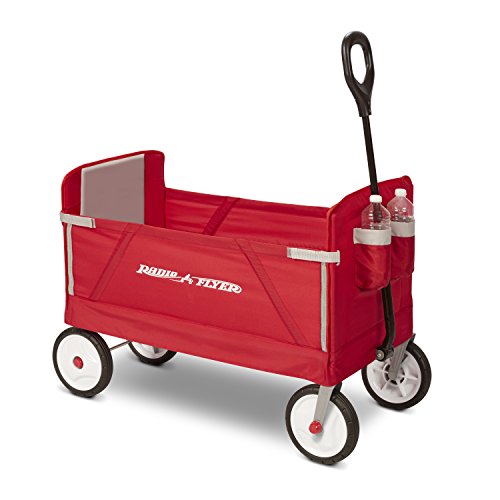 This 3-in-1 folding wagon offered by Radio Flyer is a good option if you are looking for a multi-purpose collapsible cart. Users love the usefulness of this product, but do complain about safety issues and some design flaws.

This product is a full-sized wagon that folds compactly and offers 3 different modes: 2 kids riding, flatbed hauling and bench seating. It features an easy one hand fold, which is great because you can take or store it anywhere, as well as a telescoping handle for easy transport. There are two styles available: base and canopy.

This versatile folding wagon might be a good choice for those who are looking for a durable and comfortable cart.

In general, users have a favorable opinion of the Radio Flyer 3-in-1 foldable wagon. What they praise is that it is sturdy with an extremely strong metal frame, yet light-weight and easy to fold flat.

However, some buyers complain about the safety. One online reviewer explains that due to the front wheels getting stuck the wagon tends to tip over during tight turns. Also, some purchasers complain about several design flaws (lack of a seat belt,the handle not being long enough). 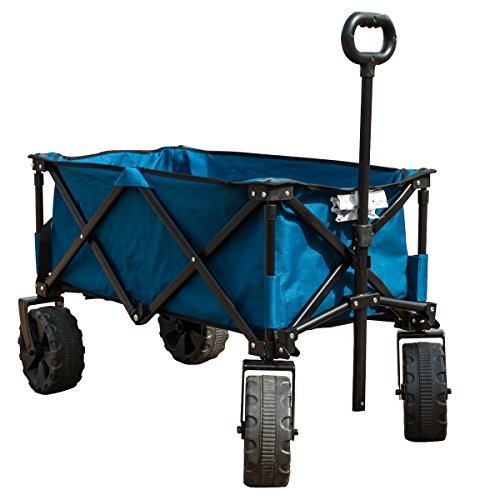 If you are looking for a top-rated folding wagon, you might want to consider this collapsible camping wagon/cart offered by Timber Ridge. Users love the usefulness and quality of this utility wagon, but do complain about certain design drawbacks.

This folding cart is made of high-quality, durable and strong 600D polyester. It features a sturdy steel frame with over-sized large wheels that can support up to 150 lbs. If you want a stable and comfortable folding wagon,this garden/beach/shopping cart might be a good option.

In general, users have a very favorable opinion of the Timber Ridge folding wagon and they agree that it is strong, sturdy and reliable. As they say, the large wheels roll over everything with ease and the handle pivots to make turning very easy. All in all, it is a good quality product that does its job and folds up nicely.

However,purchasers point out that this wagon is not suitable for sandy beaches. Some also state that the handle could be longer. 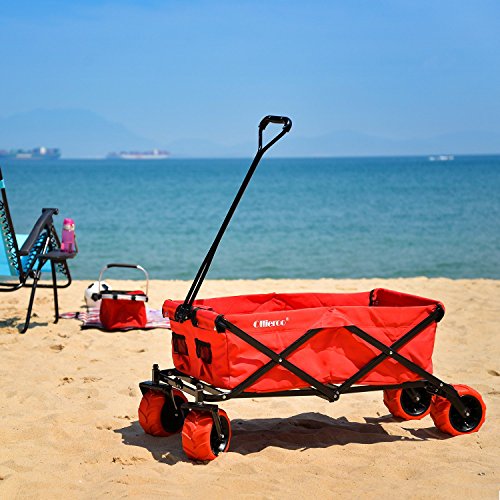 This collapsible cart offered by Ollieroo is a good option for those who need a high-capacity folding wagon.Users love the handiness of this cart, but do agree that it is not suitable for the beach.

This product features a heavy-duty 7’’ x 4’’ thick rubber wheels and a large 30’’ handle for easy hauling. It is made of 600D polyester that can be wiped easily with soap and water only. It comes in three colors: blue, green and red-PU Wheels. If you’re looking for a decent, affordable all-terrain wagon, this would be it sans the ability to pull it at the beach.

In general, buyers have a positive opinion of the Ollieroo outdoor utility folding wagon. They state that it is solid and chunky and folds up flat. Most of them agree that it is perfect for city use.

However,buyers complain about the lack of beach going ability. As they share, it doesn’t pull well with weight in soft sand. One dissatisfied online reviewer says that the frame on her product started to bend after only a few weeks. 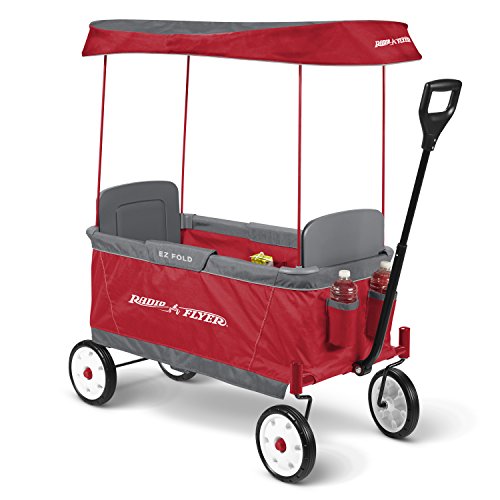 If you are looking for a folding wagon, you might want to consider this ride-on collapsible cart offered by Radio Flyer. Users love its usefulness when out with kids, but do complain about its weight and certain design flaws.

This product is a full-size wagon for 2 riders. It features seat belts for added safety, seat backs for comfortable riding and 4 cup holders. Other features include a removable UV protection canopy, as well as a telescoping handle for easy transport. If you are looking fora foldable wagon that you can use for traveling with kids, this might be a good option.

In general, users are happy with the Radio Flyer Kid’s Ultimate Folding Wagon. What they like in particular is that it folds and unfolds easily, rolls easily and has seat belts. All in all, they agree that it is a well made and well-designed folding wagon for people with small children.

However, some purchasers complain about uncomfortable and super hard seats, as well as the cart being too heavy. Another frequent complaint is that the wagon falls over when folded.

The first folding utility wagon we examined is manufactured by YSC. It comes in a blue, a red and a deep red- it's marketed as an especially lightweight option with a rugged 150-pound weight capacity. Built from polyester fabric, it only weighs a little over 10 pounds, easily collapses to fit in car trunks- a solid solution for traveling to the beach, working in your garden, and shopping at the supermarket for groceries.

The second option we examined was the Radio Flyer folding wagon- you can buy it with or without a canopy and it is marketed as a bench seat, a rider seat, and a hauling solution.

This option also features cupholders, a telescoping handle, and a padded seat cushion. In contrast to other options, this folding wagon is specially designed for children, enabling them to ride it the same time, also enabling bench seating for a child and even an adult, converting into a flatbed hauling solution that easily folds.

With a 150-pound weight capacity, you can haul a lot of stuff. One buyer was impressed by the included seat belts, as well as the construction of the canopy with its retractable poles.

The third folding camping wagon we examined is manufactured by TimberRidge. It's built from polyester, has a 150-pound weight capacity with a steel frame that folds up in seconds, a telescoping handle- and most importantly there is no assembly required.

The fourth outdoor utility wagon we examined was the Ollieroo option. You can get it in several different configurations- with one of them being an especially heavy duty steel option with a 660-pound weight capacity.

They've marketed it as a dynamic transportation solution whether you are going on a family vacation, camping or just need an all-purpose trolley.

Some buyers did criticize it, saying that it was difficult to perform turns with, was prone to toppling over, and that the frame was subject to bending. However other buyers praised it, saying that even in the sand it didn't get bogged down.

The last option we looked at is marketed towards parents- it is the Radio Flyer folding wagon for two kids. It folds up with one hand, includes two seatbelts, a canopy, and four cupholders.