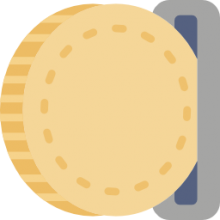 In this post, we examined 5 of the best-selling coin sorters online.

Many banks no longer offer coin counting and sorting services so users are left to using their own methods. When looking for a coin sorter pay attention to how many coins the machine sorts per minute. If you have a lot of cash to sort, this is a major factor.

Also ask yourself if you need to roll your coins too, as there are machines that stack the appropriate denomination for easy rolling (Source).

The Five Best Coin Sorters For 2020 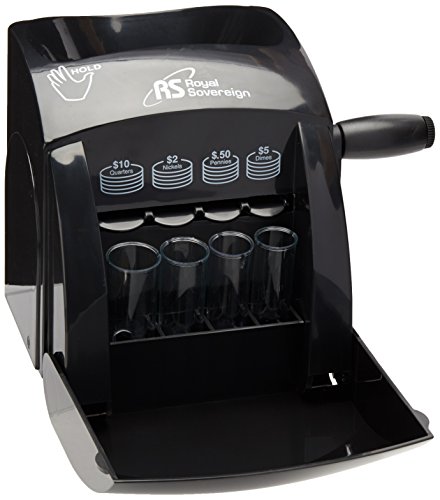 This coin sorter offered by Royal Sovereign is handy, portable, and an excellent choice for counting over 200 coins. Users love the price and the design, but some do note that they had issues with pennies sorting.

The Royal Sovereign sorter for coins measures 7.1” x 9.2” x 8.1”, and it features a lightweight design for mobility, removable plastic coin tubes, a manual hand crank, and a 1-year warranty. What’s more, this sorter is eco-friendly – it doesn’t require electricity or batteries, and it can sort up to 156 in a minute. You can use the machine to dimes, nickels, quarters, and pennies and insert wrappers into the tubes if you want.

In general, users are satisfied with the performance and functionality of the Royal Sovereign manual coin sorter. A buyer comments that the manual coin separator works better than he expected and that it sorts his coins quickly and accurately. He adds that you can pour the stacked coins into plastic wrappers easily.

Another reviewer observes that the sorter functions better without the coin wrappers and advise that you turn the crank slowly to avoid jams. A user also says that this is one of the best coin sorters he has used and that you can easily sort your loose change and take it to the bank. However, some customers have noted that the manual sorter for coins jams from time to time and that the tubes are one or two coins short of full.

If you have some loose change and you want to sort it quickly, this electric coin sorter offered by Royal Sovereign might come in handy. Users love the overflow tray, which gathers spilled coins, but some do note that it’s noisy.

The Royal Sovereign electric coin sorter measures 7.2 x 9.7 x 9 inches, and it features a removable lid, four coin tubes (one per denomination), and a run/stop button.  In addition to this, the sorter has the anti-jam technology for hassle-free operation and a large capacity, which is great because you can sort up to 200 coins at a time. Moreover, you can slide preformed coin wrappers into the coin tubes for convenience.

However, some customers have noted that the sorter is not accurate and that it constantly jams. Some also complain that there are no tube markings to show the number of coins and that it’s frustrating to use the sorter.

This electric coin sorter offered by Digital Energy is convenient, handy, and suitable for sorting quarters, dimes, nickels, and pennies. Users love the price, but some do note that the coin sorter machine is plastic.

The Digital Energy automatic coin sorter features a digital LCD display, which is great because you can keep track of your savings. In addition to this, it comes with a set of coin wrappers for each of the four-coin sorter tubes. Another great thing about this machine is that it features a twist-off lid to retrieve the coins easily. It requires two AAA batteries to run, which are not included in the packed.

A purchaser shares that the electric coin sorter works adequately and that it’s a good choice if you’re looking for something affordable. He adds that it arrived well-packed and in excellent condition and that he is happy with his purchase. 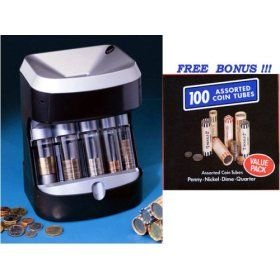 This electronic coin sorter offered by Mag-Nif is handy, user-friendly, and doesn’t take much space. Users love that it saves them time when counting coins, but some do note that the machine is not as durable as they would have liked.

The Mag-Nif coin separator measures 5” x 0.2” x 3”, and it features an overflow tray to gather all spilled coins, five coin tubes, and sample wrapping. Furthermore, the capacity of the sorter is $42.50, and you can use it to sort 20 coins at a time. In addition to this coin sorting machine is made in the USA, and it requires 2 C batteries to operate, which are not included in the package.

As a whole, users have a mixed opinion regarding the Mag-Nif coin sorter, and most of them agree that it’s not suitable for bulk jobs. A reviewer comments that he has used this coin separator for years with no complaints and that he recently purchased a second one.

Another buyer adds that the coin sorter is accurate, but you have to feed the coins one at the time to avoid jamming it. On the other hand, one unsatisfied customer mentions that the machine stopped working the second time and that he doesn’t recommend it. Another purchaser says that the coin separator doesn’t sort the coin correctly and accurately and that it jams too often. 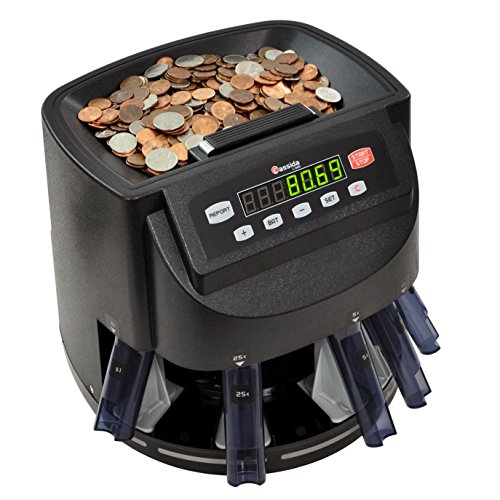 If you’re searching for a high-quality coin sorter to help you count your coins, this C200 coin sorter offered by Cassida might be the right fit for you. Users love that the machine can count 300 coins per minute, but some do note that it’s expensive.

The Cassida coin sorter measures 15.5 x 15.5 x 17 inches, and it features several modes – counting, adding, and batching, an easy-to-read display that shows the number and amount of coins. Furthermore, the hopper has a 2000-coin capacity, and you can use it to sort mixed coins quickly. Another great thing is that the machine has a retractable carrying handle so that you can take it with you and it wraps the coins automatically.

As a whole, purchasers have a high opinion of the Cassida C200 coin sorter, and they praise its functionality and accuracy.

A buyer comments that the coin counter can separate and count $200 in minutes and that it doesn’t jam. He adds that the machine is user-friendly and that the highly recommends it as the best coin sorter. Another reviewer mentions that the sorter is reliable and that it works fast. A user also observes that the sorter makes counting and wrapping coins a piece of cake and that it’s accurate.

However, some customers have noted that the machine is too slow for them and the tubes are difficult to lock in place. Some also point out that the sorter doesn’t last as long as they expected.

One interesting post in Reddit examined how to create a DIY counter bank. Users were a little bit divided about the practical utility because it required manually loading every single penny, nickel, dime and quarter one of the time.

Others were charmed by the invention and said that even more modern, mechanize alternatives do one coin at a time utilizing a tumbler mechanism to stimulate change so that it is in a moving state constantly. This happens either electrically or manually with both hand crank and electrically powered options available. The stimulated coins bounce around until they naturally fall through the gaps one at a time.

The consensus seems to be that this cardboard machine would be a fun DIY project to do with children but lacks practical utility if you’ve got a 50 pounds bag of loose change lying around that you want to organize into coin wrappers to bring to the bank.

Another Reddit user posting in r/frugal writes about collecting coins they find on the ground, using them for small purchases, and sometimes rolling them up to use for larger purchases. One commentator says that they go to a credit union that will take his bulky bags of loose change, employing an automatic sorter and exchanging it for paper cash without even a tax on the transaction.

However other users said that in their experience their banks and local stores won’t accept wrapped coins and further complicating the issue is that the wrappers aren’t free either. An alternative is to use Coinstar machines- I have some experience researching this, as well. Like many people I have a coin jar that morphed into a 25 pounds bag of loose change- in my research, I found only a few Coinstar machines available in New York City that were convenient to me.

Unfortunately, the one I planned on visiting, their Amazon gift card option wasn’t working, and the only other reimbursement methods charged a fee to process.

Is It Even Worth it?

Another Reddit post we looked at examined whether it was even worth rolling the coins and whether it just made sense to find a Coinstar location to get the Amazon gift certificate. The consensus appears to be that if you have a bank or Coinstar in your area that will do the transaction without a fee that this is the best method to dispose of your loose change rather than the time-consuming process of hand rolling.

We also unearthed an interesting subreddit called Coin Roll Hunting or “CRH”- it is described as a hobby where users try to find collectible or out of circulation points by buying or obtaining coin rolls from their banks.

Examining their sidebar they say that the best way to get started is to use your bank account, asking for the ability to make perpetual coin orders for free. These hobbyists look for different things- some specialize in searching out low mintage, errors, or collectibles to sell on eBay. There are also some that look for silver- using an edge checking technique to find a white metallic color that indicates that the coin is silver.

For example, US war era nickels, between 1943 in 1945, 35% silver. Some basic tips to get started include wearing gloves because you can get pretty filthy sorting through all of this dirty change. They also advise that you employ either a digital microscope or a magnifying glass so that you can closely inspect the small details when you’re trying to determine a discovery. Another interesting tip is that you should use a hand truck when you are going to the bank to wheel out large amounts of rolled coins.

The current top post in the subreddit comes from a user who describes a coin star jackpot where the redditor says that he purchased a bunch of silver quarters, from a local man, that the machine was not accepting and now he plans to plant some of these quarters and coin rolls so that his son can find them. This brought up an interesting discussion point- it appears that Coinstar machines will not except silver and this is because the way these commercial machines work is that they measure, weigh it and also use a small electrical pulse to assess the metal content to either accept or reject it.

At the end of the day, it seems that if you can find a bank that will just accept all of the change for you, or an amenable Coinstar machine in your area, that that might be a better option than hand rolling or even purchasing an automatic processor to do all of the work for you.