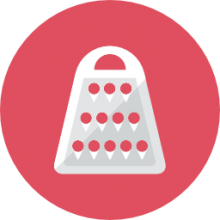 Cheese making kits enable you to create (primarily soft) cheeses at home (Source). They typically include all of the necessary ingredients, minus the milk and some of the hardware (pots, pans, thermometer).

Great as starter kits, buyers tell us that once they get going creating cheese they begin to purchase the kit's ingredients separately, in bulk, to experiment more deeply (Source).

Popular soft cheeses you can create with all of the kits include: Mozzarella, Goat Cheese, Queso Blanco, Chevre, Marscapone, Queso Fresco, and Ricotta (more recipes here).

You'll be able to make multiple batches of cheese using these kits. For example, the Ricki's cheese-making kit has enough ingredients for around 30 batches of cheese, with each batch generating approximately 1 lb. of cheese. So if you make one batch of cheese a week, it'll last you half a year. 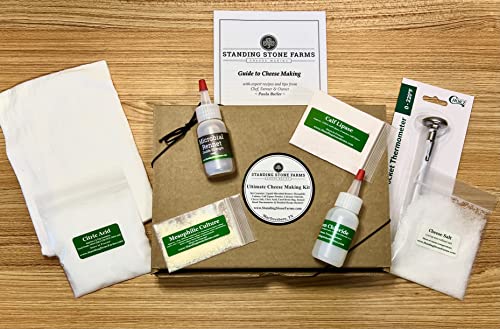 If you want to make preservative-free, Non-GMO cheese, this is the way to do it. They advise you can use goat, cow, sheep or store-bought milk.

When it comes to goat or chevre cheese- you'll have to buy buttermilk and use that as the culture.

It doesn't include a thermometer, so make sure you have one. Though they also produce an advanced kit that ships with instructional DVDs, seasonal spices and a thermometer. 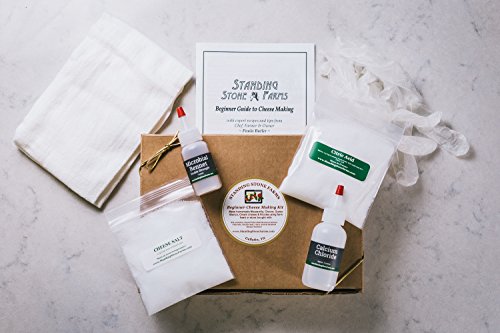 This cheese making kit offered by Standing Stone Farms is a good option for someone who needs a beginner’s kit for making various types of homemade cheese. Users love the results they got from using this kit, but some do complain about missing warning regarding necessary refrigeration.

This product is a basic kit which contains all the ingredients (except the dairy products) you need to make delicious cheeses such as mozzarella, goat cheese, mascarpone and ricotta. It has enough ingredients to turn 20 gallons of milk into preservative-free, non-GMO cheese in as little as 20 minutes. The kit includes detailed recipes and easy to follow instructions.This cheese making kit seems like a good choice if you are looking for an interesting gift for somebody who likes cooking and doing things from scratch.

The general user consensus concerning the Standing Stone Farms cheese making kit is that it is an excellent beginner cheese making kit and it has everything you need except for the thermometer. One happy purchaser states that the little cookbook gives good information and very easy to follow instructions. Another one shares that the instructions are very clear and that the product worked perfectly.

However, some buyers complain about the lack of information on the package regarding the fact that some ingredients require refrigeration. 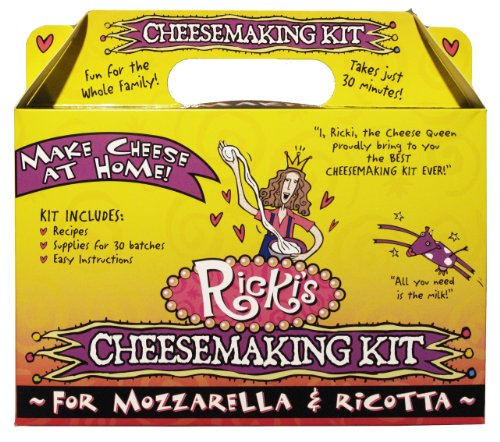 This cheese making kit offered by New England Cheese making Supply Company is a good option for someone who wants to make their own mozzarella or ricotta cheese. Users love the deliciousness of the homemade cheese and simplicity of making it, but do complain about unclear instructions.

This product includes everything you need for making cheese: 8-ounce citric acid, 8-ounce cheese salt, 10 tablets of vegetable rennet, 1-yard butter muslin, 1 thermometer and 1 recipe booklet. You can make your own cheese with this kit in just 30 minutes. This kit features enough ingredients for making about 30 pounds of cheese. This cheese making set might be a solid choice if you are looking for a perfect prepackaged gift for someone who is interested in either cheese or cooking at home.

In general, users have a favorable opinion of the New England Cheese making Supply Company cheese making kit, saying that it is a great way to start making cheese. All you need is included in the set and you can easily make wonderful cheese with it. One purchaser advised to make sure you can find non-“ultra-pasteurized” milk otherwise it’ll never make curds.

However, some buyers complain about the instructions which are not clear nor detailed. One buyer comments that the kit is a little expensive considering that all of the ingredients can be bought separately in bigger quantities for less money.

Making Cheese with The Kit 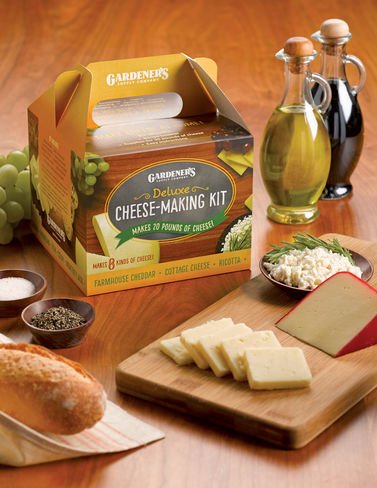 If you are looking for a top-rated cheese making kit, you might want to consider this deluxe set offered by Gardener’s Supply Company.Users love the simplicity and effectiveness of this cheese making set, but some do complain about the instructions that could be written in more detail.

This product is a kit that provides you with all the ingredients you need to make eight kinds of fresh, preservative-free types of cheese right at home. You can make your own farmhouse cheddar, gouda, Colby, Monterey jack, cottage, feta, ricotta and parmesan cheese. If you are looking for a deluxe cheese making kit for soft cheeses, this might be a good option.

In general, users have a favorable opinion of this cheese making kit and they state that it is very simple to use and that a cheese turns out tasty. One satisfied purchaser advises following the directions precisely.

However, some purchasers complain about the instructions that don’t include all the steps, which can make the process too complex. 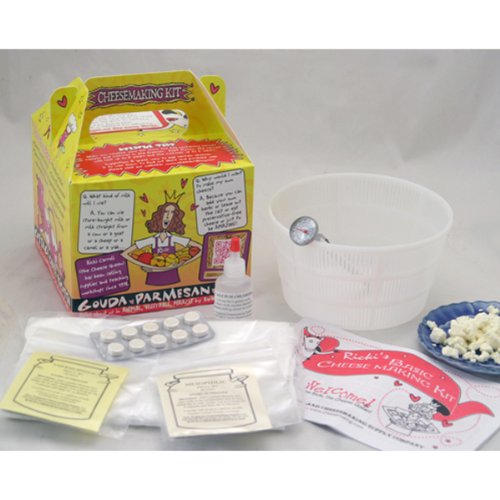 This cheese making kit offered by Ricki’s is a solid option for those who need a basic kit for beginners. Users like the simplicity of making a tasty cheese, but do complain about the mold being wrong regarding its type and size.

This product can be used to create a cheese the way you like it by adding herbs or leaving out the salt and preservatives. It includes all the ingredients necessary to make 8 fabulous varieties of cheese, including a recipe booklet, basic cheese kit mold, coarse cheesecloth and a dairy thermometer. This cheese making kit could be a bad choice though if you want to make perfect looking wheels of cheese.

In general, buyers say that this is a good enough cheese making kit for a beginner since the basic supplies are provided. One satisfied user says that it is a perfect gift for any cheese lover. Another one shares that she managed to make some really fine cheese.

However, several buyers complain about the instructions being a little vague and hard to follow for a beginner. Another thing they complain aboutis the basket cheese mold, which is not the proper mold for most of the cheeses in the cookbook. Plus, one dissatisfied purchaser shares, the mold is small and conical instead of a flat sided cylinder. 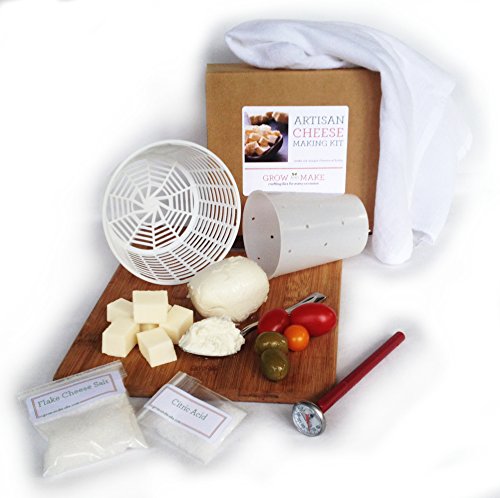 If you are looking for a cheese making kit, you might want to consider this artisan set offered by Grow and Make. Users like that the kit does the job well for a complete beginner, but do complain about the quality of the materials and ingredients.

This product is a kit with which you can make mozzarella, ricotta, goat chevre, paneer and queso blanco. It includes a cheese shaping mold, cheesecloth, thermometer, cheese salt, citric acid, instructions and recipes. If you are looking fora good quality cheese making kit, this might not be such a good option.

In general, users have a favorable opinion of this Grow and Make cheese making kit, saying that it is a nice basic kit that provides you with a few recipes and tips that will make it easy to make a few simple kinds of cheese at home.

However, some buyers complain about the quality of the product. One purchaser shares that the material is cheap and not worth half of what you pay for. Another one says that the cheese molds are too small and poorly made.

The first cheese making a kit we examined is provided by Standing Stone Farms- it's advertised as a mozzarella, ricotta, burricota, DIY kit. They market it as a nearly all-in-one solution, providing all of the necessary ingredients minus the perishable dairy products you need to create mouth-watering cheeses in your own home. Make sure you get a cheese grater for the hard cheeses!

Indeed, they supply a robust quantity of ingredients that will help you convert 20 gallons of milk and into non-genetically modified cheeses in under 20 minutes. The kit includes a vegetarian liquid microbial rennet, calcium chloride, citric acid, cheese salt, disposable gloves and a drain cloth.

In terms of the equipment that you need, you'll have to make sure that you got a stainless steel pot, a thermometer some whole milk as well as either a cultured buttermilk or heavy cream.

The second cheese making kit we took a look at is provided by New England Cheesemaking Supply Company- it ships with 8 ounces of citric acid, cheese salt, 10 vegetable rennet tablets, a cheesecloth, a thermometer and a recipe book. You can even make a fondue from the cheese!

The last artisanal cheesemaking kit we examined is provided by Grow and Make- it's advertised as a means of creating queso blanco, goat chèvre, ricotta, and mozzarella.

While buyers were unimpressed by the inadequately sized and poorly constructed cheese molds, instructions were easily understandable and the ingredients abundant enough to get you started making cheese.

The way cheese is created from milk relies on the interaction of a dairy bacteria and rennet. It interacts with milk proteins and causes them to coalesce into curds, which is the initial stage of cheese creation. You can actually make cheese from nearly any style of milk, whether it is powder dry, 1%, 2%, skimmed or even sheep and goat milk (Source).

As you prepare to make your cheese, it's important that you sanitize surface areas, utensils, pots and pans as well as the cheesecloth.

The temperature should also be controlled. You'll be able to tell when the card is ready to be cut by putting your finger into a 45° angle and observing the curd break neatly around your finger. you can also check the pH and acidity of your cheese- it's important to understand that making cheese relies in large measure on acid development.

Different cheeses have different target acid development profiles that end up determining their particular style- so using an acid monitor can be an effective way to accurately assess city levels in your cheeses' profile.