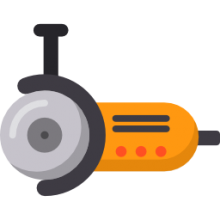 Chainsaw sharpeners are designed to revitalize dulled links (Source). This makes chainsaws more gas-efficient and safe to use (Source).

These sharpeners are designed to accommodate the most common types (.404, 3/8, .325) and if you're in doubt, don't hesitate to contact the manufacturer prior to purchasing (Source).

Probably the biggest buying consideration you'll have to make is whether to purchase a manually powered, portable sharpener or an electric-powered, bench-mounted option (Source).

The XtremePowerUS, the Oregon and the Buffalo Tools chainsaw sharpeners are all bench-mounted and electric-powered options. ​On the other hand, the Granberg Bar-Mounting Sharpener and the Timberline both mount to the chainsaw, and are therefore portable options that are manually powered for on-site use.

The 1 lb. Timberline Chainsaw Sharpener is the lightest weight option. It's completely portable- and according to Timberline can be used on virtually all types of chainsaws- there are 3 primary chain saw sizes (.404, 3/8, .325).

Buyers were impressed by its portability, small size in comparison to traditional chop-saw sharpeners, its quality machining, and ease of use.

Reviewers tell us that it ships pre-configured to provide standard 30 degree cuts, while also supporting other types of pitches and angles.

Reviewers say it took less than 10 minutes to figure out how to operate it and a little under 20 minutes to fully sharpen a chainsaw blade. It is a bit pricey, but can save you the money and aggravation of getting it professionally sharpened. 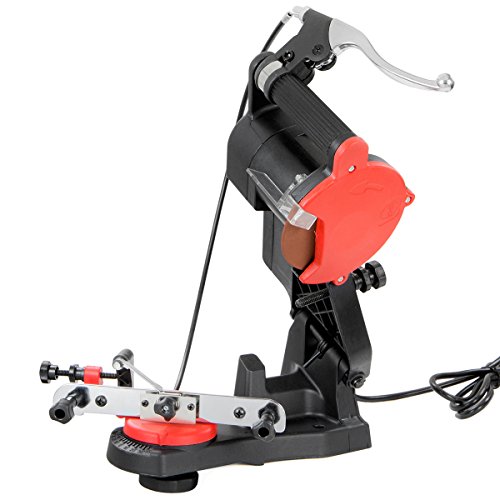 This mini electric chainsaw grinder offered by XtremepowerUS is a good option if you are looking for a85W chainsaw sharpener. Users love the performance of this tool, but some do complain about certain mechanism issues.

This product features a powerful 85W motor and maximum speed of 4200 RPM. Other features include a pivoting head and vice angles adjustable through 35º to the left and the right, as well as a brake to hold the chain in place whilst grinding.

It is designed to be bench mounted which gives you a stable base to work from. This mini electric chainsaw sharpener seems like a good choice for both a professional and a domestic user who wants to make sure that their chain is always in good cutting condition.

The general user consensus concerning the XtremepowerUS chainsaw grinder is that it is easy to set up, easy to use and works well. They say that for an inexpensive sharpener it does a good job, though it is a little under powered.

However, one buyer complains about the poor set up, while another says that the mechanism of this sharpener makes it difficult to get the chain in the right spot for proper sharpening. One dissatisfied purchaser shares that he received a broken product. 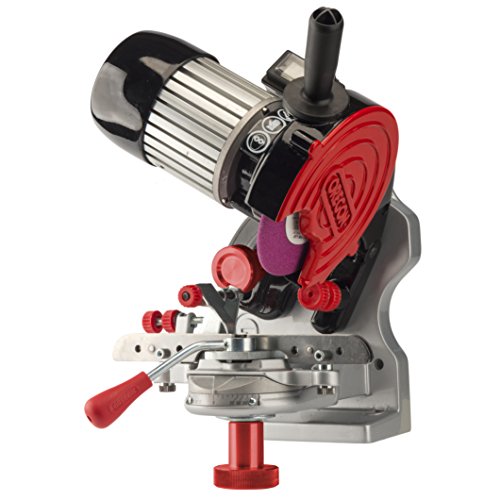 This bench or wall mounted chainsaw sharpener offered by Oregon is a good option if you are looking for a tool to add to your workshop. Users like the performance of this product, but do complain about the assembly instructions.

This product features a dressing brick, a quick check grinding template, three grinding wheels for sharpening of 1/4″, 3/8″ low profile, .325″, 3/8″ and .404″ pitch chain, wheel wear indicator and a built-in light. It can be bench mounted or wall mounted. This chainsaw sharpener might be a good choice for an occasional user.

In general, users have a favorable opinion of the Oregon chainsaw grinder.What they praise is that the product is solidly built, well made, easy to setup and has good controls for sharpening many different chains.They state that the overall quality and finish of the unit seems decent. One happy purchaser shares that in a year of use he experienced no problems.

However, many purchasers complain about virtually useless assembly instructions, which give no clue about how to get the tool aligned. Several buyers share that the product arrived missing parts. One dissatisfied buyer says that the vise angle part of the machine is not precise. 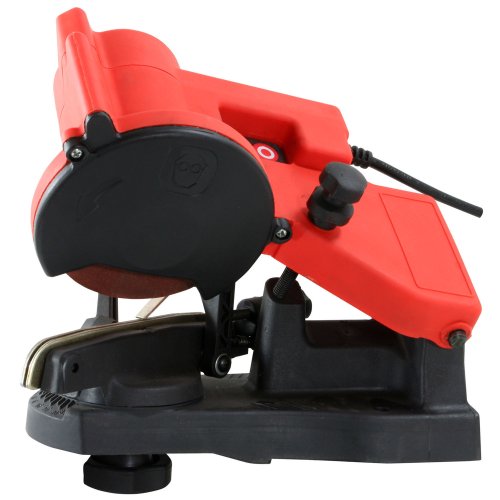 If you are looking for a top-rated chainsaw sharpener, you might want to consider this electric one offered by Buffalo Tools.Users love the sharpening performances of this tool, but many do complain about the vague instructions.

This product is easy to use when mounted to a bench, wall or vise for easy access and stability. It adjusts to most frequently used chain designs. It features 4200 RPM grinding speed, 60 Hz, 85W, and it uses a 4-1/4’’ x 1/8’’ grinding wheel with 7/8’’ arbor. If you want to save time and money by sharpening the chain by yourself,this chainsaw grinder might be a good option to consider.

In general, users have a favorable opinion of the Buffalo Tools electric chainsaw sharpener and they agree that it is a fine machine for the average homeowner. It does a good job sharpening and it will sharpen a dull chain. One satisfied buyer shares that it is easy to use, cuts each tooth the same length (so each tooth has the same bite) and fits many different chains.

However, many purchasers complain about poorly done instructions. On the other hand, some buyers emphasize that if you have a bit of mechanical sense you should be able to figure out how to set it up right relatively quickly. 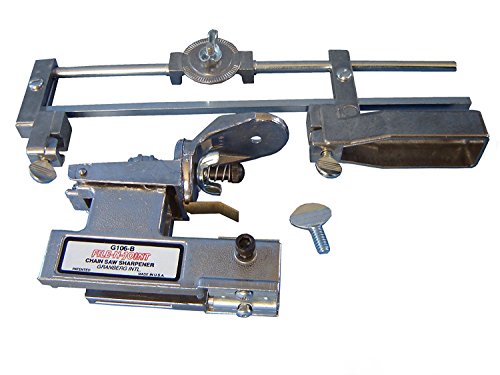 This electric chainsaw sharpener offered by Granberg is a solid option for those who need to keep their chain in top condition.Users like the construction and functionality of this tool, but some do complain about the accuracy and construction.

This product is a precision bar-mounted chainsaw sharpener made of cast aluminum and zinc-plated steel. It uses calibrated swivel guide markings to set and hold correct sharpening angle. Integrated features allow users to set file height and tooth length.This chainsaw sharpening device could be a solid choice if you want a tool that mounts to any saw with any file size.

In general, buyers have a positive opinion of the Granberg bar-mount chainsaw sharpener. They state that it is very solidly built with all-metal construction, thick sidewalls, and easy-to-read dials. Many of them are satisfied with the tool being very easy to use and accurate. One happy purchaser states that this tool provides a complete solution for all chains used on hand-held saws.

Another one says that it sharpens the chain at the exact perfect angle when you set it up correctly. He adds that it is also useful for getting all of the cutters to the same length.

However, some buyers complain about it being sloppy and lacking precision. Another complaint is that the device does not have top-notch construction quality. 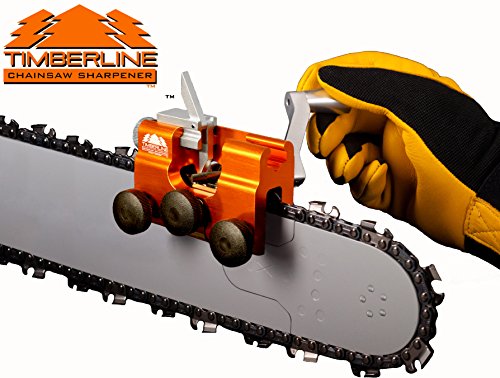 If you are looking for an aluminum chainsaw sharpener, you might want to consider this one with 3/16″ carbide cutter offered by Timberline. Users love the handiness and efficiency of this tool, but some do complain about several construction drawbacks.

This product is a portable, durable and high-quality aluminum chainsaw sharpener. It is designed to be used for sharpening .325″ pitch chains.The tool is precise and sharpens every tooth to the same length and angle. If you are looking fora chainsaw that is easy to use and gives professional results, this might be a solid option.

In general, users are very happy with the Timberline chainsaw sharpener. What they like in particular is that the tool is portable and small(therefore not requiring permanent storage or bench space).

Moreover, they say that it is finely machined and well constructed, as well as stunningly simple to use. As one user says, it came ready to use for a standard 30-degree cut, .325 pitch saw blade with no adjustments required (it also supports other angles and other pitches).

However, some purchasers complain about the learning curve being higher than expected and the carbides being brittle.One dissatisfied buyer says that he couldn’t get teeth sharpened equally.

The first electric chainsaw sharpener we took a look at is the XtremepowerUS model- it has an 85 W motor with a maximum speed of 4200 RPM and comes equipped with a brake. Designed with a vice and a pivoting head it is adjustable 35° right and left in the break enables you to keep it in a fixed place while you are sharpening and grinding electric-powered chainsaws.

The second chainsaw grinder we examined is manufactured by Oregon- it is a wall or bench mounted option that can sharpen 1/4 inch, 3/8 inch, and .404 inch pitch chain. It's marketed towards homeowners who will only need to use it occasionally- so not a business-ready option.

The third electric chainsaw sharpener we examined is manufactured by Buffalo Tools- it's marketed as a means of keeping your chainsaws sharp and in top operational condition. You'll be able to mount this to a wall, bench or vice and it capably conforms to different chain designs with a 4,200 RPM grinding speed power by a 120-volt wall outlet. Indeed, they've marketed this particular chainsaw sharpener towards homeowners who frequently have to run out to the hardware store for periodic sharpening of their chainsaws. They say that dull chainsaws that are in need of sharpening increases the time and effort to perform chainsaw cuts outdoors and can often pose safety hazards for the operator (Source).

The fourth bar-mounted chainsaw sharpener is manufactured by Granberg- it is a USA-made option that can accommodate any type of saw with any type of file size.

One reviewer told us that it's capable of sharpening any handheld chainsaw- using jig filing it produces incredibly sharp results and it can work offsite in conjunction with a stump vice. Buyers say that once you have calibrated it correctly, it's able to sharpen chainsaw blades at perfect angles and provides an exemplary means of establishing all of the cutters to the same length.

The last option we examined a little bit different- it is a carbide cutter chainsaw sharpener that is portable. One buyer who owns and operates a sawmill and works with cutting down trees and creating massive amounts of firewood says that it is a highly functional and completely portable option for sharpening your chainsaw links.