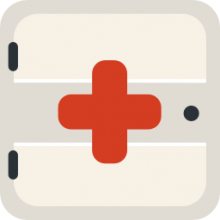 Cervical traction describes the stretching of the neck. Typically people use cervical traction when they have sustained injuries like those from whiplash in their necks (Source).

The neck is actually also known as the cervical spine and contains 7 vertebrae. Cervical traction enables you to generate some spacing between your vertebrae to help ease discomfort and pain (Source).

These inflating cervical traction collars enable you to adjust traction with an air pump and let you experience traction while you are at leisure.

As opposed to over the door devices that require to sit against a door for an extended period of time.

Over the door vs Inflatable neck traction

Below is a pair of videos highlighting the differnce between these different types of neck traction.

Over the door neck traction 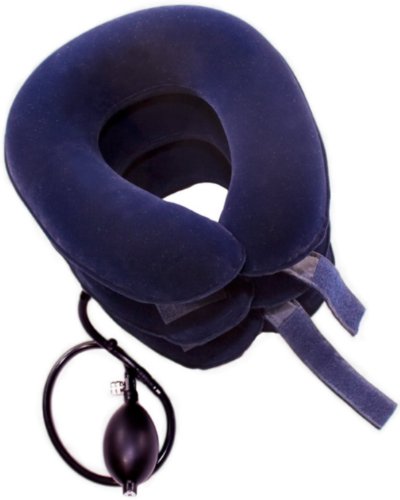 This cervical traction collar is an inflatable model designed to be lightweight and portable, and easy to use while you are on the go. It is engineered to provide traction therapy targeting degenerative disc disorders, joint issues, pinched nerves, headaches as well as osteoarthritis.

Its manufacturers claim that it provides the exact same benefits of traditional over the door traction devices but with the added benefit of being portable- you're able to use it while watching TV, doing work, or otherwise while at leisure.

As opposed to conventional over the door traction devices that require you to since rigidly against a door for extended periods of time, this model allows you to experience neck traction while watching TV or working at the computer. You just need to adjust the level of traction by squeezing the hand air pump.

This inflation bulb also comes with a release valve so that you can quickly decompress if you need to. Many users describe be soothing effect it has on their necks and write that as a traction collar it's an exceptional way to help heal chronic neck pain issues while doing leisure activities.

'Over the door' cervical traction

Every cervical traction kit is a little bit different-it's important to read the instruction manual thoroughly so that you are familiar with how your kit actually works. The harness will be a snug fit.

You'll then want to gently use the cervical traction tension cord to start the process and create some traction in the neck vertebrae.

Why is traction important?

Traction enables you to treat and alleviate medical problems and pain occurring in the neck vertebrae. If you do not take care of these issues, they are likely to worsen with neck injuries or pinched nerves eventually proceeding to become chronic pain conditions that can be truly debilitating.

If you have suffered a neck injury before, or are suffering from one now, you are likely aware that the pain doesn't just stop in the neck. It can travel down your shoulders and your back, limit the range of motion you have swiveling your head side to side or up and down.

This is why it's important to find an integrative solution-whether you work with a physical therapist who provides you stretching exercises, or an acupuncturist who focuses on alleviating trauma associated with muscle strains and sprains, it's best to take a holistic approach to recovery.

Conservative care can take many different forms, even including opioid and anti-inflammatory medications, hot and cold applications and even transcutaneous nerve stimulation.

Is cervical neck traction for you?

If you are experiencing neck pain, neck traction can be a solid option for you to investigate. It's important to check in with a physician or other trained medical professional so that they can assess your injury to ensure that you are a candidate for neck traction.

That said, there is a lack of empirical evidence demonstrating the medical value of cervical traction devices and kits.

In general, during traction the head is pulled up and away from your neck- this enables you to get a really nice stretch in the ligaments and muscles surrounding the vertebrae of your spine, selectively creating space between your cervical vertebrae.

The effect of this is to relax your muscles and to enable pinched nerves to be released from their painful grip.

During manual traction, a physical therapist will manipulate your head using their hands, positioning it and working with it to simulate traction.

During mechanical traction, a machine or kit typically a sling, harness or inflatable neck collar is used to provide the pressure that creates cervical neck traction. What should you expect if you are receiving traction for a cervical neck pain issue?

Generally, if you're receiving mechanical traction, most physicians and chiropractors encourage 7 to 10 pounds of pressure applied for a half hour increments sometimes 2 to 3 times a day. The folks over at everydayhealth.com write that most physicians encourage gentle intermittent pressure during mechanical traction to avoid injuring or activating a pre-existing cervical neck pain condition.

Are You A candidate?

While there is not much empirical evidence, neck traction is still considered a popular and relatively safe way of treating cervical pain disorders. It is widely believed that the traction stretching can help alleviate pain associated with spasms and sprains of the neck muscles and the painful condition of a pinched nerve.

They are all pretty cheap and with the invention of inflatable neck traction devices it's easier than ever to experience pain relief while on the go or just sitting at home in front of the TV.

The Complete Guide to Neck Traction at Home

The Best and Safest Way to Treat Neck Pain