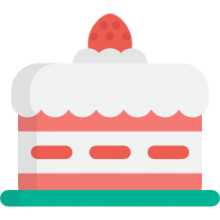 In this post, we examined 5 of the best-selling cake pop makers.

These specialized baking machines are used to make cake pops, which are small, round pieces of cake that are coated with icing and mounted on a stick much like a lollipop (Source).

These baking presses work like waffle or pizzelle makers in that you place batter in the bottom tray and then close the upper tray, and the batter bakes into tiny, ball-sized cakes (Source).

Making the pops is time-consuming, but it can be a fun activity, and most people say the result is worth the effort. They’re great for parties and things like wedding showers and birthdays.

To make them, experts say that you can get away with using a simple cake mold or rolling crumbled cake and frosting into balls if you’re only making a few, but for bigger jobs, you’re going to want to use a dedicated tool. (Source).

Following are five cake pop makers and their features. 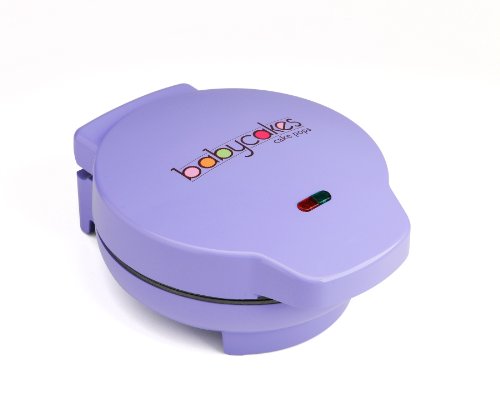 This baking machine offered by Baby Cakes is well-made, pre-heated, and an excellent choice for birthday parties. Users love the price and the cute purple color, but some do note that it gets too hot.

The Baby Cakes maker measures 8.1” x 9.8” x 4.7”, and it features non-stick baking plates, which is great because you can clean it in seconds. What’s more, you can bake 12 of the pops or doughnut holes in a couple of minutes and decorate them to your liking. It comes with accessories – a plastic stand, a fork, recipes, and 50 sticks. It is also available in a 9-pop cake model.

In general, users are satisfied with the design and performance of the Baby Cakes pop maker, and they highly recommend it. A reviewer shares that the mini cake pop maker saves her a lot of time because it cooks a batch in 3-5 minutes. She suggests that you buy boxed mix for better results. Another buyer comments that the maker cooks evenly and that she hasn’t had issues with the treats getting stick to the plates. A purchaser also observes that her 9-year-old granddaughter enjoys using it and that it’s well-made.

However, some customers have noted that the pop maker is hard to use and that the cake pops are not completely round. Some also note that the treats are too small and that the hinges broke quickly. 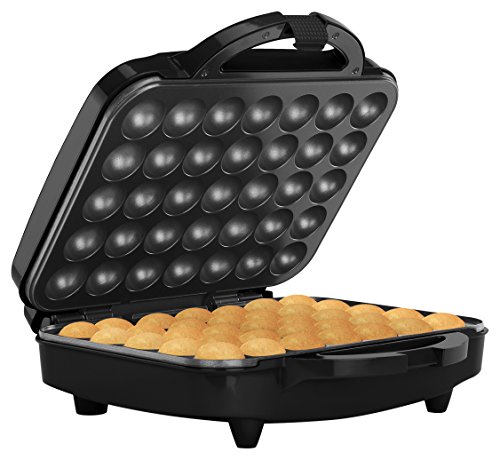 If you want to surprise your guests with delicious pop cakes, you might try this cake pop maker offered by Holstein Housewares. Users love that they can bake up to 35 mini cakes in minutes, but some do note that it’s expensive.

The Holstein Housewares cake pop machine measures 13.3” x 13.2” x 5.2”, and it features non-stick coated cooking surfaces, power-on light, a ready indication, and upright design which saves you storage space. Another great thing about this product is that it has a safety lock to keep it close while in use in addition to a non-slip base. What’s more, you get a cake pop recipe book.

A purchaser also observes that the maker works great and that it takes no more than 10 minutes to cook a batch. She suggests that you don’t fill the holes all the way or they’ll overflow. However, some customers have noted that the cake pop maker doesn’t cook perfectly round cake pops and that it’s not what they expected. Some also complain that the cakes crumble when they take them out. 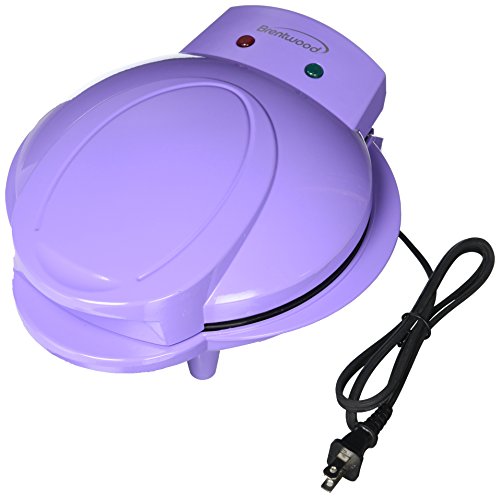 This cake pop baker offered by Brentwood is affordable, easy to use, well-design, and an excellent idea for a Christmas gift. Users love the design and the color, but some do note that they received a damaged unit.

The Brentwood cake pop maker measures 11.1” x 5.6” x 8.9”, and it features non-stick coating surfaces, which is great because you’ll be able to pop the cakes quickly. Another excellent thing about this product is that you can use it to make donut holes, mini cinnamon, buns – 12 at a time, and you clean the maker in minutes.

In general, users have a favorable opinion of the Brentwood cake pop baker, and they are satisfied with its design and performance. A reviewer comments that the maker works wonderfully and that she doesn’t have any issues with it. She also states that the maker comes with cake pop recipe, but she recommends using a cake mix for more flavor. Another purchaser shares that the cake pop baker makes perfect cake pops every time and that she highly recommends it.

A user also comments that you can make a batch of cake pops in four-five minutes and that you can use it for pancake balls. 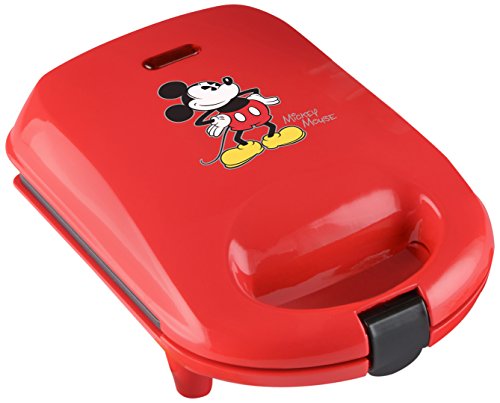 If you want to surprise your daughter, who loves these pops, you might consider this Mickey cake pop maker offered by Disney. Users love the cute red color, but some do note that the cake pops are not what they expected.

The Disney baker measures 4.2” x 6.9” x 9.5”, and you can make Mickey-shaped pops. It features a non-stick baking plate so that you don’t have to worry about sticking, non-skid rubber feet, latching handles, and illuminated power light. Another great thing about this product is that cord wrap so that you won’t be tripping over it.

In general, users have a favorable opinion of the Mickey press, and they are satisfied with its design, performance, and functionality. A reviewer comments that it takes three minutes to bake a batch of Mickey treats and that the maker comes with sticks and a piping bag with a tip for the batter.

Another buyer mentions that you might need a few attempts until you get the right amount of filling but the maker works perfectly. A user also observes that the pops are well-cooked and that they are round and smooth.

However, some customers have noted that the description is inaccurate and that the cake pop maker bakes four, not nine pops and that it’s hard to make the cake pops round. Some also warn that the baker stopped working after a couple of months. This baking machine offered by VonShef is well-designed, affordable, and an excellent choice for cake lovers. Users love that the machine is easy to use, but some do note that the treats are somewhat too small for them.

The VonShef maker measures 9.4” x 5.8” x 13.2”, and you can cook up to 12 at a time and decorate them as you like. It features non-stick plates, which is great because the mine cakes pop out easily, and it comes with 50 paper sticks and a 12-hole cake stand.

A reviewer comments that once you learn not to overfill the plates, the VonShef 12 maker is very easy to use. She adds that the cakes are always well baked and that they don’t stick to the surface at all. Another purchaser mentions that you can clean the baker easily and that you can prepare 60 mini cakes in less than half an hour.

She highly recommends it as one of the best machines in a market crowded by junk. A user advises that you don’t fill the plate holes all the way and that it’s perfect for baby showers. However, some customers have noted that the maker set doesn’t cook the batter evenly and that the resulting treats are a bit too fragile.