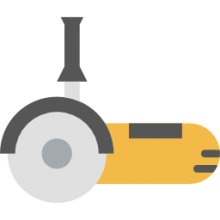 Cabinet table saws get their name from their cabinet-style base (Source).

As opposed to contractor saws that are designed for jobsite portability, cabinet table saws are more substantially constructed and designed to exceed the performance requirements of professional and hobbyist woodworkers (Source).

As well, this brand of table saw is constructed from sturdier components (iron and steel) and features solider gearing, trunnions, and arbor assemblies, with higher-powered motors than a flimsier contractor saw (Source). This means that these saws easily cut thick hardwoods, providing vibration-free operation (Source).

The Grizzly is marketed as a hybrid contractor/cabinet-style option. What this means, according to buyers we spoke with, is that the trunnions that hold the blade assembly are actually attached to the table's bottom, as opposed to traditional cabinet saws that have them attached to the cabinet. 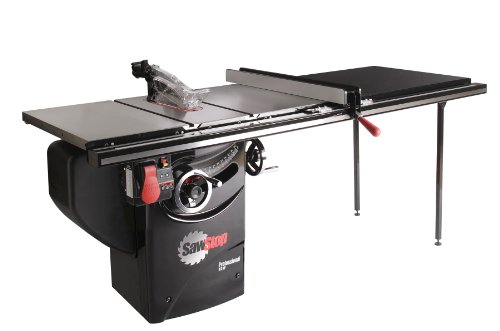 The SawStop option is comparatively expensive- but one of its unique features is its electronic detection system. It's also distinguished by its superlative build quality.

The blade stops spinning within microseconds whenever it detects that your (conductive) skin has made contact with the blade (Source).

One reviewer we spoke with, who has friends who've lost fingers on table saws, tells us that it saved his finger. He had lost focus for a moment and instead of losing a finger, the blade-brake activated, and he suffered a small nick on his index finger- instead of losing the whole thing!

The lightest weight option is the 288 lb. Jet cabinet table saw with a 52" fence system. The 536 lb. ShopFox is the heaviest option- buyers praise its power and stability.

The Difference Between Cabinet and Contractor Table Saws 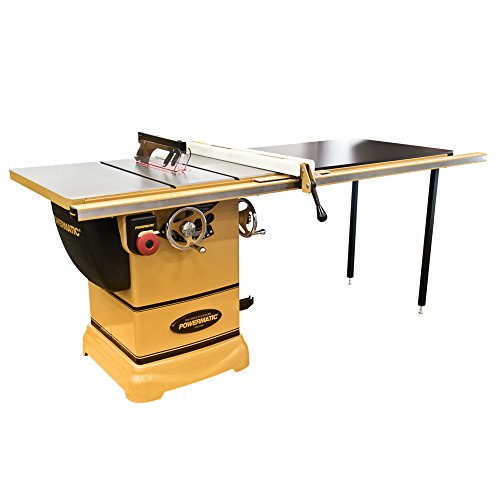 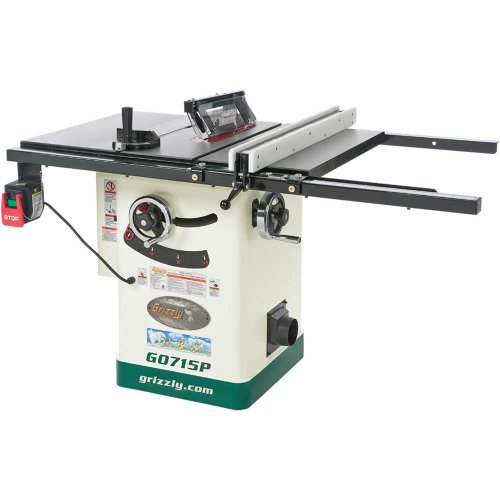 This 10-inch cabinet table saw with riving knife offered by Grizzly is easy to use, efficient, and suitable for various DIY projects. Users love the dust control feature, but some do note that they had problems turning the handle.

The Grizzly hybrid saw table measures 26” x 30” x 43”, and it features a quick-change blade guard, anti-kickback pawls, a single-phase 2 HP motor, a serpentine belt system for quiet operation, and a weight of 450 pounds. Moreover, it has an interchangeable riving knife and an easy-glide fence system with CamlocAk T-shaped fence for accuracy. Another great thing about this cabinet table saw is that it’s CSA certified.

A buyer comments that this 10-inch hybrid table saw is very precise and that he uses it regularly with no issues. Another reviewer mentions that he didn’t encounter problems during the assembly process, but notes that you’ll need a couple of hours to do it. He adds that the table saw works very quietly and that the fence and the guard are of excellent quality.

A user also shares that as a carpenter he finds this hybrid saw table to be handy, easy to operate, powerful and accurate. He highly recommends it. However, an unhappy customer has said that he encountered a serious problem with the motor and that he doesn’t recommend the table saw for any woodworker. Some other users also complain that the cabinet table saw arrived poorly packed with broken parts. 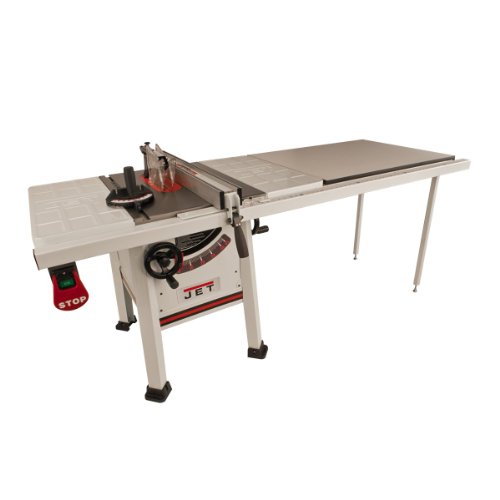 If you are looking for a heavy-duty table saw with a riving knife, you might want to take a look at this 10-inch Proshop table saw offered by Jet. Users love the integrated arbor lock, but some do note that the installation is tricky.

The Jet cabinet table saw measures 82” x 35” x 39”, and it has a transparent blade guard, a quick release riving knife which is great because it reduces kickbacks, a cast iron table with a T-style miter gauge slot, a 52-inch fence system, and a weight of 288 pounds. Another great thing about this table saw is that it features an enclosed cabinet with a leg stand that assembles easily. The package also includes a low profile riveting knife for non-through cuts.

An online reviewer comments that the fence system installs quickly and that the holes line up perfectly. He adds that the instructions for assembly are well-written and easy to follow.

Another buyer comments that the Jet ProShot table saw is sturdy and that he doesn’t have any issues cutting plywood.  However, the user mentions that the fence is of average quality and that he would change it for a higher-quality one. A user also notes that it’s easy to make precise cuts with the Jet cabinet saw table and that he is impressed with the quality of material.

However, one customer has said that the extension table has poorly designed legs and that the rail installation is hard due to mismatched holes.

This cabinet table saw offered by Powermatic is handy, precise, and heavy-duty. Users love that the saw cuts smoothly, but some do note they had issues with the package and parts were missing.

The Powermatic table saw measures 27.5” x 36” x 63.75”, and it features a 1-3/4 HP motor, a poly-v belt for reducing vibrations, a 50-inch fence, a collection hose for maximum dust reduction, a tool-less guard assembly for extra safety, and a weight of 465 pounds. Another great thing about this electric table saw is that it features a 60-degree pivoting miter gauge and a hands-free power switch. It’s wired for 115 V.

A buyer comments that it took him around five hours to assemble the cabinet table saw and that he was very impressed with its sturdiness and functionality. He says that the table saw arrived in separate boxes and that he cut through 1-inch walnut with no issues. Another online reviewer mentions that the table saw works far better than he expected and that it cuts even a 10/4” hardwood without getting bogged.

He highly recommends it as the best cabinet table saw available on the market. A user also notes that he doesn’t have any complaints regarding the performance of the Powermatic table saw, but he states that there is no low-profile riveting knife included. One other user also has said that the color doesn’t match the provided picture. 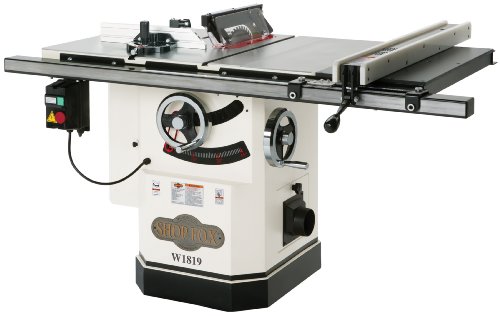 This 10-inch cabinet saw table with riving knife offered by ShopFox is heavy-duty, practical and suitable for professional carpenters. Users love the wide-span, easy-glide T-fence system, but some do note that they had issues with the delivery.

The ShopFox table saw measures 67” x 46.5” x 30”, and it features a polished cast iron table and wings, quick-release riving knife, a blade guard, an adjustable T-slot miter gauge with fence extension, and heavy-cast handwheels. Another great thing about this table saw is that it has a magnetic switch for safety, and it also has a 4-inch dust collection port.

In general, users have a favorable opinion of the ShopFox cabinet table saw, and they praise its design and functionality. A buyer comments that it took him quite a lot of time to set up the table saw properly, but once he powered it up, he didn’t have any issues with it. He adds that it’s sturdily built and that the motor is powerful.

Another purchaser observes that the table saw passed the nickel test with no issues and that it cuts smoothly and precisely. He highly recommends it as one of the best cabinet table saws available for professionals. A user also notes that the fence moves easily and that he didn’t have any problems with the assembling process. However, one user has said that the saw was shipped in separated boxes and that some of them were badly damaged.

If you are looking for a high-grade, professional table saw, you might take a look at this cabinet saw offered by SawStop. Users love the powerful 3-HP motor, but some do note that the saw is very expensive.

The SawStop table saw measures 85.2” x 33” x 34”, and it features a fully enclosed cabinet, a 52-inch T-Glide fence system, two adjustable legs, a dust collector, a blade guard, a miter gauge and a weight of 515 pounds. Another great thing about this saw is that it has electronic safety detection system for preventing accidental injuries.

A user shares that he has been using the SawStop cabinet saw for more than six months without any issues and that the customer support is exceptional. He adds that the assembly instructions are very well written and that the motor hasn’t bogged even once.

Another reviewer observes that the saw arrived well packed and that he took great pleasure at assembling it. The buyer also says that this is one of the quietest saw that he has ever used and that it’s easy to adjust the fence.

A purchaser also states that the dust collection feature works great and that the safety system is exceptional. However, some customers have said that the extension table is made of thin laminated wood and that they needed to do some modifications before using the saw.

The first table saw we examined is manufactured by Grizzly- it's marketed as a hybrid contractor/cabinet style option that has the heft of a high-quality table saw with the mobility of a contractor saw.

Pro Tip: If you're looking to drill a hole in the workpiece without having to cut up the core material, try using  a hole saw (Best Saw Guide).

Contractors we spoke with said that, along with reciprocating saws, it's a near essential if you're doing carpentry work. It's got a 2 horse power motor, ships weighing 404 pounds, featuring a cast iron table, a T-slide miter gauge, as well as an easy gliding fence system.

The second cabinet table saw we examined is manufactured by Jet- it includes a 52-inch fence, a riving knife and steel wings. This Taiwan-manufactured option, buyers say, has a nice fitting miter gauge slot.

One buyer was impressed by the quality of the fence and table saw but reserved some criticism for the design and construction of its legs.

Specifically, this homeowner who installed it in a basement workshop told us that he had to extend them to the maximum height so that they would be level with the wings and table saw and found the result is that if you put too much pressure on it, the legs are insecure and have a tendency to pull away from the table.

The third cabinet table saw we examine was the Powermatic- it features a 50-inch fence, runs off 115 V power and is designed for efficient dust collection. One buyer purchased it primarily because he didn't want to deal with the hassle of a 220 V conversion issue.

The fourth table saw we examined is the ShopFox option- they ship it in 2 different models- one with a 29.5-inch rip capacity and one with a 49-inch rip capacity. It's marketed as a precise option with a cast-iron wing and table with an integrated blade guard and T-fence system.

The blade tilt goes between 0 and 45°- buyers say this is an easy way to cut chamfers, bevels, and compound miters.

The last option we examined was the SawTop cabinet saw- you can purchase it with and without the brake cartridge. It's marketed as a precise and powerful tool that provides deflection-free lockdown.

In addition, scanning their product description, it's marketed as a hobbyist and craftsman compatible option that provides high-quality performance with a proprietary safety system that can quickly halt the blade in a matter of milliseconds.