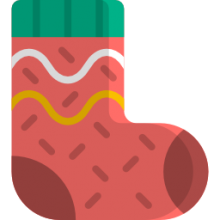 Built from heavier weaves with enhanced insulating fibers, they are traditionally thickly cushioned, breathably ventilated, and designed to reinforce high-impact areas of the foot.

Particularly where the toes contact the steel toe box of a workboot and in the heel- for maximum extremity protection (Source).

The Dickies crew work sock is the only Kevlar pair of socks we examined- they are a 82% polyester, 11% nylon, 6% Kevlar, and 1% spandex blend. The rest are constructed from blends that include polyester, cotton, wool and spandex, most commonly.

Typically, these socks perform well for users who are treading on concrete 8 hours a day, toiling inside of factory facilities, or dealing with the harsh and rough terrain of a construction area. 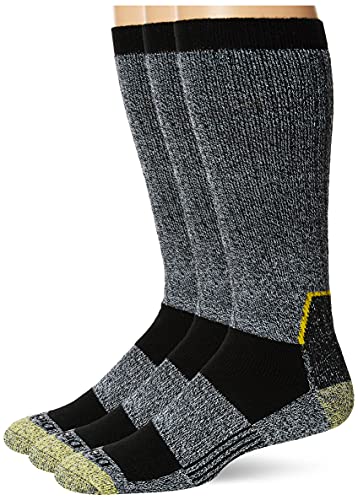 These American-made Kevlar work socks feature strong reinforcement throughout their heel and toe, designed to cushion the feet during high-impact, abrasive work conditions.

Arch compression socks technology is designed to 'hug' your foot, ensuring they don't wriggle around inside your shoe or work boot. Integrated achilles heel pads also protect this sensitive area from high-boot chafing.

One buyer we spoke with works inside of a factory that gets really hot. He told us he puts these pair of comfortable socks through their paces during highly-strenuous work days, but they are exceedingly comfortable and durable, though after several months the heel cushioning has worn out a bit.

Another construction worker told us that these Kevlar reinforced work socks are more expensive than traditional work socks, but for someone that spends upwards of 10 hours a day on his feet they made his feet feel as though they were floating on clouds!

They do get a little bit warmer than regular, non-Kevlar work socks, but not too bad. A solid buy- especially if you're on your feet all day and foot comfort/security is a priority. 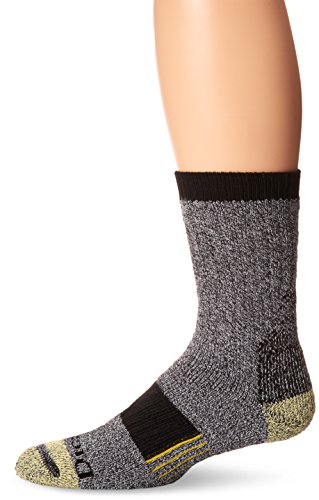 These Kevlar reinforced steel toe crew socks offered by Dickies are a good option for someone who needs anti-tear socks. Users love the durability of these socks, but some do complain about the quality and receiving pairs with holes in them.

This product features fiber reinforcement throughout steel toe and heel which enables abrasion resistance for long-lasting durability. The hiking socks are made of polyester (82%), nylon (10%) and spandex (8%). These hole-resistant socks seem like a good choice if you are looking for Kevlar athletic socks with Achilles heel protective pad and power cushion.

The general user consensus concerning the Dickies Kevlar socks is that they are durable and tough, yet comfy. One happy purchaser shares that these fairly casual socks are easy to get on, soft on the feet, fit as expected and don’t sag. He goes on to say that these are breathable socks that allow good air circulation and don’t pick up foot odor.

However, some buyers complain that the socks came with a hole. One dissatisfied buyer complains about the quality stating that they didn’t work well with steel-toed boots. 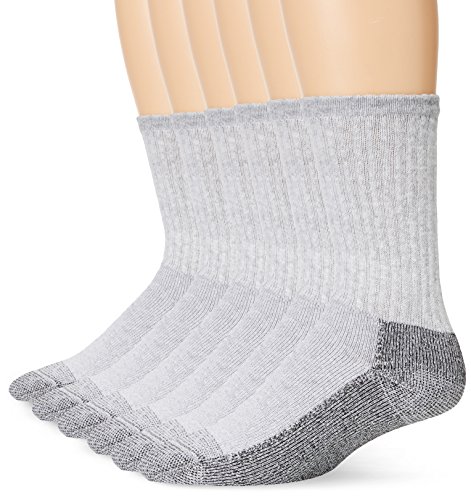 These Kevlar-reinforced crew socks offered by Fruit of the Loom are a solid option if you are looking for work socks. Users like that the socks fit well and are comfortable, but some do complain about them not being thick enough.

This product features 6 pairs of heavy-duty comfortable work socks with a cushioned foot and reinforced soles which are perfect for boots. They are made of 76% cotton, 22% polyester, 1% lycra spandex and 1% other fiber. They are available in two beautiful colors: white and grey. This set of reinforced work socks might be a solid choice if you are looking for Kevlar socks that fit men’s shoe size 6-12.

In general, users have a favorable opinion of the Fruit of the Loom Kevlar socks, saying that they are comfortable, not too thick nor thin. One user says that they last reasonably well. Another one shares that they are a good fit, not too loose or too tight on the leg.

However, some buyers complain that these anti-blister socks are not very thick and can’t be considered “heavy duty”. One dissatisfied user states that the cushioned socks aren’t actually heavily cushioned. 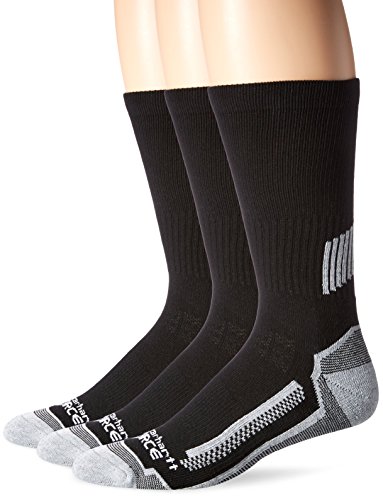 These men’s force performance work crew socks offered by Carhartt are a solid option for those who need anti-tear socks with reinforced heel and toe. Users like the quality and breathability of these moisture wicking socks, but do complain about them not being too comfortable.

This product features reinforced heel & toe, as well as racetrack mesh panels which provide ventilation to cool active feet. They are made of polyester (98%) and spandex (2%). These tear-resistant socks come in three colors (black, charcoal heather and white). If you are looking for Kevlar socks with stretch material for a contoured fit and ankle brace for full-motion support, this might be a good option.

In general, users have a favorable opinion of these Carhartt Kevlar socks and they state that this is a quality product with good breathability.

However, purchasers complain about the tightness around the calf. Some users state that the sizing on this product is way off making it too tight for everyday wear. 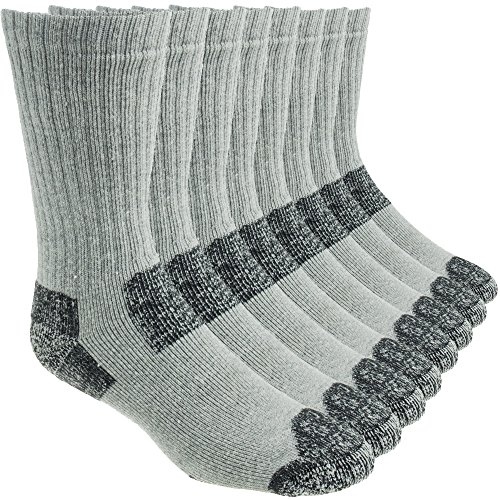 If you are looking for a top-rated steel toe crew sock, you might want to consider this 4-pack Kevlar socks offered by The Working Person’s Store. Users love this warm work sock for being thick and heavyweight yet comfortable, though one buyer complains of lint rolls that form on the sides.

This product features an extra thick padded heel and padded toe, as well as good arch support system. The socks are made of cotton, nylon, polyester and spandex and they are machine washable. This set of 4 pairs of men’s crew socks could be a good choice if you want a tear-resistant, warm work sock.

In general, buyers say that these are heavyweight and thick work socks that are very comfortable and fit very well. One online reviewer shares there is lots of cushion around the toes. Plus, ribs around instep and arch keep these anti-tear socks from bunching and promote circulation.

However, one buyers has a complaint regarding lint rolls that appear on the sides. 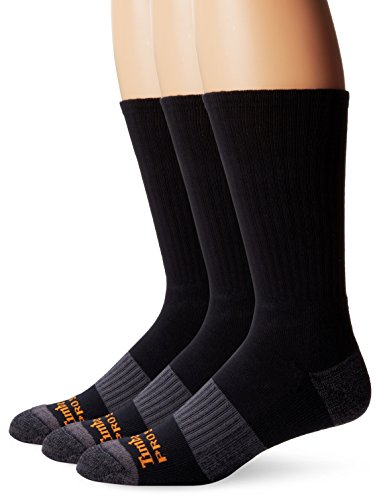 If you are looking for Kevlar socks, you might want to consider these heel and toe reinforced work crew socks offered by Timberland. Users love the long-lasting comfort that these thick and durable work socks provide, but some do complain about too small size and not thick enough sole.

This product is a pack of 3 pairs of 100% polyester, machine washable work anti-tear socks. The socks feature a reinforced heel and toe for durability and an arch support for circulation promotion. They are available in two colors, i.e. black and white. If you are looking for work socks with padded foot bed to wear all day, this might be a good option.

In general, users strongly recommend these Timberland men’s Kevlar socks, saying that they provide all-day comfort, fit very well and last long. Purchasers are happy that the socks don’t get cotton balls on them after washing nor shrink. One buyer states that they are durable, high quality, thick and super soft.

However, some buyers complain about the socks being a bit tight and not having a thick enough sole.

If you want to stay warm and keep your feet dry then you need to make sure your ideal socks are made of a blend of materials that will keep you warm and dry and provide additional comfort. There are many different durable materials socks can be made of.

Some of the synthetic materials used to make socks are: cotton, bamboo, and polyester.

Different types of materials are used to make socks to suit your needs- whether they're for taller socks, extra layer options, cold weather, to promote blood flow and blood vessels health.

If you are looking for socks for winter, make sure to get wool socks with a liner for winter. Wool is a natural insulator which makes it ideal for winter, providing superior comfort. Socks for winter also keep your feet warm and dry.

Socks are an imperative winter clothing item, especially for a winter hike. Boots and shoes are not enough on their own to keep your feet warm and dry during a winter hike.

If you want to survive a cold winter, you need to get them doubly thick with a liner for winter, washing them frequently because it fights odor and fungal infections.

Different people have different preferences when it comes to choosing their socks. With so many options, it can be difficult to decide which ones to get for your level of comfort. However, with some time and patience, you will find one. When choosing a comfortable sock, you need to make sure you get the right thickness and the right amount of cushioning. You want to keep your feet dry and your feet cool- so check weather they're designed for summer or winter weather.

The first durable pairs of steel toe crew socks re-examined is the Dickies Kevlar option. It's made from a blend of spandex, Kevlar, nylon and polyester- manufactured in the United States and machine washable.

It's marketed as a Kevlar-reinforced boot sock to help guard your heel and toe against abrasion and impact for extended durability. In addition, they are arch compression socks so that your feet are always tightly but comfortably bound with the Kevlar fiber.

The Fruit Of The Loom

The second quality pair of reinforced, heavy duty socks is manufactured by Fruit Of The Loom and they are built from polyester, Lycra spandex, and cotton. These reinforced work socks are marketed as odor resistant, extra-reinforced options with cushioned soles and spandex fiber to provide a contoured fit.

The third pair of work performance crew socks we examined as manufactured by Carhartt- they're built from a 98% polyester and 2% spandex- an imported option that is machine-washable with toe and heel reinforcement.

Carhartt markets them as odor-resistant with a proprietary fast-drying technology to ensure that perspiration is kept to a minimum, and your feet dry. Some other advanced features include polyester design elements, compression socks arch tech, reinforced toe and heel for extended durability and ventilation panels to decrease foot sweat. Buyers looking for work socks say that they rise high enough so that steel toe work boots don't painfully chafe their ankles.

The fourth option we examined is the Working Persons gray steel-toe crew socks- they're built from a cotton, nylon, polyester and spandex blend, made in the United States, and are machine washable.

The last pair of reinforced work socks we examined is the polyester Timberland option- they are imported, machine washable and feature enhanced arch support as well as reinforced toes and heels. Users report that the blend is 35% acrylic, 3% elastane, 5% cotton 12% nylon, 31% wool and 14% polyester.