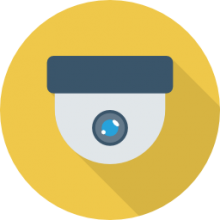 They hide in plain sight, enabling you to effectively monitor your home or business undetected (Source).

There are a bunch of these covert spy smoke detectors on the market- and buyers say that a lot of them are total junk (Source).

The best option we've seen is the Camakt WiFi IP Smoke Detector Camera. It is a true wireless option, working through an app. As well, it can work off of AC or battery power- which is a convenient feature because many options are only battery-powered, so you'd have to constantly remove the smoke alarm for recharges.

​As an aside, some of these covert cameras actually detect smoke- the Evertech and eDigitalDeals options. But they both lack the robust feature set of the Tangmi UFO-style camera fire detector. 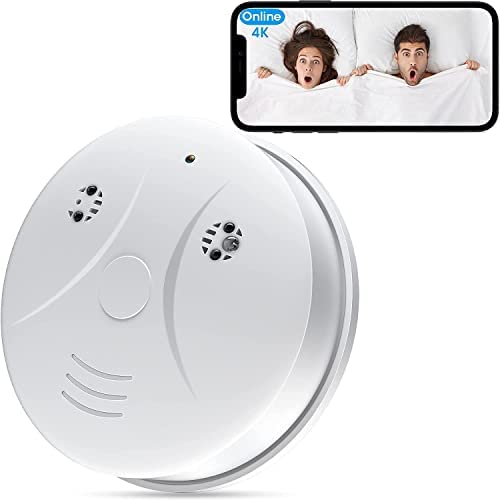 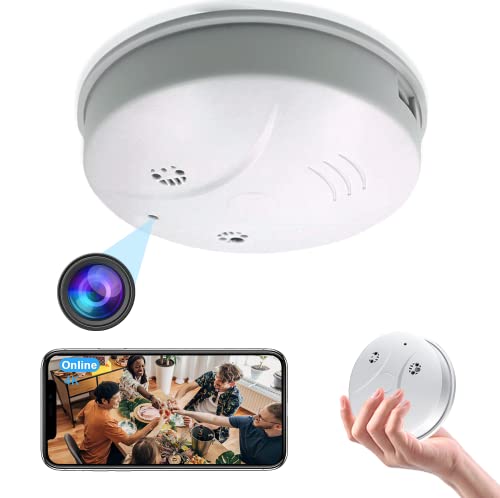 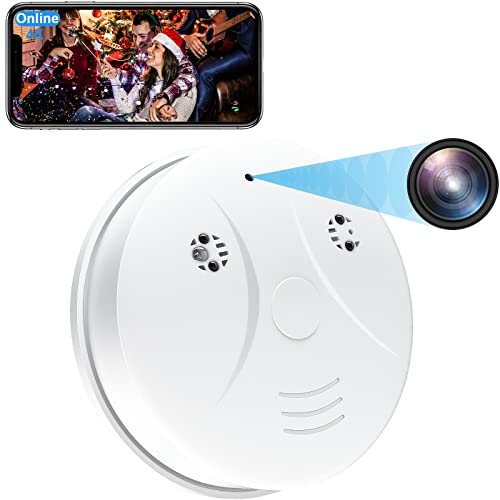 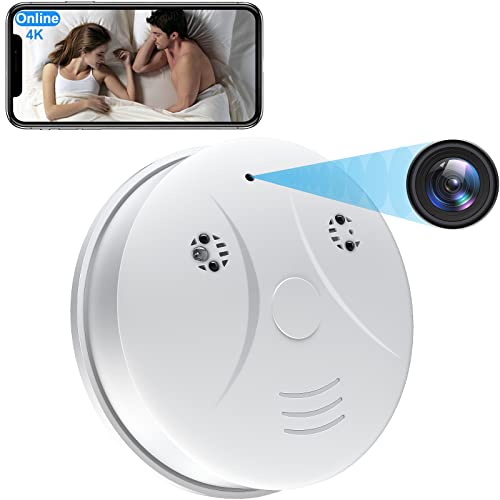 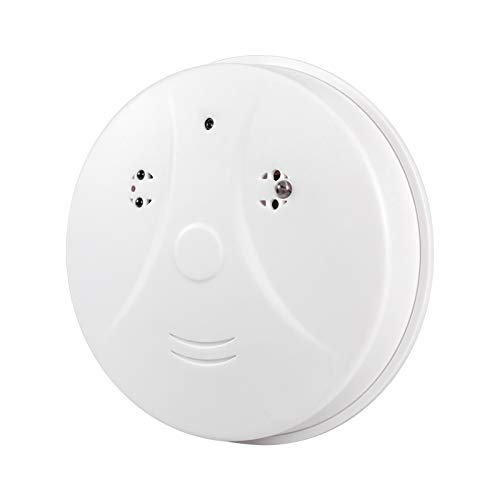 You can connect it to a LAN network via a client access point and then access it through a smartphone, tablet or desktop computer. It shoots in high-def video resolutions of 1,920*720 & 1,080*1,280).

Buyers tell us that you'll want to give it a full charge before using it if you want continuous recording capability, with reviewers telling us that it can work up to 15 hours before requiring a recharge.

It features a motion-detection mode, but doesn't have night-vision, so you'll want to use it in areas that are relatively lit, or in conjunction with a security light.

The camera provides 90° viewing and ships with a mounting base, 2 screws, instruction manual, a software CD, power supply, and a micro USB cable.

This hidden smoke spy camera offered by Tangmi is well-designed, reliable, and easy to install on the ceiling or the wall. Users love the quality of the video, but some do note that there is no night vision.

The Tangmi smoke spy detector measures 4.5” x 4.5” x 3.9”, and it features P2P connection, an HD resolution (1080P/720P), real-time monitoring, which is great because you can observe your house from anywhere, and a weight of 9.6 ounces. This hidden camera supports IOS and Android for iPhones and Windows/ Mac for PC. You can use 32GM micro SD card (not included), and the package also includes a USB cable, a battery charger, a CD, and a user manual.

In general, users are impressed with the performance and the design of the Tangmi hidden sky detector. A reviewer observes that the wireless smoke camera is solidly built and that the picture is very clear and bright.

He adds that he bought two of these detectors and that they performed far beyond his expectation. But he warns that it’s slightly tricky to set it up. Another buyer comments that the camera is well-hidden inside the detector and that you wouldn’t know it’s there.

A user says that the smoke spy detector camera can work several hours in motion sensor mode when fully charged and that he highly recommends it. He also states that the customer support is excellent and that they solved his technical issues.

*This item is often 'white-labeled', so the camera in the video is the same as the Tangmi, but is marketed under different brand names. The product we're linking to doesn't have the branding element the reviewer criticizes in the video.

If you want a well-hidden spy camera, you might take a look at this fake smoke detector offered by eDigitalDeals. Users love the elegant design, but some do note that the detector is made in Korea.

The Sony Super spy smoke detector measures 2.4” x 5.4” x 6.2”, and it features 3.7 mm hidden pinhole lens, a razor sharp resolution ( 620TVL), a 1/3-inch Sony sensor, a blinking red indicator, and a weight of 10.6 ounces. A great feature of this spy camera is that it’s also a functioning smoke detector, and it has a three-year warranty.

A buyer shares that he didn’t encounter any difficulties while setting up the smoke spy camera and that the customer support is excellent. However, he warns that there is no slot for SD card and that you need a DVR for the detector to work.

Nevertheless, he highly recommends this smoke detector camera and mentions that he would gladly buy it again. Another reviewer states that the picture quality is excellent and that the spy smoke camera is well-made and hardly noticeable. However, he points out that it has a narrow view.

The smoke spy camera offered by Aperfect is efficient, hard to spot, and you can record and charge it at the same time. Users love the real time video and audio feature, but some do note that the battery doesn’t last as long as they expected.

The Aperfect spy smoke detector measures 5.2” x 4.8” x 2.4”, and it features 720 x 480 video resolution, 20 ft motion detecting range, an internal rechargeable Li-ion battery that you can recharge for 4 hours, and a weight of 7.2 ounces. Another great thing about this hidden motion camera is that it comes with an 8GB micro SD card (supports up to 32 GB) and the package also includes a remote controller, a user guide, and a USB cable.

A reviewer comments that this hidden spy camera looks just like a smoking detector and that no one would suspect a thing. He observes that the resolution is great and that he doesn’t have any problems installing or operating the camera. He highly recommends it as the best smoke detector camera.

Another user adds that the motion activated detector works exceptionally well when it’s charged and that the instructions are easy to follow and comprehend. He warns that the video is not something special, but it gets the job done and that it’s fun to watch the playback.

This spy camera detector offered by Evertech is inconspicuous, efficient, and it functions both as a hidden camera and a smoke detector.

Users love that the camera is easy to mount, but some do note that it’s overpriced. The Evertech real smoke spy detector measures 5.9” x 5.9” x 4”, and it features a built-in microphone for audio, 3.7 mm lens for a wide 90-degree angle, a horizontal resolution of 700 TVL, and a weight of 7.2 ounces. Another great feature of this hidden camera is that you can set it up with TV, VCR, or PC with AV or as a part of your DVR system.

In general, buyers have a mixed opinion regarding the Evertech real smoke detector camera, and they agree that the design needs improvement. A purchaser comments that the package doesn’t include the necessary 12 V adapter and that you’ll have to purchase a power source if you want to use the camera.

Another reviewer also observes that the spy detector works well in well-light places, but the picture won’t be clear in low light. However, he stills finds it reliable and useful for monitoring his home and office. A buyer adds that the quality of the video is perfect and that the camera does its job.

However, according to the reviewer, the smoke spy camera looks old-fashioned, and it’s not inconspicuous.

If you are wondering how to secure your home, you might take a look at this hidden spy camera offered by Votecom. Users love that the camera is full HD, but some do note that the lenses are fixed.

The Votecom wireless spy detector camera measures 5.4 x 3.5 x 3.6 inches, and it features 78-degree lens, a full HD 1080P, continuous video recording, motion triggered video recording, a remote control, a USB cord, and a  weight of 8 ounces. Another great thing about this camera is that you can sync time with your PC to show accurate time stamps. Moreover, you can record up to 16 hours after fully charging the battery.

A reviewer mentions that the hidden wireless camera is easy to set up if you follow the directions and that it has been working quite well for months. He adds that it’s perfect for a nanny cam and that he highly recommends it as one of the best smoke spy cameras available.

Another buyer comments that she was impressed with the quality of the video and the photos and that it’s easy to connect it to your computer. But she warns that there is a light indicator which might make it noticeable. A user also observes that the spy camera detector is made of quality materials and that it can really work up to 16 hours when fully charged.

However, one customer has complained that the sound quality is horrible and that it’s very hard to set time/date on the device due to the unclear instruction.

The first spy camera smoke detector we looked at was manufactured by Tangmi. It is a wireless option that is marketed as an IP network monitoring solution that can be connected to your tablet, smartphone or desktop computer- providing a covert, home surveillance solution.

It provides HD resolution-1920*1080 and 1280*720. It's an android and iPhone-compatible wireless spy camera that can run off of AC or battery power.

It is a motion-activated option that works off of battery power that the manufacturer claims lasts 1.5 hours with a charging time of four hours.

Buyers were overall fairly impressed with this option, saying that it looks exactly like a real smoke detector. In addition, it provides high-resolution video recordings.

The third hidden camera spy detector we examined was the motion-activated Votecom. It's marketed as a covert and discreet way of conducting home surveillance, mounting on the walls and ceilings with screws.

The manufacturer says that it doesn't have a wide lens, which means that it will only video record what is directly in front of it.

As well, it features loop recording capabilities when it is in the continuous recording mode- this means that older files are deleted to make space for new video files. The manufacturers say that this discreet fake smoke detector provides wireless surveillance capabilities with a 78° field of view lens.