Automatic hose reels can be an attractive and efficient storage and hose maintenance solution for gardeners (Source).

Automatic hose reels can be either spring, water, or battery-powered (Source).

While these can be h﻿assle-saving garden tool﻿s, many of the hose reels lose winding power over time and their components often don't hold up for more than one season (Source).

We found one clear winner without consumer complaints about breakdowns or diminished power: the Powerwind, the only battery-powered automatic hose reel we reviewed.

Our Top Pick: The Suncast Powerwind 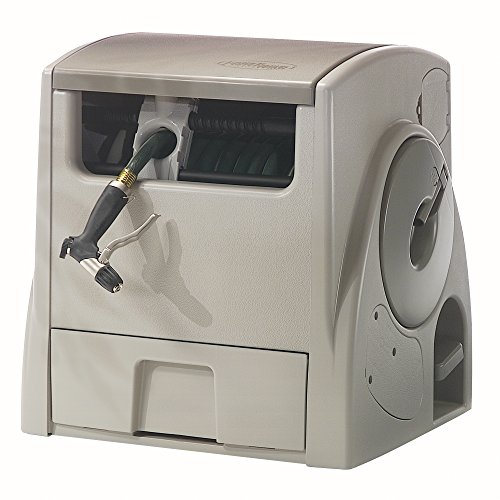 The Suncast automatic hose reel has a 100' hose capacity. It includes a foot pedal function, so you don't need to lean over to retract your garden hose. It ships with a rechargeable battery and charger and arrives fully assembled.

Buyers have advised us- while it is winding up, you can't step away. It's best to monitor the hose retraction so that it retracts into the housing without kinks. ANd you'll want the hose to be drained of water before initiating the hose retraction.

Reviewers have also told us that a single battery charge can last an entire summer- pretty convenient. Though, if you place it in a communal area, people are prone to use it as a seat- and it's certainly not rugged enough to endure that!

Let's take a look at some of the best-selling automatic garden hose winders. 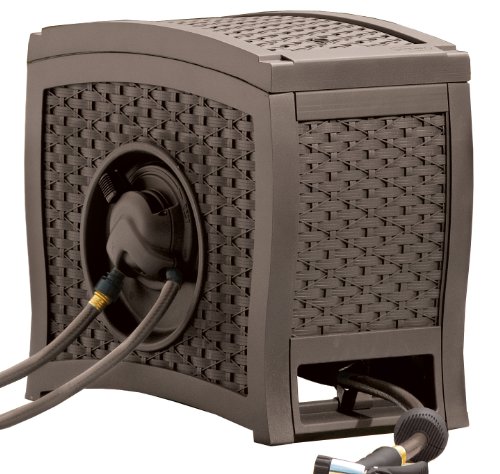 The Suncast Aquawinder is a hose reel with a 125-foot capacity. Its auto reel is hydro-powered and the housing is an attractive brown wicker.

To work effectively the Suncast needs to be attached to the patio, the ground or your deck- two pegs are shipped with your Suncast for ground installation. Some users complained of cheaply made hose connectors and found it especially difficult to secure the unit to the ground.

There’s some mixed feedback for this particular option. One buyer, who explained that he suffers from debilitating back pain, said that he constantly was forced to leave his garden house out for another person to re-wind by hand. Now, he says, all he has to do is use a switch, which is quite simple to do, and the Aquawinder sucks up the hose.

Another user, however, had a more negative experience. One buyer we spoke with said that the product may seem like a wonderful idea, but it did not work well. This buyer said that he attempted contacting customer care and studying the instruction manual again and again but could not get the water to actually emerge from the hose.

Another issue, this buyer explained to us, because this is a hydro-powered option, and there aren’t any handles, to be able to wind the hose, the 2nd outlet hose will release water. If you’re using a really long hose, think 100 feet, this will release a ton of water. If you don’t like water waste this could be an issue for you. 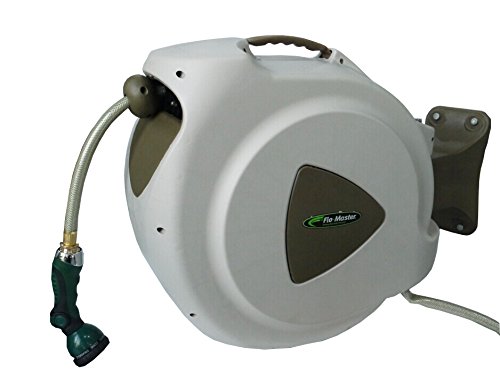 The RL Flo-Master is a 26 lb retractable hose reel that can house 65 feet of 5/8″ hose. It comes with a mounting bracket that swivels 180 degrees.

Unfortunately, many buyers have had negative experiences with this option. One user we spoke with said he was highly disappointed.

He used it once every weekend the very first month and it worked well. However, on the fifth weekend, he said he switched the water on and the reel itself began leaking water from its bottom. It wasn’t too awful at first, so he was not initially concerned because so many of these garden tools develop drips as time passes.

Around the sixth weekend, however, when he turned the hose on a steady flow of water ran from it, and to complicate matters, it was very rusty water splashing from the bottom. Many buyers echoed these concerns- even more frustrating was that the defects appeared after the return window, which for Amazon is 30 days, and for the manufacturer itself, according to some buyers, is 60 days. 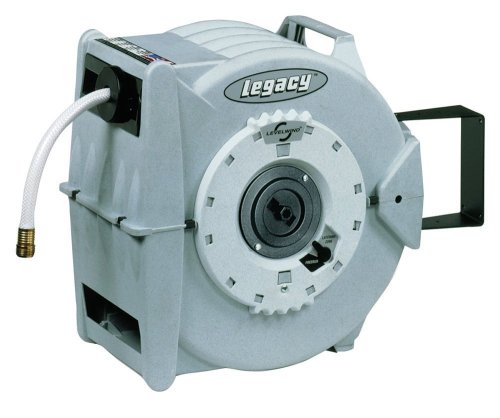 The Legacy Levelwind is a 25 lb, wall-mounted automatic hose reel that comes in several different hose storage capacities, 50, 60 and 75 feet. It ships with a hose that meets the Levelwind’s specifications. An internal spring helps automatically reel and layer the hose for an even coil. The wall mount can be fixed into seven different positions and it can also be placed on the ground with its flat base, but it must be secured to the ground. As with many of these automatic hose reels, user experience varies with some people saying that their unit remains excellent and durable, others saying that it gradually wore down and lost its reeling strength.

The Suncast Powerwind is a 100-foot capacity, battery-powered hose reel that weighs 28 lbs, hose not included.

It can auto-reel a 50-foot hose in 30 seconds, reports one user. Another user reports that the battery held a charge for an entire summer before it had to be recharged. By far, this appears to be the most effective and popular option among the different automatic, rewinding garden hose reels that we have examined.

Once broken in, and with some commonsense upkeep over time, this can be a long-lasting option. 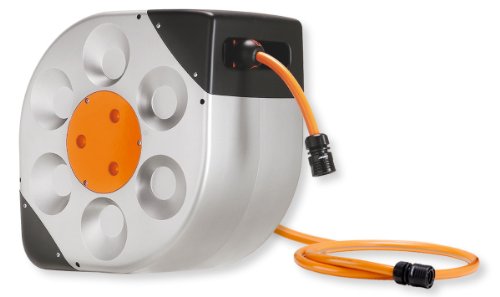 The Claber Rotoroll is a wall-mounted, spring-loaded hose reel that can house 66 feet of half-inch hose. It weighs 23 lbs and comes with a hose included.

​​You'll be able to tell quite a lot about landscapers from the circumstance of their hoses. Expert home gardeners understand that a hose is a vital horticulture tool. They are fully aware it should be taken care of and stashed correctly to effectively enable it to hydrate their lawns and gardens for a long time.

No garden enthusiast needs the annoyance of a twisted or damaged hose, the water waste of a dripping hose, or the hazard of falling over a tangled hose.​ ​Correctly taken care of, a hose will last for a long time.

Appropriate upkeep usually means storing the hose somewhere nearby following every use. Whenever you place the hose away it is less inclined to get to be permanently damaged, get shredded by a garden tractor, turn into a falling hazard, or decay from garden soil moisture.​

​Easy storage systems like these automatic hose winders allow it to be an easy task to stash a hose away. You merely turn a crank to wind up and reel in the garden hose. A garden hose container, which is part of a electric garden hose winder, is really a sensible and eye-catching method to wrap up a hose and store it correctly out of view.

Another method landscapers use is garden hose hangers that adhere to the side of your house or garage area are typical safe-keeping alternatives.​ ​

The style of the garden hose hanger distributes the burden of the garden hose consistently, eliminating the risk of developing kinks that you would get from dangling a hose over a nail. No matter how you stash your hose, make sure you keep it out of the sunlight.​ ​Clear all the water and take away any accessories before you decide to stash a garden hose aside for the winter months.

Despite the fact that open ends accommodate enlargement and shrinkage of freezing water, this fluctuation can actually diminish the material of the water hose.​ ​Exchange washers at the first indication of a leak or drip appearing. Some landscapers invest in new washers each and every springtime merely as a seasonal precaution!

Apart from becoming messy, a leaking garden hose is a waste of valuable water.​ ​Despite the fact that garden hose reels and other similar home and garden products perform the reeling, it really is an invaluable talent to be capable of coiling a hose on your own.

The best way to coil

1. Switch off water to the garden hose.

2. Support the garden hose several ft from your faucet.

3. Flex a hose loop- around 3 ft in diameter

4. Maintaining your hands on the water hose, get to a ft . or two further away from the faucet and then make one more loop in the identical direction of the first loop. Bunch the 2nd hose loop over the 1st.

5. Create coils and bunch them together with one another until the whole water hose is rolled up.

A garden water hose is at least as essential as a folding shovel, a leaf rake, or a sprinkler. Handle it appropriately and it'll benefit you.