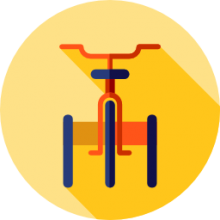 Adult tricycles are great way for individuals with balance issues, or people who just enjoy the added stability of a tricycle, to enjoy open road cruising with friends and family.

There are actually a surprising number of different styles of adult tricycles, which include the semi-recumbent, folding, electric, and even the chopper tricycle style.

While these tricycles are sturdy and pretty high-quality, one common complaint is that they can be exceptionally difficult to assemble.

We recommend having someone do it for you, perhaps a bicycle repair shop, and avoid the hassle of assembly altogether.

Let's take a look at five of the best-selling adult tricycles on the market today and see how they compare.

What is a tricycle?

In a nutshell a tricycle, which is often referred to as a trike, is a vehicle with three wheels. While we have written extensively here about adult tricycles, most people are familiar with tricycles as vehicles for children who require the additional stability before they move on to two wheel bicycles.

Tricycles are generally made of metal with one rubber wheel upfront and two rubber wheels in the back.

Tricycles have evolved over time- there used to be many different sorts that no longer exist.

Adult tricycle's for individuals with disabilities are a recent innovation that enable people are often semi-paralyzed to still enjoy the pleasures of open-road cruising.

The modern design of these three-wheeled vehicles enable individuals to easily mount and dismount them, which distinguishes them from bicycles which can be difficult for elderly or disabled people to get on.

They easily accommodate people with balance issues because when you stop riding the tricycle you can easily and comfortably place both feet on the ground, ensuring that you don't tip over and fall.

When considering a tricycle to purchase check out the different styles available, may consider having it assembled for you and avoiding the painful hassle of its construction.